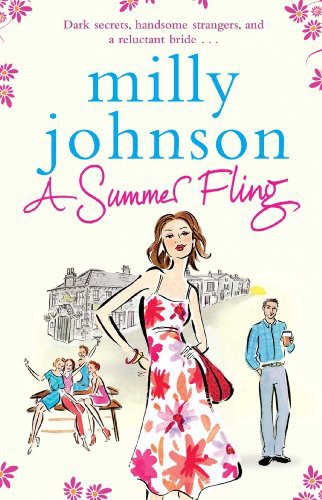 Milly Johnson is a half-Scots, half-Sassenach author who lives in Barnsley, South Yorkshire with her two sons, a squadron of cats and Teddy, her German Eurasier pup.

She is also a very proud Patron of Haworthcatrescue.org and promoter of their £2 million appeal to build a cat re-homing centre. All donations gratefully received.

This book is copyright under the Berne Convention.
No reproduction without permission.
® and © 1997 Simon & Schuster Inc. All rights reserved.
Pocket Books & Design is a registered trademark of
Simon & Schuster, Inc.

The right of Milly Johnson to be identified as author of this work has been asserted by her in accordance with sections 77 and 78 of the Copyright, Designs and Patents Act, 1988.

This book is a work of fiction. Names, characters, places and incidents are either a product of the author’s imagination or are used fictitiously.

This book is dedicated to six fabulous women who inspired this book.
To Nancy Scrimshaw, Sheila Isherwood and Mary Sutcliffe, who taught me that age is no barrier to friendship, laughter or fun, especially when eating illegal mince pies in front of a Yorkshire range.
And to my SUN Sisters: Pam Oliver, Helen Clapham and Karen Baker. Life would not be the same if we didn’t share our stories about work, men – and what some of us have done on a mountain.

‘To love and be loved is to feel the Sun from both sides.’

After only three words of Malcolm’s speech, Dawn tuned out. She didn’t want to listen to his monotonous voice. Nor did she want to think about old people retiring from Bakery departments. Her head was too full of confetti and honeymoons and she was counting down the hours until tomorrow morning, when she would finally be choosing her wedding dress.

While Malcolm was still droning on about being at the end of an era and raising his thick polystyrene cup full of cheap white wine in Retiring-Brian’s direction, she was calculating how long it was to her big day.
Eighty-four days, eighteen hours, eleven minutes and forty-three seconds, forty-two seconds, forty-one sec
onds.
Every tick of the clock brought her one tiny step closer to being Mrs Calum Crooke.

People were clapping now, so Dawn joined in to make it appear that she was part of the celebrations. Malcolm was smiling, she noticed. Crikey. Fourteen million more of those and he’d have a wrinkle. Probably wind, thought Dawn, watching Malcolm’s face return to its normal ‘pissed off with the world’ cast. Mind you, he
was
very pissed off with the world at the moment. He had presumed, as Deputy Head of Bakery, that he would jump straight into the top slot when Brian retired. He wasn’t best pleased to find out he was being shunted over to Cheese and the new Head of Bakery was going to be an unknown outsider that the MD, Mr McAskill, was bringing in.

That he was going to be ‘Cheese Head’ and no longer a deputy, didn’t do much to take the edge off his disappointment. Bakery was growing and secure, Cheese was sinking. Rumour had it that Mr McAskill was in the process of phasing it out totally. And Cheese was an entirely male department, unlike Bakery, which would now be all female. There would be far less opportunity to look down blouses or sidle up closer to his co-workers than he should do by the photocopying machines. Dawn shuddered as she remembered feeling his hand on her bum on her first day in the department. He’d said ‘whoops’ and left it at that, but she’d known it was deliberate. She had kept herself out of his way as much as possible after that.

Raychel stood alone, swilling the awful wine around in her cup. She was a natural wallflower, most comfortable against the sidelines. She felt awkward in social situations like this, but also she felt obliged to stay behind after work with the others and wave Brian off. He was an affable enough man, and talking about spending the summer in a caravan with his wife, a new microwave and his Cairn Terrier, Lady, was probably the most animated she had seen him since she joined the department late last year.

When she heard that Brian was leaving, she’d presumed that Malcolm would take over as boss, seeing as he had been acting more or less as Head anyway. She had started looking at the noticeboard for any up-and-coming jobs within other departments then. She didn’t like Malcolm one bit. He was too touchy-feely for her liking, using any excuse to have skin-to-skin contact and Raychel hated to be touched by anyone – except her husband Ben. She hadn’t told Ben about Malcolm and his inability to understand the concept of ‘personal space’ because he would have been down at the office like a shot to sort the little squirt out. So she was delighted and as surprised as the other three women in the department to hear that Malcolm was being moved to Cheese, and that Grace – the oldest lady in the department – was being made Deputy. The big boss, James McAskill, was bringing in a woman from outside as Head of Bakery, which had got the tongues wagging.

Not that Raychel had discussed any of this with her co-workers. They had all been in the same department for ages now and hadn’t progressed beyond the ‘morning, nice day’ or ‘have a good weekend’ stage – give or take a bit of work talk. They were nice enough women, all different ages though. And now there was going to be another woman amongst them. Raychel wondered how all these changes would affect the dynamics of the department, but it didn’t really matter that much. Work was a place to get her head down and earn a crust, nothing else.

Anna gave Brian a big kiss on the cheek. As bosses went, he was a nice man who just couldn’t be arsed any more, if the truth be told. His retirement had been long in his sights and he had let Malcolm take over most of the running of the department. Thank goodness that creep was leaving as well. He hadn’t been at all happy about his move to Cheese though, that was obvious. Actually he was a miserable sod at the best of times. It was as if he had a row with his wife every morning and was intent on polluting the office air with a bad mood. He was always so rude to his underlings. ‘Please’ and ‘Thank you’s didn’t feature in his vocabulary and he would bark ‘tea’ at any of them when he wanted a drink. Plus she hated the way his eyes flicked to her breasts when he was talking to her. She wondered what sort of woman found him attractive enough to marry him. But apparently he could sustain a relationship: he had been married for over fifteen years, which is more than she could say for herself.

Anna listened to Brian getting all excited about spending the summer in a caravan on the coast and she envied him that enthusiasm for something. She had not one single thing to look forward to this weekend or after. She couldn’t get interested in the storylines of
Coronation Street
, didn’t fancy anything particular to eat, had lost the ability to lose herself in a book and knock out the image of her fiancé bonking the nineteen-yearold hired help in his barber’s shop. Life stretched before Anna – longer, greyer and wetter than the entire British coastline in February.

‘You next, with any luck!’ said Brian in her ear hole.

‘Wha . . . at?’ said Grace, before quickly recovering. ‘Oh yes, maybe.’
God forbid.
The thought of standing where Brian was now, admiring her own clock, being toasted in warm plonk, brought on a cold, clammy sweat at the back of her neck. She came over ever-so-slightly faint.

‘I just can’t understand why you’d want to up the ante when you’d got the chance to leave this place and live a life of leisure. Could have been your retirement do as well,’ said Brian with a smile.

‘Oh well, you know me, I like a challenge,’ said Grace. She had worked with Brian for just over three years now and liked his merry ways, even though he was a man who was born old and was just happily growing into himself. He would
so
enjoy not having to set his alarm clock any more and spending his days pottering around busily doing nothing. Apart from his cheery disposition, he reminded her so much of her husband Gordon – too much for comfort, as he prattled on about the joys of retirement.

Grace’s thoughts drifted off. Did Brian ever think when he was seventeen and in the dance halls that he would one day be standing here, getting excited about taking a new microwave to Skegness? Was that the zenith of his ambition? Or was Grace not normal in being the same age as him and panicking every time the word ‘caravan’ entered a conversation? She’d done the caravan thing when her three children were small and they had enjoyed it, even though she herself had found it far from relaxing as a choice of holiday. The children were adults now but she was still very close to them and didn’t want to spend weeks and weeks away from them and her grandchildren with only Gordon for company.

The Conversations (New Directions Paperbook) by Aira, César
Die for the Flame by William Gehler
A Father for Her Triplets: Her Pregnancy Surprise by Susan Meier
Predator by Terri Blackstock
The Positronic Man by Isaac Asimov, Robert Silverberg
The War Chest by Porter Hill
The Secret of Spring by Piers Anthony, Jo Anne Taeusch
Dragon Business, The by Kevin J. Anderson
The Troven (Kingdom of Denall Book 1) by Eric Buffington
The Pillow Book of Lady Wisteria by Laura Joh Rowland
Our partner