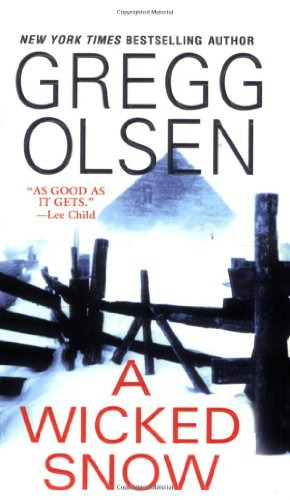 Praise for
A Wicked Snow

"I loved this book. Real narrative drive, a great setup, a gruesome crime, excellent exploitation of another-worldly location, fine characters... As good as it gets."

"Olsen writes a real grabber of a book. If you're smart, you'll grab this one!"

"A compelling story, tightly woven, that kept me riveted to the final page."

"An irresistible page-turner. The suspense builds and builds until the heart-pounding finale."

"A top-notch thriller, a powerhouse of a book. You will not put this suspenseful, engrossing book down."

"Olsen knows the dark currents that can flow beneath family secrets and has crafted a mesmerizing thriller."

"Olsen is a top-notch writer."

"Olsen tells the story in a mesmerizing manner that leaves the reader both haunted and fascinated by what they have read."

"A compelling and fascinating tale of family psycho-pathology taken to the extreme; a real page-turner."

"Olsen is a ferociously talented writer."

"A very sexy book that is as disturbing as it is seductive."

--Darcey O'Brien
(on
Confessions of an American Black Widow
)

If Loving You Is Wrong

Confessions of an American Black Widow

For Susan and Michaela

On the Oregon farm she ran,

"Come out West and we'll marry."

But just how many did she bury?

The girl remembered the snow and the evil that had come with it. She shuddered at the very idea of the velvety white shroud over a mountaintop--the drifts of cream around fence posts on the country lane of a Christmas card. For many, such images brought to mind the beauty of the winter season and the holidays that hang from a frosty bow. But not for her. It wasn't just the snow, of course. It was what came with it. Whenever she saw or felt the cold heart of winter, she thought of her mother.

A snow scene brought a thumping of her heart and the shadowy image of a woman in wine-colored cover-alls and a navy-blue down-filled vest. Vapors formed a halo around the woman's head, though the girl knew the irony of the image. She knew it was her mother. And her mother was far from an angel in every way that could be imagined. The face, however, was blank in her memory. The girl was unsure what color eyes her mother had or if her nose was straight or slightly crooked like her own. She knew their coloring was the same, but nothing more. Nothing she could swear to. She had done a good job of trying to forget just what her mother looked like. She stopped wondering if, as she approached her mother's age,
she
looked like her. In her mind's eye, the girl's mother was bent over doing something in the snowy dark of a nighttime long ago. Pink bloomed on a white blanket.
What was it?
The girl allowed herself to try to peer into the space just beyond her mother's shoulder. She strained to see. She wanted to tap her, to get her attention.
Why are we doing this?
But no action, no words came. And then, the fleeting image evaporated like the smoke from a candle.

The girl would grow into a woman. She'd marry. She'd become a mother herself. Yet she'd hold everything inside. She'd tell no one. What happened could be squeezed from her brain only by the force of her considerable will. She alone could release it. Still, she took no chances. She'd live a life away from the snow that chilled her heart and brought tears to her eyes. She'd keep a house free of powdered sugar, white granular laundry detergent, and anything else that reminded her of the icy darkness that she fought so hard to forget. No snow globes from airport gift shops. No ski trips to Vail. Nothing to trip a memory from rearing its breathless visage and reminding her of what she knew she had to forget.

BEFORE IT PUT US ON the map, we were a county known for tight-grained lumber and the finest run of Chinook that the Northwest had ever seen. Our schools were good; our roadways safe. But a decade after the incident, we're left with a reputation that belies our hearts and our way of life. For Spruce County, this has gone on too long. It is time to bury this story and move on. We urge a "no" vote on the annexation of the Logan property for a possible public park and memorial.

Searching for Secrets by Elaine Orr
Stand (Black Addiction Book 3) by T Gephart
The Awakening Evil by R.L. Stine
Sculpting a Demon by Fox, Lisa
Precious Blessings (Love Inspired) by Jillian Hart
A Curable Romantic by Joseph Skibell
Odium II: The Dead Saga by Riley, Claire C.
Love in the Vineyard (The Tavonesi Series Book 7) by Pamela Aares
Roundabout at Bangalow by Shirley Walker
Under the Influence by Joyce Maynard
Our partner