Read A Year with Aslan: Daily Reflections from The Chronicles of Narnia Online

A Year with Aslan: Daily Reflections from The Chronicles of Narnia 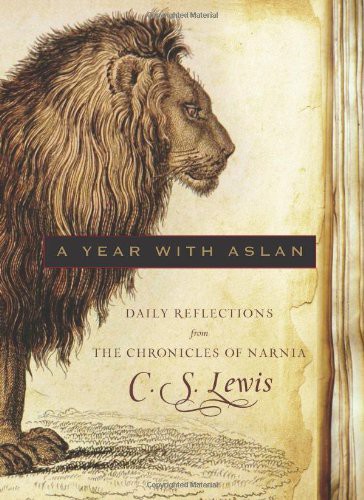 Daily Reflections from
The Chronicles of Narnia

Some books are fun to read. Rarer are those volumes that still delight us upon rereading. And then there are those rarefied species of books, those that we read, read again, and again, and keep reading. In fact, a part of us never really leaves the story. They become part of the geography of our souls, the landmarks by which we map and measure our lives. At least that has been my experience with C. S. Lewis’s Narnia books. Unlike most, I missed them completely when I was the right age to begin and only discovered them in college. And so my cycle of reading began. Especially helpful was the cover I was given by having two daughters who pleaded with me each night to read the books to them. “Well, if you insist.” Still, forever after, unbidden, and at all the right moments in my life, I saw Eustace struggle with his dragon skin, Digory debating obedience to Aslan versus saving his mother, Lucy chastising herself for sticking with the group even after she saw Aslan, Edmund facing his shame after his rescue from the White Witch, or Tirian and Jewel racing up Aslan’s mountain laughing while the dwarves think they are still in a dark hut.

We have created this volume for all those similarly haunted. Each day for a whole year brings an episode from anywhere in the seven volumes of the chronicles, an isolated story or scene that provides both delight and nourishment, an opportunity to reflect and deepen our experience of this landscape of wonder (with questions at the bottom of each selection for those who appreciate a nudge in a particular direction). I grew up in a tradition that encouraged a daily practice of reading and reflection as a spiritual workout, and we often heard admonishments for why we had to will it earnestly and overcome our natural resistance to this vital practice. (In other words, it was presented as the spiritual equivalent of “eat your vegetables.”) Yet this led me to the unexpected query,
But what if I enjoyed it?
Follow that line of thought and you will arrive at the very logic and purpose of this book.

We need to pause and thank Julia Roller, who selected the readings and drafted the questions; Cynthia DiTiberio, the editor at HarperOne who captained the project as well as Drinian guided the
Dawn Treader;
and, finally, to the C. S. Lewis Company, who graciously allowed us to play in this field. And now, for everyone else, “Further up and further in!”

The Creation of Narnia

F
AR AWAY
, and down near the horizon, the sky began to turn grey. A light wind, very fresh, began to stir. The sky, in that one place, grew slowly and steadily paler. You could see shapes of hills standing up dark against it. All the time the Voice went on singing. . . .

The eastern sky changed from white to pink and from pink to gold. The Voice rose and rose, till all the air was shaking with it. And just as it swelled to the mightiest and most glorious sound it had yet produced, the sun arose.

Digory had never seen such a sun. The suns above the ruins of Charn had looked older than ours: this looked younger. You could imagine that it laughed for joy as it came up. And as its beams shot across the land the travelers could see for the first time what sort of place they were in. It was a valley through which a broad, swift river wound its way, flowing eastward toward the sun. Southward there were mountains, northward there were lower hills. But it was a valley of mere earth, rock and water; there was not a tree, not a bush, not a blade of grass to be seen. The earth was of many colors; they were fresh and hot and vivid. They made you feel excited; until you saw the Singer himself, and then you forgot everything else.

It was a Lion. Huge, shaggy, and bright, it stood facing the risen sun. Its mouth was wide open in song and it was about three hundred yards away.

What do you think it is like for Digory, Polly, and the others to stumble upon such a scene? Have you ever stumbled upon a scene of such wonder that it was hard to fathom? How did you react?

Their Own Secret Country

T
HE STORY BEGINS
on an afternoon when Edmund and Lucy were stealing a few precious minutes alone together. And of course they were talking about Narnia, which was the name of their own private and secret country. Most of us, I suppose, have a secret country but for most of us it is only an imaginary country. Edmund and Lucy were luckier than other people in that respect. Their secret country was real. They had already visited it twice; not in a game or a dream but in reality. They had got there of course by Magic, which is the only way of getting to Narnia. And a promise, or very nearly a promise, had been made them in Narnia itself that they would some day get back. You may imagine that they talked about it a good deal, when they got the chance.

—The Voyage of the
Dawn Treader

What does having a place that you dream about, whether real or imagined, do for you? Have you been able to retain that sense of imagination and dreams in your adulthood?

A
ND SHORTLY AFTER THAT
they looked into a room that was quite empty except for one big wardrobe; the sort that has a looking-glass in the door. There was nothing else in the room at all except a dead blue-bottle on the window-sill.

“Nothing there!” said Peter, and they all trooped out again—all except Lucy. She stayed behind because she thought it would be worth while trying the door of the wardrobe, even though she felt almost sure that it would be locked. To her surprise it opened quite easily, and two moth-balls dropped out.

Looking into the inside, she saw several coats hanging up—mostly long fur coats. There was nothing Lucy liked so much as the smell and feel of fur. She immediately stepped into the wardrobe and got in among the coats and rubbed her face against them, leaving the door open, of course, because she knew that it is very foolish to shut oneself into any wardrobe. Soon she went further in and found that there was a second row of coats hanging up behind the first one. It was almost quite dark in there and she kept her arms stretched out in front of her so as not to bump her face into the back of the wardrobe. She took a step further in—then two or three steps—always expecting to feel woodwork against the tips of her fingers. But she could not feel it.

“This must be a simply enormous wardrobe!” thought Lucy, going still further in and pushing the soft folds of the coats aside to make room for her. Then she noticed that there was something crunching under her feet. “I wonder is that more moth-balls?” she thought, stooping down to feel it with her hand. But instead of feeling the hard, smooth wood of the floor of the wardrobe, she felt something soft and powdery and extremely cold. “This is very queer,” she said, and went on a step or two further.

Next moment she found that what was rubbing against her face and hands was no longer soft fur but something hard and rough and even prickly. “Why, it is just like branches of trees!” exclaimed Lucy. And then she saw that there was a light ahead of her; not a few inches away where the back of the wardrobe ought to have been, but a long way off. Something cold and soft was falling on her. A moment later she found that she was standing in the middle of a wood at night-time with snow under her feet and snowflakes falling through the air.

Lucy felt a little frightened, but she felt very inquisitive and excited as well. She looked back over her shoulder and there, between the dark tree-trunks, she could still see the open doorway of the wardrobe and even catch a glimpse of the empty room from which she had set out. (She had, of course, left the door open, for she knew that it is a very silly thing to shut oneself into a wardrobe.) It seemed to be still daylight there. “I can always get back if anything goes wrong,” thought Lucy. She began to walk forward, crunch-crunch over the snow and through the wood toward the other light.

—The Lion, the Witch, and the Wardrobe

What does it tell us about Lucy that she continues alone into the wardrobe even after finding something so unexpected there? Do you have this kind of curiosity? If so, how has it affected your life? If not, what would it mean for your life?

A Sense of Wonder

T
HEY SAY ASLAN
is on the move—perhaps has already landed.”

And now a very curious thing happened. None of the children knew who Aslan was any more than you do; but the moment the Beaver had spoken these words everyone felt quite different. Perhaps it has sometimes happened to you in a dream that someone says something which you don’t understand but in the dream it feels as if it had some enormous meaning—either a terrifying one which turns the whole dream into a nightmare or else a lovely meaning too lovely to put into words, which makes the dream so beautiful that you remember it all your life and are always wishing you could get into that dream again. It was like that now. At the name of Aslan each one of the children felt something jump in its inside. Edmund felt a sensation of mysterious horror. Peter felt suddenly brave and adventurous. Susan felt as if some delicious smell or some delightful strain of music had just floated by her. And Lucy got the feeling you have when you wake up in the morning and realize that it is the beginning of the holidays or the beginning of summer.

—The Lion, the Witch, and the Wardrobe

When was the last time you felt the sense of anticipation and wonder that the four children feel upon hearing Aslan’s name?