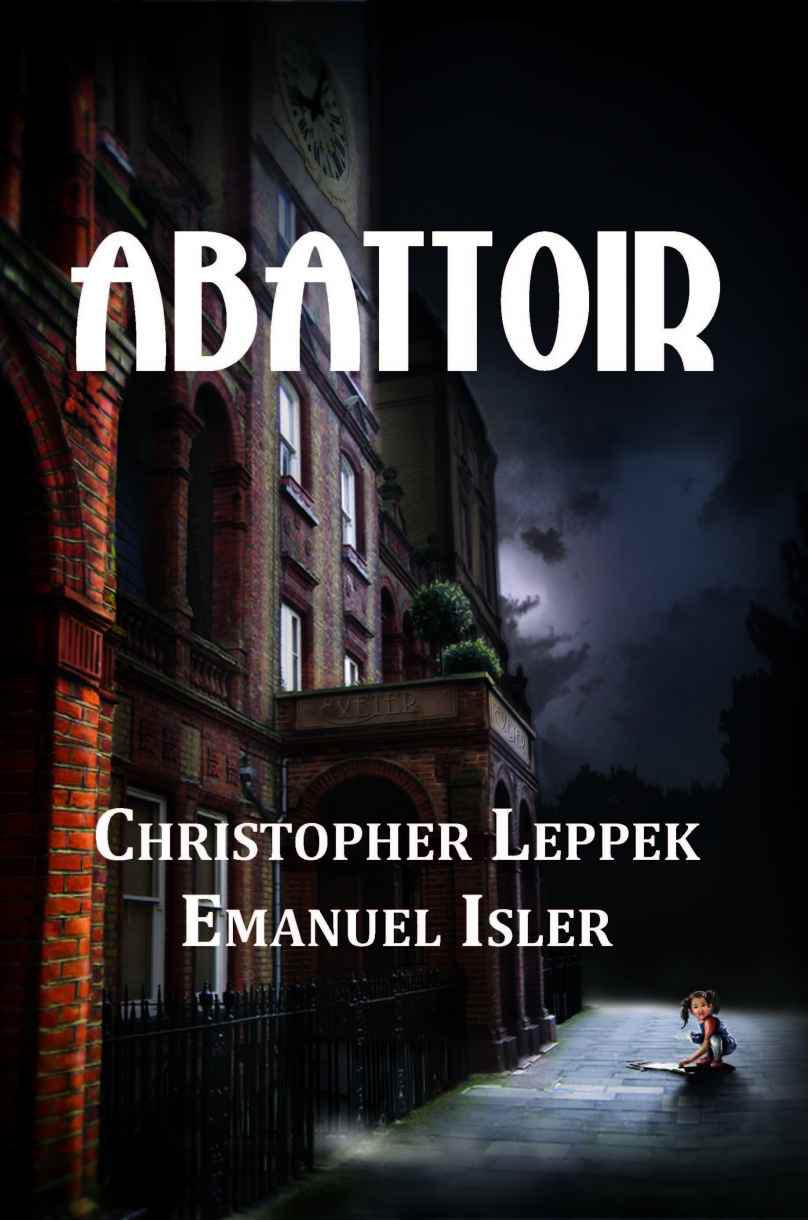 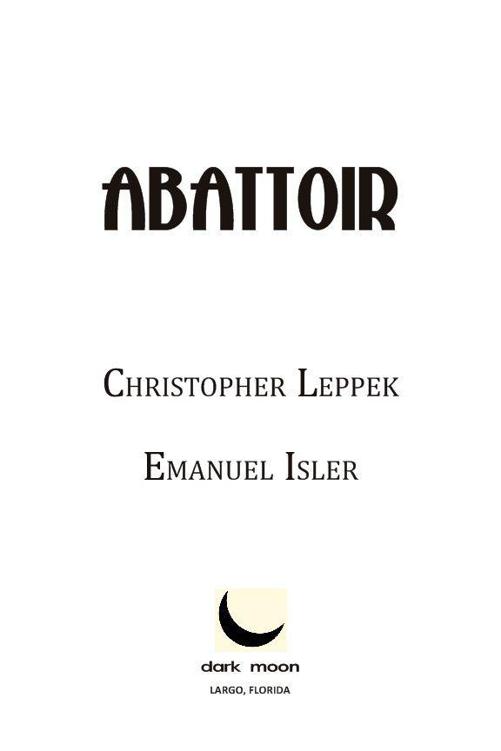 an imprint of Stony Meadow Publishing

First edition published in May, 2012

The stories included in this publication are works of fiction. Names, characters, places, and incidents are products of the authors’ imaginations or are used fictitiously. Any resemblance to actual events or locales or persons living or dead is entirely coincidental.

Without limiting the rights under copyright reserved above, no part of this publication may be reproduced, stored in, or introduced into a retrieval system, or transmitted, in any form, or by any means (electronic, mechanical photocopying, recording, or otherwise), without the prior written permission of both the copyright owner and the above publisher of this book.

For Lori and Lisa

It was the kind of snow skiers call champagne powder—light, crystalline. In other circumstances, in someone else’s life, it might have been beautiful.

To Rollie, it was stinging, blinding agony, lashing his face, forming little clumps of ice in his untended beard. With each step, the cold hammered him, the wind taking his breath away.

He’d fallen asleep on the number 6 bus. On an ordinary night, it would’ve barely been an inconvenience. Tonight, in this God-forsaken wasteland, an old district called Derbytown, it might mean his life.

At first, he thought he’d be able to find shelter after only a modest walk, perhaps in the residential area he’d noticed before falling asleep. Now he was lost.

The area was industrial—warehouses, factories, unidentifiable buildings—unfamiliar. They all looked forlorn, forbidding.

Rollie didn’t pay much heed to weather reports, instead taking each day in stride, trusting his instincts and numerous contacts on the street. He didn’t know that tonight’s weather had been labeled a winter storm alert. Temperatures were expected to drop well below zero. With the wind chill factor, it was a night that could kill.

The snow grew deeper, the wind more cutting. The streets were empty; no pedestrians like himself; no cars, trucks, buses or trains—nothing but the blinding snow.

Rollie dragged the bandana he wore over his head down across his mouth, shifting from pirate to bandit. He gathered the collar of his thin, second hand parka close around his neck, burying his hands in the pockets of his flimsy khaki trousers. He wore only battered tennis shoes, the tips of his toes already well past numb.

Even after the night’s extended binge, Rollie knew that he’d better find shelter, and soon. He wasn’t quite as old as he felt, nor as old as he appeared, but his legs were slowing down, and he was growing more sleepy by the moment. He knew what that meant.

He stopped and looked around. There were a handful of shabby buildings on the street; all with wire mesh on the windows and metal doors. A couple hundred yards away, he glimpsed the outline of another building against the lurid back lighting of the city’s glow. It stood isolated in the midst of an open field, grasping skyward like some soaring weed.

It was tall, four stories at least, topped by a tower crowned with an old-fashioned mansard roof. And
vast;
seeming to span entire acres. In the wind, he heard a faint squeaking; perhaps an open door or window. The sound drew him towards the dark structure.

Drawing closer, he saw that the building was red brick, obviously old and covered with decades of soot. Closer still, he was able to see the faded ghost sign that advertised the building’s former function: Exeter Packing Company.

There was something vaguely familiar about it.

The squeaking was louder now, seeming to come from somewhere to the building’s rear. Feeling his way along the wall like a blind man, Rollie eventually found the source: a window swinging on its rusty hinges. Rollie was no criminal, for all his faults. He didn’t believe in damaging private property, or in stealing. He felt uncomfortable breaking in, but what other choice did he have? Only wandering the streets until he slowly froze to death. Joints protesting, he stooped down to the window’s level, lifting the heavy pane. The frozen metal stung his hand. He slapped his fingers against his thigh to restore feeling.

He peered into the pitch blackness beyond the window. The building was silent, a faint, animal scent seeping from within. Though it probably wasn’t much warmer inside, perhaps he’d be able to scavenge together a fire or something to cover himself. He might not have to die tonight after all.

He squeezed himself through the open window, falling in a heap, the ten foot drop stinging his feet but causing no injury. He stood still, allowing his eyes to adjust to the gloom. After a moment or two, he was able to make out a vast concrete floor, high, naked walls; some sort of basement, largely empty.

He struck one, the darkness partially retreating before its flickering orange glow. There were piles of refuse here and there, the ceiling above a maze of pipes, drains and beams. He tried not to think of their original purpose.

Working blind—only one match left; no use in wasting it—he dragged the tinder into what felt like a large open space. Feeling his way, he crumpled the newspapers and arranged them into a round pile. Atop this, he placed pieces of torn boxes, making sure that air could get beneath them. When the pile was sufficient, he placed the pallets on top, leaving them intact since he didn’t have the strength to tear them apart.

When he struck the final match, a sudden draft of air from somewhere within the sepulchral packing plant nearly blew it out. But somehow the flame took hold. He held it against the newspapers here and there, starting little fires until the matchstick was spent.

It worked; the small flames converging, blazing. In a matter of moments, Rollie felt the first warmth he’d felt since he left the bus.

He basked in the glow, the numbness slowly leeching from his tired bones. The fire represented nothing less than life, and he was grateful for it. Damn, he was
hungry!
But that could wait ‘til morning. For now, the fire was luxury enough.

As the fire grew, he was able to discern more of the room. He peered through the gloom at the odd piles and stacks that were placed haphazardly around. He was accustomed to life on the streets and the rails; had long since learned to improvise with whatever materials made themselves available.

From the look of things, Rollie was the first visitor here in years: The floor had an even layer of fine dust, the air stagnant, faintly laced with that indeterminate animal musk.

He rose from the comfort of the fire, filching a stick from its base. It burned at its tip; as good a torch as he was likely to find in this place. He walked into the coldness of the open room, following the faint glow of his stick. To one side, he saw a long ramp leading upward into darkness. He wouldn’t worry about that for now. Later, perhaps.

He approached the nearest pile; a structure of old cans and bottles; boxes of files and correspondence, all entombed in layers of thick cobweb. He picked up a stained calendar, illustrated with a leggy blonde. The date read 1945. He tossed it back into the pile. Nothing useful here.

He turned his attention to another pile heaped against the far wall. There had to be something . . . he stopped in his tracks.
Jesus.
Rats; at least a hundred, all dead; bodies dried to furry husks, blank holes where eyes once glinted.

What the hell had happened here?
It was as though they’d died scrabbling over one another in suicidal panic; legs outstretched, intertwined, their tiny mouths gaping open.

Rollie turned away, not wanting to think about it, or indulge the ghastly sight any longer. He returned to the fire, in need of its warmth and security, resuming his seat on the hard floor.

He removed his jacket, draping it over himself as a makeshift cover, then positioned himself as comfortably as he could. He was dog tired, but not yet ready for sleep. He grew languid and dreamy, and began to think about things he normally didn’t think about.

Maybe it was some sort of omen—running across this place—maybe it was time to start thinking about the life he was leading. He’d nearly
died
tonight, and for what? His own damn stubbornness? His rebellion against living the life that his father had lived? What was so wrong, after all, about working 9 to 5 in a foundry for four decades?

At least his father had a place to sleep every night; a meal to eat; a paycheck to collect every Friday. What did Rollie have to show for his own years, beyond the shabby clothes and pathetic possessions he carried?

The Search for Artemis (The Chronicles of Landon Wicker) by Griffith, P. D.
The Tome of Bill (Book 7): The Wicked Dead by Gualtieri, Rick
Iron Disciples MC 2 Giving It All To The 1% by Eliza Stout
The Non-Statistical Man by Raymond F. Jones
Accidental Family by Kristin Gabriel
Eternity of Vengeance : Book 7 of the Heku Series by T.M. Nielsen
Sicilian Odyssey by Francine Prose
The Wrong Man by Lane Hayes
Taming the Wilde by Renard, Loki
A Conquest Like No Other by Emma Anderson
Our partner