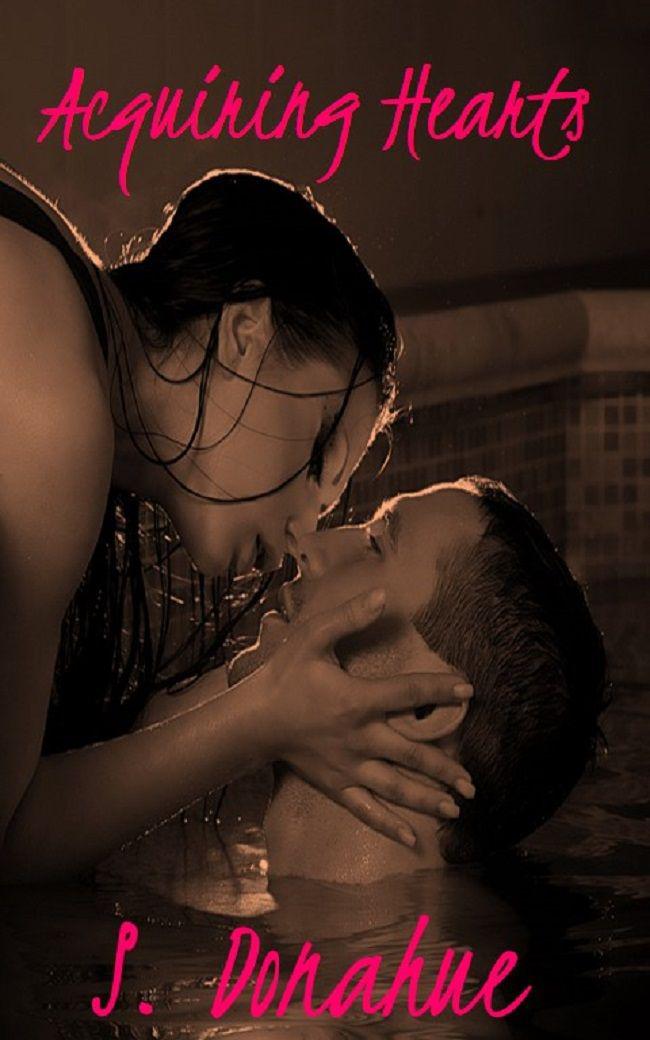 Acquiring Hearts
is
a work of fiction. Names, characters, places, and incidents either are the product of the author’s imagination or are used fictitiously. Any resemblance to actual persons, living or dead, events, or places is strictly and entirely coincidental.

This is a self-published work. All rights belong to the author S. Donahue. If you are a publishing house with interest in the author or this book, please contact S. Donahue at
[email protected]

Please note that no parts of this book may be copied, used, or redistributed in any manner without written consent from the author.

Georgia Font used for Kindle only.

Acquiring Hearts
is dedicated to my husband, Bob and to my son, Bobby. Without your patience, dedication and understanding, none of this would ever be possible. I love you both!

Bradley Roberts focused his eyes on his Blackberry as the elevator lifted him to the forty-fifth floor of Roberts Technology Corporation. As great as it was to be at the top of the high rise, he never understood why the CEO of the company always ended up there. If it was up to him, he’d be on the first floor, walk right in and get down to business.

He inherited the building and business from his father when he was twenty-two years old. He was still in college when his father had passed away from a massive heart attack. His father, Bradley Roberts Jr., aka “Junior”, as everyone had called him, was not a sick man. He never had health issues; therefore his death was rather sudden and shocking to all who loved him.

Bradley would never forget the day that his mother called and told him to get to the hospital. “Bradley you need to get down to the hospital right away. There’s no time for questions.”

At the time of the call, Bradley was playing basketball with a couple of his college friends. He let them know he had an emergency; ran to his car and took off.

He raced through the double doors of the ER looking around for his mother. “Is Joanna Roberts here?” Bradley said with a sense of urgency in his voice. “I need to see her right away. I’m her son, Bradley.” The security guard ushered him to the emergency department without asking any questions. When Bradley saw his mother’s face, he knew his world was going to change forever.

“What’s going on Mom?” Bradley asked with emotion thick in his voice.

His mother hesitated because she knew this was going to be hard on him. Somberly, she replied, “Your dad is gone. He passed away from a massive heart attack. I found him on the floor when I came in from the store.”

Bradley thought he was going to throw up right there on the emergency room floor.

“I called 911 right away, but it was too late. They couldn’t revive him,” his mother explained with a pained expression written on her face. She could tell the shock was too much for him to handle. As Joanna looked at her only son, she wished she could take his pain away. She reached over to hug him and console his broken heart, but he pulled away. Bradley felt so cold inside right now.

This isn’t happening to me, it’s all a fucking dream!

The words that his mother spoke next could only throw a wrench in the life of a twenty-two year old. “You’re now the man of the house, and you’ll need to take over the family business. You need to grow up and take responsibility. I know you’re hurt, but your father would want you to step up.”

Bradley needed time to process all that had transpired. His father was gone, and Bradley was now the CEO of Roberts Communication. He needed to think. He had to get out of there.

“Mom, I don’t need this right now. My father is gone and I can’t think about this at the moment. I need to be alone.” He barked the words at her then stormed out of the emergency room. He jumped in his car and just drove. His body was numb from the shock. How in the hell was he supposed to run a major fortune 500 company?

Roberts Technology Corporation was a billion dollar a year company that his father had built up from obscurity to household name in the past twenty five years. Junior had taken it over from Bradley’s grandfather in 1988 and the company had grown exponentially due to the technology boost over the past decade. With all the competition out there, they had stepped up

their game and were now ranked high up there with the technology elite in the upper echelon of the industry.

The family company created everything from televisions, computers, laptops, and cell phones. Bradley’s most recent project, the creation of “The Notelet”, would most definitely put the company at #1 in the industry. If everything went according to plan, it would surpass the success of the iPAD and the Galaxy Tablet.

The memory of Bradley’s father crept into the young CEO’s mind at the strangest moments. His father had been gone for seven years now, but somehow he’d pop into
his thoughts out of nowhere. Bradley really wasn’t in the mood to have one of his depressed days. He knew his father would be proud of what he has accomplished with the company, but it just wasn’t the same as having him there by his side.

Six months ago, Bradley hired a new secretary named, Rachel Rossini. She seemed to be working out great. She was very competent and got the job done, no questions asked. The office was running smoothly and he had no complaints where she was concerned, unlike his last secretary, who was a complete and utter disaster. Rachel was a family oriented person. When she wasn’t working she was with her husband and twin boys, Jason and Jeffrey, who were twelve years old. She was focused on performing her job diligently, not herself, unlike most of the other secretaries the job agency had sent in the past. This made him feel confident in her work ethic.

He walked off the elevator, towards the front desk before he reached his office. “Good Morning Rachel, do I have any messages this morning?” He noticed Rachel was looking at him oddly.

“
I don’t have anything work related, if that’s what you’re asking,” she replied cryptically. “You just received a message from your psychotic ex-girlfriend, Sheila. She said to call as soon as you walked through the door.”

He quickly responded, “Not happening, and hold all my calls unless it’s an emergency. Thanks.”

“Well if it’s any consolation to you, I told her to stop calling as this is a place of business and we don’t have time for her obnoxious games.” Rachel called out to him as he was staggering into his office.

He shut the door abruptly. Bradley was so thankful that his secretary was so blunt, because Sheila, the crazy bitch, just didn’t get that he didn’t want anything to do with her. He threw his briefcase down on the couch, walked over to his desk and plopped down in the chair. He removed his tie aggressively and threw it on the couch, as if he was shooting a 3 pointer.

Where are the damn Advil Gel-tabs? My frigging head is splitting.

As he reached in his drawer for the pills, he thought back to his past relationship with Sheila. It wasn’t Sheila’s looks that turned him off. It was her nasty attitude and materialistic ways. He’d be the first person to give anything to anyone, but after two years of being together, he finally realized that she was using him for his social status and money. The thing that perplexed him was the fact that she had her own money and her parents were surgeons. After he noticed that she was becomi
ng angry and possessive all of the time, he decided to meet up with her and end their relationship for good. She couldn’t take no for an answer. He could’ve been an asshole about it and terminated the relationship on the phone but he did the gentlemanly thing and met her in person.

“I can’t believe you’re doing this to me! I love you so much!” she wailed in the restaurant, causing an embarrassing scene.

“I don’t feel the same way about you. I don’t want to hurt you. We can still be friends.” He said it as nice as anyone could have put it.

She stepped up to him and slapped him across the face. She threw her hands in the air, “This isn’t the last you’ll hear from me!” she threatened, as she stormed out the restaurant.

He could only say what any man would to not look like a complete and utter fool in front of a whole restaurant full of people, “Great! Lucky me.”

The waiter must’ve felt awkward, because he asked Bradley if he still wanted his food. Bradley told him to bring the check and wrap the food to go.

Sheila made good on her promise because she called on a constant basis and he ignored all of her calls.

Today is beginning just wonderfully with all this reminiscing. Hopefully, it will only get better.

Around noon, Bradley decided to go for a walk and clear his head. He was going to stop at the Barnes and Nobles book store while he was out. He liked reading up on the competition while he sat and drank a cup of coffee. This always relaxed him when he was having one of these days. He told Rachel he’d be out for a while and to call his Blackberry if she needed him. She said she’d call if any emergencies came up and that she was going to lunch with her sister at one o’clock, if that was ok. “Go ahead, have a great time. I’ll be back in the office soon”.

He chose to read the Philadelphia Inquirer but instead of actually reading, he was staring off into space. At that moment, Bradley realized he was going to be thirty years old in a couple of months. He felt like an old man sitting around reading the paper. He wondered where the time had gone. He felt like he has missed out on so much since he took over the corporation. He still kept in touch with his college friends, and went out every once in a blue moon, but his social life fell apart seven years ago. He didn’t have the time for a steady girlfriend and women these days seemed to only want to use men for sex and money. He had gone on his fair share of dates, had one-night stands, but it just didn’t sit well with him.

Bradley felt like he wanted more. He thought it would be nice to have a family. He had an established career, could provide for a wife and children but he never really met anyone that he felt worthy of spending his life with, plus he had a lot at risk. He definitely wasn’t lacking in the looks department. He probably could have any woman he wanted. He had a full head of black hair, which he was grateful for, piercing green eyes and lips that any woman would want to devour. He tried to eat right and work out in his private gym, when he wasn’t working CEO hours. This powerful
guy needed to maintain an image, but why was he so miserable?