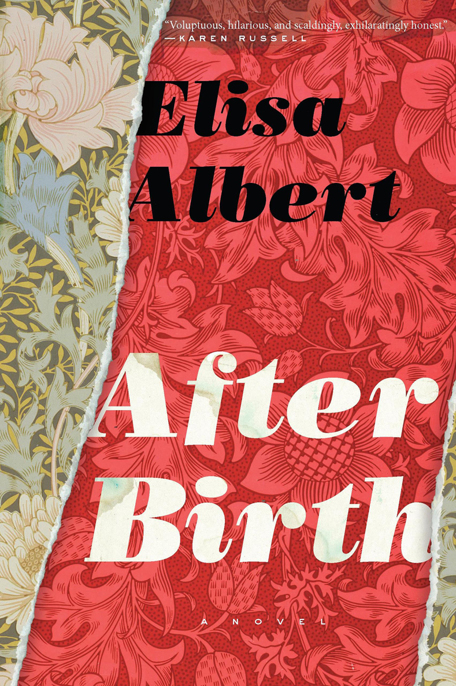 Parts of this book have appeared in a different form in
Tin House
.

I have found out another funny thing, but I shan’t tell it this time! It does not do to trust people too much.

Why is it that when a woman tells a terrible story, no one, not even her own mother, believes her?

The buildings are amazing in this shitbox town.

Here’s my favorite: four-story brick, three windows wide, with a Historical Society Landmark plaque. Built in 1868. Elaborate molding painted many shades of green. My friends Crispin and Jerry spent the better part of ten years rehabbing it. They’re on sabbatical this year in Rome, those bastards. They sublet to this amazing poet with a visiting gig at the college. Mina Morris. I’m a little obsessed with her, by which I mean a lot, which I guess is what obsessed means.

The parlor curtains are open and the lights are off.

I drove Crisp and Jer to the airport, and Crisp handed me an estate-sale mother-of-pearl cigarette case perfectly filled with nine meticulously rolled joints.

Listen
. He lifted my chin and met my eyes in this avuncular way he has.
You’ve come a long way. You’re going to be fine
. He said it slowly, like I might be very old, very stupid, or both.

I have five joints left.

The baby’s first birthday approaches. Still, there are bad days. Today’s not so bad. Today I have fulfilled two imperatives: one, the baby is napping; two, we are out of doors, a few blocks from home.

Anyway, Mina Morris. Crisp gave me her contact info because we’re supposed to be landlord proxy, Paul and I, take care of anything that comes up with the house while they’re gone.

Mina Morris. Quasi known as the bass player from the Misogynists. Girl band, Oregon, late eighties. Lots of better-known girl bands talk about having been influenced by them.

Cold this week, and dark so early. Late afternoon and the light is dead. So it begins: months of early darkness and cold. November again, back around to another. Last November a nightmare blur of newborn stitches tears antibiotics awake constipation tears wound tears awake awake awake limping tears screaming tears screaming shit piss puke tears. My weeks structured around a very occasional trip to the drive-through donut place near the mall, baby dozing in the back. Idling in the crappy old Jewish cemetery across the highway, heat cranked, reading names on crooked headstones, sipping an enormous, too-sweet latte, tapping at the disappointing glow of my device.

Faint whistle. There goes a train. To the city, probably. Four fifteen. Too late for the baby’s nap now, too close to bedtime. But I’ve given up trying to control this shit. If you have an agenda, any needs or desires of your own (like, for example, to take a shower, take a dump, be somewhere at a given time, sit and think), you’re screwed. The trick is to surrender completely, take your moments when you get them, don’t dare want for more.

Mina Morris: poet, erstwhile rock star. Here, in Crisp and Jerry’s house. Gives me an obscure little thrill, it does. I want to be friends.

A third-floor light goes on, and simultaneously the baby starts up with the whimpers. I take my cue. Keep the stroller moving, always moving, my reflexive animal sway. Respite over. Maneuver down the block toward the river, up Chestnut, and on home. Put some cheese on crackers and call it dinner.

Another day gone, okay, and I get it, I got it: I’m over. I no longer exist. This is why there’s that ancient stipulation about the childless being ineligible for the study of religious mysticism. This is why there’s all that talk about kid having as express train to enlightenment. You can meditate, you can medicate, you can take peyote in the desert at sunrise, you can self-immolate, or you can have a baby, and disappear.

Which might make sense if I was all consumed with thoughts of baby-food making and craft projects and sleep-training philosophies and bouncy-chair brands, but I really can’t get all that excited about any of that shit either. So basically I have no idea what to do with myself, Paul.

Babe. Give it some time.

Utrecht, New York: the valiant but disgusting Bottomless Cup, the filthy antique shop with unpredictable hours, the burrito bar with blurry pane glass. Windowless Ozzy’s, the diviest bar ever, embodiment of dive, hilarious exaggeration of dive: jaundiced, wispy-haired men in stonewashed denim smoking endless cigarettes and playing pool on a disintegrating table at eleven in the morning. The tiny cheesecake-burlesque joint run by kids (it’s funny how you start calling them kids) who graduated a few years ago and are committed to local regeneration. They smoke weed and bake all day, act sort of put out when you come in wanting a slice of caramel toffee and some tea. Long-empty storefront, recently empty storefront, long-empty storefront.

Two hundred miles directly up the river on the east side, forty-five minutes past the sweet antiques, the second homes. A town, I guess you’d call it, a once-upon-a-time town, some blocks of cheap, amazing, mostly run-down houses crying out for restoration by the likes of us. We are happy to oblige them, the houses. We live like kings. When Paul got this job I was six months pregnant and we thought: okay, yeah, go fuck yourself, Brooklyn! We spent like a hundred dollars on an amazing 1872 four-bedroom Italianate with a killer porch and congratulated ourselves on the excellent aesthetic of it all, no “good” school district for miles, low volume of hyper-ambitious creative aspirants, stoic wide planks groaning wisely underfoot.

Our accountant works out of the creaky Albany townhouse where Herman Melville spent part of his childhood. There’s an okay coffee roaster, a tiny wine bar, a tinier used-book store, and a shitbox convenience store. And the food co-op two towns over where I work Fridays like a good little citizen. Sometimes I even wear the baby around in a sling.

The college in town is pretty much its own thing—rich kids who didn’t get into fill-in-the-blank—and the town, or quasi town, has been in varying stages of rot for a while. Some faculty live in this handful of blocks, in these amazing, intermittently neglected houses sloping down toward the overgrown banks of the river; others live in head-shakingly unattractive suburbs spreading out like rays from the sun of the mall. A stubborn few actually commute from the city, refuse to be separated from that fucking city, not even for wildly affordable pocket doors and stained glass and exquisite molding and antique tile and anti-glamorous/glamorous social annihilation.

In the early nineteenth century, Utrecht was the center of shirt-cuff manufacturing. Big bustling factory supported the entire town until a succession of patents changed shirt-cuff manufacturing forever, mass production, outsourcing, what have you, and Utrecht withered like a corpse. A dump, to be sure, but still, a kind of particularly sweet Hudson Valley dump. A shirt-cuff bigwig founded the college in 1845, purportedly because his son didn’t get into Harvard.

Remnants of the shirt-cuff era abound. A leathery, delightful old girl band called the Cuffs. The empty shell of the mill downriver. Once in a while there’s a spirited movement to turn it into some sort of performance space, a DIY community center they want to call “the Downriver,” but local bureaucrats crush that regenerative shit time and again, dashing the hopes of our sweet, stoned cheesecake artistes.

Few blocks in any direction are desperate slums, and on Sundays you can’t so much as buy a newspaper within a mile. But there’s a tiny, unpretentious farmers’ market in the courtyard of a vacant mini-mall on the edge of town, and a chain pharmacy just opened a ways down Main Street, in a long-empty storefront that was for a hundred years a jewelry store.
BARLOW AND SONS, EST. 1893
: you can still see remnants of the old gold lettering. The chain pharmacy didn’t even bother to fully renovate. Just slapped a fluorescent sign over the door and drywalled the interior.

First official Mina Morris sighting. My heart did an Olympic dive. Bulk section at the co-op. Unwashed hair in loose knot, filling a bag with organic honey caramels. I watched her unwrap one and pop it into her mouth. Total insouciance. Gorgeous creature. And! She is way pregnant. Hard-not-to-stare pregnant.

I wrote to her months ago,
hey
and
if you need anything
and
welcome to our shithole
and
please don’t hesitate
, blah blah, and an elaborately casual offer of
tea or something anytime
. Spent like half an hour trying to make it sound casual, cut down from the volumes in my head. Embarrassing. I have zero friends here.

She responded immediately, in full:
cool thanks.

Meanwhile I devoured her book. Weird beautiful bewildered little prose poems about the summer of 1990, mostly, just after the Misogynists broke up. Roaming Europe, shooting up, regularly letting a disgusting man named Ivan pay to fuck her up the ass, pining for some nameless bastard with a wife in Paris. Then her family brings her home and puts her away. Electroshock. And the best part is how she just kind of leaves you there, wondering if she’ll make it out all right. Which, I mean, to whatever degree, it appears she has, but
Jesus
. Makes my own fucked-up shit seem downright housewifely.

I held the book close when I finished, actually embraced the thing. Had the inclination to rip out and ingest a page, for the same reason you might get a tattoo, so it’ll stay a part of you, edify you forever.

Paul has no idea who the Misogynists are. That’s Paul in a nutshell. He can tell you what foods gave Whitman gas, though.

They sound familiar, I think
, he said in the spring, when the department announced Mina was coming. It was a nice night, almost warm, the worst of winter receding.

Paul’s colleague Cat was over. She sat bolt upright, set her wineglass on the floor.

Nuh-uh, don’t even. You don’t know the Misogynists? “Eat Me While I Decide”? “Can’t Stop Wanting”? “Who the Fuck Are You”?

Paul shrugged. Cat is always really appalled when other people don’t share her precise cultural context. Crispin once described it that way. He meant it as an insult, I’m pretty sure, but it’s one of the things I actually like about Cat: the way she wants us all on the same page, the way she seems sort of angry, betrayed, when it appears that we are not all on the same page.

Wait
, she said, tapping at her device.
Wait, wait. Here
.

Promptly we hooked up the speakers and were joyously assaulted by a Misogynists number.
Na na na hey hey hey suck my clit and we’ll call it a day
.

The Wolf and the Bobcat: by E A Price
Now Wait for Last Year by Philip Dick
Galaxy's Edge Magazine: Issue 4: September 2013 by Mike Resnick [Editor]
The Caprices by Sabina Murray
Jazz by Toni Morrison
Right to Life by Jack Ketcham
The Best Women's Travel Writing by Lavinia Spalding
The Tear Collector by Patrick Jones
Throttled by Chelle Bliss
A Deceptive Clarity by Aaron Elkins
Our partner