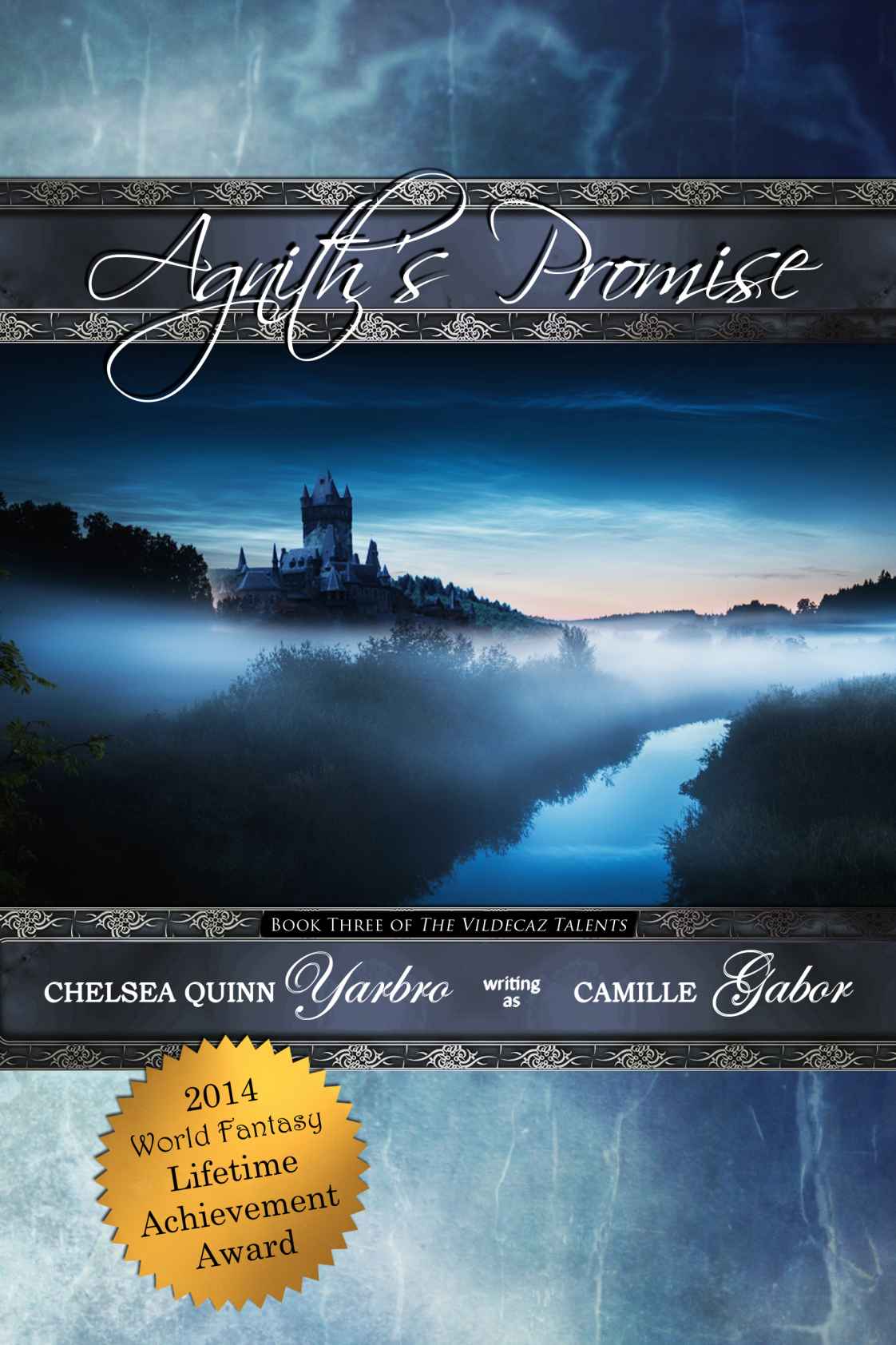 Book Three of the Vildecaz Talents

While at the Imperial Court, Erianthee witnesses an enormous Conjure Storm that turns half of the palace complex to rubble.
Afraid of what could come next, she heads for Vildecaz and home with Kloveon escorting her.

Meanwhile, in her searches for possible clues to Duz Nimuar's location and condition, Ninianee has come upon something that sends her and her partner, Doms Guyon, back toward Vildecaz,  But both sisters find their travels marked by hindrances and unexpected difficulties.  When they finally arrive, they discover that malefic forces have been at work here, too, and they have little choice but to take them on, or lose their Duzky, their father, and their talents completely.

Book One of The Vildecaz Talents

Stirring high fantasy adventure as two sisters must find their power in accepting their journey.

Ninianee and Erianthee, the daughters of Duez Nimuar of Vildecaz, have unusual magical talents: Ninianee has a close relationship with animals, Erianthee can summon up the Spirits of the Air to take on human form and act out legends and myths.

When Erianthee is summoned to the Imperial Court, Ninianee remains behind at Vildecaz, not only to administer the Duzky, but to begin a search for Duez Nimuar who has disappeared.

Book Two of the Vildecaz Talents

Duez Nimuar is missing and his two talented daughters are determined to find him, Erianthee through her magical Puppet Shows. Niniannanee through her close knowledge of animals.

Both sisters are accompanied by their declared suitors. Kloveon with Erinathee and Doms Guyon with Niniannanee; what each discovers in her own way makes it clear that there is more to their father's disappearance than anyone expected.

This ebook is for your personal device only. No part may be reproduced or transmitted in any form or by any means, graphic, electronic, or mechanical, including photocopying, recording, taping, or by any information storage or retrieval system, without written permission from the author.

This book is a work of fiction. Names, characters, places and incidents are products of the author’s imagination or are used fictitiously. Any resemblance to actual events or locales or persons, living or dead, is entirely coincident

with thanks and
good wishes

“You see why I need you to help me,” Riast said to Erianthee as they picked their way through the wreckage of his Imperial Hall. In the two days since the conjure-storm had struck, all of Tiumboj Castle had been inspected, and where possible, repair-spells had been cast to minimize the damage, holding up walls and restoring what structure they could until the masons and carpenters could get to them, giving the Castle something of the look of a patchwork building – which it was. In this vast hall, a portion of the ceiling was missing, and a light, misty fog lent its blur and dampness to the late morning. “If my enemies are willing to bring this destruction upon me, I have to know who they are, and what they have in store for me. Otherwise I’ll be as naked to their next attack as I was to this one.” His face bore the stoic sadness of someone expecting the worst.

“Tell me, Emperor, why you think my Shadowshow can do this for you?
How will the Spirits of the Outer Air be able to embody you foes for you, when neither you nor I know who they are?” Erianthee asked, feeling sympathy for him even as she steeled herself to refuse his request. She felt shabby and gritty, the Castle baths having been one of the first buildings hit by the storm. She still wore the torn and blood-stained gaunel she had put on before the conjure-storm struck, for her apartments had crumbled during the onslaught – fortunately Rygnee had been in the Servants’ Hall, near the central kitchens when lightning bolts demolished the suite of rooms, and although bruised, was still alive, but like Erianthee, had no other garments than what she stood up in.

“Because it must,” said Riast, his eyes dark with commitment.
“Surely you see that, don’t you?”

“You have fine magicians at Court, many of them with more talents than I possess, many who share your goals,” she pointed out as she had done often before.
It was an effort to keep her manner acquiescent – she wished he wouldn’t continue to ask this of her. “They must be able to provide you the information you want more reliably than I can.”

“Your Shadowshows are less tainted than their prognostications
– you are free from interests in the outcome of this attack, which inclines me to trust you more than I can afford to trust my magicians. If you were of the Court and the Empire, I would have doubts of you, too,” he responded, making a sign to the Imperial Guards who followed after him. “This is between the Duzeon and me. Make sure it is so. You’re not to allow an interruption.”

The Guards all respected him and took up their protective stances out of hearing range, their pikes upraised.

Leading Erianthee away from the Imperial Guards, Riast tried once more to explain his plan. “If you will do a Shadowshow as we had planned, you can reveal how the conjure-storm came about. This should be less arduous than performing a prophetic Shadowshow – the events have happened and you needn’t release the Spirits of the Outer Air to proceed on their own. Think of this as one of the myths you bring to life so well. You can do it as you have done so many other Shadowshows, and you can earn my eternal gratitude, and the gratitude of my House. For Vildecaz's sake, as well as the sake of the Porzalk Empire, tell me you will do this.”

Recalling what Kloveon had told her about his own concerns, Erianthee said, “You say this as if you’re prepared for bad news.
But if the Shadowshow reveals . . . If it is not what you hope to learn, what then? What use will it be, assuming that there is enough in what is revealed to help you. When I have performed such Shadowshows in the past, I had no control over them – either in what they showed, or what they addressed.”

“Anything will help me.
I know I will have to face the knowledge of betrayal, no matter what the outcome,” said Riast somberly. “It is not a thing I am looking forward to doing. But better to know, and to root out the treason, than to guess at its proponents and through ill-considered action, harm those who support the Empire and destroy allies instead of enemies.”

The answer was too pat for Erianthee’s comfort, a rehearsed assurance that meant he had anticipated her reservations.
“You place me in a very difficult position, as you must know. You may hold this against me, Emperor, but I am unsure I can do as you ask. You know my reservations from our previous discussions, and since the storm . . . I have been affected by the conjure-storm as much as anyone, and that may cloud my vision.”

“But you have just said that you have no control over your prophetic Shadowshows.”
The Emperor was clearly becoming annoyed.

“Exactly so.
You are the one who would like me to shape such a Shadowshow, Emperor. But I can’t promise that I’ll be able to separate myself from the events and their source, even if I were capable of performing as you ask.”

“I’ve considered that, and I have consulted a few of my Councillors,” said Riast. “I know that all magicians and those with similar talents are subject to all manner of influences most of us with only minor abilities cannot fully comprehend.
Yet I know you would want all this ruination to be retaliated. You can’t expect the Porzalk Empire to numbly accept this attack, can you?”

“No,” she said forlornly.
“But I see no use in escalation, and I fear that no matter what my Shadowshow reveals – if it reveals anything – will be nothing more than an incentive to more devastation and anguish.”

“Your concerns do you credit,” Riast told her, patting her upper arm in an avuncular fashion.
“I wish I were in the position to adopt it for myself, but alas, I mustn’t allow myself to be lulled by conscience. This affront is too great. The traitors must be found.”

“Surely they must, but I doubt my Shadowshow would be the most effective way to do that.
Your Court magicians will do you a better job of discovery than ever my Shadowshows could do,” she said, and went on before he could present another reason to have her attempt what he sought. “I have no sense of the complexities of your situation, Emperor, beyond that they are complex. If the Spirits of the Outer Air cannot grasp these subtleties through me, then whatever results I may accomplish for you, they’ll be inaccurate. I wouldn’t like to point a finger at one who is undeserving of condemnation, and leave the real culprits undetected.”

“I’ve thought about that,” said Riast.
“And I would like to include Magsto Horeion Kovat in your presentation. He has a very good talent for detecting accuracy in all things, and could help to evaluate what your Shadowshow – “

”I can’t do a Shadowshow under such conditions, not even one about myths
– look at this place. It’s held together by cords and spells. To try to manifest Spirits of the Outer Air in such a setting – it would take someone far more accomplished than I to do so,” she exclaimed, daring to interrupt him. “If there is any secondary evaluation while I’m doing the Shadowshow, the Spirits of the Outer Air will not manifest at all.” She twisted her hands together. “I thought I’d explained this all to you, Emperor. I don’t say it to defy you, but to make certain you aren’t disappointed, or worse, misled. I haven’t the strength to exceed my talents, and I would not trust my results if I did.”

“Yes, you did tell me something of the sort before, and I was prepared to do my
best to extend a certain leeway to you,” Riast said. “But the situation now is much more grave than it was three days ago. Then I might have tried to accommodate your requirements, but I no longer have such an option. I don’t mean to exhaust you, Erianthee, or damage you, but I must know who is moving against me, or we may see a repeat of the bloodshed that followed my great-uncle’s death which preceded my coming to the throne. You’re too young to remember. You weren’t born when it happened, nor was your sister. But doubtless your father – when he returns – can tell you a great deal about those appalling four years.”

The Boozy Baker: 75 Recipes for Spirited Sweets by Lucy Baker
We Are All Completely Beside Ourselves by Karen Joy Fowler
Too Darn Hot by Pamela Burford
The Rogue's Princess by Eve Edwards
A Funeral for the Eyes of Fire by Michael Bishop
Mistaken by Fate by Katee Robert
A Rope--In Case by Lillian Beckwith
The Salmon of Doubt: Hitchhiking the Galaxy One Last Time by Douglas Adams
Maggie Get Your Gun by Kate Danley
The Dom Protects His Puma [Unchained Love 2] (Siren Publishing Ménage Everlasting) by Cara Adams
Our partner