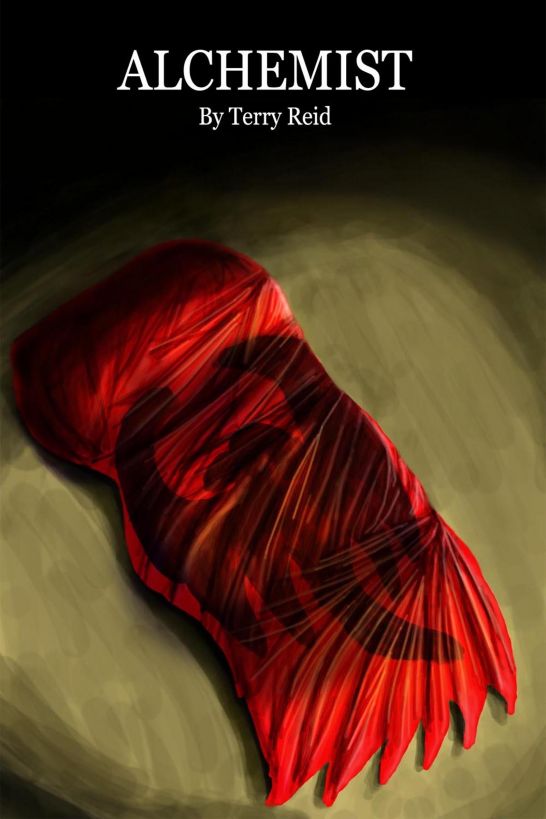 Published by
Terry Reid at Smashwords

Terry glanced at
the piece of paper in her hand. She then peered up at the number
above the doorway. It was definitely the correct address. It was a
cold and foggy night so she hurried up the steps, not wishing to
tarry.

Raising her hand
to the door she knocked and then stood back and waited. After a few
moments she tried again. Nothing. She tried again, this time
banging harder and louder. She stood and listened. Hearing no sign
of movement from within she concluded that no one was home.

Hurrying back down
the flight of steps she got back into the car and drove home. It
would have to wait for another night.

Terry flicked
through the stations, finally settling on one of the many twenty
four hour news channels. A rumble of wind outside caught her
attention for a moment as rain lashed down the window. Then her
attention returned to the TV.

There was
some sort of political debate going on.
Nothing interesting happens anymore,
she thought.
Eleven years ago there used to always be things on the news.
Strange things granted, but it had been a more exciting time. And
no-one had ever worked out the connection between them
all.

But she had
been there and had been part of all of them. When she was fifteen,
Terry Jones and her friends saved the world. But no one knew that
and it was a story she had never told anyone.
No-one would believe me or they would think I was
mad
, she mused.

Terry considered
at the time how frightening everything had been, the danger, the
uncertainty of whether they would succeed or not. Now, looking
back, she realised she missed it in a strange way.

After it had
all past, Terry had got on with her life, so had everyone else,
except Faye. The water elemental had vanished into the sea one day;
to reconnect with the natural world...
that’s what she had said anyway
. She was never
seen again.

In truth Terry did
not know if Faye was still alive or not. Water elementals could
merge their bodies into water completely, control them, and they
could manipulate the rain and tides. But not forever, they had to
come back sometime.

But Faye had said
that she wanted to reconnect to the world by melting her body into
the sea forever...Terry still did not fully grasp the concept, even
after nearly seven years.

There was
only so much liquid that water elementals could control when in
that form. Controlling all the waters of the world in every corner
of the sea...the idea seemed impossible.
She’s probably dead
, Terry concluded, not for the
first time.

Another loud gust
of wind against the window bought her out of her reverie. She
shifted in her chair to a more comfortable position only to realise
her arm felt strange. Looking down she realised that it had
transformed into its living metal state. But what surprised her was
that a sharp six inch blade protruded from her wrist.

Terry lifted her
arm and examined it in the light of the TV. Through will alone, the
blade grew in length. Something stirred deep within her, a lust to
fight. The ancient, instinctive thoughts inside the deepest
recesses of her mind...

She suddenly
realised that she felt famished. The blade shot back into her arm
as the skin returned to the colour of flesh. Getting out of the
chair, she went to the kitchen to find something to eat.

Conner lifted the
file that had been delivered to his desk that morning. Weighing it
in his hands for a moment he flicked to the end to see how many
pages there was. He sighed when he discovered that it was nearly
eighty. Turning back to the first page he made himself comfortable
and began to read the tedious quarterly accounting figures.

“Sir.” Said a
voice. He looked up. Standing at the door to his office was Tyler,
one of the younger admin staff.

“Come in.” He
said, waving him in. He welcomed the distraction.

“Sorry to
interrupt sit but I was wondering if you had had a chance to think
about what I suggested last week.”

“Oh yes, sit
down.” He said, indicating for him to take a seat.

The younger man
did as he was bid.

“I think it’s a
good idea, especially with the success we’ve been having in
China.”

“Are we really
doing that well?” The young admin asked, poorly feigning
surprise.

Connor liked Tyler
but he only wanted to get ahead. He wasn’t interested in anything
else that he knew.

“Absolutely,
business is soaring in the Middle East.” Conner replied, playing
along. He shifted in his chair, still uncomfortable. “But I think
if we were going to expand our web portfolio, we should try to make
use of the sites the companies in China already have.”

Tyler seemed a
little disappointed, but kept his decorum. “May I ask why you think
that sir?”

“Well Tyler, I
just think it would be much simpler and cheaper to put a link on
all their websites connecting to our home one rather than building
a set of new ones. We have thirty four businesses over there now,
don’t we?”

“Thirty seven.”
Tyler was quick to correct him.

“Thirty seven.
Anyway, my point is we only currently have six web designers, all
already tied up to other projects. Asking them to build thirty
seven new websites would be a daunting task. We could either wait
months until they finish their current projects or hire more
people. But we’re expanding so quickly now we can’t afford to wait
months to link all the sites together can we?”

“Mr Gregory wants
our name more prominent over there, so we need to get this done
now. But on the other hand he is not keen to hire more people, so
I’m afraid the only option we have is putting out logo on their
sites and linking them.”

“I understand that
sir but some of these businesses do not have websites. What about
them?”

“I know. I think
that makes it slightly easier for us. The ones that do not have
sites we can just give a watered down version of our own too. I
know some of them don’t have very good computers, but I’ve worked
it out and it would be cheaper to get them new equipment, get them
up to speed and if they need anything we could update the websites
from here.”

Tyler nodded
again. “I see.” But Connor could see the disappointment in his
eyes.

“I’m sorry that I
can’t approve the creation of a new series of websites just now
Tyler. While business is good over there the market’s still a quite
rocky over here.”

“No, I understand
completely.”

“But like I said,
I think it is a good idea to roll out new sites across the entire
company and maybe it is something we’ll look at again in twelve
months or so.”

Tyler forced a
smile as he stood to leave. “Well, thank you anyway sir.”

“And you too sir.”
Replied Tyler as he left.

Conner glanced up
at the clock on the wall, realising that it was not even quite half
nine yet. Sighing, he returned to the report which still awaited
his pleasure.

That night the
rains returned and with it the fog that had lingered the two
evenings beforehand.

Connor and his
wife Jo sat with Terry in a quiet pub not far from Edinburgh’s city
centre. Connor and Terry had not seen each other for over two weeks
so Conner had took it upon him to phone and see if she wanted to
meet up.

“Do you want me to
pay?” offered Conner, opening his wallet as Jo stood to go to the
bar.

Conner gave Terry
a defeated look and put his wallet away. “Tomorrow she’ll say that
I never bought enough of the drinks.” He muttered.

Terry grinned.
“Even if you did she would not let you win.”

Conner
laughed. “So while we have two minutes before she returns and we
have to talk about boring everyday stuff again let’s talk
about
real
things.”

Terry indulged
herself. “Yeah, I keep getting this weird metallic tinge in my
mouth.”

“How long have you
been getting it?”

Terry gained a
thoughtful look. “About six days. I don’t know what it is.”

Conner did not
seem concerned. “Well you are made of metal for the most part. Have
you ever considered that you always have that taste in your mouth
and that this is the first time you’ve actually noticed it?”

Terry scoffed.
“No. Do you constantly have a taste of glycerine in yours?”

Conner downed the
last drops of his beer. “No.”

Conner frowned.
“Didn’t you used to get that when you were younger?”

“Yeah, sometimes.
But I’ve not had it in years. And unless I’m going through puberty
again I don’t know what’s causing it.”

“Christ, I
remember how bad that was.” Conner said, it all coming back to
him.

Conner grinned.
“You didn’t burn down two flats when you lost your temper.”

“You didn’t skewer
everything that moved within fifteen feet of you.”

“I will give you
that one.” He said, pointing a finger at her. He glanced across the
pub to Jo, to check on her progress. She was beginning to make her
way back. “Out of interest,” he said hurriedly, “are you still
growing?”

“Fine.” He looked
back at Jo, then quickly said, “Don’t forget, you used to get that
taste sometimes when someone was using a portal between the
worlds.”

Further
conversation was cut short when Jo returned to the table. She
looked less than impressed as she sat the drinks down.

“I don’t
know why you wanted to come here, the drinks are
so
expensive.”

“How much were
they?” asked Conner, taking his beer.

“Nearly ten pound,
just for those three drinks.” She replied angrily, indicating them
with a curt nod as she put her purse away into her bag.

“That is quite
dear.” Terry agreed. “Do you want some money?”

“No, no, it’s
alright.” Jo refused, as her husband slid the glass of wine toward
her. “But I don’t think we should buy another round.”

“We could always
go somewhere else after this.” Suggested Conner. He took a long
draw of his beer.

“If you want to,
I’m not really bothered. I think we should maybe go home in half an
hour or so, I’ve working again in the morning.” She said, fumbling
through her bag.

SKIN (Demon Chaser 4) by Charlene Hartnady
The Girl in Berlin by Elizabeth Wilson
Winterlong by Elizabeth Hand
Immortal Mine by Cindy C Bennett
Unbridled and Unbranded by Elle Saint James
The Secret Letters of the Monk Who Sold His Ferrari by Sharma, Robin
Girl 6 by J. H. Marks
Good Girl (Playroom) by Chilson, Erica
Poser by Alison Hughes
The Sword and the Flame by Stephen Lawhead
Our partner