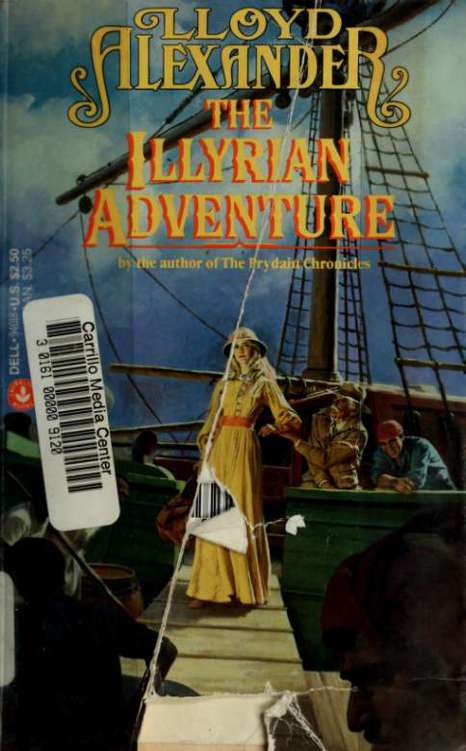 for my daughter and for my grandchildren

Miss Vesper Holly has the digestive talents of a goat and the mind of a chess master. She is familiar with half a dozen languages and can swear fluently in all of them. She understands the use of a slide rule but prefers doing calculations in her head. She does not hesitate to risk life and limb— mine as well as her own. No doubt she has other qualities as yet undiscovered. I hope not.

But I am getting ahead of my account. I should begin with that day in 1872 when my wife, Mary, and I drove to the Holly estate in Strafford, near Philadelphia. Vesper herself received us in the hallway of the main house. She expected us. What I expected was a pallid little orphan.

What I saw was a girl of sixteen, almost my own height, with sharp green eyes and waist-long hair of an astonishing marmalade hue. She wore a red caftan and purple slippers. She did not appear to require consolation.

"The first thing," said Vesper, "is what shall I call you.^

The second thing is lunch." She clapped her hands. "Hop-la! Come along, Moggie."

Vesper directed this order not to us but to an enormous orange cat who scampered after her as she led us into the drawing room. The casement windows had been opened; it was one of those mild March days which Philadelphia, with Quaker thriftiness, doles out sparingly. Vesper settled into an armchair and propped her long legs on a Turkish hassock. Moggie sprang to her lap and curled up there. Vesper noticed that I was looking puzzled by her unusual garment.

"Father sent it from Algiers," she said. "He'd have wanted me to wear it. Why pile on black veils.-* They don't help. They only make you look like a walking obituary.

"Now, what should it be?" Vesper went on. "Aunt Mary.^ Yes, I like that." She cupped her chin in her hand and studied me carefully. "Professor? Professor Garrett? No, that won't do."

"That sounds like something being poured out of a jug," said Vesper. "Father always called you 'Brinnie.* So will I. You're definitely a Brinnie."

Having settled the question. Vesper glanced at the letter I handed to her. I had received it that morning from the law offices of Kenge Carboy. It notified me that my old friend and traveling companion, Dr. Benjamin Rittenhouse Holly, had died on the Greek island of Mykonos; I had been named executor of his estate and custodian of his personal papers, charged with ordering them for eventual publication.

Further, to our surprise, Mary and I had been appointed guardians of his daughter.

"I already know about that," said Vesper. "I'm glad. Father was fond of you, Brinnie. He wouldn't have chosen anyone else."

I told Vesper I was touched and flattered.

"Better than flattery," said Vesper. "He trusted you absolutely. He also knew you were rich enough not to want to line your pockets with my money. And you did save his life once."

Mary blinked at me. "You never said a word about that."

"It's true," said Vesper. "Father wrote me. In Ankara, a pack of bazaar ruflians would have sliced him to pieces if Brinnie hadn't come to the rescue. He told me Brinnie fought hke a tiger."

Her father, I reminded Vesper, was known to exaggerate.

"Don't be modest, Brinnie." Vesper grinned at me. "I'm sure you were a wonderful tiger."

Vesper pursued the subject no funher, as the housekeeper summoned us to lunch. Vesper attacked her food with an enthusiasm I had witnessed only among the starving nomads of the Sahara. I was still somewhat at a loss for words. Not so with Vesper. Between consuming her meal and feeding tidbits to Moggie, she went on about everything from electromagnetism to a whimsical book by an English clergyman. She was indignant that Mrs. Anthony might face prison for insisting on females' right to vote. She also gave us a few brief details concerning her father's last days. In accordance with his wishes, his remains had been consigned to a blazing pyre on the beach, the ashes scattered to wind and waves.

"That's marvelous," Vesper said. "I'd want exactly the same. The open sky, the bright flames, the wine-dark sea. Of course, I'd expect the weather to be decent.

"Oh— Brinnie, there's something else," she added. "It's important. We'll talk about that once you've settled m.

"Here," said Vesper. "Where better?" She turned to Mary. "There's enough room for the Grand Army of the Potomac. You'll have a whole suite to yourselves. With all the papers to sort out, Brinnie can't rattle back and forth between here and Clifton Heights."

Mary was as much taken aback as I was. Vesper had calmly suggested what amounted to a complete upheaval of our lives. Mary had her garden to tend. And I, since exchanging the hardships of travel for domestic bliss, had taken up the gentle art of beekeeping; funher, to occupy my time, I had begun writing a history of the Etruscans. Vesper's proposition, though generous, was impossible.

"Bosh," said Vesper. "Aunt Mary will have acres of garden. I'll send a wagon to fetch your beehives. There's every book you'll need in the library."

Four days later, we moved in with Vesper.

"Brinnie, have you ever read the Illyriad?" Vesper came into the library, where I was in the midst of reconciling the household accounts: one of my duties as guardian-executor. A week had passed since Mary and I had been installed—very comfortably—in the Strafford residence, but I had scarcely begun sorting through Holly's papers. Vesper, most of that morning, had been playing her banjo. Its exuberant, saucy plunking assailed me from the drawing room, distracting my attention from financial details.

With the instrument under her arm, Vesper perched on the edge of the desk. She wore her customary daytime garb: a costume featuring a pair of loose-fitting pantaloons, much like that garment the formidable Mrs. Bloomer once made so popular.

"The Illyriady" repeated Vesper, as I looked up a little blankly. "You must have read it."

Yes, of course I had—in the child's version and, later, in its entirety. These days, alas, few know it in either form. This twelfth century epic is Illyria's great classic of literature; indeed the only one produced by that country.

"Brinnie, what do you think of Illyria?"

"I think of it," I replied, "as infrequently as possible."

My knowledge of that pocket-sized kingdom on the eastern seacoast of the Adriatic was, in fact, sketchy. In the twelfth century, a people of Turkish extraction, the Zen-tans, led by their illustrious King Ahmad, had invaded the country. They were opposed by King Vartan. His gallant but hopeless resistance had turned Vartan into a figure of legend—a mixture of King Arthur, El Cid, Charlemagne, and an unsuccessful George Washington. His heroic deeds had provided the material of the lllyriad.

Since those distant days, however, the ethnic Illyrians had been at daggers drawn with their Zentan overlords. The present government still spent most of its time and money putting down Illyrian uprisings. The place, in short, was a tinderbox.

"Father wanted to go there."

"That does not surprise me," I said. "Your father had a great liking for tinderboxes."

"He'd been studying the Illyriad before he died. He believed those tales were really true."

"Truly imaginary." I explained to Vesper that Vartan and Ahmad had almost certainly existed, but their deeds, as set forth in the epic, were altogether fantastic.

"Father didn't think so. Remember the part where Vartan captured Ahmad then let him go free.^ Ahmad was so impressed by Vartan's gallantry, he promised to send him a treasure beyond price. Ahmad went home, but died of his wounds before he could keep his promise."

I recalled the passage. A touching scene, but highly improbable. Monarchs in the real world seldom worry about keeping promises.

"Then," said Vesper, "Ahmad's vizier sent an army of magical warriors against Vartan. They beat the Illyrians, Vartan retreated into a cave, and he's been asleep there ever since."

An army of magical warriors, I replied, was a perfect example of sheer fantasy.

"Magical, yes," Vesper said. "That part's fantasy. But they weren't ordinary warriors. There had to be something unusual about them. Clockwork figures. Mechanical men. Whatever they were, they really existed. Father believed it. "

I recalled Holly's theory. He had published it some years ago. It had made him the laughingstock of historians and archeologists. I said I thought he had given it up.

She handed me a sheaf of letters. "He sent me these. He was onto something. He didn't say exactly what, but it convinced him he'd been right all along."

I scanned the pages. Holly had given few details, but clearly he had something in mind that excited and fascinated him.

"What do you say to that, Brinnie?"

It was, I replied, a pity her father died before proving his theory. It would have been an astonishing and important discovery.

"Yes," Vesper said, "and a good sock in the eye for those idiots who made fun of him."

Regrettably, I said, it was too late. We would never know if he was right or not.

"I'm sure he was." Vesper's eyes fixed on some point visible only to herself. Her lips held a little half smile. I had seen the same look on Holly's face just before he proposed swimming a crocodile-infested river.

I assured her this was impossible. As her guardian, I could not allow her to embark on such a journey, even under my protection.

"Father said you were a genius at organizing an expedition, working out the details—nobody came close to dear old Brinnie."

"That was long ago." I understood how much she wished to clear her father's reputation. But, in view o{ the difficulties and dangers, legal responsibilities did not permit me to encourage her, nor did common sense.

Three weeks later, I found myself putting the finishing touches to our travel arrangements.

During that time, I purchased and assembled equipment, had it crated and readied for shipment. I reserved staterooms on a steamer from Philadelphia to Naples and a coastal freighter from there to Illyria. I confess to a measure of enjoyment at being, as it were, back in harness. Even so, not a moment passed without misgivings. My knowledge of parental duties was slight—something to do with graham crackers and proper underclothing. But those duties certainly did not include dashing off to a country of furious Illyrians and, probably, bad drinking water. Mary, surprisingly, agreed with Vesper though I pointed out that I was the one who would have to take care of the dear girl.

While I collected maps, made inventories and timetables. Vesper dealt with the language problem. She dug out a mildewed grammar of Zentan, the official language, and one of Illyrian, spoken by the ethnic population. Since Zentan resembled Turkish, which we both knew, and Illyrian had familiar Latin roots, we soon had a working knowledge of both tongues.

Vesper continued to pore over Holly's last letters, hoping for a clue she might have overlooked.

"This place he mentions—Alba-Collia. I can't find it on the map. He wanted to go to some kind of horse festival."

This puzzled me. Holly had never been interested in livestock exhibits. Perhaps he was thinking of buying pack animals.

One obstacle lay ahead of us: the firman. This document was an authorization from the highest level of government. In Illyria, nothing could be done without it. A firman, I knew, was extremely difficult to obtain. Some petitioners waited for years only, in the end, to be refused.

"What." I cried. "You wrote directly to the king of Illyria.?"

"Why not? He gets letters like everyone else, doesn't he?"

"Of course not," said Vesper. "I told him he needn't write back. We'd see him as soon as we got there."