Read Alice I Have Been: A Novel Online

Alice I Have Been: A Novel 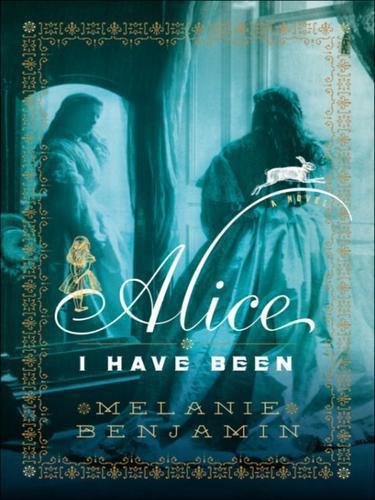 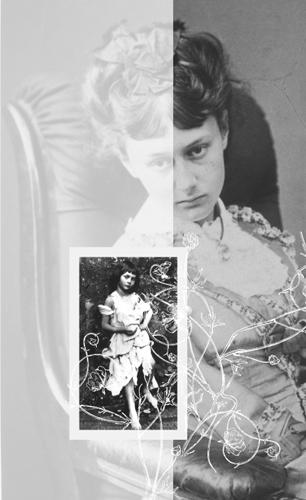 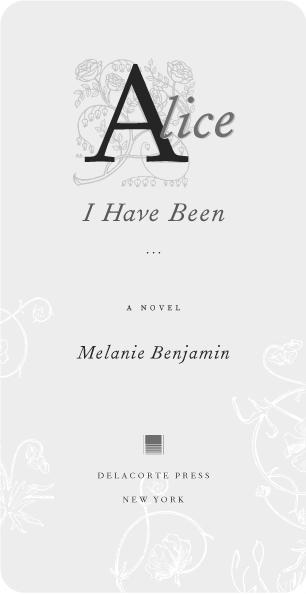 To Nic, for leading me to
the Rabbit Hole

I
T’S NOT OFTEN AN AUTHOR CAN SAY A BOOK TRULY WOULDN’T
have been written without one person’s influence, but
Alice I Have Been
would never have come about were it not for my dear friend and writing partner, Nicole Hayes. Gratitude doesn’t even come close to expressing how I feel about her, but it will have to do.

My wonderful agent and friend, Laura Langlie, must also be thanked for her support, dedication, and unwavering belief. To Kate Miciak, the most enthusiastic, understanding, terrifyingly smart editor ever—thank you for loving
Alice
as much as you do.

I also have to thank Nita Taublib, Randall Klein, Loyale Coles, Carolyn Schwartz, Quinne Rogers, Susan Corcoran, Loren Noveck, and everyone else at Bantam Dell who has done so much for
Alice
and me. Also thanks to Peter Skutches, Tooraj Kavoussi, and Bill Contardi.

Judy Merrill Larsen and Tasha Alexander also deserve a big thank-you for putting up with my authorly angst.

Karen Schoenewaldt at the Rosenbach Museum and Library and Matthew Bailey at the National Portrait Gallery in London were very helpful in my search for images of Alice Liddell. I am also indebted to several books and websites concerning Alice Liddell and Charles Dodgson.
The Other Alice
by Christina Björk and Inga-Karin Eriksson (a charming picture book),
The Real Alice
by Anne Clark, and
The Lives of the Muses
by Francine Prose helped immensely in establishing biographical facts about Alice Liddell and her family. I found the website “Alice in Oxford” (
http://www.aliceinoxford.info
) to be very helpful as well. Also the Lewis Carroll home page (
http://www.lewiscar roll.org/carroll.html
), operated by the Lewis Carroll Society of North America, was useful, as was the site for the UK Lewis Carroll Society (
http://lewiscarrollsociety.org.uk/index.html
).
The Life of John Ruskin
by W. G. Collingwood was also of help.

Of course, I could not have written this book without rereading Lewis Carroll’s
Alice’s Adventures in Wonderland
and
Through the Looking-Glass
.

Finally, I have to acknowledge my family—Pat and Norman Miller, Mark and Stephanie Miller, Mike and Sherry Miller; thank you all for the support and good wishes.

And as always, my love to Dennis, Alec, and Ben. Without you, none of this matters.

But oh my dear, I am tired of being Alice in Wonderland. Does it sound ungrateful? It is. Only I do get tired
.

I pause, place the pen down next to the page, and massage my aching hand; the joints of my fingers, in particular, are stiff and cold and ugly, like knots on a tree. One does get tired of so many things, of course, when one is eighty, not the least of which is answering endless
letters
.

However, I cannot say that, not to my own son. Although I’m not entirely sure what I am trying to say in this letter to Caryl, so kindly inquiring as to my health after our hectic journey. He accompanied me to America, naturally; if I’m being completely truthful, I would have to admit my son was much more excited about the prospect of escorting Alice in Wonderland across the ocean than Alice herself was in going.

“But Mamma,” he said in that coy way—entirely ridiculous for a man of his age, and I told him so. “We—you—owe it to the public. All this interest in Lewis Carroll, simply because it’s the centennial of his birth, and everyone wants to meet the real Alice. An honorary doctorate from Columbia University.” He consulted the telegram in his hand. “Interviews on the radio. You simply must go. You’ll have a marvelous time.”

“You
mean you’ll have
a marvelous time.” I knew my son too well, knew his strengths and his flaws, and unfortunately the latter outnumbered the former, and they always had. When I thought of his brothers—

No, I will not. That is uncharitable to Caryl and painful to myself.

Surprisingly, when the time came I did have a marvelous time. So much fuss made over me! Bands playing when the ship docked, banners everywhere, even confetti; endless photographs of me drinking tea—so tedious, but the Americans simply could not get enough of
that
. Alice in Wonderland at a tea party! Imagine! It was a miracle they didn’t ask Caryl to dress up as the Mad Hatter.

However, to be feted by scholars—it took me back, in such an unexpected way, to my childhood, to Oxford. I hadn’t realized how much I’d missed the stimulating atmosphere of academia, the pomp and circumstance, the endless arguments that no one could win, which was never the point; the point was purely the love of discourse, the heat of the battle.

Shockingly—and despite what I had been warned—I found everyone in America to be perfectly charming, with the exception of one unfortunate youth who offered me a stick of something called “chewing gum” just prior to the ceremony at Columbia. “What does one do with it?” I inquired, only to be told, simply, to chew. “Chew? Without swallowing?”

“To what end? What possibly could be the point?”

The young man could not answer that, and withdrew his invitation with a sheepish smile.

I understand. I myself suffer it each time I consult a looking glass, only to wonder how the glass can be so cracked and muddled—and then realize, with a pang of despair, that it is not the glass that is deficient, after all.

It is not merely vanity, although I admit I have more than my fair share of this conceit. Other elderly dowagers, however, were not immortalized in print as a little girl, and not merely as a little girl but rather as the embodiment of Childhood itself. So they are not confronted by people who ask, always so very eagerly, to see “the real Alice”—and who cannot hide the shock, the disbelief, that the real Alice has not been able to stop time.

So, yes, I do get tired. Of pretending, of remembering who I am, and who I am not, and if I sometimes get the two confused—much like the Alice in the story—I may be excused. For I am eighty.

I am also tired of being asked “Why?”

Why did I sell the manuscript, the original version
of Alice’s Adventures Under Ground
, printed by Mr. Dodgson just for me? (Lewis Carroll I did not know; they are merely words on a page—
written by Lewis Carroll
. They have nothing to do with the man I remember.)

Why would the muse part with the evidence of the artist’s devotion? Even Americans, with their eagerness to put a price on everything, could not understand.

I look out the windows—the heavy leaded-glass windows, not as sparkling as I would wish; I’ll have to speak to Mary Ann about that—of my sitting room, which overlooks the lush, heavily forested grounds of Cuffnells. Today the clouds are low, so the tempting glitter of the Solent is hidden from view. I can see the lawn where the boys played, Alan and Rex (and yes, Caryl); the pitch where they played cricket; the paths where they first learned to ride and where they strode home with their first stag, accompanied by their father, so very proud—and I know I made the only decision possible. This place, this is my sons’ childhood, their heritage, and it’s all I have left.

The other, the simply bound manuscript posted to me one cold November morning, long after the golden afternoon of its creation—that was my childhood. Only it had never truly belonged to me; Mr. Dodgson, of all people, understood that.

The clock on the mantel chimes twice; how long have I been sitting here staring out the window? The ink on the nib of my pen has dried. I find myself doing such idle, silly things so often these days, these days when my thoughts scatter like billiard balls into their respective pockets, these days when I am so very tired, unaccountably weary; I even find myself dozing off at the oddest moments, such as teatime, or late mornings when I should be going over accounts.

Simply contemplating my eternal weariness provokes a yawn, and I look longingly at the chaise in the corner, with its faded red afghan thrown over the arm. I manage to stifle the yawn and tell myself sternly that it is only two o’clock, and there is much to do.

I fold the letter to Caryl neatly in thirds; I’ll finish it later. I open my desk drawer and remove a stack of letters bound with a worn black silk ribbon, letters that I have begun and not finished, for various reasons. I have learned, through the years, it is the letter not sent that is often the most valuable.

There, right on top, is the letter I began almost two years ago:

I received your kind letter of Tuesday last—

And that is all I have managed to write. Ina’s kind letter of Tuesday last also is within this bundle; I remove it, adjust my spectacles (really, the indignities of age are
most
trying), and peruse it once more.

I suppose you don’t remember when Mr. Dodgson ceased coming to the Deanery? How old were you? I said his manner became too affectionate toward you as you grew older and that Mother spoke to him about it, and that offended him so that he ceased coming to see us again, as one had to give some reason for all intercourse ceasing—

This is the letter that I long to answer, not the one from Caryl kindly inquiring as to my health. No, this letter, this ghost missive from my sister, dear Ina, dead now two years, almost. Yet the muddled memories she stirred up—the memories she always managed to stir up, or manufacture, as if she were a conjurer or a witch instead of a perfect Victorian lady—will not die with her.

Will they die with Alice? I often wonder. Before I am gone from this earth, before my bones lie in the churchyard, so far away from where those other bones lie, I do hope that others’ memories will finally fall away and I will be able to remember, with a clarity of my very own, what happened that afternoon. That seemingly lovely summer afternoon, when between the two of us, we set out to destroy Wonderland—my Wonderland,
his
Wonderland—forever.

So yes, I do get tired; tired of
pretending
to be Alice in Wonderland still, always. Although it has been no easier being Alice Pleasance Hargreaves. Truly, I wonder; I have always wondered—

Which is the real Alice, and which the pretend?

Oh dear! I’m sounding like one of Mr. Dodgson’s nonsense poems now. He was so very clever at that sort of thing; much cleverer than I, who never had the patience, not then, not now.

I remove my spectacles; massage the bridge of my nose where they pinch. My head is throbbing,
threatening
, and I do not like being in this state. The journey
was
exhausting, if I’m being entirely truthful. I am tired of being Alice, period; yet my memories will not let me rest, not as long as I’m reading through old letters, which is the surest sign yet that I have become a doddering old fool.

The chaise looks so inviting; it’s such a cold afternoon.

Perhaps I will lie down, after all. 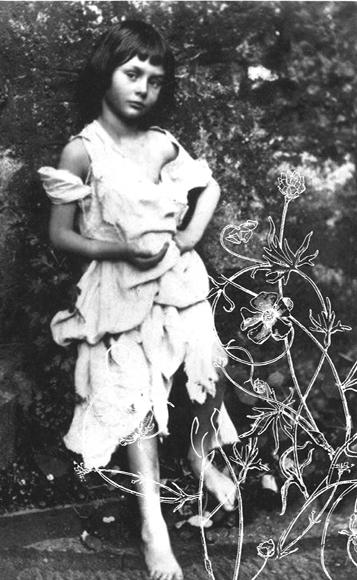