Read All Fired Up Online 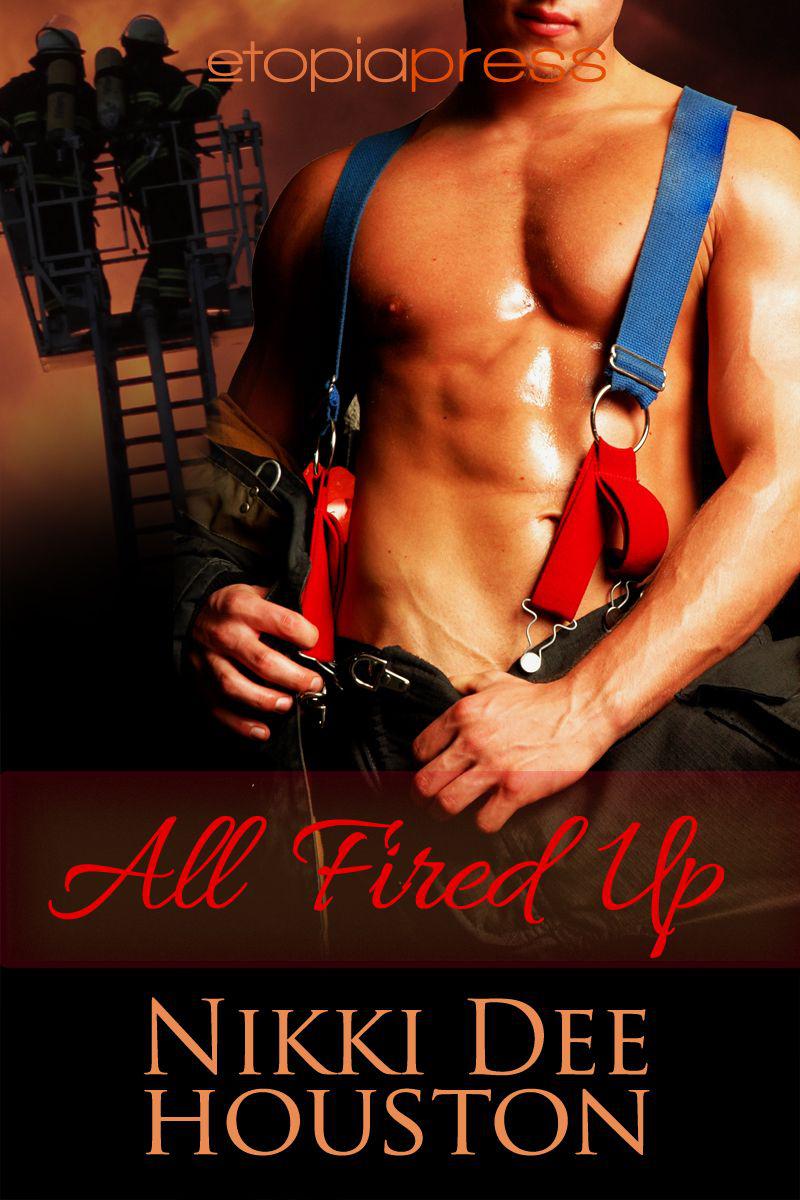 This book is dedicated to everyone in my life who supports me on my writing journey—my family and friends; members of YON Beyond Writing Group; RWA; and my amazing online writing buddies, especially Shey, Antonia, Anne, Susan, and Louise.

Thanks also to the team and editors at Etopia Press.

Cindy walked confidently into the day room of Hillwood Fire Station, her heavy, blue backpack slung across one shoulder. She scanned the room, noting the long lunch table surrounded by metal framed chairs. At one end was a dish sink and microwave. Crumpled, limp linen dish towels covered the surfaces of the bench space. A refrigerator hummed in the corner, its door and sides plastered in magazine clippings and photos, held on with magnets. Newspapers and magazines, scattered across the table in an untidy fashion, partially covered sticky coffee stains and grains of sugar.

Screwing up her nose at the mess, she decided that stowing her neatly packed lunch in the dirty-looking refrigerator would be a stupid thing to do. Instead, she decided to leave it where it was, in her backpack. Pulling out a vacant chair, she plonked her bag down on it, and put her hand to her hair. That morning she’d taken extra care to rein in her mop of unruly locks, severely pulling it back into a ponytail at the nape of her neck. The officer at reception had told her to come in here, make herself at home, and grab a coffee. Dirty, stained mugs—some still with brown sludge sitting inside—perched uninvitingly on the stainless steel draining board. Humph, she thought, fat chance of me using one of those.

She opened her backpack and pulled out a stainless steel water bottle. The engraving caught her eye—
Cindy ‘Cinders’ — Emergency Water Supply.
She smiled. It was a gift from one of her brothers on her graduation from the Firefighter Academy. She opened the lid and took a long drink, then stuffed the bottle back in her bag. She screwed up her nose as she surveyed the uninviting table. From beneath one of the newspapers, bright green eyes peered at her from a glossy photo. Casually reaching over, she flicked the paper aside, revealing more of the face. A small laugh escaped her lips. A calendar. A fireman calendar. What a joke. She would have thought it more appropriate for them to have the female firefighter calendar there in that all-male bastion. Then again, considering she worked there, perhaps it was just as well they didn’t.

She picked it up to take a closer look at the firefighter for the month of April. His oiled and fake-tanned torso was sculpted like a Greek Adonis, six pack bulging. Red braces, holding up his bright yellow, fire resistant trousers, hid his nipples. The veins in his biceps stood out, tracing lines across his smooth, flawless skin. Below his navel, the baggy waistband hid God-knew-what. The trousers, voluminous and unflattering, looked incongruous around his incredible body. She forced her eyes to move back up to his face. A square, chiseled chin framed sultry, sensuous lips that seemed to mock her. An aquiline nose, strong and aristocratic, lay beneath those green, green eyes. They locked onto hers as though he was really seeing her. Surprisingly, her heartbeat got faster as she stared at those eyes. The calendar in her hands began shaking as she ogled the picture. A strange sensation stirred deep inside her.

A loud guffaw made her jump. Dropping the calendar, she looked up to see four men clearly checking her out. Heat infused her face.

She came back to earth, trying desperately to regain her normal composure. Before her stood four men with torsos like tree trunks—strong and thick. White T-shirts hugged their muscles, bulging even under no duress. They each wore navy blue work trousers and big, black boots.

Laughter filled the room. But not hers. Her heartbeat was still up, and a trickle of sweat ran down the back of her head onto her neck. Words stuck in her throat as embarrassment turned to anger.

The man who had spoken stepped forward, his red buzz cut glistening as he bent down and retrieved the calendar from the floor.

“Ah, it’s Dave. Mr. April himself.” More laughter burst from the trio of buffoons still gawking at her. “He won’t be happy about that.”

“I won’t be happy about what, Warner?” The curt voice, razor sharp, came from behind her, cutting through the room.

The big red-haired man’s face glowed crimson. His eyes flickered to whoever it was behind her, then down to the floor. The other men quietly retreated back through the door.

She watched them go, feeling the prickles of more embarrassment creep rapidly up her back. The light suddenly reflected off beads of sweat on redheaded Warner’s forehead. He was actually squirming. She let go of the breath she’d been holding, her heart rate slowing slightly.

The voice from the man behind her was menacing. “One hour. My office.”

Warner’s Adam’s apple bobbed up and down. “Yes, Dave.”

The chastised oaf turned and rapidly exited, the door shutting behind him with a bang. An uncomfortable silence filled the room as she waited to be bawled out by the authoritative presence standing behind her.

“My apologies, Ms. Reece.” A chair scraped across the floor tiles. “Please, sit down.”

Taking a deep breath, she turned to see another big man in the same style of uniform navy blue trousers and white T-shirt, and clutching a buff colored folder in one hand. Her eyes were his chest height. Glancing up, she found him looking at her from beneath well-defined, dark, eyebrows. His eyes were emerald-green. His short, dark hair accentuated the set of his jawbone.

A huge hand reached out to her. “Dave Johnson. I’m the Captain. Welcome aboard.”

She hesitated, trying to regain her normal, cool composure. Reaching out, she took his hand in a firm grip, and nodded. “Thanks Captain. I’m Cindy.” He clasped her hand with his for just a moment. He seemed to be assessing her as he looked intently into her eyes.

“Nervous?” He let go of her hand and indicated the seat. “It’s tough leaving the relative safety of the academy and taking up your first posting.” His voice was businesslike, but friendly.

Relaxing slightly, she smiled as he reached out and pulled another chair over, facing her. “Y-yes. A bit. But I adapt quickly to new situations.”

A broad smile lightened his otherwise stern face. “Glad to hear it.” He nodded towards the back door. “Er, sorry about the welcoming committee. I don’t tolerate any form of rubbish here. Trust me, it won’t happen again.”

Again, a flush of warmth crept up her face. She glanced quickly down at her hands, clasped lightly in her lap, then looked up into his remarkable green eyes. “Thank you.”

Opening the folder he’d been holding, he extracted several forms. “I need you to fill these out before we get you started. Then we’ll get you kitted out with your uniform and protective safety gear. Once you’ve done the induction, you’ll be going out on the trucks. No internal building fires for you for at least a month. Is that clear?”

“Dave. Everybody calls me Dave.” He stood up, pushed a pile of old newspapers across the table with the back of his hand, and dropped the paperwork in a clear spot. “When you’ve filled those out, bring them to my office. Up the corridor and first on the left. Help yourself to coffee.”

He must have noticed the look on her face. “There are disposable cups in that cupboard. Don’t want you getting poisoned.” He flashed another smile before turning and walking briskly out of the room.

She stared after her new boss for a moment, slightly perplexed. He looked so formidable, yet he had been kind, especially after her horror first morning with the buffoons. Rummaging in her bag, she found a pen and began filling out the reams of paperwork. Halfway through, she went over to the cupboard, found a cup, and made herself an instant coffee. It tasted awful, but it was better than nothing.

Half an hour later, she gathered the forms, and walked toward his office. The door was open, revealing a desk strewn with thick books, files, and paperwork. He sat in front of a computer, staring at the screen. She tapped on the doorjamb, and he looked up from behind gold framed spectacles.

“Finished already? Good. Take a seat, Cindy.” He took off his glasses and rubbed a hand over his face. “The paperwork in this job is relentless. Would you mind if I just finish this report? Won’t take me a minute.” He replaced his spectacles and turned his attention to the computer, his brow furrowed as he concentrated on what he was working on.

She sat back and glanced around his small office. It wasn’t tidy, but not altogether messy either. Sort of organized chaos, she thought. The walls were covered in framed citations and awards, and the occasional portrait of men in firefighter uniforms. Her breath caught in her throat when she saw the familiar colors of the female firefighter calendar hanging by a brass thumbtack on the corkboard in the far corner. It was still open at January, whereas it was now March. Her heart sank as she realized it would just be a matter of time before someone turned to April and saw her photograph.

“Right. Thanks for waiting.” He hit a key on the keyboard and the printer in the corner started up with a loud rumble as it began to process the document. She passed him the forms and waited as he glanced at them briefly before putting them into a new folder with her name written in big black letters on the front. He sat back in his chair and looked at her as he spoke.

A Shade of Vampire 16: An End of Night by Forrest, Bella
Agency Rules - Never an Easy Day at the Office by Khalid Muhammad
All the Right Stuff by Walter Dean Myers
One Stolen Kiss by Boutain, Lauren
Jack Templar and the Lord of the Werewolves (Book #4 of the Templar Chronicles) by Jeff Gunhus
The Epherium Chronicles: Echoes by T.D. Wilson
Three Times Lucky by Sheila Turnage
Shockball by Viehl, S. L.
Hot Buttered Strumpet by Mina Dorian
Jinxed by Inez Kelley
Our partner