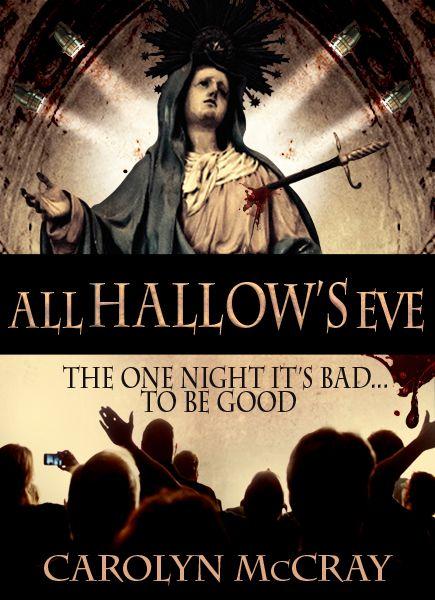 P
raise for
All Hallow’s Eve
…

“Scary and smart,
All Hallow’s Eve
is perfect for anyone who wants to read a horror story that makes them think. From the intricate psychopathology of the serial killer, to the hair-raising tension, to the skewering of pop culture,
All Hallow’s Eve
is simply a great read.”

Your Need To Read

“Even in her horror novels,
Carolyn McCray
still brings her am
azing ability to create believable
characters that you love to root for
.
All Hallow’s Eve
is no exception. T
hank
you
, Carolyn
,
for writing
such
intelligent horror! Still scary, but so great to read.”

“Beautifully written and masterfully executed. You will keep guessing until the end who could have planned such a horrific night! Do not read this while alone in the house!”

“
Carolyn McCray
does it again. After her international best seller,
Plain Jane
, Carolyn
brings to life another thriller that takes you to the edge and beyond. Not for the faint of heart,
All Hallow’s Eve
is macabre, yet still manages to be heartfelt. But with people dying in the manner of the saints, we knew the body count would be high,
and Ms. McCray
did not disappoint
!”

About the A
u
thor

Other Works by Cristyn West

Father
Marcus
Gonzales knelt before the altar. From the cross, Jesus looked down upon him. Was that disappointment he saw in his savior’s eyes? Mottled light streamed through the stained glass windows encircling his church. The moon must be bright outside to so fully illuminate the darkened
sanctuary
.

He had let the staff go hours before. Having others around would not change the dire state of his parish’s financials. They had staved off cutting programs far longer than many churches. But in the end, the after-school athletic program would have to suffer, and they would need to abandon their
before-
school breakfast program altogether. Gonzales tried to keep a bright smile on his face for his board of directors and staff, but the situation weighed heavily upon him. He was glad for the peace of the empty church to allow his grief to finally run free.

A sound behind him forced
Gonzales
to choke back his tears. The church’s large oak doors creaked open. Strange. It was so late. It had been years since anyone had sought refuge in the church at such an hour. Perhaps if more did, they would not be in this financial predicament.

Gonzales turned to find three young street kids entering his church. He should have known. There would be no last-minute benefactor to save the programs he held so dear.

Still, he tried to be patient. “It is well past normal worship hours, my children.”

The tallest of them sneered. “We’ll worship whenever we want.”

“That may be true, but you will need to find somewhere else to express your devotion.”

A steel chain swung from the leader’s belt as he swaggered up the aisle. His pants were so low that only by nearly crouching down did he keep them on.
Gonzales
noted the threadbare boxers underneath. He had to keep in mind these wannabe-gangbangers’ origins. Not unlike his own. Poor, hopeless, and desperate. Exactly the triad that gangs exploited.

“I think we’ll do it right here, Padre,” the boy who thought he was a man announced. “Especially after you open that donation box.”

Gonzales
did not flinch. “Or?”

That seemed to confuse his would-be robber. He stuttered for a moment.

“Or,” the boy said, then pulled out a switchblade. “Or I’ll kill your ass.”

The father hated to tell the child that it would take a far larger blade to impress him. He had seen more dangerous
toothbrush
shanks in prison. Instead, Gonzales looked past the leader to the youngest member of the trio. Underneath that backward cap and bandana tied in gangsta fashion was a boy he once knew.

“
T
omás,” he asked, “did you learn nothing from your brother’s death?” The boy shuffled his feet, looking anywhere but into
Gonzales
’ eyes. “You used to come to Sunday school together, did you not?”

He could reach
Tomás
. He
had
to reach T
omás before his life ended as tragically as Enrique’s did. “He’s in heaven,
Tomás
. Looking down upon you now.”

“Leave him alone!” the leader shouted, stepping between
Gonzales
and the boy.

Tomás
seemed to gain strength, now that he was not under
Gonzales
’ eye. “He didn’t go nowhere but in the dirt!”

Gonzales
smiled sadly. “As are the saints.”

“Shut the f— up!” the leader shouted.

But the angrier the boy became, the quieter
Gonzales’
mind became, and the softer his heart felt toward these poor, lost souls. He knew the temptations of the street. He knew the strong draw of a gang and the feeling of power to hold another’s life in one’s hand.
Gonzales
needed to show these boys that there was another path. A righteous path.

“There is a saint for all. Even you,” he said to the leader.

“You better hope yours is gonna show up, ’cause I’m about to
stick
you.”

Gonzales
chuckled. The boy thought swagger was bravery. Instead of retorting or retreating, the father opened his arms wide.

The boy did not seem to know what to do. He looked at his gang-mates. The chubbier one goaded him on. “He’s bluffing!”

Oh, but
Gonzales
was not. Even though the leader brandished the knife, the father walked forward until the tip of the knife pushed up against his coat.

“Me, too!” the other agreed, then, despite his earlier words, he turned and ran out of the church with
Tomás
.

The door slamming shut behind them echoed through the church. The leader’s hand shook as he tried to keep the knife up and against
Gonzales
.

“Choose your words carefully, my son,”
Gonzales
said. “You never know when the Lord might be listening and grant your wish.”

The boy tried to act brave, but his eyes darted from the door, to the tip of the knife, and back to the door.

“Screw it!” the leader yelled, as he ran down the aisle. He grabbed a fistful of bills from the collection plate on his way out the door. Given the state of the economy, the poor boy only snatched a few ones for his trouble.

Gonzales
sighed heavily as the door closed behind the thief. He took a moment to gather himself as his own hands shook. Clearly, after all these years, he had lost much of his swagger as well.

Slowly, he walked to the door and bolted it shut. To live in such times that a church had to lock its doors at night. He leaned against the stout wood, closing his eyes in prayer.

“God, grant these children safety through this dark night…and from themselves as well.” He peeked an eye open. “And I wouldn’t mind an alarm system while you’re at it.”

He chuckled to himself. God seldom answered prayers in such specific ways.

Gonzales
knew that he should call the police, but as he said, the hour was late. Besides, he did not want to have to bring the law into the matter, if possible. He would visit
Tomás
’ mother in the morning. From her, he felt certain that he could discover the identities of the other boys—and speak with their parents as well. Although the youth center was closing down, he still counseled those who had lost the path.

A clang came from behind the altar. Had the boys circled around to the back of the church? Had he misjudged their intent? Then some loud, dark, rock music blared from the confessional.

“Hello?” he called out, but no answer greeted him.

Cautiously,
Gonzales
made his way to the far side of the church. This was not the type of music
Tomás
and his
friends
listened to. They were mesmerized by the allure of rappers, with their pimps and hos.

The throbbing music and screeching singer sounded nothing like that.

Demonic lyrics? Was this some kind of strange prank?

Perhaps a different type of initiation?

He came alongside the confessional. The foul music was definitely coming from inside. Frowning, he jerked open the door to find a boom box on the seat. He hit the Stop button. The CD slowly spun to a stop.

Gonzales
stood for a moment, his hand shaking a bit. Why this small electronic device unsettled him more than the knife-wielding gang member, he did not know. An evil emanated from it.

“How does it feel to be so saintly, Father?” a mechanized voice asked from the other side of the confessional screen.

Steadying his voice,
Gonzales
replied, “I wouldn’t know, my son.”

This must be some new sort of gang initiation,
Gonzales decided. Scare-the-priest-ha-ha-ha.
Gonzales
would not give them the satisfaction.

“Do you have something to confess?” he asked.

The tinny voice answered back. “Nope… Give me a minute, though.”

When no answer came,
Gonzales
backed out of the booth. He felt a call to the police was overdue. He turned toward the rectory, but was blocked by a figure dressed in a full Spanish Inquisition uniform. From the long, flowing robes to the hideous birdlike mask, the figure looked as though it had stepped straight out of a very dark period of history.

This was no gang member who stood before him. This was evil given human form.

Dark eyes twinkled behind the gilded mask, clearly enjoying
Gonzales
’ fear. The father turned on his heel, trying to flee deeper into the church. If he could reach a phone, or if one of his loyal staff had lingered…

Gonzales
called out as he ran, but he had been very clear in his instructions. His staff was nowhere to be found. He was but a few feet away from the rectory door when something hit his back. He stumbled trying to keep his feet, but he couldn’t.
Gonzales
cried out as his knees hit the floor. Twisting around, he found a huge cross—tapered like a spear—sticking out from his back. He coughed up blood and slumped to the floor. The figure leapt toward him.

A
very modern tennis shoe
kicked him in the chin.

The world spun as
Gonzales
, in one last effort, tried to crawl away.

“Tsk, tsk, tsk,” the mechanical voice chided as he kicked again. “I guess being a saint ain’t what it’s cracked up to be.
”