Read All of You Online 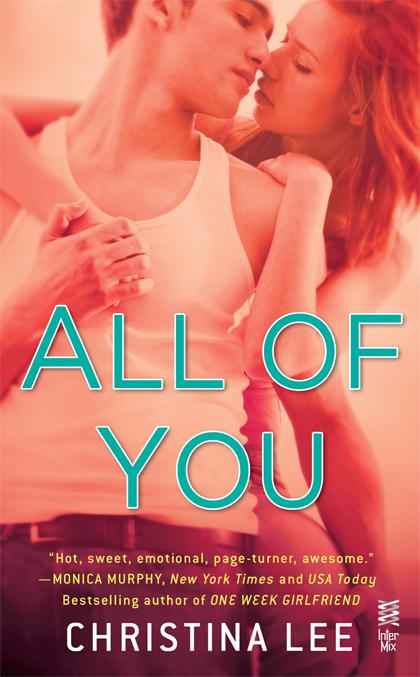 To Greg, for allowing me to go first. That means . . . everything.
Chapter One
Love was like a loaded gun. You slid your bullet inside the cold metal chamber as a safeguard for the

inevitable day that everything went to shit. At the first sign of trouble, you blew your opponent to

pieces, long before their finger found the trigger. At least that’s what my mother’s string of failed

I downed the warm beer and scanned the frat party from my armchair perch. The low moans

drifting from the next couch over awakened a longing inside me. My best friend, Ella, and her boyfriend

were going at it again. Our other friend, Rachel, an even bigger player than me, was in the far corner

making out with another university jock. And I wasn’t about to be the only one leaving empty-handed

Guys were easy to figure out—at least in the hormonal sense. You needed only appear helpless or

me. Maybe I’d text Rob for a booty call on my way home. He was always good for one, unless he’d

already hooked up with someone else.

My gaze landed on the guy entering the back door through the kitchen. A red baseball cap was

slung low on his head and inky black curls escaped beneath it. His arms were muscular, and his charcoal

T-shirt hugged his lean chest. He was Grade A Prime Meat and probably knew exactly how to put those

full lips to good use.

I watched as he high-fived one of the guys and then propped his forearm against the counter. His

smile was magnetic, and I pictured him using it on me in another five minutes, when he sweet-talked me. I stood up and straightened my shirt so that it revealed more of my cleavage—the little I had—and

strode toward the keg with my plastic cup.

As I drew nearer, I saw how alarmingly gorgeous this guy really was. The one hand fisted in his

pocket tugged at his jeans, revealing a small sliver of a taut stomach. The trail of baby-fine hairs leading

downward made heat pool low in my stomach.

I tried catching his eye, but he wasn’t going for it.

His friend was a different story, though. He practically growled in my direction.

The friend was cute, too, but paled in comparison to Hot Boy. But maybe his friend was my ticket

in. Too bad I wasn’t the type to take on both of them—that might be entertaining.

Bile scorched the back of my throat.
Hell, no.
Two meant more testosterone, less power. No telling

what might happen, even if I
thought
I was in control. There was a reason I only did one willing guy at a

When I stopped at the keg, I overheard Hot Boy telling a friend that he was moving in the morning.

Hopefully not out of state. No matter; I only needed him for tonight. His voice was low and gruff,

sending a ripple of satisfaction through me.

Hot Boy’s friend reached over and grabbed hold of my cup. “Let me help you with that.”

Hot Boy looked up and our gazes meshed for the first time. Warm chocolate eyes pinned me to my

spot. They raked over me once before flitting away, sending my stomach into a free fall.

He pushed aside the messy bangs hanging in his eyes and resumed his conversation.

I wanted to run my fingers through those unruly curls at the nape of his neck. I made a mental note

to do that later, when he was lying on top of me.

His friend handed my cup back, filled to the brim. Hot Boy didn’t look my way again.

“Thanks.” I clenched my teeth and worked to keep my lips in a neat, straight line.

“So, what’s your name?” he asked as he stepped closer. His breath was sour with beer and

cigarettes and I knew I could’ve taken him oh-so-easily. As simple as the arch of my eyebrow. But I didn’t want him. I wanted Hot Boy. Just for one night.

“My name’s Avery,” I said, loud enough for Hot Boy to hear.

Hot Boy only paused at the sound of my voice without looking my way.
Damn.
Maybe he had a

girlfriend, or maybe he was gay. The pretty boys always were.

“Nice to meet you, Avery. I’m Nate.” His friend slid his hand to my hip, and I considered giving up

the hunt and taking him upstairs. But for some reason, I just wasn’t feeling it.

“I’ll be right back.” I left him swaying unsteadily on his feet.

I headed back to Ella and Joel, who were still hot and heavy on the couch.

Ella came up for air. “No prospects tonight?”

“One.” I glanced over my shoulder to the kitchen. Hot Boy’s friend was still waiting for me. “But

I’m not really into it.”

“Bitch, you’re always into it.” Her lips curved into a devilish grin. “Gonna hook up with Rob

“Maybe.” I didn’t want to disappoint her. I was ready for a good time most weekends. And, even

though she didn’t really approve, she was ready for all the gritty details the next day. Ella hadn’t gotten

me to change my ways in high school, and she wouldn’t now. But if I wasn’t in the mood, I didn’t feel

I looked around for Rachel to say good-bye, but she was already somewhere private with jock boy.

Ella went back to ramming her tongue into Joel’s mouth.

She’d probably felt stranded by Rachel and me too many times to count, so seeing her with Joel

actually thawed a corner of my frozen heart. A real live boyfriend was what Ella had always wanted.

Someone who
got
her, she’d said. Whatever the hell that meant.

Hopefully Joel would keep treating her right, or he’d have to answer to me. I wasn’t opposed to

grabbing hold and yanking those balls down hard. My self-defense classes had taught me well. I decided to give Hot Boy one last shot as I passed by him on my way out the door, luring him with

my sexiest voice. Unfortunately that meant passing his friend, too.

“Excuse me.” My mouth was close to Hot Boy’s ear, my chest brushing past his arm. He smelled

like coconut shampoo. Like warm sand, hot sun, and sex. I wanted to wrap myself inside of his arms,

but I kept on moving.

“No problem,” he said without even a glance.

Damn. Rejected again. That made me want him twice as much.

Just as my foot crossed onto the landing, I felt a warm hand reach around my waist. I almost fist

pumped the air.
Got him.

I turned to greet Hot Boy, my breaths already fluttery. But the smile slid from my lips and slumped

to the floor when I realized it was his friend who’d grabbed me instead.

“I’m leaving.” I twisted away, hoping to break his embrace.

But he kept in step with me. “How about you hang with me awhile longer?”

His hands frisked around to my stomach, and normally I’d accept that kind of action—initiate it,

even—but for some reason I couldn’t shake Hot Boy’s rejection.

I was more of an emotional train wreck than even
I’d
realized. Despite Ella reminding me almost

And just as I was chastising myself and changing my mind about hooking up with his friend, I

heard Hot Boy’s low rumble of a voice. “Give it a rest, Nate. She said she was leaving, and I’m pretty

sure that means without
you
.”

I blinked in shock. Maybe he’d noticed me after all.

His friend backed away with his hands raised. And then turned to the keg.

Wait a minute, this was backward. I was thanking Hot Boy for being all chivalrous. And the boys I

hooked up with were
so not chivalrous
.

Hot Boy nodded before turning on his heels and heading out of the room, leaving my ego

collapsing on the cold hard tile.

Chivalrous Hot Boy was so not into me.

I walked the two blocks back to my apartment alone.

I tossed and turned, imagining Hot Boy’s lips on mine, a fire blazing across my skin.

class that evening. I’d gotten my LPN license and was working on my RN degree at the local university,

which was only five blocks away and was the exact reason I had chosen this apartment. It was an older

building, only five floors, with two apartments on each level. There was one laundry room per floor, and

the landlords were pretty cool—a middle-aged married couple with kids. I tried convincing Ella to move

in with me last year, but she was saving money by living at home.

And maybe living alone was for the best. The rent was cheap, and I’d become a creature of habit.

We’d probably only get on each other’s nerves. Besides, she crashed at my place enough.

My phone buzzed from the bathroom counter and I saw it was my mother. She wasn’t an early

riser, so something must’ve been up. Maybe she had broken up with her latest asshole and needed

consolation. Too bad I wouldn’t be giving it to her. Not since she acted like what had happened with Tim

four years ago was my fault, blaming it on how I dressed around him.

I told myself I’d never trust her or another man again.

She was in tears and wanted to use me as her sounding board. No surprise there. I only talked to her

to keep tabs on my baby brother, now a senior in high school.

“What happened—did what’s-his-name dump you?”

“No, I dumped him. Caught him cheating on me one too many times.”

Phone calls with Mom were a sobering reminder of why I didn’t get involved with guys. If you remained in charge of your life, they couldn’t mess with your head or put their hands on you without

your permission.
Not anymore
. Love was only a ridiculous fairy tale that was never satisfying, warm, or

Only I could provide my own security—like a steel cage around my heart.

“Maybe this is a good time for you to take a break from men. Focus on Adam. He doesn’t need all

of this drama in his life, or he’s going to move out when he’s eighteen, too.” I was always nervous about

how my brother would turn out with all those guys traipsing through the house. Would he become an

I’d had heart-to-hearts with him about how to treat girls despite what he saw going on at home. I

hadn’t told him about what happened with Tim—at least not the worst part of it. Ella was the only one

who knew everything. If you didn’t count the people who regularly denied it: Mom and Tim.

“I told you. I can take care of myself.” Besides, there were no good men out there. Except my

brother, who I was hell-bent on saving. He’d been dating the same girl for the last few months, and I

warned him about always using protection. The last thing he needed was to support a baby. But he’d told

me he’d stick by her if that happened. That he was in love.

I wasn’t sure how my brother had come out of that household unscathed. But I was afraid that he

was such a good soul, he’d be taken advantage of by someone.

“I know you can. But men are good for some things. I hate to think about you spending your life

And that’s when I needed to get off the phone. When my mother was preaching about the virtues of

men—even though she herself was some kind of homing device for losers, cheaters, and liars. Men who

either mooched off her, rent-free, or paid her bills as hush money.