Read All Shook Up (From the Files of Madison Finn, 22) Online

All Shook Up (From the Files of Madison Finn, 22) 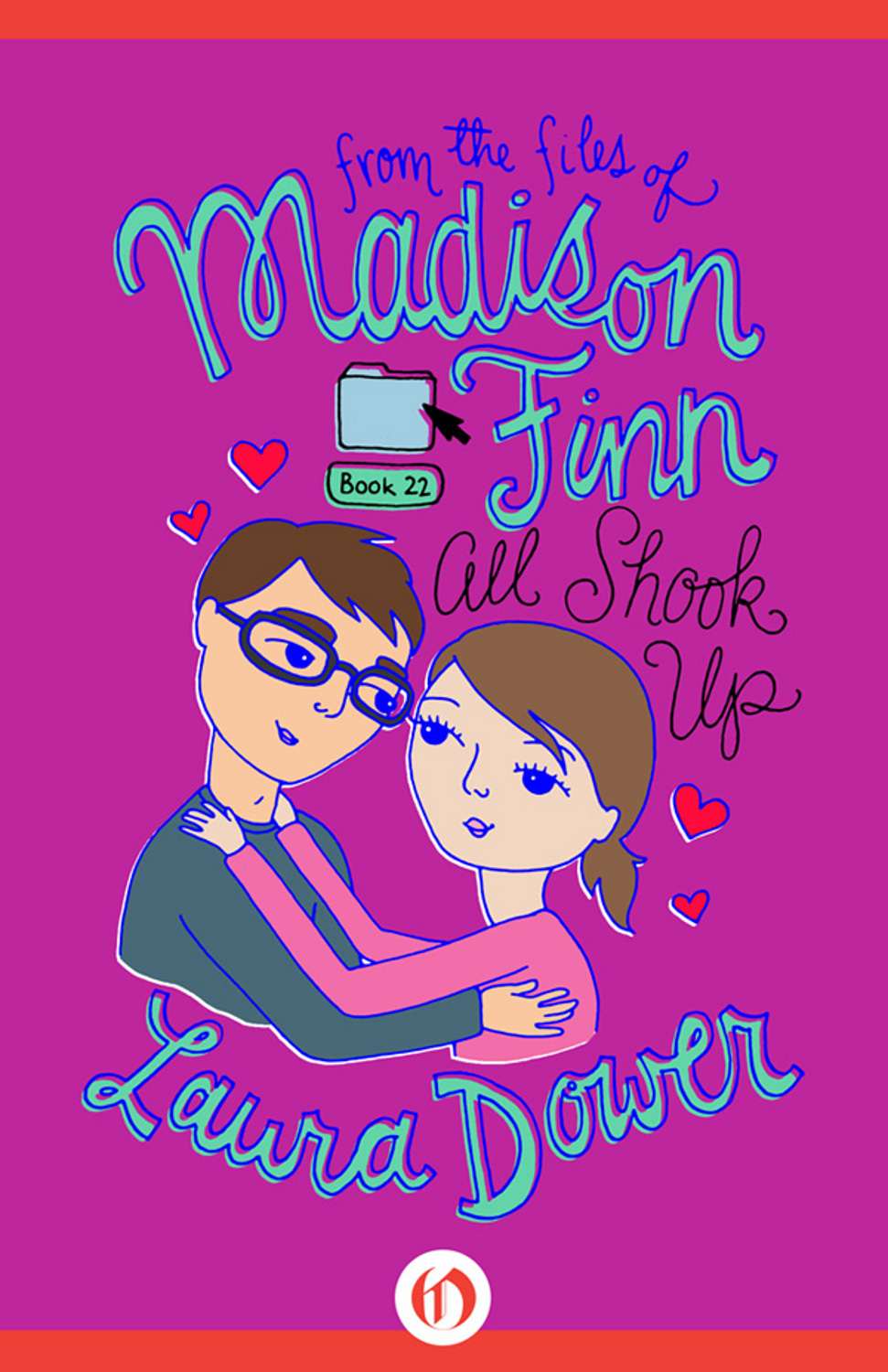 All Shook Up
From the Files of Madison Finn, Vol. 22
Laura Dower

For all the fans, who shake me up (in a good way)

F
ROM HER SEAT IN
Mr. Gibbons’s English classroom, Madison had a clear view of the school parking lot, a stretch of winding road that ran alongside Far Hills Junior High. More than anything, Madison wanted to race down that road for home.

But she was stuck inside English class. The students listened to Roger Willoughby, one of the smarter kids in class, as he presented a speech about himself. Roger had not only described his carrot-orange hair perfectly, but he’d slipped in a few jokes about his lisp, his bad handwriting, and his ability to perform magic tricks.

The class was in hysterics. He was a hit.

Madison’s mind, however, was elsewhere. Her gaze drifted from tree to tree outside the window as she silently considered how she could possibly give a speech without putting the entire class to sleep. She wrote in her files all the time, so it wasn’t as if she were a terrible writer or anything, but right now, hearing Roger’s jokes made her doubt her own speech-writing skills.

Whenever Madison thought too hard about something, her mind got all knotted up.

This was one of those times.

After Roger finished, everyone clapped politely, including Madison.

Hart Jones was next.

Hart was a great distraction for Madison; and for a fleeting moment, her doubts faded. Her eyes took in his perfect blue sweater and even more perfect faded blue jeans. His hair, his eyes, his mouth—
everything
about Hart seemed perfectly perfect.

Lately, Hart had moved from being Madison’s crush to being a very real deal. Everyone at school knew, or at least Madison’s friends all knew, that the pair had graduated to couple status. They’d actually held hands three times already: once at the movies, once on Madison’s front porch, and once in school—although just for five seconds, in the hallway. They had not done anything more than that, but Madison was one hundred percent certain that Hart was destined to be the great love of her life. Well, at least the great love of her seventh-grade life.

Hart’s speech mentioned hockey and books by Rick Riordan. He talked about family vacations every year; building a log cabin with his father; and the summer his pet dog Bingo died. Hearing about any dog dying made Madison feel a little sad; but knowing Hart had lost
his
dog made Madison feel sadder than sad. She wondered if that were why he didn’t have a pet right now.

Her turn was coming closer.

Madison glanced out the window again and sighed, trying to remember the details of her speech that she had tried to memorize at home the night before. She sneaked a peek at story notes placed on the desk in front of her. Her brain felt fuzzy.

Meanwhile, another girl—a stranger, really—began to read. Madison had often stared at the back of the girl’s head during class, but they had never spoken. All Madison knew was that the girl’s name was Madhur. It seemed impossible that two classmates could sit in a classroom together for so long and not know one another. But they had never had a reason to interact.

Madhur had long black hair wound up tightly in a snug tortoiseshell clip; it looked shimmery blue-black in sunlight. She spoke in a low voice with a light accent.

“My parents speak Punjabi at home,” Madhur said, quickly stringing words together like colored beads on a thread. “And then of course they also speak Hindi. And Urdu. And English sometimes … well … obviously. I mean, my mom wants me to learn as many languages as possible, but especially our family’s dialect. I was born here, but my grandmamma always tells me about Punjab, and I know I want to keep that place in my heart for always.”

Madison pricked up her ears when she heard the word “Punjab,” because she remembered a time when her own mom had flown over to Pakistan and India for a work-related project. She couldn’t believe that Madhur’s family was from a part of the world so far away.

“The Punjab state animal is the buck, also called
kala hiran
,” Madhur continued. “It has a black coat and spiral horns. When I was a little girl, my grandmamma got me a stuffed animal that looked just like it. Of course, I love animals.”

Madison found herself grinning when she heard that part, because of course, she loved animals, too. She and Madhur had some important things in common.

“Punjab is a part of the world that is rich with culture. I believe that knowing about my family history makes me a wiser person.”

Mr. Gibbons looked very pleased—and proud—as he listened to Madhur’s speech. His brown eyes did not stray from Madhur the entire time she read aloud. Neither did Madison’s, nor anyone else’s. Madhur had locked on to everyone’s gaze with some kind of invisible tractor beam.

“Grandmamma tells me stories about Punjabi thunderstorms. She always says the thunderstorms in the countryside deliver lightning that splits the sky into pieces.”

Madison’s mind lurched at that description. She imagined a blue sky cut apart like a puzzle.

“In many places, when the temperature has been so hot for so long, a thunderstorm is like the greatest gift. I like to think of the rain like that, like a gift for everyone in its path. Birds like mynahs and black hummingbirds dance on the telephone wires and trees. Of course, rain soon becomes the monsoon. Even though I have never seen one, never seen the sky turn dark like ink, I feel like I’ve experienced all of it. Punjab is a part of me, just like Far Hills is a part of me.”

The class let out a collective sigh as Madhur finished up. Almost without being aware of it, Madison began clapping enthusiastically. She couldn’t believe what a good writer Madhur was. How could one of her classmates have written such a beautiful and poetic story for a homework assignment?

When Mr. Gibbons and the other students joined in the clapping, Madison saw Madhur’s head dip down a little bit. Was she embarrassed by the attention?

A few of her classmates chuckled.

“Oh,” Madison said, recovering. “Of course. My speech.” She looked down at her notes.

The door to the classroom was ajar, and for a split second, Madison thought about running out of the room. She could make a clean getaway if she bolted right now … Madison’s hands felt all clammy and started to shake. Her voice wavered. She looked over at Madhur for encouragement; and Madhur gave her a wide smile.

Before she could get another word out, the final bell rang.

“I’m sorry that we’ve run out of time, Madison,” Mr. Gibbons said. “Why don’t we finish up next class?”

Madison had never been so grateful to hear a bell. “No problem,” she told the teacher.

As students filed out of class, Mr. Gibbons wrote on the board in big letters:
DON’T FORGET! JUNIOR WORLD LEADERS CONFERENCE IN LESS THAN TWO WEEKS!

“I just want to remind everyone who already signed up to assist at the conference that there’s an important meeting tomorrow. And for those of you who have not yet signed up, it’s not too late! This is the first time Far Hills has ever hosted a weekend event like this. It should not be missed!”

Madison and her friends had signed up a week earlier. The middle-school conference would feature panel discussions about important issues like hunger, AIDS, poverty, terrorism, and more. It seemed so exciting! One of Madison’s BFFs, Fiona Waters, had even been chosen as a speaker for the event. Unlike Madison, who preferred working
behind
the scenes, Fiona loved being center stage. Madison’s other longtime BFF, Aimee Gillespie, also loved the spotlight. Aimee was a ballet dancer who loved performing. Sometimes Madison wondered how people so different from her could turn into her best friends ever.

Everybody shuffled toward the door of the classroom. There were a few moments left before the next bell. Madison grabbed her bag and pushed toward the door along with everyone else. Madhur was already out in the hall.

Madison wanted to tell Madhur how much the presentation about Punjab had meant to her. And she had questions, too. But a crowd of kids was in the way, and Madhur seemed too far to reach.

Hearing her name, Madison turned around and collided with Hart. As they bumped, Madison felt Hart’s hand press into the small of her back.

“Hey,” he mumbled. “Great job on your presentation.”

Hart’s hand moved away from her back. Now he touched her shoulder.

“You going to Math?” he asked.

Madison caught a glimpse of Madhur out of the corner of her eye. She started to follow Madhur toward the next class.

“Where are we going?” Hart asked, sticking close to Madison as they walked down the hallway.

A cluster of their friends—Walter “Egg” Diaz; Drew Maxwell; Dan Ginsburg; and Fiona’s brother, Chet—appeared from around a corner.

Madison sighed. Her eyes darted around the hallway again, but Madhur was gone.

“Who you looking for?” Egg asked in his typical, obnoxious voice.

“No one,” Madison shrugged.

“Or the booger man,” Chet said, cracking up at his own lame joke.

Madison rolled her eyes. “No one, really,” Madison insisted. “Just this girl from class.”

“That girl Madhur,” Madison said. “She did such a great presentation, and I just wanted to tell her how much I loved it.”

Just then Egg, Drew, and Dan started a shoving match in the hallway. They weren’t listening. The second bell was about to ring.

“How do you know Madhur?” Madison asked Chet.

“Race you guys to Math,” Drew cried. All the boys dashed away, leaving Madison standing solo in the middle of the hallway.

“Later, Finnster!” Hart called back before disappearing with the rest of the group.

Madison slung her bag over her shoulder. She couldn’t believe that after all that time in seventh grade with her friends and classmates she had failed to notice someone as interesting as Madhur.

The bell! Quickly, Madison tripped down the hall toward Math, feet—and mind—racing.

A
FTER MATH CLASS, MADISON
headed for lunch. She still had Madhur on the brain—big-time.

Madison didn’t remember ever having seen Madhur in line for food or sitting at a table in the cafeteria. But today, there she was. It reminded Madison of something Gramma Helen always said, about how funny it was to learn a new word, because as soon as you did, that word appeared
everywhere
.

All Piss and Wind by David Salter
Fault Line - Retail by Robert Goddard
Honor's Paradox-ARC by P. C. Hodgell
On the Line by Kathryn Ascher
Death at the Manor (The Asharton Manor Mysteries Book 1) by Grace, Celina
The Dream by Jaycee Clark
The Era, 1947-1957: When the Yankees, the Giants, and the Dodgers Ruled the World by Kahn, Roger
Bowles, Jan - Tamed by the Dom [Guilty Pleasures 3] (Siren Publishing Everlasting Classic) by Jan Bowles
Rest in Peach by Furlong, Susan
The Need by Ni Siodacain, Bilinda
Our partner