All That Is Bitter and Sweet (3 page) 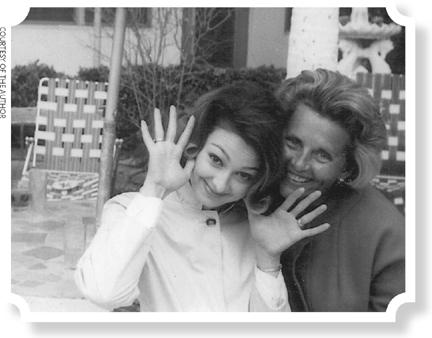 Mamaw and my mother. Before seeing this snapshot, I had not known they had shared lighthearted moments.

y favorite author, Edith Wharton, wrote in her autobiography, “My last page is always latent in my first, but the intervening windings of the way become clear only as I write.” So it has been with me as I have undertaken to make sense of my own past.

Although the home of my heart is in the Appalachian Mountains, I always considered it auspicious that I was born in Southern California, one of the most transitory places in the world, during one of the most turbulent springs in American history. When I arrived by cesarean section at Granada Hills Hospital on April 19, 1968, California was the epicenter of a society in the throes of a cultural and spiritual upheaval. The Vietnam War was raging. The nation was still reeling from the assassination of Martin Luther King Jr., and Bobby Kennedy would soon be gunned down at the Ambassador Hotel in Los Angeles, leaving a generation of idealists lost in a tide of grief and regret. Some of the flower children who had flocked to San Francisco for the Summer of Love were now panhandling for loose change along Hollywood’s Sunset Strip—a place I would soon know well.

My parents, Michael and Diana Ciminella, were small-town kids from rural eastern Kentucky. Like most everyone else in the Los Angeles basin, they had moved to California looking for a fresh start in what Joan Didion described as “the golden land where every day the world is born anew.” In 1967, my parents bought a tract house on a cul-de-sac in Sylmar, a suburb carved out of olive groves in the San Fernando Valley, about twenty miles north and a world away from Hollywood. My dad sold electronic components for the aerospace industry; my mom stayed home and seethed with boredom. They had dreams, just different ones. And they had secrets.

They had married too young and for the “wrong” reason—namely, the unplanned pregnancy that produced my older sister, Christina (you know her as Wynonna), when Mom was only seventeen. It was a typical story of the time: high school girl becomes pregnant and “has” to marry her teenage boyfriend. But there was a twist: Michael wasn’t the father of Diana’s baby—something he didn’t know at the time of the wedding, and something my sister and I wouldn’t learn for decades. When I came into the world four years later, my family’s troubled and remarkable course had already been set in motion, powerfully shaped by my mother’s desperate teenage lie and the incredible energy she dedicated to protecting it.

I began to understand the dynamics of my past, and how we are only as sick as our secrets, when I was thirty-seven years old and started on a simple and practical path of personal recovery. It was then that I discovered we all belong to two families: our family of choice and our family of origin. My family of choice is a colorful assortment of surrogate grandparents, aunts, uncles, and friends who infuse me with love, belonging, and acceptance. My family of origin, the one into which I was born, was also brimming with love but was not a healthy family system. There was too much trauma, abandonment, addiction, and shame. My mother, while she was transforming herself into the country legend Naomi Judd, created an origin myth for the Judds that did not match my reality. She and my sister have been quoted as saying that our family put the “fun” in dysfunction. I wondered: Who, exactly, was having all the fun? What was I missing?

As I write these words, I am happy to say that each of us has embarked on a personal process of healing, and my family is healthier than it has ever been. We have come far. In our individual and collective recoveries, we have learned that mental illness and addiction are
family
diseases, spanning and affecting generations. There are robust strains of each on both sides of my family—manifested in just about everything from depression, suicide, alcoholism, and compulsive gambling to incest and suspected murder—and these conditions have shaped my parents’ stories (even if some of the events did not happen directly to them) as well as my sister’s and my own. Fortunately, along with the dysfunction is a legacy of love, resiliency, creativity, and faith in a family whose roots I can trace back at least eight generations in the mountains of Kentucky and about 350 years in America, and as far as the shores of Sicily. That history is as much a part of my DNA as the arch of my eyebrows or the color of my hair. It’s imprinted in the soft r’s and long vowels that well up in my voice when I’m speaking about my home place or the way I whoop for my dogs from the doorway, barefoot, in a nightgown, assuming my mountain woman stance with a hand on one hip, a way of being as natural to me as breathing.

Although I now make my home in rural middle Tennessee, eastern Kentucky still calls to me. Kentuckians have a deeply ingrained, almost mystical sense of place—a sense of belonging that defines us. As a teenager, I took a friend to see my great-aunt Pauline’s farm. She passed away when I was in the fourth grade. Nevertheless, although I had not been there since I was ten years old, I navigated my car deep into the countryside, to her homestead on Little Cat Creek, without making a single wrong turn. More recently, after flying over catastrophic mountaintop removal coal-mining sites in Pike County, I drove to Black Log Hollow in Martin County, where my paternal grandmother was raised. When I pulled onto Black Log, something ineffable—without words and deeper than memory, from a place so primal that it transcends thought and conscious action—tugged at my soul. I went unhesitatingly to the first mailbox on the right. The stenciled name read “Dalton,” which was my paternal grandmother’s maiden name; I had found my great-grandparents’ home and realized that folks to whom I am kin lived there yet. I called on the residents, and like a cliché, the old woman inside accused me of being the law or a tax collector. The only thing missing was a rifle across her lap.

These mountains can hold dark secrets. Mary Bernadine Dalton, who became my Mamaw Ciminella, never talked to me much about her family or her years growing up. Her mother, Effie, was married at least five times. The husband who fathered Mamaw and her two sisters disappeared from the scene—she never said why, at least to me, although Papaw Ciminella, who loved family dearly and was a devoted reminiscer, told me that my great-granddaddy had hit Effie and she’d ended that marriage on the spot. Mostly, what I knew was that Mamaw was a gorgeous mountain girl with a luscious figure who, like the Kim Novak character in
Picnic
, fell for a charming, exotic outsider who loved adventure.

Michael Lawrence Ciminella (Papaw) was the son of Sicilian immigrants who had settled in western New York, on the shores of Lake Erie. His mother was a classic homemaker in the Italian tradition, his father had a good job making wine for Welch’s, and they were surrounded by a vibrant extended family. They raised five children together, including Papaw. But, according to my cousins, there was a dark side to this quintessential American story. A family member had raped Papaw’s mother, and his oldest brother was conceived in incest. I can only imagine the suffering that created in Papaw’s family as he grew up, and it may explain why he developed ulcers that kept him out of military service during World War II. As a young man, Papaw, after his exciting tenure in the Civilian Conservation Corps in the western states, which allowed him to discover his love of rambling, installed copper roofing and gutters up and down the Appalachian Mountains. It was on one of these trips that he met the beautiful Billie Dalton at a clandestine juke joint in Inez, Kentucky. He swept her away from the local hero she was dating and married her in 1944, after a six-week courtship. They moved to Erie, Pennsylvania, where he found a good job with General Electric building locomotives during the war. My father, Michael Charles Ciminella, who came along, was their only child.

After the war, Papaw and Mamaw briefly owned a diner in Erie until Papaw, who used to play some serious poker, lost the business to one of the local “hard guys” in a card game. His gambling days over (for a while, at least), Papaw moved his young family back to eastern Kentucky, where he worked as a brakeman for the C&O Railroad. He was a wizard with all kinds of metalwork, and he eventually turned a part-time business building and installing gutters and siding into the successful Ashland Aluminum Products Company.

Dad idolized his father, whom he remembers as outgoing, immensely competitive, hardworking, and honest. Papaw never lied or cheated to make a sale, and he expected people to pay him when and what they owed him. Mamaw, in her early years, was as outgoing as Papaw. They were a beautiful and stylish couple, accomplished dancers who enjoyed socializing and golfing at the country club. But Dad’s memory is that Mamaw grew more eccentric as she got older. She liked her house to be perfectly clean, neat, and orderly. She also tended to fret, particularly about the health of her only child.

Dad had come down with a bad case of rheumatic fever as a young boy. It took him years to recuperate, and the family moved to Florida during the winters to help him heal. Mamaw must have been terrified of losing him, because she nearly smothered him trying to keep him safe. He chafed at her vigilance, and when it came time for high school, he asked to go to Fork Union Military Academy in Virginia to slip out from under her watchful eye. Dad thrived there, academically and athletically. The once sickly kid had turned into an outstanding baseball player, whose achievements were chronicled in the local paper and who briefly considered going pro. When he was sixteen, his parents bought him a Corvair Monza so that he could drive himself back and forth to Ashland.

As soon as he received the car, Wendell Lyon, his best friend back home, enlisted him to drive him and his girlfriend, Linda McDonald, who would eventually become my godmother, to the movie theater over in Huntington, West Virginia. To seal the deal, Linda arranged a blind date for Michael with her pretty, fourteen-year-old across-the-street neighbor and friend, Diana Judd.

Unearthed by Robert J. Crane
Winter Wedding by Joan Smith
Last Chance to See by Douglas Adams, Mark Carwardine
Death by the Riverside by J. M. Redmann; Jean M. Redmann
Half to Death by Robin Alexander
Town Haunts by Cathy Spencer
The Bucket List by Gynger Fyer
The Plague Dogs by Richard Adams
End of the World Blues by Jon Courtenay Grimwood
Starting from Scratch by Marie Ferrarella
Our partner