All That Is Bitter and Sweet (5 page)

Dad lived with us there for a year, but the marriage had begun to deteriorate. Mom was working part-time as a model and a secretary in a production company, with hopes of breaking into show business somehow. She also started running around with a would-be actor who lived in the neighborhood, and Dad knew about it. I have a vague but aching memory from that time, when I was about three years old: I was alone in the backyard, sitting in the swing—probably because my parents were fighting inside the house—when Dad came out and knelt in front of me. He was moving out, and he’d come to say goodbye. I don’t remember the words, just the feeling of a silent hole opening in my young life.

Dad moved in with a buddy from work who had a place in Manhattan Beach. I used to stay with him once in a while. I remember sleeping there on strange, dark sheets and sucking the life out of my thumb.

The would-be actor Mom had been dating moved in with us after Dad left. He made our lunches and babysat for Chris and me while Mom worked as a receptionist in a Century City law office. I was too young to know what “normal” was supposed to be, but I felt very uneasy around this man. He gave Gabrielle, my friend who lived across the street, and me the creeps. Another character peopling my young world was Joanna Cole, who rented space in our basement. I used to love escaping down into her “lair.” I would screw up my courage to pick my way down the dark, narrow stairs, from where I could see her twin bed pushed in the corner of the basement. She always welcomed me warmly and began reading to me, especially
The Lion the Witch and the Wardrobe
, which initiated my intense wonder with stories. In 1972, Mom’s younger sister, Margaret, moved in with us, too. As Mom put it, she had eloped as a young teen with the wrong man back in Kentucky to escape their parents’ worsening marriage and just as quickly divorced the boy. She had a sweet baby daughter, Erin, who was four years younger and like a sister to me.

Aunt Margaret didn’t like Mom’s live-in boyfriend one bit, and she was adamant that she would not tolerate being around physical abuse, which was happening in the house. She told Mom she had to choose between her or the boyfriend, and Mom, for a period of time, chose the man. After Aunt Margaret left, things went downhill fast. According to Mom, he turned out to be a full-blown heroin addict with a criminal record (although others maintain he just dealt pot for which he did time). I have only hazy memories of it, but I do recall that he used to knock us girls around. I remember in particular the time he threw my sister up the stairs, seeing her crumple as she hit the landing. After Mom finally tossed him out, he broke into the house and assaulted her badly enough that she grabbed us and moved to a motel for the night. When a police officer friend of Mom’s showed up at the house to pick him up for parole violation, the boyfriend had vanished for good.

During all this drama, Dad tried moving back in for a while, but the marriage was irreparably shattered. Their divorce was finalized in 1974. Dad decided to move to Chicago for a better job at the home office. He arranged to travel on business to Los Angeles as often as he could, and would spend long weekends with us at the house while Mom stayed elsewhere. Like many bitter ex-spouses, she never missed the chance to run him down in front of us. She began a campaign of character assassination, telling us she never really loved Dad, trying to make him seem pathetic and weak for loving her when it was not reciprocated. He says he was trying to support us, but she told us he’d abandoned the family with no money. Mom denigrated him incessantly, trying to make him sound dangerous and untrustworthy. “He’s a liar, he’s a cheater, he’s no good,” she’d say. “He never loved you girls.” Mom always told me that dad didn’t want me, that he even had pressured her to have an abortion. She also called me a “foam baby,” indicating her birth control had failed her.

In the sadness and confusion that followed their final break up, I withdrew into myself, my imagination, and my friendship with Gabrielle, with whom I played games in which we imagined being rescued (her parents were divorced, too, and her mom was an active alcoholic). Christina expressed her anxieties in other ways. It was clear at an early age that Sister (that’s what we call each other in the South) had a special musical gift. She could hear a tune on a television cartoon, then immediately go over to the piano and pick out the melody, or imitate Woody Woodpecker uncannily, making us laugh. I also remember that when she was still very young, grown-ups starting treating her as if there were something wrong with her. She began wetting the bed when she was eight, when Mom and Dad split up. She also walked in her sleep—once, a friend identified her in her footie pajamas walking on Sunset Strip in the middle of the night—and suffered frightening asthma attacks. She was also strong-willed, truculent, and acting out with rage. They started talking about her in hushed tones, labeling her as a “troubled kid.” I’m sure they meant well, but that label incensed me because I could see her as the little girl she actually was. Those adult voices seemed, to my child’s mind, so condescending and patronizing, and their attitude certainly didn’t seem to help her any. I think it was my first personal exposure to real unfairness, and I suspect that it’s where I began to develop an extreme sensitivity to any kind of injustice and rage at my impotence to protect a vulnerable child who couldn’t protect herself.

Even though she sometimes teased me mercilessly or tickled me until I wet my pants, I loved my big sister madly. She was my protector. I remember jumping into bed with her while our house on Larrabee Street rattled during a big earthquake. When I was still too little to be in school all day, I would play in my sister’s room to feel closer to her. I was so eager to learn to read and write and count, and I would sit at her tiny table pretending to study, doing what I imagined she was doing in big-girl school. I remember trying to write, making little peaks and valleys in a straight line, and calling Mom in. “Yes, they do look like m’s and n’s,” she said, and when she left, I floated through the rest of my self-administered studies, so proud that I was fit to be tied.

I so wanted to fit in with the grown-ups that it was frustrating when I couldn’t keep up. I hated to be left out of a conversation. I remember sitting at the supper table when I was about four, listening to the adults discuss the spiritual nature of God. With inspired timing, I picked up my sparerib and declared, “God is a sparerib!” Spirit, sparerib—it all sounded the same. My mother and her friends started laughing—for them it was one of those cute
Kids Say the Darndest Things
moments. But I took it badly. I felt ridiculed and humiliated. It felt as if every time I mixed up a word my mother would laugh and tell everybody, and I never thought it was funny. It was shaming and it hurt, especially because they didn’t seem to realize how sensitive I was, and they only laughed harder when they saw my embarrassment.

Another time I was sitting up on the kitchen counter when my favorite song came on the radio, “You’re So Vain.” The lyrics were so weird and wonderful that they captured my imagination: clouds in my coffee? I loved it. I was very expressive, and it didn’t take much encouragement from my sister and mother to really get me going, belting it out with abandon at the top of my lungs, crazily off-key, while they egged me on. But eventually I realized that I wasn’t being celebrated for my animated performance, with my chubby cheeks and elastic face: I was being laughed at. It was confusing, and it broke my spirit. I never sang again. It was several years before my mother and sister began to sing together, but it was clear from the outset that I was not going to be included.

Not long after he moved back to Chicago in 1974, Dad decided he’d had enough of his nine-to-five job in the aerospace industry. He’d been working to support a family since he was nineteen, and now he did what a lot of people his age had already done: He dropped out. He packed a couple of pairs of jeans and a raincoat, and with $2,000 in his pocket and $8,000 in the bank, he took off in his MGB to find himself. He wandered around the country for a few months, eventually moving back to Lexington, Kentucky, where he learned a new skill as a leather craftsman. When he wasn’t sleeping in the back room of the leather shop where he worked, he stayed at an old fishing camp he had rented right on the Kentucky River called “Camp Wig.”

Meanwhile, whatever dreams Mom had of making it big in Hollywood weren’t working out. Right before I was ready to enter the first grade, she decided to give up on Los Angeles and head back to Kentucky to study for a nursing degree. She felt a calling to become a nurse, possibly because she had been helpless to ease her brother Brian’s suffering. She looked around for the right school and decided on the RN program in Eastern Kentucky University in Richmond.

This was the beginning of our vagabond years. Mom was a restless gypsy at heart, never satisfied to stay in one place, full of dreams of bigger things. I would attend thirteen schools between the ages of five and eighteen, as I was bounced around from town to town, household to household, from Los Angeles to Kentucky to Northern California and back again, while Mom roamed, developing her lofty dreams. Along the way, I was taught to believe that our lifestyle was normal and never to question it or complain, even when I was left alone for hours, sometimes days at a time, or when I was passed without warning to yet another relative. During these years I largely looked after myself—for example, learning to cook my own meals for myself when I was eight. Of course, I loved my mother, but at the same time I dreaded the mayhem and uncertainty that followed her everywhere. The consistent nurturing seemed to end when I was still very young, and I never knew what to expect next, whether I’d be tucked in by her, left alone to do the task myself, or left with a complete stranger. I often felt like an outsider observing my mom’s life as she followed her own dreams. Sometimes I was allowed momentarily into her inner sanctum—the bedroom while she studied or where I was occasionally permitted to sit beside her as she applied her makeup. I spent a lot of time waiting and watching, hoping for my turn with her. It rarely came.

THE SAFEST PLACE IN THE WORLD 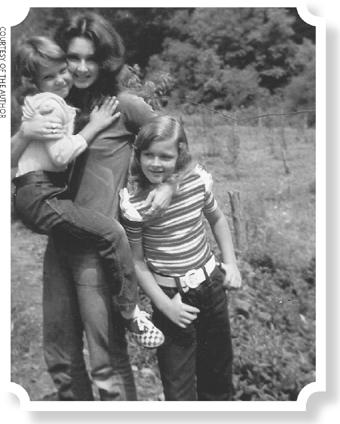 You can judge the moral stature of a nation by the way it treats its animals.