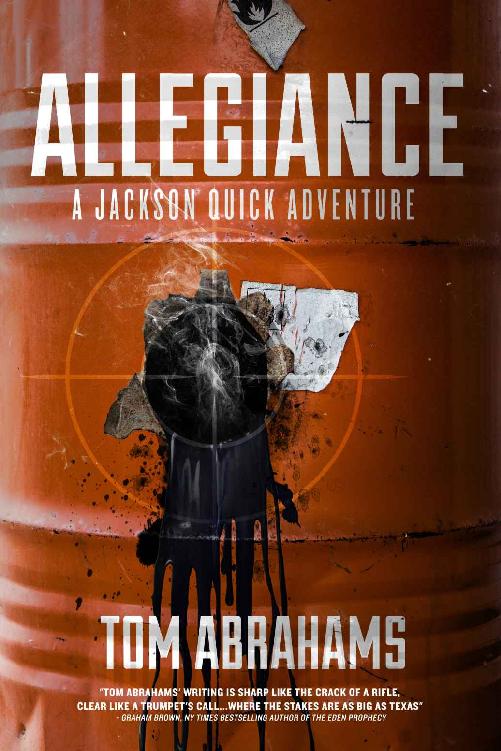 No part of this book may be reproduced, stored in a retrieval system, or transmitted by any means without the written permission of the author and publisher.

For Courtney and our nanobots; Samantha and Luke

“It’s always a battle between anarchy and tyranny – always has been.”

The job was always simple: target, breathe, pull, and kill.

No emotion. No second thoughts.

This target, this place, this job, though, were different.

The mark was not some nameless insurgent or foreign ally turned enemy. He was one of the wealthiest men in the world.

The location wasn’t a frozen mountain perch on the Afghani-Pakistani border or the humid, tangled jungles of Central America. This was on U.S. soil.

There was no payment on the other end of the bullet. This was a favor; a freebie the sniper didn’t typically grant.

All of it was irregular, the sniper thought, lying belly down on the roof of the George R. Brown Convention Center in downtown Houston, Texas. The crowd on the grassy area below was small. The sky was clear. The wind was slight and from the south.

It was the loud rush of traffic on highway 59 from behind that was distracting. The sniper slipped in a pair of earbuds and pressed play on a small black iPod. The electric guitar licked into rhythm, followed by the beat of the drum.

AC/DC always helped clear the sniper’s mind and focus on the task ahead.

The sniper thumbed the volume up a click and took a deep breath. Eyes closed, the sniper didn’t see the figure to the left approaching with purpose.

A large man, his muscular frame was hidden by the gray Ghillie suit used to disguise his presence on the convention center’s roof. His dark, polarized sunglasses hid his eyes and his muscles flexed as he crouched low, moving to the shooter.

The sniper spun as the man approached.

“Where have you been?” whispered the shooter, pulling out the earbuds.

“Checking the escape route.” The man was the sniper’s spotter. He was the senior, more experienced member of the team. "You want coffee?" He nodded at a large stainless canister to the sniper's left.

“Thanks.” The sniper reached for the caffeine.

“You set?” The spotter inched onto his belly next to the sniper. “Crowd’s beginning to fill in.”

“A bit.” The sniper took a sip of the coffee without making a sound.

“That road noise sucks,” the spotter said, glancing back toward the highway behind and below them.

“That’s why I’m amping up with music. Helps me focus.”

“This I know,” the spotter smiled. The pair had been through a lot in their time together; Parachinar, Al Fashir, Benque Ceiba, Tampico. They were always in and out. They always hit their mark. They knew each other as well as they knew themselves. Hours, or days, in a snow drift or mud hole had accelerated their personal learning curves.

“
Shoot
To
Thrill
? AC/DC?” The spotter knew he was right.

“You know it.” The sniper felt the wind shift.

“Trite.” The spotter adjusted his elbows.

Another silent sip from the cup.

“Okay,” the spotter rolled his eyes and reached into a small gray sack and pulled out a scope. “Time to get serious. I see the car approaching.”

“Roger that.” The sniper set the coffee to the side and scanned the crowd, which now numbered at least two hundred people.

High above the target, the sniper team quietly pressed forward with their pre-shot routine, despite using a new weapon given to them for this assignment.

The M110 rifle was longer and heavier than the sniper's weapon of choice, the thirty-six inch, nine pound CSASS. Still, it would do. There was, after all, no such thing as a single best sniper rifle. Any rifle in the hand of a sniper was equally effective.

The spotter put his eye to his adjustable power scope. He zoomed in to 45x and spun it back to 20x, giving him a wide field of view and the ability to trace the bullet once fired. As he scanned left, he saw the target getting out of a vehicle.

“Target spotted,” he whispered above the swoosh of the traffic. “Dark suit, near intersection three. Waving hands. Smiling.”

“Roger,” answered the shooter. “Got him.” The sniper moved the rifle from right to left, following the target. “Now approaching intersection one.”

The target shook hands with a handful of men and women lining the path to the hurriedly assembled stage. He looked at the skyline to his right and extended his arms as if to embrace the city. He turned to the crowd, clapped his hands, and bounded up the steps to the lectern. Every move was choreographed.

The spotter checked his range finder. He lifted up his head and looked, without aid, at the scene below them. “That intersection is 350 meters. I laze him at 351 meters. Come up to six plus four.”

“Roger that,” the sniper adjusted again. “Elevation six plus four.”

“We have right to left wind now. Come right 1.3 M.O.A,” the spotter looked at the flags blowing to either side of the target. The gusts were slight, but they’d switched from south to north.

The crowd below them was cheering. They were waving signs. The target was relatively still. He was in a single spot. Not working the crowd as he normally did.

Through their scopes, the team saw the target remove his dark suit jacket and tug at his tie. He was wearing a white shirt, making the mark increasingly visible against the reflective glass and steel of the downtown buildings behind him.

The spotter and sniper exchanged knowing looks. The two were telepathic, almost. They were ready.

“Spotter up.” The spotter shifted on his elbows. He’d done this countless times before. With each one, the moment before the shot, he felt the adrenaline course through his body. He was anxious, ready to pull the trigger himself and see the extraordinary result of his godforsaken skill. He was the eyes, not the muscle. He looked to his right at his partner’s hand on the trigger and returned to the scope.

The target had his finger to his lips, quieting the chanting crowd.

The shooter exhaled and settled in for the pull. Everything around the target blurred. Concentration was critical. One last breath before the shot.

“Send it.” The data was good. The target was there.

At that moment, the sniper pulled the trigger which, in turn, engaged the sear. Instantly the sear released the firing pin, which struck the back of the bullet primer. A small, internal explosion propelled the 7.62 x 51 millimeter bullet down the barrel and into the air toward the mark.

Traveling at 2,600 feet per second, the bullet tore through the flesh, muscle, and bone of the target before the sniper released the pressure on the trigger.

“Roger that,” the spotter confirmed with the scope. “Target hit.”

The sniper chambered another round as the spotter scanned the field one last time. Both were motionless until the spotter, out of habit, picked up the brass casing to his right and dropped it into his bag. It was still hot.

By the time the target's blood began pooling around him on the stage, the sniper and the spotter were off of the roof. Within minutes they’d easily merged into the whirring traffic on highway 59.

The M110 was in a dumpster on the rear loading dock of the convention center. It was wiped clean and dropped onto a stack of corrugated cardboard, the team making no effort to hide it.

PART I: COME AND TAKE IT

“Texas is the obsession, the proper study, and the passionate possession of all Texans.”

The last I remember, I was at a bar on Sixth Street.

It smelled like a Thursday; a mix of cloves, hairspray, spilled beer, and sweat. Thursdays are big in Austin, a jump on the weekends that lie ahead.

My girlfriend, Charlie, left me sitting in a small red vinyl booth while she went to the bathroom. Charlie always likes hitting the clubs on Thursdays. She says it makes getting through the week easier when she knows she has an extra night of dancing and drinking.

She’s as tall as I am; maybe 5’11”, with red hair and bright green eyes, like Nicole Kidman after she got famous, but before she denied having plastic surgery.

Nowhere Nice (Nick Reid Novels) by Rick Gavin
The Collectors by Gowan, Lesley
The Surrendered Wife by Laura Doyle
Goebbels: A Biography by Peter Longerich
The Distinguished Guest by Sue Miller
In Bed with the Bachelor (Bachelor Auction Book 5) by Megan Crane
Frostbite: Vampire Academy by Richelle Mead
Extreme Elvin by Chris Lynch
Camille by Pierre Lemaitre
Behind the Marquess's Mask (The Lords of Whitehall Book 1) by Kristen McLean
Our partner