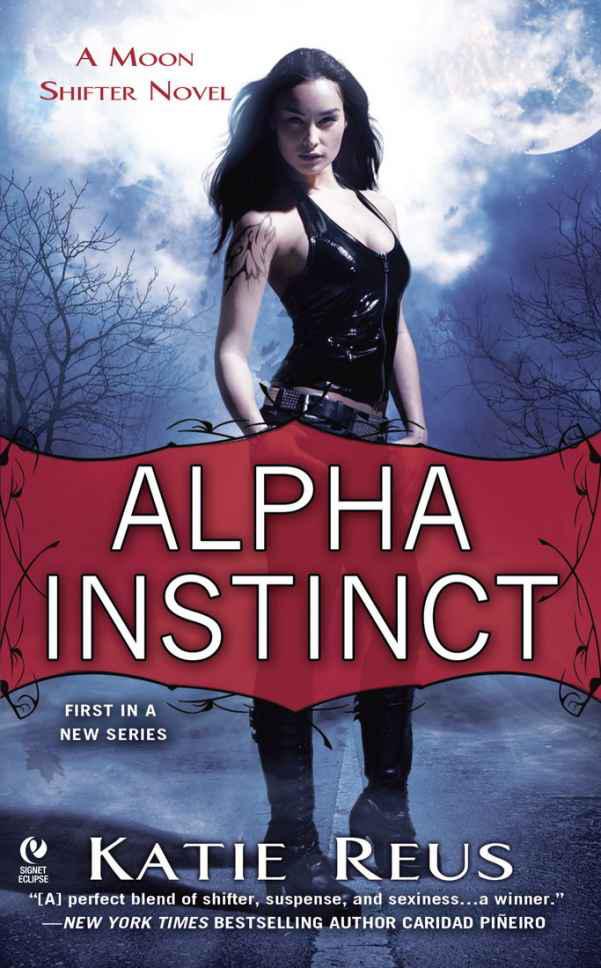 “Reus has an instinct for what wows in this perfect blend of shifter, suspense, and sexiness. Sexy alphas, kick-ass heroines, and twisted villains will keep you turning the pages in this new shifter series.
Alpha Instinct
is a winner.”

“
Alpha Instinct
is a wild, hot ride for readers. The story grabs you and doesn’t let go.” 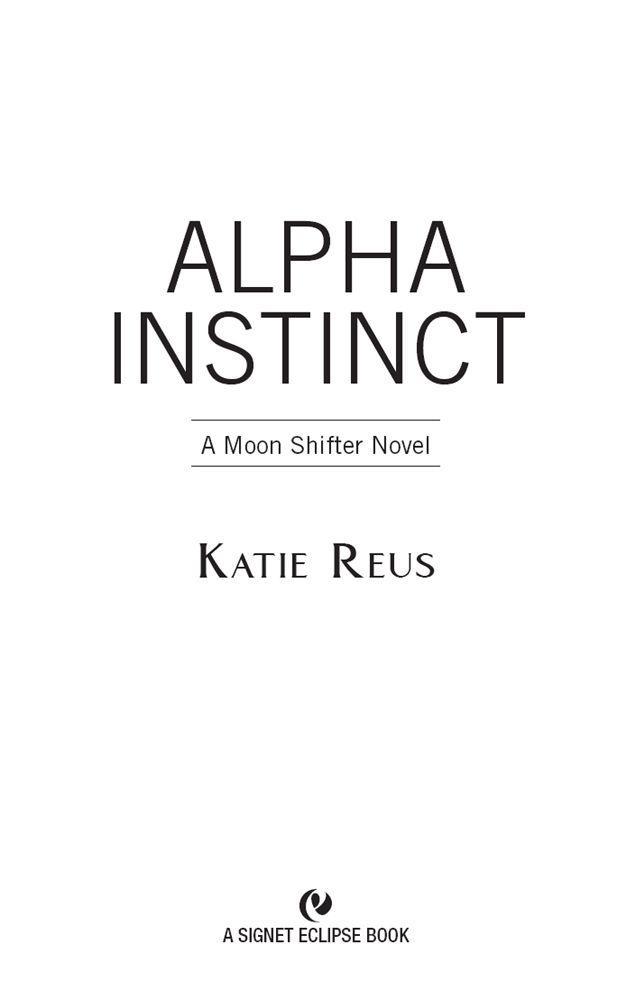 PUBLISHER’S NOTE
This is a work of fiction. Names, characters, places, and incidents either are the product of the author’s imagination or are used fictitiously, and any resemblance to actual persons, living or dead, business establishments, events, or locales is entirely coincidental.
The publisher does not have any control over and does not assume any responsibility for author or third-party Web sites or their content.

For my husband, my one true north, my rock. Your unswerving support and wonderful ability to look the other way when things around the house pile up or when we have takeout
again
does not go unnoticed. Thank you for always encouraging me to aim high and for having more faith in me than I do in myself.

A
nalena Cordona shoved her hands into the pockets of her thick, quilted down jacket. Not because she was cold, but because for the second time in the past ten minutes she was questioning her decision to meet Sean Taggart without an escort. It was likely stupid—scratch that; definitely stupid—but she couldn’t drag one of her sisters or cousins along to meet with him. Taggart was one of the most devious shifters she’d ever met, and she couldn’t risk her pack getting hurt. Despite her effort to appear casual, an unwanted shiver skittered down her spine. If need be, she was ready to run at a moment’s notice.

The wind howled mercilessly through the trees of Fontana Mountain and when it shifted south she caught Taggart’s distinctive, foul scent. He was close. Watching her, no doubt.
Pervy bastard.

“I know you’re there, Sean. Come out now so we can get this over with.” She was thankful her voice didn’t shake.

To her surprise, a hulking brown and white wolf emerged from a cluster of trees.
What the hell?
They’d agreed to come in
human
form. Glancing around, she saw he hadn’t brought anyone else. That tamed her nerves a little but not much. He was still older and stronger and a lot more ruthless. Even though she tried to mask it, he had to smell her fear. “What are you doing?” she snapped, hoping her anger would cover her alarm.

When the animal stood a few feet in front of her, he changed to his human form. Ana looked away but could hear his bones break, shift and realign. Many shifters didn’t mind others watching them change, but to her it was such a private, painful thing, she didn’t do it in front of just anyone.

She turned back to face him and immediately wanted to wipe the smirk off his face. Of course he’d be arrogant enough to stand naked in front of her when they were supposed to be having a serious meeting. She attempted to keep the loathing out of her voice. “I thought we agreed to come in human form.”

He shrugged and had the nerve to grab himself. “I wanted the exercise. Besides, you should get to see what’s going to be yours soon.”

Mine?
Gross.
Bile rose in her throat, but she pushed it down. Sure, the man had a nice body, but what lay underneath that exterior scared her. She’d seen the way he treated the women of his pack. He was mean just for the sake of being mean. As Alpha, he should set a better example, but no one had stood up to him yet. “Excuse me?”

“That’s why you wanted to meet, isn’t it? To proposition me?”

“Not exactly.” She cleared her throat and looked around. A light layer of snow had fallen over the normally grassy incline. Other than the wind and rustling trees, she was suddenly aware of how alone she really was. She was at least two miles from her family’s ranch. “We’ve had a few attacks over the past couple weeks. Some of our cattle have gone missing and I’ve found a few mutilated cows. And just this morning I found one of my sister’s horses dead.”

The increasing vandalism against her pack’s ranch was a message. Taggart wanted to unite his pack with hers and would stop at nothing to get what he wanted. She was surprised he hadn’t done worse.

“And you think my pack had something to do with it?” His voice was monotone.

She noticed he didn’t deny it. “I didn’t say that. I don’t know many humans who venture into our territory, so I just wanted to let you know about it.”

He crossed his arms over his bare chest and she forced herself to keep her eyes on his face. It pissed her off that he just stood there naked. He must have known it would make her uncomfortable.

“Fine. I’ll keep an eye out, but
we
haven’t had any problems. If you had better security, I doubt you would either.” His voice was taunting.

“We’re doing fine.” But they weren’t. Not really. Financially they were on solid ground, but with all the males of their pack dead, it was only a matter of time before another pack would think they could move into their territory and force them to assimilate. They might live peacefully among the humans now, but they still had their own laws to worry about. Their black-and-white laws were a lot more primal. As unguarded, unprotected females, they were more or less fair game. It might be bullshit, but there wasn’t much she could do about it unless she wanted to take on the Northern American Council. They wouldn’t allow a she-wolf to remain Alpha without proving herself. As with males, a true Alpha—regardless of gender—had to prove she was strong enough to protect her pack from anything. If it came down to an actual fight, she couldn’t take on Taggart and she knew it. No doubt he did too. And she hated that. Pack law was so different from human rules, and while her animal side acknowledged and understood it, her human side fought against the archaic rules of the Council. Sometimes she worried the eight council members headquartered in Chicago were too out of touch with the changing needs of their kind.

He took a step forward and traced a finger down her cheekbone. Alarm fluttered through her. On instinct, she slapped his hand away. “Don’t touch me.”

Chasing the Tumbleweed by Casey Dawes
Cutting Horse by Bonnie Bryant
The Secret of Fatima by Tanous, Peter J;
Rodomonte's Revenge by Gary Paulsen
Pathline by Kaede Lazares
Arctic Bound by Tigris Eden
The Girl with the Creel by Doris Davidson
The Rise & Fall of ECW by Thom Loverro, Paul Heyman, Tazz, Tommy Dreamer
Clawback by J.A. Jance
A Hero's Reward by Morrel, Amy
Our partner