Read Always A Bridesmaid (Left At the Altar) Online

Always A Bridesmaid (Left At the Altar) 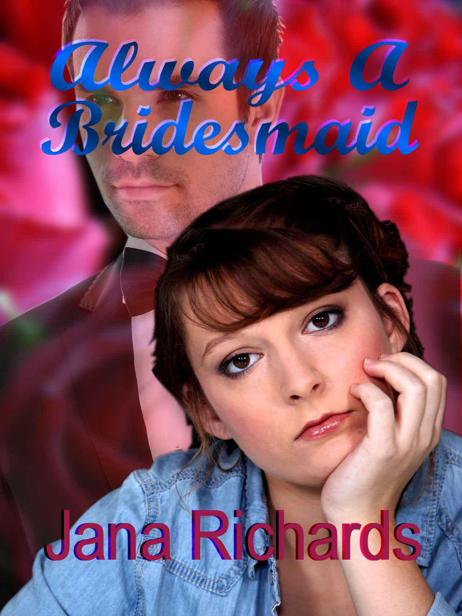 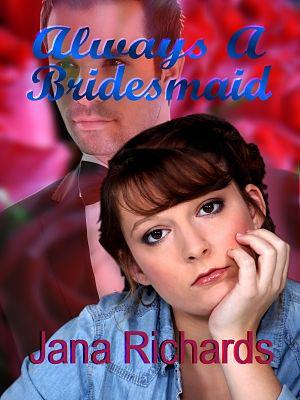 This is a work of fiction. Names, characters, places and events described herein are products of the author's imagination or are used fictitiously and are not to be construed as real. Any resemblance to actual events, locations, organizations, or persons, living or dead, is entirely coincidental.

All rights reserved. Except for use in review, the reproduction or utilization of this work in whole or in part in any form by any electronic, mechanical or other means now known or hereafter invented, is forbidden without the written permission of the publisher.

Warning: The unauthorized reproduction or distribution of this copyrighted work is illegal. Criminal copyright infringement, including infringement without monetary gain, is investigated by the FBI and is punishable by up to five (5) years in federal prison and a fine of $250,000.

Published by Uncial Press,
an imprint of GCT, Inc.

Dedicated to my writing group, Lover's Knot, for their endless patience in listening to and critiquing various versions of "Always a Bridesmaid" many, many times. Thank you!
Chapter One

This was it. Definitely. She'd never be a bridesmaid again. She really meant it this time.

Daniella DiPietro pasted a smile on her face as she walked slowly down the aisle to the strains of "Here Comes the Bride." The three inch heels the bride insisted she wear pinched her toes, and the bridesmaid dress, though stylish, was an uncomfortable size too small. When Chantal Campbell's first bridesmaid suddenly backed out and Dani reluctantly accepted the job, she was stuck with the ill-fitting dress, since there was no time to order one that fit properly. A seamstress did her best with alterations, and a sturdy pair of Spanx helped contain her curvy figure within the slim, strapless column of bright pink satin, but the sweetheart neckline exposed much more of her ample cleavage than she felt happy showing. She felt like an exhibitionist, with her breasts practically spilling out of the dress. One false move and she'd flash the congregation.

Dani clamped down on her embarrassment. The things she did in the name of friendship.

Friendship?
Though they'd been friends in university, she hadn't spoken to the bride in years. But she'd remained friends with Fiona, Chantal's sister, and when she begged her to help, Dani simply couldn't say no. What a soft touch she was.

She watched Zach Morrison, the groom, as he waited at the front of the church for his bride, his eyes focused on the door through which she was about to enter. Lordy, he was even more gorgeous now then the last time she'd seen him, some eight years ago. His thick, dark hair was a little too long to be considered proper business length, but not so long as to fall into Eighties rock star territory. The dark strands curled around his ears and the nape of his neck, and one lock fell rakishly across his forehead. A long list of attributes completed the picture: prominent cheek bones, a strong jaw and an elegantly shaped mouth, not to mention broad shoulders, slim hips and blue eyes to die for. But even more important, Zach was a nice guy. Maybe too nice for Chantal.

This wasn't their first trip to the rodeo. Eight years ago, they'd been engaged until Chantal had called it off, and then unexpectedly married someone else.

But here they were, eight years and two divorces later--both Chantal's--and about to marry. Perhaps it was meant to be. For Zach's sake, Dani hoped Chantal treated him right this time.

Finally she reached the front of the church and took her place. A moment later, Fiona joined her. Tall, slim Fee looked like a runway model in the bridesmaid gown instead of an overstuffed pink sausage like her. Despite starving herself the last couple of weeks, the dress was still too tight. As if reading her thoughts, her stomach rumbled ominously. She was hungry enough to gnaw off her own arm.

Finally the bride made her entrance through the church doors on her father's arm, looking radiant and gorgeous. As usual, Chantal was the most beautiful woman in the room. Her elegant strapless gown was a white silk confection that fit her perfect size two figure flawlessly. Her glorious blonde curls had been artfully arranged in a chic updo that showed off her long, graceful neck and creamy shoulders.

Dani swallowed her rising envy. She felt as though she'd been tossed in a time machine and sent back eight years to the days when she'd played ugly duckling to Chantal's beautiful swan.

She didn't enjoy feeling envious any more than she enjoyed feeling like an ugly duckling, not when she'd worked so hard to get past both emotions.

Chantal reached the altar and took Zach's hand. The minister began the marriage liturgy, the usual stuff about love being patient and kind, bearing all things, and so on and so on. Dani stopped listening, too uncomfortable to concentrate. Besides, she'd heard the spiel more times than she cared to remember. She occupied herself by calculating the number of hours until she could peel off the gown and throw on a pair of comfy sweatpants.

Suddenly the doors of the church crashed open. A man shouted, "You can't marry him, Chantal! I love you and I know you love me!"

Dani turned to stare, along with everyone else in the congregation. The man in the doorway wore a rumpled grey suit, with his red-and-blue striped tie hanging askew. His blonde hair stood on end and his hands were fisted at his sides.

"Who the hell is that, Chantal?" Zach's question was urgent. "What's he talking about?"

Chantal's face turned whiter than her dress. "He's my first husband," she said in an undertone. Turning to the blonde-haired man, she yelled, "How dare you disrupt my wedding, Harry! Go home."

Harry strode down the aisle toward Chantal. "No! I can't let you make the biggest mistake of your life by marrying this guy. You know it would be wrong."

Zach moved to stand between Chantal and the intruder. "What's he talking about, Chantal?"

Harry stopped and raised his hands. "I don't have any quarrel with you, Zach. She's never going to make you happy. She still loves me. She told me so last night."

Dani heard everyone in the congregation gasp in unison. Was Chantal in love with this guy? If she was, why were they all here, supposedly celebrating her union with Zach? The thought must have also occurred to him. She had a front row seat to the disbelief clouding his eyes.

"Is this true? Are you in love with him?" he said.

"Tell him the truth, Chantal. Tell him you were in my bed just two nights ago. Tell him!"

She bit her lip. "I swear, it didn't mean anything. Last minute nerves got the best of me."

For a moment Zach said nothing. His face betrayed no emotion. But Dani saw his throat work, as if he were holding back a torrent of feelings.

"So what he's saying is true? You've been sleeping with him since we got back together?"

Chantal lifted her chin and raised tear-filled eyes to his. "It was only the one time, I swear! I didn't mean for it to happen."

For several long seconds he stared into her eyes as if trying to delve into her innermost thoughts. Finally he straightened his shoulders and gave her an almost imperceptible nod. "If you want him, then go. I'm done." Without another word he marched to a side door.

He opened the door and left the sanctuary. The click of the latch echoed in the quiet church.

Shocked silence greeted his departure. Dani stood motionless, too stunned to even breathe. Mike, one of Zach's groomsmen, quickly left through the same side door. Dani hoped he found Zach and made sure he was okay. Her heart ached at the thought of the devastation he must be experiencing.

Chantal remained at the front of the church, still staring toward the side door. Harry approached her and touched her hand.

"Come with me, darling. Let's get out of here."

She recoiled from his touch. "Don't you dare touch me! This is all your fault!"

She began to cry, tears running down her cheeks and ruining her makeup. Dani put her arm around her shoulders. Though she hated what she'd done to Zach, Chantal was genuinely hurting, and Dani couldn't bear to kick a girl when she was down.

"It's time for you to go," Foster Campbell said as he pulled Harry away from his daughter. "You've caused enough trouble for one day."

"Chantal, I love you! We can make it work this time, I know we can. Call me!" Harry cried before they tossed him out the door.

Fiona leaned close to her sister. "Is it true? Did you really sleep with Harry just two days ago?"

Chantal raised her chin defiantly. "I made a mistake, okay? Everybody makes mistakes."

"A mistake? A mistake is when you put too much sugar in your coffee, not when you cheat on your fiancé! That's something else entirely."

"And of course you're so perfect, you've never done anything wrong."

"At least I've never humiliated my family in front of everyone they know." Fiona snapped.

People in the congregation watched with keen interest, some of them pulling out cell phones to take pictures. In minutes, this fiasco would be all over the Internet. Dani could imagine the title of the YouTube video:
Two-timing Bride dumped at the altar
.

She stepped between Fiona and Chantal and whispered, "Let's save this argument for somewhere a little less public."

Todd returned and escorted Chantal and Fiona to one of the waiting limos. Chantal kept her chin up, her expression haughty, as if daring anyone to remark on her behavior.

Dani gave her high marks for having plenty of nerve.

Chantal's parents followed closely behind them. Foster practically carried his sobbing wife down the aisle.

Shaking off her uncharitable thoughts, Dani gritted her teeth and headed back up the aisle. As the only member of the wedding party left, it fell to her to usher the guests from the church, since the minister didn't seem capable of doing it. She held up her hand to get everyone's attention.

She raised her voice. "Excuse me please. As you've probably already guessed, there will be no wedding today. The family requests that you all please leave the church quietly and quickly. Thank you for your cooperation and patience."

Fortunately, Mike returned and he helped her shepherd the guests from the church.

Once people began leaving, she took him aside. "How's Zach? Is he okay?"

He shook his head. "I don't know. I couldn't find him. He must have hailed a cab and gone back to his apartment."

Her heart went out to Zach. He had to be traumatized by this turn of events. A wave of anger swept over her. How could Chantal do this to him? "You'll check on him, make sure he's okay?"

Ancestor's World by T. Jackson King, A. C. Crispin
The zenith angle by Bruce Sterling
Bold Beautiful Love -- A Temptation Court Contemporary Romance: Temptation Court: Passion in New York by Payne,Angel
War Weapons by Craig Sargent
Homeward Bound (Journeyman Book 1) by Golden Czermak
The After Party by Anton Disclafani
White Knight by Kelly Meade
Sphinx by Robin Cook
Conan the Barbarian: The Stories That Inspired the Movie by Howard, Robert E.
The Unbearable Lightness of Being in Aberystwyth by Malcolm Pryce
Our partner