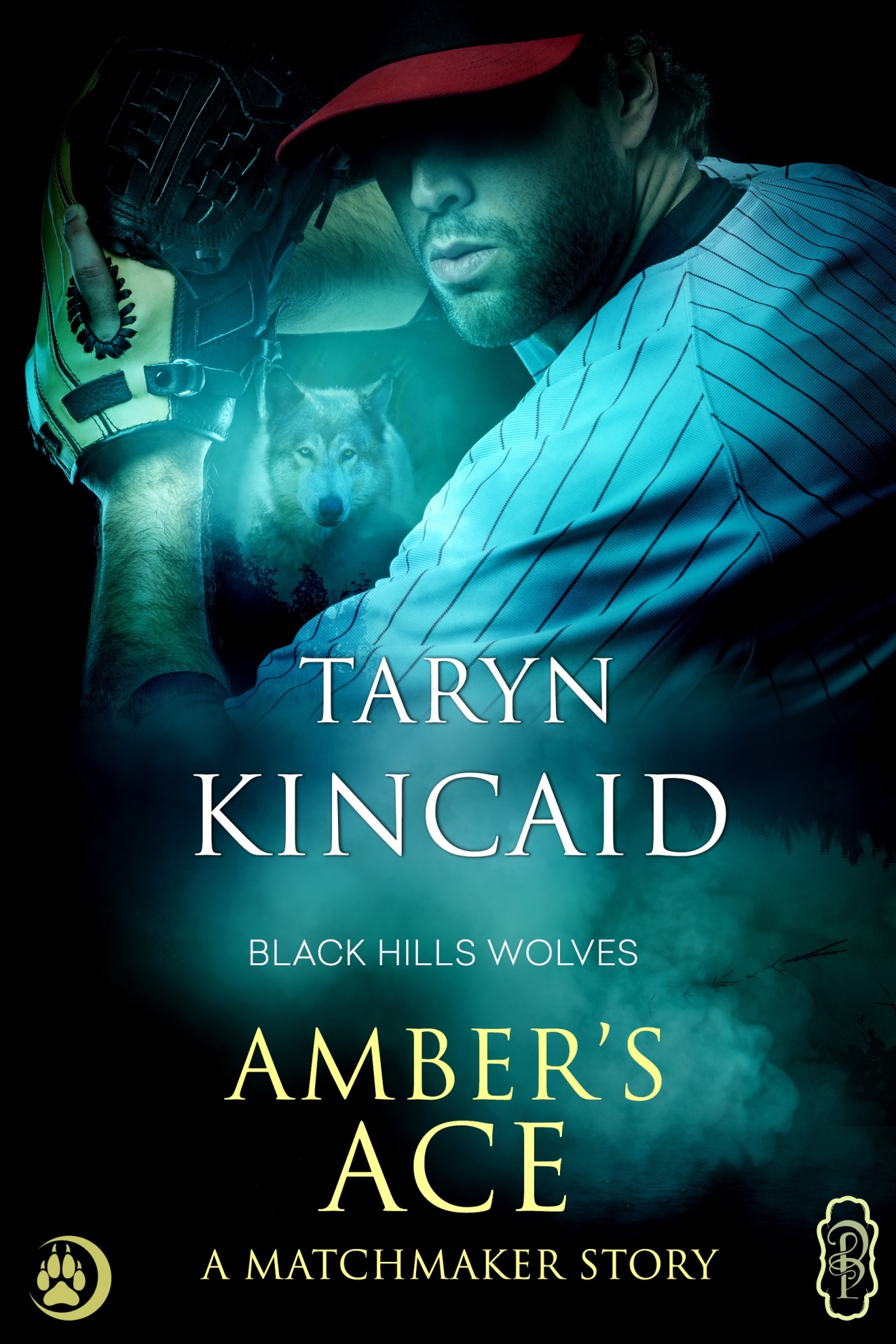 Another Chance
by Taryn Kincaid

And be sure and let me know if you think Amber’s twin sister, Garnet, needs a story of her own. You can find me on
facebook and twitter and email me at
[email protected]
. I love hearing from readers!

What a Wolf Wants

Portrait of a Lone Wolf

Wolf on a Leash

The Wolf and the Butterfly

A Cougar Among Wolves

A Cougar Among Wolves

Scent of the Hunt

Scent of His Woman

Secrets of the Hunt

In From the Cold

Riley Morgan, the all-star ace pitcher of the world champion New York Kings, has long hidden his secret from his adoring fans and the clamoring metropolitan press. But when a long-distance mate call distracts Riley on the mound, he suffers a freak, career-ending injury that sends him back to his South Dakota wolf pack to heal.

Stolen from her family along with her twin sister years earlier, Amber Northridge has been held prisoner and abused by the crazed former alpha and his henchmen since she was a teen, managing to survive through her resourcefulness and wit. Now, at long last, the pack has located them and set them free.

Home in Los Lobos, Amber recognizes the hunky baseball player she’s seen on TV as her mate, but she doubts she can be with any man after all she has suffered.

The word echoed like thunder in Riley’s head. Shocked and shaken, he slipped off the rubber on the pitcher’s mound, releasing the full-count ball before he had a good grip on the seams. Like a slo-mo replay, the baseball wobbled toward the batter’s box. The crowd sucked in its collective breath. The horsehide sphere flew high and wide, soaring over the catcher’s head.

“Ball four!” The umpire’s left arm shot out to signal the walk. Riley’s teammate ripped off his catcher’s mask and scrambled to recapture the errant pitch bouncing off the backstop.

Shit and shineola. His perfect game, down the crapper. He hadn’t thrown a wild pitch in his last five outings and now he’d dealt three balls in a row, capped by the last frickin’ doozy. If he couldn’t concentrate better than this, he could kiss the New York Kings’ play-off hopes good-bye.

The batter at the plate shrugged and trotted down the base path to plant himself on first. The crowd groaned, commiserating with Riley and disappointed at missing the chance to witness history in the making. The guy on first smirked at him and made a big show out of exchanging his batter’s helmet for his Philly Phantoms cap.

The afternoon sun beat down on Riley, the dog-day, end-of-August temperature rising steadily from balmy to way past uncomfortable. Sweat trickled beneath the brim of his cap and dripped from his brow to the bridge of his nose. He took a swipe at the droplet, adjusted his cap, and glared into the television camera broadcasting his every move. What the fuck was wrong with him?

Only four fricking outs away…then this. Beyond sloppy.

He’d carried the perfect game into the bottom of the eighth inning, his stuff so strong and potent, even the other team’s superstar sluggers couldn’t touch him. His fastball had smoked over the plate at ninety-six miles an hour. He’d painted the corners of the plate like an artist with his slider and had great movement on his breaking ball, his location precise. His curveball sailed down and away from the batters at the last split second, barely catching the outer edge of home plate. He’d seemed unbeatable. In the dugout, his superstitious teammates had moved away from him on the bench, not talking to him or mentioning the perfect game he had going. No one wanted to jinx the miracle in the making.

And then he’d let this meathead on?

Maybe he’d been a tad too pumped. As the scoreboard ticked off each inning, more and more adrenaline had flooded through Riley. Making him too jazzed. Too strong. Too wild.

That was the reason for the errant pitch. Had to be. Jittery excitement coursed through his veins, making him ready to jump at shadows and causing him to throw a little crazy. He had to regain control before he blew it.

How could he hear anything over the roar of the crowd?

Mine.
Sheesh
.
He couldn’t have really heard that.

A mate call? With fifty thousand fans in the stands, stomping, whistling, and cheering his name for all they were worth? No frickin’ way. They took up their chant with renewed vigor, trying to help him brush off the ruination of his perfect game.

He tried to shake off the error. The catcher came out to talk to him. Then the manager. A few ass and shoulder pats later, he stood alone on the mound again.

He smoked one over the plate at ninety-six mph with satisfaction. Nothing was wrong. Even if he’d blown the perfect game, he still had a no-hitter going and, of course, a shutout if he could force the weird auditory hallucination out of his head and concentrate. All was not lost. The Kings were leading 3-0. He could still pick the runner off first or get this guy to strike out or hit into a ground ball double play.

But jeez. A mate call? Really? In the heart of freakin’ New York City? After all these years? Yeah, the Big Apple was a celebrated melting pot and all, but how many wolves wandered around the teeming metropolis, anyway?

Certain he’d heard
something
, Riley narrowed his eyes and looked toward the stadium crowd behind the dugout, searching out his most recent starlet girlfriend in the team’s family box. No way
she
was a wolf. Maybe he didn’t know much about pack or being a wolf, but he’d definitely have sensed her eligibility as a soul mate. He would have lolled in her scent when they tangled sheets together, absorbing it into his skin and wrapping the warm sense of homecoming and well-being around himself like a baby with his blankie. That’s what it was supposed to be like, right? He didn’t get the whiff of mate off her. Not even remotely. The expensive perfume for which she made commercials, yes. A strong, pungent scent that played havoc with his sensitive wolf’s nose, giving him pounding Excedrin headaches and making him dizzy and half-blind, a reaction so adverse he’d feigned an allergic reaction until she’d mercifully stopped wearing the stuff. But the kind of mate scent rumored to brand a wolf’s soul, to seep into every fiber and cell, to tear into his head and forever scramble his brains? No. He and Taffy had some good times together, but that was it. So, where had the gut-shattering word come from? Despite what he told himself, he remained certain he’d really heard it: A mate’s sweet, sure voice crashing into the depths of his being, shaking him to his soul.

He was thirty-one years old and squeaky clean as ballplayers went, especially those who played in New York with all the decadent delights, temptations to sin, and notoriety the city had to offer. He’d been with the Kings his whole career, a rustic rube straight out of South Dakota, from the Kings’ farm clubs right to being called up to the bigs. And here he was, at the top of his game. One of the stars of The Big Show in baseball’s premier media market.

The fans and press and admen adored him. “Upright Riley,” they called him. “Up
tight
Riley,” he guessed some of his Kings teammates probably muttered behind his back. He never even cursed out loud if anyone was around to hear him, though sometimes the pressure of keeping everything bottled up inside got to him.

More expletives exploded in his head. Sure, he’d dated his share of supermodels and movie stars, but he’d never embroiled himself or his team in scandal. No whiff of his secret ever swirled around him.

He towered above other players, powerful, swift, and strong, but he was pretty sure no one had guessed he was a wolf. The media would have been all over even the faintest rumor, and worse. His mom had whisked him away from Los Lobos as a small cub three decades ago, and he had no memory of the place. His mother had explained some things to him, but not all. Sometimes, he felt a little like a fish out of water in the majors, but ever since hitting the bigs, he’d been vigilant about what he said to the press. He’d never been splattered over “Page Six” of the
Post
or the back pages of any of the tabloids, had never tested positive for banned substances. No hint of his lupine DNA ever showed up in random drug testing. No investigations ever tarnished his name. He’d never even held out on renewing his contracts, signing as soon as they came up, appearing regularly for the pitchers and catchers phase of spring training, one of the first on the team to do so.

He was the face of the New York Kings, their poster boy and public-relations dream, awash in commercial endorsements, with his path to Cooperstown laid out in front of him, clear, straight, and within his grasp.

At this stage of his life, he wasn’t looking for anything eternal…unless it was permanent enshrinement in the Hall of Fame with no asterisks next to his name. He went out with his share of celebrated, high-maintenance women…but none of them lasted very long. A month or two and over and out. He’d sure never dated a woman he sensed would be forever. He’d never found a woman who even whispered the barest hint to him of “mate.”

A Step Away from Paradise: A Tibetan Lama's Extraordinary Journey to a Land of Immortality by Thomas Shor
Open Waters by Valerie Mores
Fading Away (Hardest Mistakes #1) by Dannielle Wicks
The Legacy of Copper Creek by R.C. Ryan
Behind Closed Doors by Elizabeth Haynes
Gore Vidal by Fred Kaplan
Steamed by Holt, Desiree, Standifer, Allie
Underworld by Greg Cox
Being George Washington by Glenn Beck
Brazzaville Beach by William Boyd
Our partner