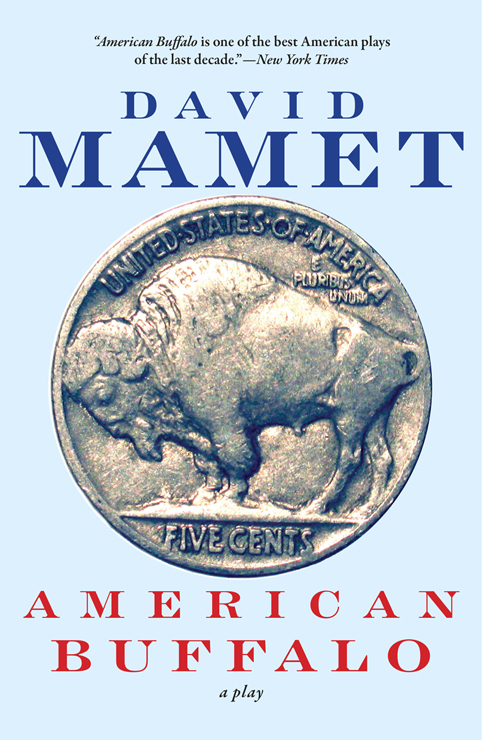 A Life in the Theatre

Sexual Perversity in Chicago
and
The Duck Variations

The Shawl
and
Prairie du Chien

The Poet and the Rent

A Waitress in Yellowstone

The Museum of Science and Industry Story

We Will Take You There

The Cherry Orchard,
by Anton Chekhov

The Three Sisters,
by Anton Chekhov

a play by David Mamet

with an introduction by Gregory Mosher

All rights reserved. No part of this book may be reproduced in any form or by any electronic or mechanical means, including information storage and retrieval systems, without permission in writing from the publisher, except by a reviewer, who may quote brief passages in a review. Scanning, uploading, and electronic distribution of this book or the facilitation of such without the permission of the publisher is prohibited. Please purchase only authorized electronic editions, and do not participate in or encourage electronic piracy of copyrighted materials. Your support of the author’s rights is appreciated. Any member of educational institutions wishing to photocopy part or all of the work for classroom use, or anthology, should send inquiries to Grove/Atlantic, Inc., 154 West 14
th
Street, New York, NY 10011 or
[email protected]
.

CAUTION: Professionals and amateurs are hereby warned that
American Buffalo
is subject to a royalty. It is fully protected under the copyright laws of the United States, Canada, United Kingdom, and all British Commonwealth countries, and all countries covered by the International Copyright Union, the Pan-American Copyright Convention, and the Universal Copyright Convention. All rights, including professional, amateur, motion picture, recitation, public reading, radio broadcasting, television, video or sound taping, all other forms of mechanical or electronic reproduction, such as information storage and retrieval systems and photocopying, and rights of translation into foreign languages, are strictly reserved.

First-class professional, stock, and amateur applications for permission to perform it, and those other rights stated above, must be made in advance to the author’s agent, William Morris Agency, 1325 Avenue of the Americas, New York, NY 10019.

This play is dedicated to Mr. J. J. Johnston of Chicago, Illinois.

American Buffalo
was first produced by the Goodman Theatre Stage Two, Chicago, Illinois, and opened on November 23, 1975, with the following cast:

This production was directed by Gregory Mosher; set by Michael Merritt; lighting by Robert Christen.

After a twelve-performance showcase at Stage Two, it reopened at Chicago’s St. Nicholas Theatre Company, with Mike Nussbaum in the role of
TEACH.

In February, 1976, it was showcased at St. Clement’s, New York, with the following cast:

This production was directed by Gregory Mosher; set by Akira Yoshimura; lighting by Gary Porto.

The New York Broadway production at the Ethel Barrymore Theatre opened on February 16, 1977, with the following cast:

This production was directed by Ulu Grosbard; set by Santo Loquasto; lighting by Jules Fisher.

In 1975, I was just out of school, working at the Goodman Theatre in Chicago as assistant to everybody and as the director of Stage 2, when a guy about my age walked in with a play under his arm. “Something for your next season.” I told him I’d read it over the weekend. “You don’t need to read it. Just do it.”

Mamet’s eyes sparkled and his upper lip twitched, but otherwise he held a straight face. There was a pause. “Tell you what,” he said. “I’ll put five grand in escrow, and if the play doesn’t win the Pulitzer, keep the money.” I mustered enough solemnity to reply that I would read the script that night, and we parted. I was fifteen pages in before he left the building.

Auditions began. We quickly signed J. J. Johnston (to whom the play would be dedicated) and W. H. Macy, but we couldn’t find someone for Teach. At a 10:20
A.M
. audition a fellow came in, covered in blood. I asked if he was all right. “I fell out of the car, okay? Let’s just do the fucking audition.” We cast him.

At the first rehearsal, where Mamet heard the play for the first time, he kept tearing whole pages out of the script and throwing them away. After the actors left, I asked why. “Cuts.” I pointed out that some good stuff was on the floor. He examined a few of the discarded pages. “That’s true. Doesn’t belong in the play though.”

The actors were relieved, I suspect, because they had more than enough dialogue to learn in just nineteen rehearsals. Halfway in, we had a walk-through. Mamet was seated just behind me, and everybody was nervous. The actors, valiant to a fault, tried to get through the play without their scripts and so, of course, kept having to ask the stage manager for help. After a while, they were hopelessly lost. We started to hear everything twice.

I think I
may
have suggested, in the heat of the moment, that they resembled amateurs. This went over particularly badly with the fellow who had fallen out of the car, and he advanced on me
with a questioning mien. My assistant whispered that he was
definitely
about to hit me. I knew there was an appropriate response, but I couldn’t think what it was at just that moment, and I turned to see if Dave had an idea. The door was closing behind him.

Opening night went splendidly. Even before the reviews, we knew that the American theater was now a little bit different. After a few weeks we moved the production to the new St. Nicholas Theatre space, with a brilliant new Teach, Mike Nussbaum, who played him like Nathan Leopold in cowboy boots. Dave and I watched from the back of the house, happy beyond all bounds and already nostalgic, because we knew this was the end of the best part.

Nineteen years later, I wandered into a film festival screening of Michael Corrente’s
Federal Hill.
In the lobby after the movie, I passed by Corrente, whom I’d never met, and threw him a quick thumbs-up.

Later that day, the director came up and said, “This won’t mean anything to Mamet, but could you tell him that
Federal Hill
never would have happened if I hadn’t seen
Buffalo
onstage when I was a kid?”

My response was to suggest that he direct the movie. Michael thought I was joshing him and went back to his wife and friends. I called Mamet to apprise him of the situation, and he was kind enough to suggest that if I thought Corrente was the guy for the job, then it was fine with him.

As Estragon says in
Waiting for Godot,
“Off we go again.”

The very first thing we did was to anchor the film with Dennis Franz, an old Chicago buddy, as Donny. Mamet suggested we get a really young guy to play the Macy part, and we found the fourteen-year-old Sean Nelson on our first day of auditions.

On the first day of rehearsals, Dustin Hoffman had already been working on Teach’s lines for weeks, and I think it would be fair to say that he was positively dazzled at their complexity. My fondest location memory is of Hoffman, poleaxed with exhaustion, checking his work at the video replay station.

Same as it ever was.

Mamet worked iambic pentameter out of the vernacular of the underclass, he made it sound like people talking, and he made it funny. The language was an immediate sensation, and over the years it’s made a lot of audiences very happy and a lot of actors very crazy. There’s more to the play than the words, of course, because there was more on Mamets mind than a linguistic parlor trick. Like some bastard offspring of Oswald Spengler and Elaine May,
American Buffalo
popped out, full grown, as the American drama’s funniest, most vicious attack on the ethos of Big Business and the price that it exacts upon the human soul.

As Dave might say, “Hey,
some
body had to do it.