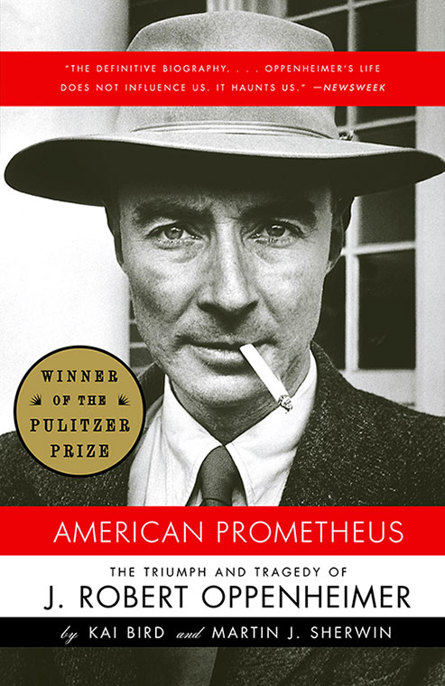 CHAPTER ONE - “He Received Every New Idea as Perfectly Beautiful ”

CHAPTER THREE - “I Am Having a Pretty Bad Time”

CHAPTER FIVE - “I Am Oppenheimer”

CHAPTER EIGHT - “In 1936 My Interests Began to Change”

CHAPTER NINE - “[Frank] Clipped It Out and Sent It In”

CHAPTER ELEVEN - “I’m Going to Marry a Friend of Yours, Steve”

CHAPTER TWELVE - “We Were Pulling the New Deal to the Left”

CHAPTER FOURTEEN - “The Chevalier A fair”

CHAPTER SIXTEEN - “Too Much Secrecy”

CHAPTER TWENTY - “Bohr Was God, and Oppie Was His Prophet”

CHAPTER TWENTY-ONE - “The Impact of the Gadget on Civilization”

CHAPTER TWENTY-FOUR - “I Feel I Have Blood on My Hands”

CHAPTER TWENTY-SIX - “Oppie Had a Rash and Is Now Immune”

CHAPTER TWENTY-EIGHT - “He Couldn’t Understand Why He Did It”

CHAPTER THIRTY - “He Never Let On What His Opinion Was”

CHAPTER THIRTY-THREE - “The Beast in the Jungle”

CHAPTER THIRTY-SIX - “A Manifestation of Hysteria”

CHAPTER FORTY - “It Should Have Been Done the Day After Trinity”

Epilogue: - “There’s Only One Robert”

“In this stunning blockbuster, two accomplished Cold War historians have come together to tell Robert Oppenheimer’s poignant and extraordinary story.” —Foreign A fairs

“A masterpiece of scholarship and riveting writing that brings vividly to life the complicated and often enigmatic Oppenheimer.” —
Chicago Tribune

“Riveting and revealing. . . . A magisterial biography that is about as close to the whole story—and to a resolution of the contradictions—as we may hope to get.” —The New Republic

“Destined to become the canonical biography.” —
The Globe and Mail
(Toronto)

“Important, exhaustively researched. . . . A major contribution to American history, [it] offers a judicious interpretation of the evidence [and] incisively portrays Oppenheimer’s personal life and character.” —
The Philadelphia Inquirer

“
American Prometheus
tells [Oppenheimer’s] story at length and exceedingly well. The authors employ a mix of thoroughness and judgment that makes this an essential book.” —Time

“Comprehensive and compelling, a meticulous survey of Oppenheimer’s life and times. . . . Bird and Sherwin’s book has an epic quality. . . . A sweeping, perhaps definitive portrait of the man and his times.” —
San Jose Mercury News

“An engaging, informative, well-written biography that will be the standard for works about Oppenheimer—and how good biographies should be written.” —Milwaukee Journal Sentinel

“
American Prometheus
is clear in its purpose, deeply felt, persuasively argued, disciplined in form, and written with a sustained literary power.” —
The New York Review of Books

“An absorbing, densely detailed biography. . . .
American Prometheus
is both an incisive portrait of a scientist and a vivid chronicle of an age.” —
Houston Chronicle

“This commanding biography, the result of twenty-five years of research, reevaluates [Oppenheimer’s] character, and delivers the most complex portrait of Oppenheimer to date.” —The New Yorker

“Exceptional and exhaustively researched. . . . Not only do Kai Bird and Martin Sherwin explain Oppenheimer’s dazzling, emblematic and vexatious career, but they also illuminate the strains in American culture that formed today’s notions of liberalism and reaction.” —
The Atlanta Journal-Constitution

“The best single book ever written about Oppenheimer.” —
American Scientist

Modern Prometheans have raided Mount Olympus again and have brought back for man the very thunderbolts of Zeus. —
Scientific Monthly,
September 1945

Prometheus stole fire and gave it to men. But when Zeus learned of it, he ordered Hephaestus to nail his body to Mount Caucasus. On it Prometheus was nailed and kept bound for many years. Every day an eagle swooped on him and devoured the lobes of his liver, which grew by night. —Apollodorus,
The Library,
book 1:7, second century B.C.

ROBERT OPPENHEIMER’S life—his career, his reputation, even his sense of self-worth—suddenly spun out of control four days before Christmas in 1953. “I can’t believe what is happening to me,” he exclaimed, staring through the window of the car speeding him to his lawyer’s Georgetown home in Washington, D.C. There, within a few hours, he had to confront a fateful decision. Should he resign from his government advisory positions? Or should he fight the charges contained in the letter that Lewis Strauss, chairman of the Atomic Energy Commission (AEC), had handed to him out of the blue earlier that afternoon? The letter informed him that a new review of his background and policy recommendations had resulted in his being declared a security risk, and went on to delineate thirty-four charges ranging from the ridiculous—“it was reported that in 1940 you were listed as a sponsor of the Friends of the Chinese People”—to the political—“in the autumn of 1949, and subsequently, you strongly opposed the development of the hydrogen bomb.”

Curiously, ever since the atomic bombings of Hiroshima and Nagasaki, Oppenheimer had been harboring a vague premonition that something dark and ominous lay in wait for him. A few years earlier, in the late 1940s, at a time when he had achieved a veritably iconic status in American society as the most respected and admired scientist and public policy adviser of his generation—even being featured on the covers of
Time
and
Life
magazines—he had read Henry James’ short story “The Beast in the Jungle.” Oppenheimer was utterly transfixed by this tale of obsession and tormented egotism in which the protagonist is haunted by a premonition that he was “being kept for something rare and strange, possibly prodigious and terrible, that was sooner or later to happen.” Whatever it was, he knew that it would “overwhelm” him.

As the tide of anticommunism rose in postwar America, Oppenheimer became increasingly aware that “a beast in the jungle” was stalking him. His appearances before Red-hunting congressional investigative committees, the FBI taps on his home and office phones, the scurrilous stories about his political past and policy recommendations planted in the press made him feel like a hunted man. His left-wing activities during the 1930s in Berkeley, combined with his postwar resistance to the Air Force’s plans for massive strategic bombing with nuclear weapons—plans he called genocidal—had angered many powerful Washington insiders, including FBI Director J. Edgar Hoover and Lewis Strauss.

That evening, at the Georgetown home of Herbert and Anne Marks, he contemplated his options. Herbert was not only his lawyer but one of his closest friends. And Herbert’s wife, Anne Wilson Marks, had once been his secretary at Los Alamos. That night Anne observed that he seemed to be in an “almost despairing state of mind.” Yet, after much discussion, Oppenheimer concluded, perhaps as much in resignation as conviction, that no matter how stacked the deck, he could not let the charges go unchallenged. So, with Herb’s guidance, he drafted a letter addressed to “Dear Lewis.” In it Oppenheimer noted that Strauss had encouraged him to resign. “You put to me as a possibly desirable alternative that I request termination of my contract as a consultant to the [Atomic Energy] Commission, and thereby avoid an explicit consideration of the charges. . . .” Oppenheimer said he had earnestly considered this option. But “[u]nder the circumstances,” he continued, “this course of action would mean that I accept and concur in the view that I am not fit to serve this government, that I have now served for some twelve years. This I cannot do. If I were thus unworthy I could hardly have served our country as I have tried, or been the Director of our Institute [for Advanced Study] in Princeton, or have spoken, as on more than one occasion I have found myself speaking, in the name of our science and our country.”

By the end of the evening, Robert was exhausted and despondent. After several drinks, he retired upstairs to the guest bedroom. A few minutes later, Anne, Herbert and Robert’s wife, Kitty, who had accompanied him to Washington, heard a “terrible crash.” Racing upstairs, they found the bedroom empty and the bathroom door closed. “I couldn’t get it open,” Anne said, “and I couldn’t get a response from Robert.”

He had collapsed on the bathroom floor, and his unconscious body was blocking the door. They gradually forced it open, pushing Robert’s limp form to one side. When he revived, “he sure was mumbly,” Anne recalled. He said he had taken one of Kitty’s prescription sleeping pills. “Don’t let him go to sleep,” a doctor warned over the phone. So for almost an hour, until the doctor arrived, they walked Robert back and forth, coaxing him to swallow sips of coffee.

Robert’s “beast” had pounced; the ordeal that would end his career of public service, and, ironically, both enhance his reputation and secure his legacy, had begun.

THE ROAD ROBERT TRAVELED from New York City to Los Alamos, New Mexico—from obscurity to prominence—led him to participation in the great struggles and triumphs, in science, social justice, war, and Cold War, of the twentieth century. His journey was guided by his extraordinary intelligence, his parents, his teachers at the Ethical Culture School, and his youthful experiences. Professionally, his development began in the 1920s in Germany where he learned quantum physics, a new science that he loved and proselytized. In the 1930s, at the University of California, Berkeley, while building the most prominent center for its study in the United States, he was moved by the consequences of the Great Depression at home and the rise of fascism abroad to work actively with friends—many of them fellow travelers and communists—in the struggle to achieve economic and racial justice. Those years were some of the finest of his life. That they were so easily used to silence his voice a decade later is a reminder of how delicately balanced are the democratic principles we profess, and how carefully they must be guarded.