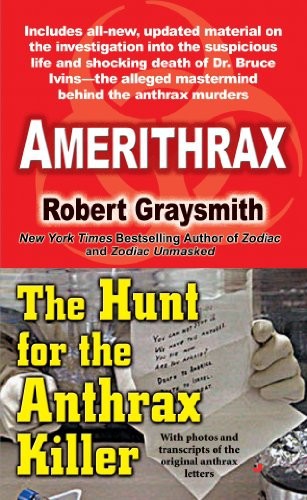 With photos
and
tnmcripts of
the original anthrax letters

Auto Focus: The Murder of Bob Crane Unabomber: A Desire to Kill

The Hunt for the Anthrax Killer

AMERITHRAX: THE HUNT FOR THE ANTHRAX KILLER

A Jove Book / published by arrangement with the author printing history

This book, or parts thereof, may not be reproduced in any form without permission. The scanning, uploading, and distribution of this book via the Internet or via any other means without the permission of the publisher is illegal and punishable by law. Please purchase only authorized electronic editions, and do not participate in or encourage electronic piracy of copyrighted materials.

Jove Books are published by The Berkley Publishing Group, a division of Penguin Group (USA) Inc.,

JOVE and the “J” design

Making or distributing electronic copies of this book constitutes copyright infringement and could subject the infringer to criminal and civil liability.

Visit our web site at www.penguinputnam.com

Special thanks to my editor at Berkley Books, Natalee Rosenstein, who asked for this book over lunch one sum- mer day. With editorial skill, she put this one-year story of the testing of America under her electron microscope and made it far better. I am also deeply indebted to the indis- pensable editorial and production staff who worked to bring this epic tale of the September 12 era into print: Es- ther Strauss, Sheila Moody, and Julie Rogers.

“You cannot spill a drop of American blood without spilling the blood of the whole world... Our blood is as the flood of the Amazon, made up of a thousand currents all pouring into one. We are not a nation, so much as a world.”

AMERICA
was the crime scene. American Flight 11 out of Boston bound for California soared down the Hudson River. At 8:46 a.m. it slammed into the north tower of the World Trade Center. A second plane, United Flight 175, another fuel-laden 767 jet, roared over the Statue of Liberty. At 9:03 a.m. it plowed into the south tower. Until now, on this warm, cloudless Tuesday morning, the city had been unu- sually hushed. With the Twin Towers in flames, trapped workers leaped from a hundred stories up. Some held hands on the way down. The Towers’ unconventional design con- tributed to their collapse. Single-bolt connections in their frameworks failed to secure the steel floor trusses. Bolts were pulled forward toward the center of the buildings, floor trusses sagged, and millions of three-quarter-inch bolts popped. Thousands of gallons of flaming diesel fuel melted steel girders supporting the spires. Massive floors began to collapse one atop the other all the way down.

The implosion of the south tower came at 9:59 a.m. Al- most four hundred thousand pounds of lead inside the thousands of personal computers vaporized when the 110- story tower fell. A thousand tons of asbestos insulation and mercury inside a half-million fluorescent lamps became a

deadly pathogen. Dioxins in millions of pounds of plastic chairs and desks and hundreds of miles of soft polyvinyl chloride cable became part of a deadly cloud.

As the building crumbled, mammoth slabs of concrete and car-sized hunks of burning metal rained down upon the rescuers below. The first implosion unleashed an impenetra- ble fifty-five-mile-an-hour tornado of dark gray dust and white soot. The rising wave of dust roiled up and down West Street and crossed over to cover the American Express office where people huddled for safety. The dust spewed east to Park Row. A black cloud “as dense as toner,” according to one witness, descended on people as they ran for their lives. Survivors running in the cloud of dust felt the force tearing at their clothes, a roar in their ears. The dust grew like a balled fist, a fine grayish powder that, with the force of the deadly attack behind it, swept the people along, threw them from their feet, and added new victims to the nearly three thousand already incinerated in the building and on the planes.

The dust turned day into night. The murky forms tossing within its gloom became living shadows. People in the street held hands with others so they would not lose their way. They tried to cover their noses and mouths. The smell was unlike any they had ever smelled. It was not like the smoke of crops burning in a field or that of a flickering fireplace. While there was no beauty to the dark cloud, there was a kind of sweetness to its odor.

The north tower collapsed at 10:28 a.m. Another mountain of powder, ash, and debris packed with hazardous material smashed windows. The swooping dark tidal wave choked everyone it engulfed and howled on through the canyons of New York City. The collapse coated much of lower Manhat- tan in asbestos-laced dust. New Yorkers, blinded with loss, wore masks just to breathe. Others wore respirators. Entire sections were evacuated as the smoking cloud rose.

No sooner had seven stories of rubble settled than heroes began searching the subterranean passages created by mam- moth blocks of concrete. They listened for the faint cries of the trapped and dying, and called out for help themselves only to find their voices silenced by the dust.

In the hours, days, weeks, and even months after the commercial aircraft assaults on New York and Washington, dust hung in the air over Manhattan like a shroud. The fine gray powder that got into the lungs of the rescuers at Ground Zero set about its secret work. Toxic dust collected in the recesses of the fire trucks and lingered there, contaminating firefighters over the next months. It got into the throats of those living miles away. “The metals burned into fine par- ticles,” said Thomas Cahill, a professor of atmospheric sci- ence. “They rose in a plume. There were at least eight days when the plume was pushed down into the city. Then people tasted it, smelled it, and saw it. But people who worked in the pile were getting it every day. Conditions were brutal.” Abundant chlorine from papers and plastics and metal-rich gases escaped to the surface. The poisonous cloud stayed where it fell, festering and ulcerating, causing who-knew- what future harm. Even months later the dust could still be smelled as far away as Greenwich Village—an electrical fire odor, like a short in a toaster.

An emotionally stunned America struggled to its feet and tried to stand. No sooner had it staggered a few steps than the next blow fell. The country was still reeling from the twin body blows of the attacks when the first deadly, dust- filled letter was mailed. Only weeks afterward, envelopes filled with a very similar dust and just as deadly as the twin explosions began to sicken the nation’s people and to claim lives just as randomly and senselessly as the four jets had that brilliant blue-skied morning.

Dust that appeared very like 9-11 dust trickled from an envelope a thousand miles away in idyllic Boca Raton, Flor- ida.