Read An Ecology of MInd Online

An Ecology of MInd 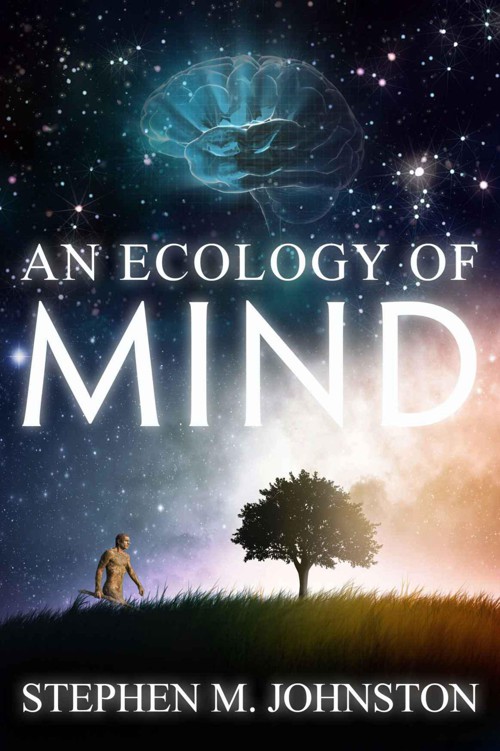 Acknowledgements:
I would like to extend thanks to Derek Murphy at CREATIVINDIE for his work in creating the cover and making the conversions to eBook formats.
I would also like to express my appreciation to Dr. John Doan and Laurie Johnston for their efforts and feedback during the process of completing the book.

Dedicated to my wife Laurie

for her unwavering support and encouragement

IT HAD BEGUN AS A BEAUTIFUL fall day but the sky had started to darken, and it looked like it might rain. Hopefully, the rain would hold off until he got
back to the camp, or even better, not rain at all.

It was fairly warm out today, but he knew that would be changing before too many days went by. He could already see that some of the leaves on the trees
around him had started to change. He was not overly worried about winter. The hunting in this area had been good, and the women from the tribe had been
busy gathering other foods and setting some of it aside for months. It looked like it would be a better winter than some he could remember.

His errand had seemed like a good idea when he started out, and he still thought it held promise. It was Sinjee’s womanhood ceremony tonight, and she was
being introduced to the mysteries of the goddess. Sinjee and he had been eyeing one another differently all summer. They had always been friends, but
lately it had begun to grow into something more. He knew she liked walnuts and had thought it would be a good idea to surprise her with some after her
ceremony.

He liked the way her face lit up when she ate them. The tribe preferred its members to marry outside the tribe but sometimes exceptions were made. Who knew
what may happen in the future?

He had noticed some walnut trees not too far from the camp when he was hunting with the other hunters of the tribe the other day. He had completed his
manhood ceremony almost a year ago and since then had been allowed to go with the hunters. He greatly preferred that over staying behind and helping the
women.

He had found the walnut trees that he remembered seeing without any trouble and had filled a bag made by folding one of his furs over. He was now on his
way back to where the tribe had been camping for the past half moon. He kept thinking of how Sinjee’s face would look when he gave her the walnuts.

The sky had gotten quite a bit darker, and the wind had picked up. He had picked up his pace slightly but was not overly worried. He preferred not to be
out in the rain but getting wet was a minor thing, if Sinjee liked the walnuts as much as he thought she would.

The searing light surrounded him, and every nerve felt like it was on fire. The loud bang was more like a physical blow than sound. He rolled weakly on the
ground and tried to make the world come back into focus. After a little while his head started to clear. He looked around and noticed the grass under him
was singed and smoking slightly. It started to rain very weakly, but it only lasted for a couple of minutes before stopping.

As his head cleared he realized he must have been hit by lightning. He had seen it hit a tree once and felt very lucky to be alive. When he saw lightning
hit that tree, the tree had exploded and caught fire until the rain had put it out. As far as he could tell though, he was unhurt, just shaken up, and he
seemed to be recovering from that.

This would be a tale to tell around the fire at night. His mother and father would probably scold him for being careless, even though he hadn't been.
However, that was nothing new and the story would be worth the minor complaints. There seemed to be newer tales to tell around the camp the last couple
moons since their tribe had split off from their old larger one.

It had become too difficult to hunt and gather enough for the larger tribe so his parents and some other families had made the decision to branch off on
their own. So far, it seemed like it had been a good decision. Moving into new areas with a smaller group made it easier to provide enough food for
everyone. He was a bit of an exception as he always seemed able to eat. New territories also meant more to discuss among the tribe, where the best areas to
locate game were, and good areas to find fruit and other food plants, and areas to avoid. This would be an excellent tale though and should make him the
center of attention for a couple of nights anyway. He smiled. It would probably impress Sinjee as well.

He got up a shakily and stood there until he began to feel steadier on his feet. He noticed his fur with the walnuts on the ground where he had dropped it.
One edge of the fur was a bit singed, and some of the walnuts had fallen out, but other than that it seemed fine. He put the walnuts that had escaped his
makeshift bag back into the fur, picked up his spear, and at a slower pace than he had been making, continued on towards his tribe’s camp.

As he went, the dizziness cleared, and he started to feel almost normal again. He had a very slight headache but felt very lucky to not be worse off. When
he got back to camp he would have to make an offering to thank the gods for looking after him. He was getting close and should be home soon.

He stopped suddenly. He thought he heard something different than the usual forest sounds. The sound was faint but seemed to be coming from ahead in the
direction of his tribe’s camp. He scrambled up to the crest of a small hill and listened again. He could hear it better now. The sounds were those of
screams and fighting. He began to run towards the camp.

He was in good shape, with a strong lean body, hardened by long runs during hunts. Still; he was breathing hard when he reached the clearing that held the
camp. His tribe was under attack. In several thousand years the attackers would be referred to as Neanderthals but his people called them the No Chins. A quick glance as he ran into the clearing showed several bodies on the ground. Most of them were his people. He could see the No Chins slaughtering the few remaining members of his tribe.

He dropped his makeshift bag of walnuts and with a yell, he ran towards the nearest No Chin with his spear ready to strike. In his single-minded rage to attack the one ahead of him, he did not see the other No Chin to his right turn towards him. He felt the blow and the incredible pain as the No Chin drove a spear into his belly and gasping, he fell to the ground clutching the bloody hole. He felt another blow to his head then all went black.

He had no idea how much later he woke up but there was no more fighting going on. He was very thirsty, and he had waves of pain from both his head and his
belly. He glanced around for enemies but all he could see from where he was laying was the bodies of members of his tribe.

He looked down at the wound in his belly and seeing the blood leaking from it; he clutched weakly at the wound trying to stop the bleeding. He was appalled
at the amount of blood he seemed to have lost already and thought desperately to himself, Nooooo! Stop bleeding!

He felt his mind reach out somehow, and he felt a connection to something he had never felt before. He had no idea of what it was, but it responded to his
demand. The bleeding stopped.

THE PROBE ENTERED THE STAR SYSTEM at slightly below light speed and decelerated rapidly. As its first priority, it began a scan for planets in the system.
Following a three-dimensional spiral path towards the star, it took an extended period of time to search the system for planets and any other items of
note, all the way around the star.

It discovered a number of planets of various types and sizes along with an assortment of moons and other inert natural masses. All of these would have to
be investigated in more detail later. The probe had noted no signs of life on its initial survey, but it would eventually make a closer more detailed
investigation of the planets.

With the initial exploration of the system completed, the star became a much bigger priority, and the probe changed course to head directly towards it. As
the probe got closer it resisted the increasingly powerful gravity pull of the star and slowed as it approached. The power the probe must have to be able
to resist the gravity pull of the star would have been very impressive if any observers had happened to witness it. There were none though.

Continuing to slow, the probe entered the interior of the star. The fact that it did not burn up as it entered would have been equally if not more
impressive to any observer.

Once it reached the center of the star, it paused briefly and then went to work.

Earth Bound by Christine Feehan
Delta Wedding by Eudora Welty
The Half Has Never Been Told: Slavery and the Making of American Capitalism by Edward Baptist
Hold Your Breath 01 - Stone Devil Duke by K.J. Jackson
The Knight Of The Rose by A. M. Hudson
Tracker: A Rylee Adamson Novel by Shannon Mayer
How We Die by Sherwin B Nuland
Chocolate and Italian Wine (Music and Mayhem Book 1) by Lili Porter
Cervantes Street by Jaime Manrique
Yellowstone Heart Song (Yellowstone Romance Series Book 1) by Henderson, Peggy L
Our partner