An Evening with Johnners (8 page) 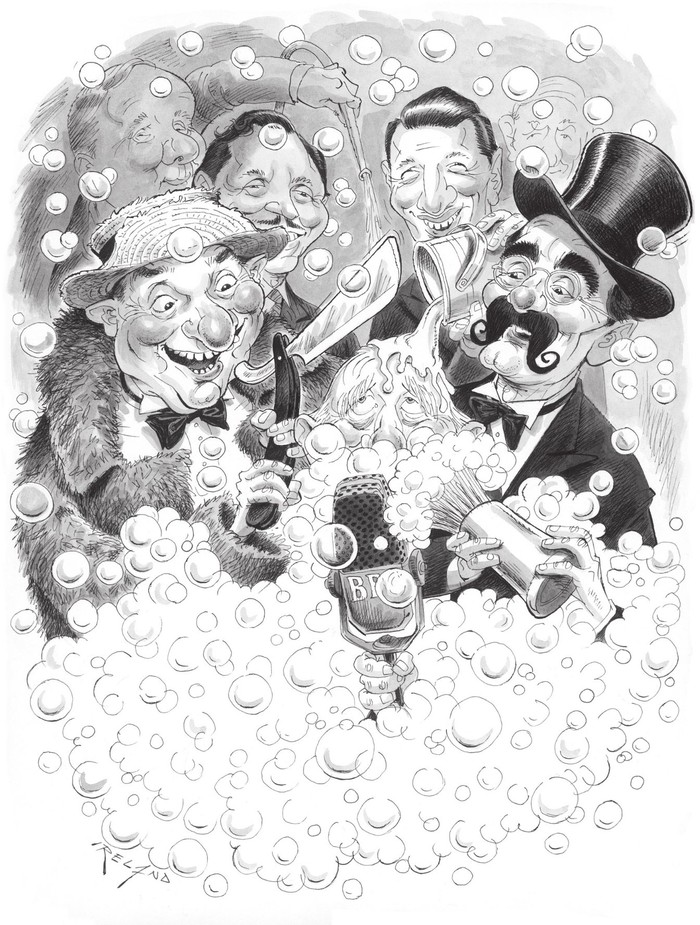 Bud had the idea of employing a tailor to come in each day for about a week to take a little bit off the bottom of Jack’s trousers and sew them up again. Jack noticed nothing for about four days and then he began to let out his braces until after about seven or eight days he discovered what was going on!

Once I was in Bud’s dressing room and he helped me on with my overcoat and said, ‘Good night. Nice to have seen you.’ The next day, to my horror, as I handed it in at a function at a rather posh hotel, I saw written inside:
This coat has been pinched from Bud Flanagan. Please inform the police at once.

I
did what I think was my favourite broadcast when I wheeled a street piano outside the stage door of the Victoria Palace and by arrangement Bud Flanagan came out. When they cued over to me, he put his hands on my shoulder and together we sang ‘Underneath the Arches’,
which is the only tune I can still play on the piano. That was a great moment, and I don’t think there is anybody else alive now who ever sang ‘Underneath the Arches’ with Bud, because dear old Chesney Allen is dead. 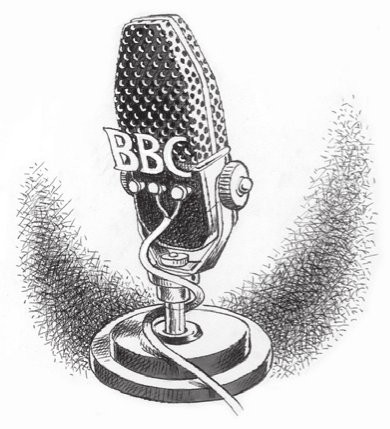 I
did funny things like going on the stage when Jimmy Edwards was doing his act with a tuba. I was told that if you suck a lemon in front of people in a brass band, they all dry up. So I asked if he’d mind if I interrupted his act on a Saturday night to see if he could go on playing. Which I did.

I walked out on stage and said, ‘Jimmy, I challenge you to go on playing while I suck this lemon.’

He started off going … [
tuba noises
] … marvellous stuff – and gradually, as I sucked and sucked, he went …
[splutter! splutter!
] … and he couldn’t play. So that worked!

I
was the hind legs of a donkey at the London Palladium with Tommy Trinder, and once they put me inside a pillar box. They searched the whole of the British Isles and they found one big enough to take me, outside the Post Office at Oxford. The idea was to help the Post Office at Christmas time and when the letters came through to say, ‘Well, that one should have had another stamp on it; that one’s badly addressed,’ and so on.

So I got inside with my microphone and I was talking away and you could hear the noise of the letters dropping in, and when my stopwatch showed that I had got about thirty seconds to go, I said to the listeners, ‘I’m just going to stand up now,’ and I could hear the clip clop of high heels coming.

I saw a woman’s hand about to post a letter and I put my hand out and took it. The poor lady fainted!

I
went out in the street, disguised as a tramp, with a hidden microphone and sang ‘Tipperary’ and ‘Pack Up Your Troubles’. That needs a lot of moral courage, to go out in a crowded Strand, as it was on a Saturday night, and start singing. So if I ever see someone singing now, I try to give them something – ten pence perhaps – because I know what they’re feeling. In fact, I think I earned about
thirteen pennies in three minutes, which wasn’t a lot, but it was better than nothing.

I
was even hypnotised once, which I won’t go into great detail about, but roughly, if you are going to be hypnotised, you have to agree that you want to be hypnotised first. This chap got me under and he made me laugh as if I was crazy. I knew I was laughing and I couldn’t stop until he clicked his fingers and just said, ‘Right. Open your eyes.’

We put it out on the air and it sounded perfectly all right to us but the telephone never stopped ringing with people either saying it was the funniest thing they’d ever heard, or saying it was disgraceful, it was maniacal and the devil had taken hold of Mr Johnston! So that was unfortunate, but it is one of the penalties of doing things ‘live’.

O
ne other thing we tried. You know you can see an advertisement in the paper saying: ‘Meet me under the clock at Victoria at eleven o’clock.’ Who reads these? Who puts them in? We thought we’d try it out and I knew the editor of the
Evening
News
, so I said, ‘Would you put this in on Friday night? Don’t tell anybody and we’ll see what happens.’ The notice was:

I thought we must have a password, because I couldn’t believe anyone would come, and at least I could go out and shout, ‘How’s your uncle?’ to passers-by.

So, I’d been doing cricket at Lord’s and came down in a taxi about quarter past seven, and said to the taxi driver, ‘Hurry up, I’m a bit late.’

He said, ‘I can’t do anything, Mr Johnston. Piccadilly is very crowded.’

So I said, ‘Well, I’ll get out,’ and I made my way through the crowds and into the front of the Criterion and then looked out through the revolving door into Lower Regent Street and it was absolutely jam-packed.

Police were holding everybody back. There were young ladies, some beautiful and some not so beautiful, and dotted among the crowd, young men with blue and white spotted scarves and red carnations. I told the listeners, ‘This is going to be chaotic, but I’ve got to go out there and try to interview these ladies.’

So I went out and there was a loud roar of ‘How’s your uncle?’ and I interviewed some of them and they all swore that they knew nothing about it being a broadcast. They’d wanted to see what this adventure was and, very nice of them, they weren’t disappointed that I was neither well set-up, young, or a gentleman.

But it showed that the ad worked and it got an amazing reaction. The
People
next day had headlines on the front page: ‘STUPID BBC STUNT STAMPEDES PICCADILLY’ … ‘disgraceful Brian Johnston’ … and so on.

So I had my tail between my legs a bit on Monday morning when I went to see my boss, expecting a rocket. ‘Sorry,’ I said, ‘I obviously made a porridge of it.’

‘No,’ he said, ‘they always say we’re a staid old Auntie BBC, but as soon as we do something unusual they attack us, so we’ll support you, Brian.’

So I said, ‘Thanks very much,’ and left the room.

I had this awful habit then (and I’ve still got it) of ringing people up and pretending to be someone else. A few minutes after I’d left the room, the telephone rang and my boss picked up the receiver and said, ‘Yes.’

My boss said, ‘Look, Brian, we’ve had enough of this. Would you mind ringing off.’
Bang!
He slammed the phone down.

Of course, the chap rang back about two minutes later and said he really was the Inspector!