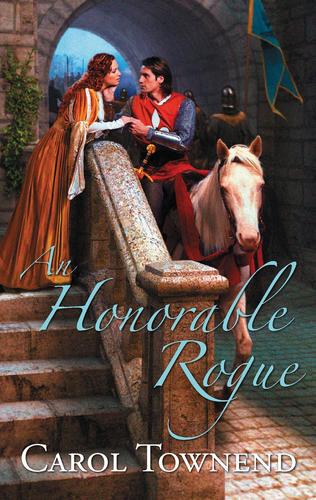 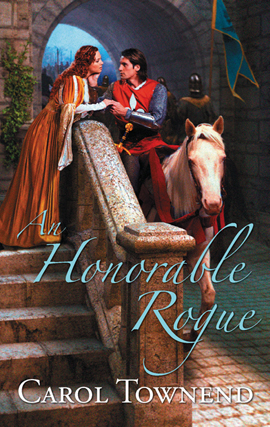 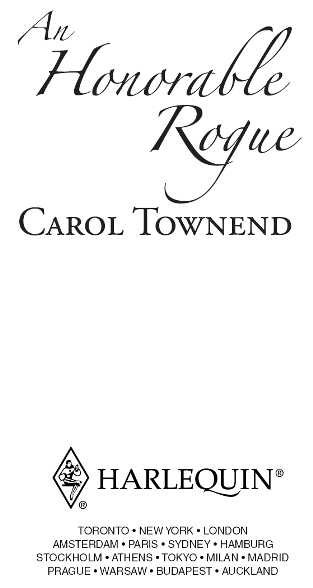 Even though it was Witches' Night, the first time the door latch rattled Rozenn was not alarmed. The sun was yet to set, and she was expecting her young friend, Mikaela.

In any case, Hauteville, the quarter of Quimperle in which Rozenn lived, was scarcely the town slum. At the top of Quimperle, built on the edge of a rocky outcrop overlooking the main town and castle, Hauteville remained a reasonably safe place in which to live--even the lawlessness that followed the recent killing of Duke Conan had not reached Hauteville. However, this was 1067 and the times were uncertain, so just in case it wasn't Mikaela, Rozenn shoved the silver coins she had been counting back into their pouch and draped some sewing over them. Her little hoard--except that now it was not so little--was growing.

Perhaps today was the day to tell Mikaela she planned to leave Brittany, possibly forever....

As she expected, it
was
Mikaela outside; she was busily fastening a garland to the door in the fading evening light. Overhead, screeching swifts traced arcs in the sky; house martins darted in and out of their nests under the eaves.

'Mmm.' Mikaela's fingers were busy with the garland, tweaking, adjusting. 'How did you work that out?'

Mikaela and her father ran the local tavern, the White Bird, and since a veil was not practical for cooking and cleaning. Mikaela often dispensed with it and forgot to put it back on when she went out about town.

Rozenn glanced at the garland, a Midsummer's Eve garland. Yellow St John's wort gleamed against glossy bay leaves; corn marigolds winked out from between trailing strands of ivy; yarrow and elder flowers nodded in the warm breeze that was drifting up the narrow street from the river and port below....

'Pretty.' Rozenn smiled. Mikaela was using the same rusty nail she had hung her garland on the previous year, and the year before that. Mikaela was a creature of habit. And very superstitious.

Mikaela shoved her plait over her shoulder and threw her a look. 'Pretty's not the point. Rose. This is meant to protect you.'

'Against witches.' Rozenn managed not to laugh.

'Of course. Don't roll those brown eyes at me. This--' Mikaela flicked at the St John's Wort, dusting her fingertips with the heavy pollen '--will see you safe till the feast of St John the Baptist on the morrow and this--' she indicated a sprig of bay '--wards off witches and evil spirits--'

'Oh, Mikaela...' Rozenn shook her head with a smile '...you're wasting your time. I don't believe in the old tales."

Mikaela gave the garland on Rozenn's door a final tweak and stepped back to admire her handiwork. 'Maybe that's your problem,' she murmured, wiping pollen on to her skirts.

'I beg your pardon?"

Mikaela shrugged. 'Too serious, that's your trouble. You could come down to Saint Columban's tonight, find out who your true love is.'

'Please. Rozenn. Nicole and Anna are coming. It would do you good to join in. See it as a bit of fun. Your time of mourning is over, there's no need to feel guilty.'

'I don't feel guilty," Rozenn said. 'I simply think it is folly, a waste of time and sleep. Walking seven times round a church at midnight, for heaven's sake. As if that will tell you your true love. It's utter lunacy."

'You don't have to believe in it, it's
fun.'
Mikaela took her hand and squeezed it gently. 'Per wouldn't mind. He'd want you to be happy, to find someone else. And if the spell does work--' she grinned '--you'll learn who your true love is'

'But I already know that." Rozenn said, before she could stop herself.

Rozenn could have bitten out her tongue; she had planned to be subtle when she told Mikaela her plans, not blurt them out like a fool. Abruptly turning her shoulder, she fingered the gold cross she wore on a chain round her neck and gazed down the cobbled street as it ran down to the quays and the castle in Quimperle proper. Overhead, the house martins threaded back and forth across a pink-streaked sky.

'Nothing.' Rose wiped her forehead with the back of her hand and sighed. Young Anton was toiling up the hill, pulling a hand cart laden with bales of cloth, destined doubtless for Mark Quemeneur, the town's main tailor now her husband was dead. 'That boy will have to hurry if he wants to get to Mark's workshop before he locks up for the evening.'

Rozenn sighed, it was nothing. Mikaela, I spoke out of turn. It was so hot in Countess Muriel's solar today, my brain must have addled.'

As Anton and the cart rumbled by. Mikaela tugged at her hand, trying to make her meet her eyes. 'No escape, Rose. You said something extremely interesting. You said you already know who your true love is, and it didn't sound to me as though you were referring to Per.' Mikaela's voice was light and teasing, but she was frowning, I know you were fond of him, but you were hardly starry-eyed when you married. You didn't mean Per, did you? Is it someone I know?'

'Leave it, Mikaela. I spoke without thought.'

'Tell me. Rose.' Mikaela said, softly wheedling. 'Tell me who you love.'

'No.' Rozenn tossed her head and laughed at her friend's persistence. 'In truth. I was going to tell you some time soon, but since this has you in such a fever, you have to guess. I'll share my supper with you if you guess his name.'

'Not fair, since you were going to tell me anyway.'

'It's more fun teasing you! And did my ears deceive me, or didn't you just say I needed to have more fun?'

Mikaela narrowed her eyes. 'That, Rose, is a low blow."

'Go on,
guess!
I went to the castle bakehouse and Stefan gave me a chicken pie that would feed a giant. There's far too much just for me.' She moved to the threshold, and pulled her garlanded door fully open. 'Come in, please. Your father will know where you are."

The house that Rozenn had shared with her husband was, like most of the merchants' houses in Hauteville, a two-roomed dwelling, wattle and daub on a wood frame. The room at the front, facing the street, had wide shutters that Per used to fling open to display the shop and its wares. The shutters were pulled to now, and the shop was stuffy and full of deepening shadows. A further door led through to the room behind the shop, the living room where Rozenn and Per had cooked and eaten and slept. Light glowed there and the girls moved towards it, long skirts rustling. The shutter on the far wall was open, and the back of a neighbour's house was dark against a purpling sky.

As they passed through the shop. Mikaela's gaze fell on the shelves, half of which were empty. Her frown deepened. 'Your stock, Rozenn? Where's all the cloth?'

'Will it pay Per's debts?' Mikaela asked, knowing how upset her friend had been to discover that her husband owed several of the townsfolk money.

Mikaela indicated the remaining stock. 'And what happens to this lot?'

Rozenn smiled. 'I plan to sell it on market day. Mark offered me a reasonable price, but you know what a huckster he is. These fabrics should sell quite easily, and I think I can make more money myself.'

'You'll still take in sewing, though?"

Rozenn murmured something noncommittal and turned away, not quite ready to reveal her plans to leave the Duchy. 'Mark was pleased to have the damasks and the Byzantine silks. Oh, and before I forget. I saved you a length of that blue velvet you were so taken with.'

'Don't be silly. Per may have left debts, but I am not so encumbered that I can't give you a gift.'

'You are generous. But what will you do without your shop? You will keep on with your sewing? Rose, you must. You're so clever with a needle, you'll never want for work.'

Leading the way into the living room, Rose smiled and bent to add a log on to the fire in the central hearth. Taking a taper, she lit a couple of candles and waved Mikaela to a stool. 'Aye. there's always needlework." She picked up the sewing and her heavy money pouch and dropped them on the bed by the wall. It was such a relief to know that soon she would be able to pay off Per's debts.