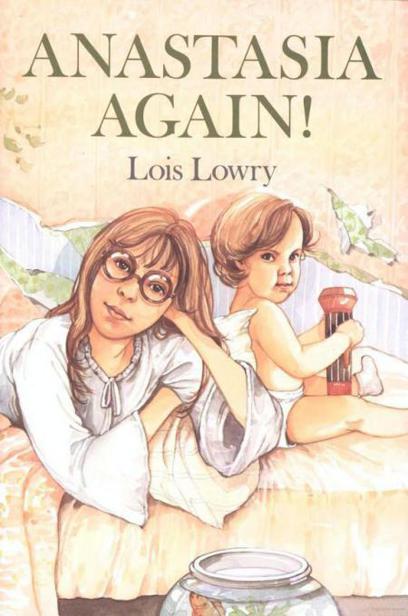 "Yeah," said Anastasia, remembering. "You thought I'd been kidnapped, when you came to my room to wake me up and I was gone. Actually I was outside picking all your tulips."

"I could have killed you for that. It was the first time I'd ever grown really terrific tulips."

"I wish you
had
killed me for that. Because there isn't any point in living if you have to live in the suburbs."

Her father put down the magazine he was reading,
The New York Review of Books.
He was reading an article called "Morality and Mythology." Anastasia didn't have any idea what that meant; but she liked it that her father knew what it meant and that he liked reading about it, and she was absolutely certain that there wasn't a single person in the entire suburbs of the United States who would ever in his entire life read an article called "Morality and Mythology."

"How on earth," asked her father, "can you be so sure you would hate the suburbs when you have never lived anyplace but this apartment?"

"Daddy," Anastasia pointed out. "I
read.
You know that. You yourself taught me to read when I was four years old. I read books about the suburbs. I know what people who live there are like."

"Not like us, that's for sure. One, they live in split-level houses with sets of matching furniture. Can you
imagine
that? Rooms of cute matching furniture? Good grief. I mean, think for a minute about our living room here in this apartment. Think of all the neat stuff we have in it."

They thought. "Books," said her mother.

"Right. Millions of books. There aren't any bookcases in split-level houses. Right where the bookcases should be, people in the suburbs have a huge color TV instead."

"We have a TV," said her father. "In fact, I'm about to miss the first inning of the Red Sox game."

"Daddy, we have an ancient, small black-and-white TV. And there are books on top of it, books behind it, books in front of it. That's not the same. I'm talking about a monster color TV, and on top of it is a bowl of fake fruit."

"Fake fruit? Are you sure of that, Anastasia?"

"Absolutely. Just look in the Sears ads in the paper. But forget that for a minute. Think some more about our own living room."

"Paintings," said her mother. "I think people in the suburbs have paintings on their walls."

"I wish you'd get rid of that, Myron," said Anastasia's mother.

"Annie was a fine painter," muttered her father. "And a fine person. You would have liked her. You will like her if she ever comes back from Central America. We'll have her for dinner."

"Over my dead body we'll have her for dinner," said Anastasia's mother.

"Mom. Daddy. You're missing the point. The point is hat we have meaningful paintings on our walls."

"And people in the suburbs do not?"

"No, they definitely don't. They have pictures of the
Sierra Nevadas, painted-by-number. Or else pictures of kittens with big eyes, playing with balls of yarn. It goes with the matched set of furniture."

"Actually," said her mother, "our furniture is pretty awful, some of it."

"No, it isn't! We're the only people in the whole world who have a white couch with a big sunflower embroidered on it!"

"Anastasia, the only reason for the sunflower is because I had to do something to cover up the spot where Sam threw up."

"But that's okay! I mean it's okay in the
city.
But if we lived in a split-level house in some development, people wouldn't understand it."

"A
NASTASIA
," said her father, in the booming voice that he used only when he was beginning to be quite annoyed with something, "Y
OU'RE MAKING ASSUMPTIONS.
"

"I am not. I never make anything. I didn't make the school basketball team, even."

"You are making assumptions."

"I don't even know what assumptions are. I can't even make decent brownies."

"I didn't make the finals in the sixth-grade spelling bee. I can't make
anything.
"

"Y
OU ARE MAKING HASTY JUDGMENTS
! I
DIOTIC PREMATURE ASSUMPTIONS
! A
ND YOU ARE ALSO MAKING ME MISS THE RED SOX GAME ON TV
!"

Now Anastasia knew that he was really getting mad.
She scowled. "I hardly ever even make my bed," she muttered. "The last thing I ever made in my life was a dumb potholder, in third grade. I
never
made a premature assumption. If I did, it would come out crooked."

Her mother sighed. "I'll tell you what you make, Anastasia. You make life very difficult sometimes." She began to pick up the chocolate pudding bowls from the table. "Let's let your dad watch the ball game. I'm going to wash these dishes. You want to help, or do you want to get Sam up from his nap? We can talk about all of this later."

"I'll go get Sam. Unless maybe he's already jumped out the window. He's getting old enough to figure stuff like that out."

The whole apartment had a history, and it was
her
history and her parents' history and beginning to be Sam's. She had planned to show Sam how to thump the walls with that hollow sound very soon. The thought of moving made her stomach ache.

"And we didn't even have a chance to talk about the
other
stuff!" she called back toward the kitchen, where she could hear her mother washing the dishes. "That we would have to have a
car,
for pete's sake! We would have to pollute the atmosphere with a car! And I would have to do dumb suburban stuff. Probably I would have to be a Girl Scout!"

There wasn't any answer from her mother. In the living room, she could hear her father turn the volume up on the TV to drown her out.

"You could never
ever
wear jeans any more, you know, Mom!" she called. "Ladies in the suburbs only wear cute cotton dresses from Lord and Taylor's!"

No answer. She stood still for a minute outside Sam's door.

"And they play
bridge
every afternoon! And have affairs with the neighbors' husbands! Do you
realize
that?"

No answer. Her mother was washing the dishes very loudly, which meant that she was getting pretty mad. In a minute she would probably throw a dish.

"Oh, rats," muttered Anastasia to herself, and opened the door to her brother's room. Once, before Sam was born, it had been the dining room. It was true that they were outgrowing the apartment. But it didn't matter. Not as much as the other things mattered.

"Hi, Sam," said Anastasia. Her brother was sitting in his crib with a blanket over his head, chuckling. "Quit
being so cute," she said. "I have terrible news." Sam took the blanket off his head and looked at her. His face had sleeping wrinkles on it.

"Frank Goldfish is going to die," said Anastasia sorrowfully. "Goldfish can't survive things like moving to the suburbs. Suburban goldfish are different, anyway. They have tanks with all that plastic junk in them: castles and little fake divers. Frank just likes his little ordinary city-goldfish bowl. I am quite certain that Frank will not survive this."

Then she realized that Sam didn't care about that. It was Sam who had flushed Frank the First down the toilet.

"And also," she told him sadly, "I know that your blanky won't survive. Moving men absolutely refuse to move grubby old blankies. I'm sorry to tell you that, Sam." She lifted him out of his crib and took his faded yellow blanket away from him. He grabbed for it, missed, and burst into howls.

"It's really too bad about your blanky, Sam," Anastasia said in a soft, mournful voice. "I suppose we'll have to put it out for the trash men to pick up."

Sam stamped his small bare feet. "Gimme my blanky!" he roared, grabbing for it. Anastasia held it up higher.

"I'm so terribly sorry, Sam," she said in a stricken tone that she was imitating from an old movie that had been rerun on TV recently. George Brent telling Bette Davis that she had a brain tumor.

Sam's howls turned into shrieks, and he threw himself on the floor and began to kick.

"Mom? Dad?" called Anastasia. "I just told Sam the news! Can you hear him? He doesn't want to move to the suburbs either!"

Anastasia went to her room to sulk. She always left the door open when she was sulking. She had perfected the art of sulking, and one of the essential points was that people had to
know
you were doing it. So it was important to leave the door open.

She lay on her bed, which was the best place for sulking, and was visible from her open door. But when no one was walking past her room, sulking was boring. So, to pass the time, she got out the notebook in which she intended to write a mystery novel. She had been intending to write it for almost a year, as soon as she could think of a title. She had decided to write a mystery after she began to think that Nancy Drew mysteries had no relationship to real life. Whose real life, after all, included haunted houses, spiral staircases, or twisted candlesticks? Yet real life—especially Anastasia's real life—was full of mysteries. For almost a year, she had been making notes about the mysteries of her own existence. None of them yet seemed to lend themselves to an entire book. "The Mystery of Why I Am Not Allowed to Go to X-rated Movies Even Though I Have Known All the Facts of Life Since I Was Six," for example, was a legitimate mystery of real life; but she couldn't seem to go on to write a novel about it.