and collected a second elution of 100 m L in case any DNA remained on the column membrane. This extraction represents the sample from which the full 445 bp of nuclear DNA was generated
( 1
) .

We selected intron 7 of the nuclear-encoded
fi brinogen beta chain (FGB)
gene for sequencing. Due to the level of fragmentation incurred by aDNA, we designed a series of overlapping primer sets (Table 1 in
( 1
) ) to amplify fragments no longer than 170 bp, including the primers. To design the primers, we downloaded and aligned all available
FGB intron 7
sequences from GenBank. We used SeqBuilder v8.1 (DNASTAR) to design primers, which we selected to bind in regions that are conserved across the
Columbidae
.

When we could not identify conserved regions, primers were designed to match most closely previously sequenced species belonging to the typical pigeons and doves
( 6 )
. We compared the results of the two extraction protocols by attempting to amplify nuclear DNA using primer set
FGB
-F6R7. 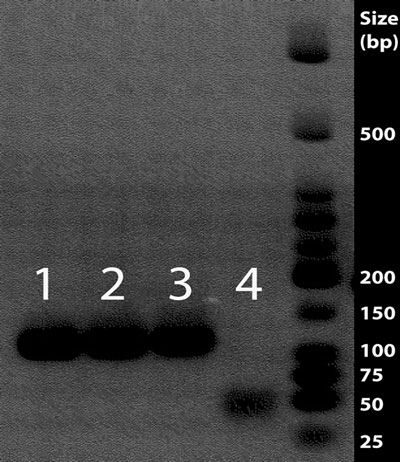 conditions were 94°C for 90 s, 60 cycles of 94°C for 45 s, 45 s at 48°C, 68°C for 90 s followed by 10 min of 68°C. We used a negative PCR reaction (containing no DNA extract) as the last reaction in each PCR. We amplifi ed eluates from both extraction protocols, and results ar
e shown in Fig. 1
. Extraction negatives were previously run in separate reactions and were blank.

est v0.1.1 ( 11
) . Two runs of fi ve million generations each were performed simultaneously, sampling every 200 generations and a 10% burnin. We assessed convergence by visualizing the traces in MrBayes and determining a potential scale reduction factor (PSRF) of ~1.00 for all parameters. Trees were visualized in FigTree v.1.3.1

( http://tree.bio.ed.ac.uk/software/fi gtree
) and the ML tree with MLBP and Bayesian posterior clade probabilities (BPP) is shown
in Fig. 2 .

Fig. 2. Molecular phylogeny of
Columbidae
based on a maximum likelihood analysis of available sequences of
FGB intron 7
.

Node support is indicated by maximum likelihood bootstrap (MLBP)/Bayesian posterior probability (BPP). Nodes supported by 100% MLBP and BPP = 1.0 are indicated with a star; nodes with <75% MLBP and BPP <0.95 are unlabeled. Common names are indicated on the
right
, where applicable. Figure is ada
pted from ( 1
).

a large elution volume was used in the extraction utilizing the Qiagen kit, a second elution from the same column produced a
band of the same intensity as the other extractions (lane 2, Fig. 1 ),

highlighting the utility of a second elution off the column either at the time of initial extraction or after cold, dry storage (this also works well for silica columns).

Despite the high success rate of DNA recovery and amplifi cation from this sample, several steps could have been taken to increase DNA yield. In subsequent tests with toe pads from other specimens, prolonged exposure to heat, as was applied during the silica extraction, resulted in signifi cant decreases in DNA yield compared to exposure to much shorter periods of warming (48 h). In these experiments, 20 m L of 1 M dithiothreitol (DTT) was added to the extraction buffer to aid in the dissolution of the tissue (B. Letts, personal communication). Following these results, our lab began to routinely include DTT in extractions of bird toe pads using the Qiagen DNeasy extraction kit, and we noted that this step signifi -

cantly reduced the amount of time required to completely dissolve the tissue. When only proteinase K and heat (and EDTA, but this is included primarily for bone decalcifi cation) are applied to dissolve tissue, this process can take over a week; with buffers including detergents to disrupt tissue (as in the Qiagen tissue lysis buffer), dissolution can still take several days. We now routinely perform toe pad extractions by rinsing the intact toe pad in 0.5 M EDTA to wash away inhibitors, and then follow with the Qiagen DNeasy tissue extraction protocol, modifi ed slightly by (1) including 20 m L

of proteinase K solution after 24 h. We prefer warming in an incubator rather than a heat block, as the heat is more evenly distributed in the incubator. In our experience, most toe pad and desiccated tissue samples are dissolved after the fi rst 24 h and all are dissolved after 48 h. The procedure then proceeds as per the manufacturer’s protocol, although the elution volume is generally reduced to 50 m L, since the eluate can be diluted afterward. This procedure has yielded viable mtDNA (nuclear DNA not tested) from over 90% of pigeon toe pad specimens processed in our lab, including a specimen that was lacquered and several that were on display and exposed to light for many years.

The exceptional preservation of this specimen led to the recovery of a 445 bp sequence of
FGB intron 7
; the fi rst nuclear sequence 4 Case Study: Recovery of Ancient Nuclear DNA…

amplifi ed from the extinct passenger pigeon
( 1
) . Maximum likelihood and Bayesian phylogenetic analyses indicate strong support for a sister relationship between the passenger pigeon and other New World
pigeons (Fig. 2 , adapted fr
om
( 1
) ), confi rming a single origin for pigeons in the New World. Phylogenetic analyses and sequence acquisition methods are described in detail in
( 1 )
. In conclusion, we illustrate the possibility of obtaining nuclear DNA from well-preserved historic toe pad specimens from multiple DNA extraction methods to uncover information about an extinct species.

We thank Clemency Fisher and the National Museums Liverpool for providing

Ectopistes
material for analysis. Funding for this research was provided by the Pennsylvania State University to BS

and an Undergraduate Discovery Grant to SMW.