Read And Then Comes Marriage Online

And Then Comes Marriage 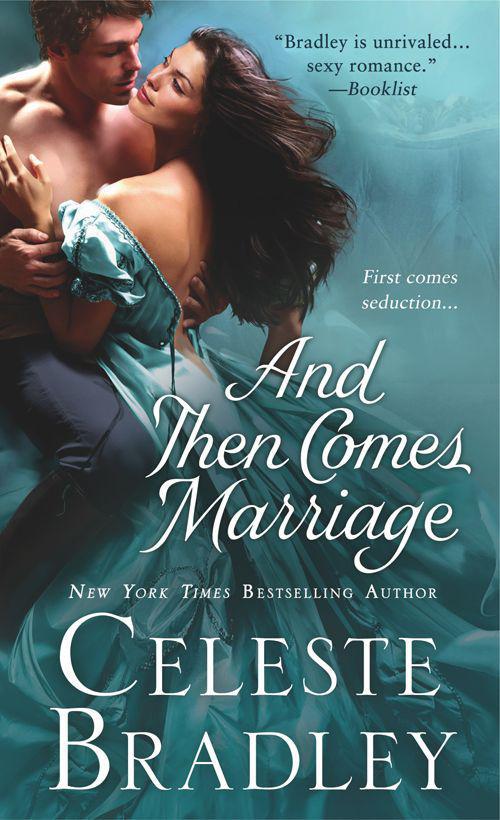 If only I dared, I might be the most blissful of women—although tiresome good sense rushes to assure me I might well be the unhappiest, with a lifetime of regret ahead of me and only sweet memories behind.

I think I might take either future rather than live one more day in this tedious shelter of “unloved” and “overlooked.”

If only I dared.…

Mrs. Gideon Talbot strolled sedately down the walk. Miranda was without her maid today, for poor Tildy had a bad cold and was nestled up in her attic bedroom with a hot pot of tea and a crock of broth.

Miranda liked feeling unfettered by company. Why exactly did a lady need to be accompanied by a maid at all times? Tiny Tildy could hardly protect her in a crisis. Nor was Tildy needed to carry parcels, for Miranda merely gave the vendors her address, and everything she purchased was delivered promptly and without fail.

When one was a wealthy, respectable widow, the world tended to do as it was told. Such a position was quite refreshing, to tell the truth.

So instead of making her usual round of shops and vendors, Miranda directed her hired hack to let her off in an unfamiliar neighborhood.

It wasn’t as though she actually expected to see
him
here. She was simply curious. She knew he resided nearby and wished to know a little more about the man she could not stop thinking about.

And then, ahead of her, as if summoned by her thoughts, a tall, brown-haired fellow stepped out of an alleyway and ran across the street, dodging carts and riders and piles of horse apples.

Miranda knew that man. She knew the breadth of his shoulders and the way his hair curled down over the back of his collar and most especially she knew that hard, muscled horseman’s bottom.

It had sat upon her sofa for most of the last month of afternoons, while she plied its owner with tea and conversation.

Mr. Worthington was a handsome fellow indeed, but his primary attraction for Miranda was his easy smile and his wicked sense of humor. After her dry, lifeless, loveless marriage had turned to a quiet and dusty widowhood, the heat and light generated by Mr. Worthington’s calls had become the climax of her days.

It was entirely proper for her to have a gentleman caller or two, she reminded the harsh voice echoing in her mind from her past. She’d completed her half mourning, and she’d allowed only two entirely respectable fellows through her very respectable door. Their calls took place in the bright light of afternoon and rarely lasted more than a congenial half-hour.

If her mind sometimes wandered to Mr. Worthington’s wide, capable hands, or if her eyes lingered on his lips, or if her imagination waxed eloquent on the probable feel of his muscular buttocks in her hands, well, no one had to know what went on behind her demurely downcast eyes, did they?

Mr. Worthington had not called upon her in the last few days. Miranda told herself that she wished only to determine that he was well … although perhaps a broken bone or three would most gratifyingly explain his strange and abrupt absence after he’d been so attentive!

So it was merely out of friendly concern that she now strolled in the vicinity of his home. She hadn’t followed him there; truly she hadn’t.

However, since he was there and, by random chance, so was she, and they happened to be dawdling on the same street … well, she could go on all day in her mind on how she wasn’t tracking the man like a hound on a scent, but the fact remained that she was doing exactly that.

Now, even after so brief a separation, the sight of him made her smile.

I believe I am giddy. Impossible! I am much too mature and respectable to become giddy.

Thirty-one years of age and a widow, to boot! How could the mere sight of a certain fellow transform her into a mooning schoolgirl?

This is unbearable. I refuse to participate in this—this preposterous state of affairs for one more moment.

Didn’t he look fine, though, with the early summer sunlight pouring over him like golden honey, gleaming his light brown hair and creating that intriguing shadow just beneath his chiseled cheekbone? He was so handsome.

Panic set in. What should she do? Should she be casual and assured and greet him nonchalantly?

Should she stand here like an empty-headed bit of plaster statuary and hope he spotted her?

Miranda bit her lip as she considered her dilemma, or was she considering Mr. Worthington’s bottom? It was muscled and hard, clad in tight riding breeches and just the right shape and form for a man.

No, the derrière in question was without a doubt a superior specimen.

And it belonged to her.

Or, it could belong to her if she dared. That very bottom had sat upon her parlor sofa for many afternoons in the past few weeks … day after day of visits and cups of tea and delightfully witty conversation. To Miranda, good conversation was more heady than wine. Her late husband had never been much of a talker … or a listener.

Gideon had been a highly regarded gentleman, a catch, really, for a plain girl like her, with her gawky elbows and knees and that unfortunate tendency toward flatness in the bosom.

It wasn’t Gideon’s fault that he’d not realized she wished to talk. She’d been virtually ordered to silence by her grandmother while he courted her.

That harsh voice rang from the mists of the past once again. “You’ll sit silently and you’ll keep good posture and you’ll nod but not too much! Mind you, smile but not too widely!” The echoes of her grandmother’s ranting rang as fresh as ever. “You’ll not shame me like your wild mother, that hussy! That my pathetic son should have dishonored himself for her—”

Well, the rest of that was better not thought on.

Time and maturity had finally gifted Miranda with a bit of bosom and she’d learned to manage her elbows and knees with grace, mostly by keeping her movements slow and flowing.

Yet she’d never truly been able to stop her mind from coming up with odd things to say. She’d only learned to keep her mouth from uttering them.

The derrière—er, the man she’d been observing—left the building that he had briefly entered, only to dart across the street and back down the alleyway opposite.

Curiosity, while unbecoming in a sedate and mature widow of thirty-one years, mewed piteously and scratched to be let in.

Frowning slightly, Miranda could not resist pausing in her perfectly innocent and not-at-all-unseemly stroll to peer down the alleyway when she came abreast of it.

She could see very little but dingy cobbles and shadowy rubbish bins. The morning sun did nothing to illuminate the narrow lane between the tall brick buildings.

Tilting her head, Miranda listened carefully, but heard only a few strange banging noises, amplified oddly by the narrow passage.

Ladies, especially not sedate widows of a certain age, did not trot down dark alleyways after men.

Yet the unfettered sensation caused by dutiful Tildy’s absence gave a gloss of freedom to Miranda’s thoughts, a sheen they’d not had for so many, many years.

Besides, Mr. Worthington was a nice, respectable fellow, prone to amusing conversation about books and current events. Perhaps he had a perfectly good reason to be in such an odd location on a weekday morning.

She opened that figurative door, and curiosity strolled in, tail high and crooked in a question mark at the tip.

Without really allowing herself to ponder the question further, Miranda began to pick her way down the dim, narrow alley, careful to avoid soiling her hem on any of the many wads of nameless really-rather-not-know on the damp, slimy cobbles.

She lifted her skirts with one hand and used the other to trail along the brick wall to her right, as if by keeping a few fingertips on something solid, she could prevent being swept away by her own curiosity. She kept close the wall, stepping away from it only briefly to avoid something especially noxious at her feet.

The distant clanging noises increased in tempo and volume. Now it sounded as though a machine were grinding away. She could definitely distinguish the grinding gears, pistons pumping, steam whistling.

Curiosity swiveled its ears and quivered its whiskers.

What in heaven’s name could lie ahead?

Pollux Worthington turned to his companion and smirked. “I told you it would work!” His green eyes gleamed.

Castor Worthington, who looked a great deal like Poll—being his identical twin, after all—only frowned as he pondered the giant contraption that took up most of the space in this crook in the alleyway. It was so large, they’d had to do most of the secret final assembly here, in this canyon of brick and stone, with bad light and the constant chance of discovery.

It was a steam engine, at heart. All the other many parts and functions had been added along the way to suit Poll’s evolving design. Now it was meant to be a steam engine, a water pump, a pressure boiler, a home-heating device, and of course, a work of art worthy of gracing the palace of the Prince Regent himself!

Cas wrinkled his brow. Just like many of Poll’s very worst ideas, it had all sounded most interesting at the time. Now Cas wondered how long this test run would take. He had pressing matters to attend to. “Well, it runs … sort of. As for actually
working…”

Poll rolled his eyes and raised his voice over the noise of the engine. “You still doubt me? Didn’t I get all of it down this alley after you said the cart wouldn’t fit?”

“And didn’t I get it fired up after you said the coal was too damp?”

“And isn’t it, right this very moment, running like a top?”

Once more, Cas gazed at the gusting, clanging—and, let’s be frank, hideous—creation. “I still think coal is a poor choice. It burns too hot. The steam pressure will—”

The Gilded Scarab by Anna Butler
The Wreck of the Mary Deare by Hammond Innes
My One Hundred Adventures by Polly Horvath
Sylvia's Farm by Sylvia Jorrin
Carnations in January by Clare Revell
The Mandarin Club by Gerald Felix Warburg
Blaze by Di Morrissey
King Cobra (Diamondbacks Motorcycle Club Book 3) by Glass, Evelyn
Zombie Society - They Live Among Us by K. Bartholomew
Deal Breaker by Harlan Coben
Our partner