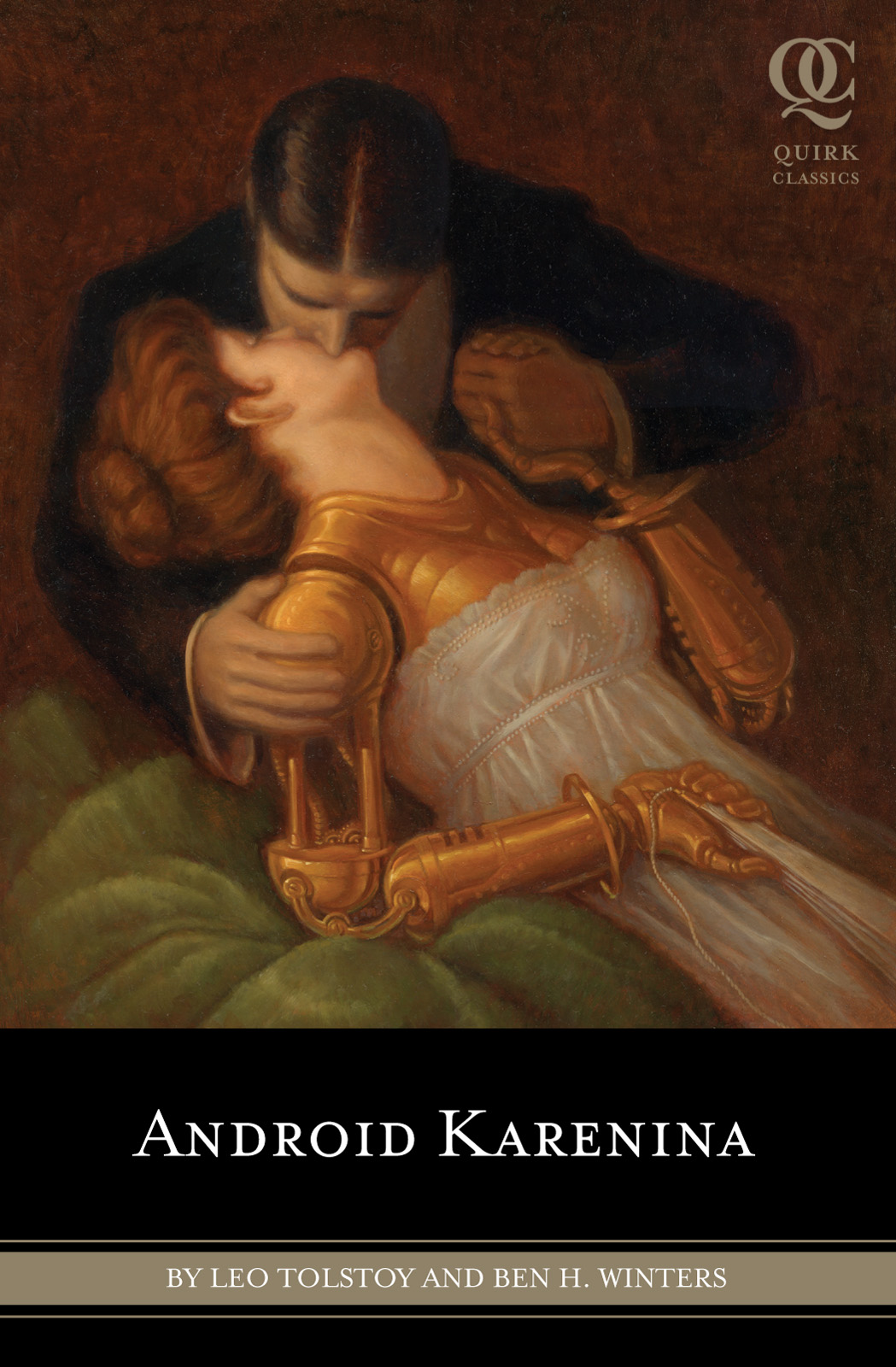 “Jane Austen isn’t for everyone. Neither are zombies. But combine
the two and the only question is, why didn’t anyone think of this
before? The judicious addition of flesh-eating undead to this otherwise
faithful reworking is just what Austen’s gem needed.”—
Wired

Sense and Sensibility and Sea Monsters
by Jane Austen and Ben H. Winters

“Quirk commissioned Ben H. Winters to punch up Jane
Austen’s
Sense and Sensibility
with man-eating beasts from
the briny deep. And once again, to the consternation of purists
everywhere, the result is sheer delight.”—
Onion A. V. Club

“The effect is strangely entertaining, like a Weird Al version
of an opera aria, and Eugene Smith’s amusing illustrations
add an extra touch of bizarre hilarity.”—
Library Journal

“A very funny idea, and there’s a pleasure in watching
someone be so silly with the kind of book generally
treated as sacrosanct.”—
Philadelphia Inquirer

“Now that’s my kind of love story! Bloody, gory, awkward,
and odd—kind of like it is in real life.”—
TheFrisky.com

TRANSLATED BY CONSTANCE GARNETT & THE II/ENGLISHRENDERER/94

Amidst all the skaters who hovered electromagnetically atop the tracks, Kitty was as easy to find as a rose among nettles

She shrouded the light in her eyes, but it shone against her will; the android, walking behind, glowed a regal indigo

“It’s time, it’s time,” he said, with a meaningful smile; his telescoping oculus zoomed in as he entered their bedroom

The quick-moving death machines fanned out, aiming their bomb-hurlers and echo-cannons at one another

“My God!” Vronsky shouted, at last noticing: “Anna! You are floating!”

“No!” he shrieked, and Anna felt her body slammed into the ceiling, pressure squeezing upon her throat

“A girl cannot be wed without the soothful presence of her Class III,” the prince had pleaded

Anna emerged in perambulating togs, her pale and lovely hand holding the handle of her dainty ladies’-size oxygen tank

Twitching, snarling, their massive reptilian heads bubbling with eyeballs, the aliens poured into the opera house

Knowing the direction this conversation would take, Android Karenina opened her arms and patted her lap for Lupo

“I will punish him, and I will escape from this hateful machine that I have become”

Quietly, invisibly, they would keep humanity’s flame burning until the Golden Hope could finally fly free

A NOTE ON NAMES

Russian names consist of three parts: the given name, the patronymic (derived from the father’s first name), and the family name. Often, individuals also go by a nickname. Hence the first character introduced is Stepan Arkadyich Oblonsky—Stepan is his given name, Arkadyich the patronymic, and Oblonsky the family name. But the man is often called “Stiva,” his nickname.

Class I and II robots also use a three-part nomenclature: a Roman numeral for class type, a function-designation, and an indication of model. Hence the I/Samovar/1(8) is a Class I device, designed to steep and serve tea, model number 1(8).

Class III robots are universally known by the nickname bestowed by their master or mistress.

VENGEANCE IS MINE;
I SHALL REPAY.

PART ONE: A CRACK IN THE SKY
CHAPTER 1

F
UNCTIONING ROBOTS
are all alike; every malfunctioning robot malfunctions in its own way.

Everything was in confusion in the Oblonskys’ house. The wife had discovered that the husband was carrying on an intrigue with the French girl who had been a
mécanicienne
in their family, charged with the maintenance of the household’s Class I and II robots. Stunned and horrified by such a discovery, the wife had announced to her husband that she could not go on living in the same house with him. This position of affairs had now lasted three days, and not only the husband and wife themselves, but all the robots in the household were terribly affected by it. The Class IIIs were keenly aware of their respective masters’ discomfort, and the Class IIs sensed in their rudimentary fashion that there was no logic in their being agglomerated together, and that any stray decoms, junkering in a shed at the Vladivostok R. P. F., had more in common with one another than they, the servomechanisms in the household of the Oblonskys.

The wife did not leave her own room; the husband had not been at home for three days. The II/Governess/D145, its instruction circuits pitifully mistuned, for three days taught the Oblonsky children in Armenian instead of French. The usually reliable II/Footman/C(c)43 loudly announced nonexistent visitors at all hours of the day and night. The children ran wild all over the house. A II/Coachman/47-T drove
a sledge directly through the heavy wood of the front doors, destroying a I/Hourprotector/14 that had been a prized possession of Oblonsky’s father.

Three days after the quarrel, Prince Stepan Arkadyich Oblonsky—Stiva, as he was called in the fashionable world—woke at eight o’clock in the morning, not in his wife’s bedroom, but within the oxygen-tempered Class I comfort unit in his study. He woke as usual to the clangorous
thumpthumpthump
of booted robot feet crushing through the snow, as a regiment of 77s tromped in lockstep along the avenues outside.

Our tireless protectors,
he thought pleasantly, and uttered a blessing over the Ministry as he turned over his stout, well-cared-for person, as though to sink into a long sleep again. He vigorously embraced the pillow on the other side and buried his face in it; but all at once he jumped up, banging his rotund forehead against the glass ceiling of the I/Comfort/6, and opened his eyes.

He suddenly remembered that he was not sleeping in his wife’s room, but in his study, and why: the smile vanished from his face, he knitted his brows.

Small Stiva, Stepan Arkadyich’s Class III companion robot, clomped happily into the room on his short piston-actuated legs, carrying his master’s boots and a telegram. Stiva, as yet unprepared to undertake the day’s obligations, bid his Class III come a bit closer, and then swiftly pressed three buttons below the rectangular screen centered in Small Stiva’s midsection. He sat back glumly in the I/Comfort/6, while every detail of his quarrel with his wife was displayed on Small Suva’s monitor, illuminating the hopelessness of Suva’s position and, worst of all, his own fault.

“Yes, she won’t forgive me, and she can’t forgive me,” Stepan Arkadyich moaned when the Memory ended. Small Stiva made a consoling chirp and piped,
“Now, master: She might forgive you.”

Stiva waved off the words of consolation. “The most awful thing about it is that it’s all my fault—all my fault, though I’m not to blame. That’s the point of the whole situation.”