Angel Crawford #2: Even White Trash Zombies Get the Blues 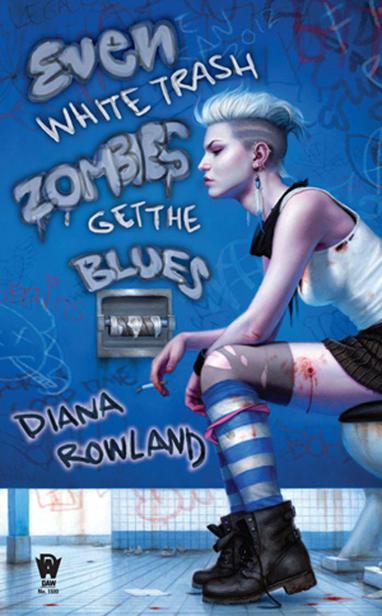 Raves for
My Life as a White Trash Zombie:

“For white-trash delinquent Angel Crawford, dying was the best thing that ever happened to her. Uber-talented Rowland takes a break from her ‘Demon’ series to produce a wonderful story with a zombie heroine who is endearing and engaging. This unique twist on a coming-of-age story explores a young woman’s journey toward self-acceptance in the face of long odds. Throw in the need for brains and a nasty serial killer and presto—you have the recipe for a terrific read!”

“An intriguing mystery and a hilarious mix of the horrific and mundane aspects of zombie life open a promising new series from Rowland….Humor and gore are balanced by surprisingly touching moments as Angel tries to turn her (un)life around.”

“Rowland’s delightful novel jumps genre lines with a little something for everyone—mystery, horror, humor, and even a smattering of romance. Not to be missed—all that’s required is a high tolerance for gray matter. For true zombiephiles, of course, that’s a no brainer.”

“Watching [Angel] grow while coming to terms with her new existence is a treat….Think Zombie Lite does chic-lit and you get the idea: simple good fun.”

“Every bit as fun and trashy as the brilliant cover. The story is gory and gorgeous with plenty of humor and a great new protagonist to root for. There is also a tightly written murder mystery too that shocked me by the end. No word yet on the next book in the
White Trash Zombie
series, but I’m already feeling the Hunger.”

“Blending very mild horror, humor and mystery, I was hooked from the start. Both urban fantasy and zombie fans will enjoy this highly entertaining novel. Full of suspense, drama, and several surprising twists, this is one zombie story I couldn’t get enough of.”

MY LIFE AS A WHITE TRASH ZOMBIE

EVEN WHITE TRASH ZOMBIES
GET THE BLUES

SECRETS OF THE DEMON

SINS OF THE DEMON

TOUCH OF THE DEMON
*

EVEN
WHITE TRASH
ZOMBIES
GET THE
BLUES

All characters and events in this book are fictitious.
All resemblance to persons living or dead is coincidental.

The scanning, uploading and distribution of this book via the Internet or any other means without the permission of the publisher is illegal, and punishable by law. Please purchase only authorized electronic editions, and do not participate in or encourage the electronic piracy of copyrighted materials. Your support of the author’s rights is appreciated.

PRINTED IN THE U.S.A.

For Cathy, who always knows how to brighten my day.

Huge heaping thanks, praise, and adoration go out to:

My fabulous husband, Jack, for being ten thousand kinds of awesome and for finding a cool and creepy factory for me to tromp around in for location research.

My sister, Sherry, for supporting me and teasing me as needed.

My daughter, Anna, for amazing hugs and kisses.

Steve Everly, for explaining the role of a probation officer.

Nina Lourie and Nicole Peeler, for daring to read and critique my rough drafts.

Matt Bialer and Lindsay Ribar, for helping me get to where I am now.

And, finally, for my incredible editor, Betsy Wollheim, and everyone else at DAW who has helped make these books a fantastic reality.

“So you hiding a body in here or sumthin’?”

The speaker gave a rasping chuckle as I pulled open the door of my storage unit, but behind his show of amusement was an avid curiosity that he was clearly desperate to satisfy. His question held a certain irony, considering that he fit the image of a serial killer a lot more than I did. Greasy black hair hung in lank tendrils from beneath a soiled Saints ball cap, his “Stor-This!” t-shirt with cut-off sleeves revealed slender arms with a surprising amount of muscle definition, and he apparently had the nervous habit of biting his nails—so severely that the tips of several fingers bore scabs.

On the other hand, I was the one who had a large chest freezer in a storage unit. Okay, yeah, so maybe that was a teensy bit suspicious. I could practically see the possibilities whirling behind his yellow-tinged eyes. Perhaps
I was hiding the body of a past boyfriend? Maybe a parent?
How about a too-nosy storage unit manager?

“Nah,” I replied with a friendly smile. “I won one of those grocery store shopping sprees and didn’t have any room back at my house to put a freezer. Didn’t want all the stuff I got to go to waste, y’know?” I flipped the lid of the freezer open so that he could see the contents. He peered in, hungry curiosity shifting to disappointment as he took in the sight of several dozen frozen dinners, various plastic containers, and a couple of slabs of ribs wrapped in plastic. Definitely no corpses. Even the ribs were obviously non-human in origin.

“Oh. Yeah, okay. Makes sense.” He straightened and stepped back as I placed two more plastic containers in the freezer.

“Made a big batch of soup yesterday,” I explained as the hunger nudged at me. It wanted what was in those containers, but I was trying hard to be super careful about not splurging. I knew I needed to ration my supply carefully. I had a nice surplus right now, however, I’d learned from hard experience not to depend on that. “I ran out of room in the fridge at home,” I continued, “so I figured I might as well put it out here for later on.” I closed the lid, made sure it was fully clasped. “Sorry, no bodies!” I said with a laugh.

His mouth twisted into an answering smile, but it was clear I’d ceased to be interesting now that he knew there was nothing mysterious to be found in storage unit number five-three-four. Good thing he had no idea that the contents of the freezer were far worse than a corpse.

He wandered back up to the office while I closed and locked the unit. There was nothing at all that said I had
to show him what was in my unit, but I knew damn well that if I hadn’t let him look he’d have probably broken in to satisfy his curiosity, and then I’d have run the risk that the contents of the freezer would be ruined.

The slabs of ribs were exactly what they appeared to be—and from pigs, not humans—but the soup and the frozen dinners contained my very prized stash of about three months’ worth of brains.

Hello, my name is Angel, and I’ll be your zombie today.

“I know I’m the one with the so-called iron stomach,” I said, “but even I think this is seriously disgusting.”

I was under the floor with my head and shoulders in a narrow service tunnel-type thing, just far enough to where I could barely peer around the corner where another tunnel intersected the one I was in. There was a corpse in the tunnel on the left. I couldn’t see a whole lot, but I could definitely smell it, even through the protective mask that kept me from choking on the grit and dust. So could everyone else.

“Flashlight?” I asked, reaching my hand blindly behind me. Someone shoved one into my hand, but the light only confirmed what my nose had tried to tell me. He was about ten feet down—bloated up and completely filling the tunnel. Considering that the tunnel was barely two feet across at best, I had to wonder what could have possessed him to try to squeeze through this
narrow space. One arm was extended over his head, and the other looked to be wedged tight by his side. A pool of reddish purge fluid extended several inches along the shaft—a disgusting reddish brown discharge from the mouth and nose. A shiver ran through me at the sight of his mangled fingertips and thin streaks of blood along the side of the shaft. He’d done his damnedest to claw his way out or shift position.
Did he suffocate or did he die of thirst?
God, I hoped it was the first.