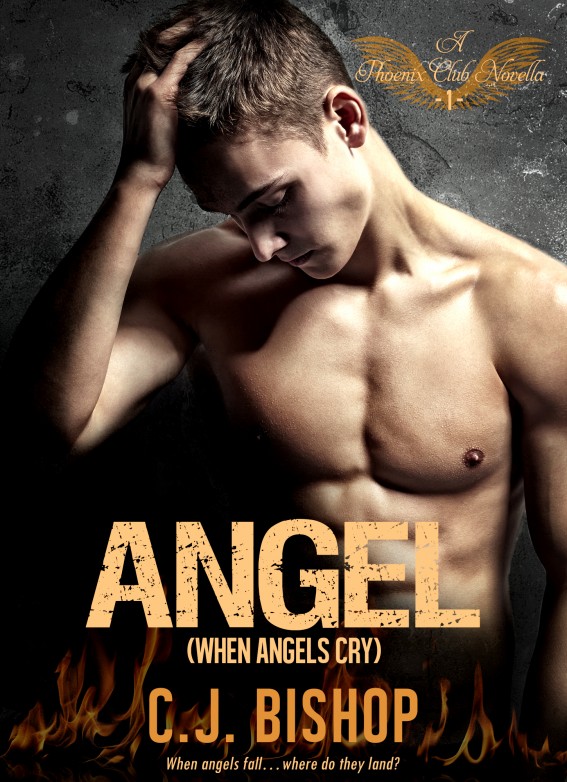 BOOK ONE: “When Angels
Cry”

All
Rights Reserved
. This book or any portion thereof may not be
reproduced or used in any manner whatsoever without the express
written permission of the publisher except for the use of brief
quotations in a book review. All characters appearing in this work
are fictitious. Any resemblance to real persons, living or dead is
purely coincidental.

For questions and comments about this book, please
contact us at
[email protected]Hearts.com

This ebook is licensed for your personal enjoyment
only. This ebook may not be re-sold or given away to other people.
If you would like to share this book with another person, please
purchase an additional copy for each recipient. If you’re reading
this book and did not purchase it, or it was not purchased for your
use only, then please return to
Smashwords.com
and
purchase your own copy. Thank you for respecting the hard work of
this author.

“That Ricky is a hell of an instructor.” Cole
grinned and glanced at Gabe as the two sat at one of the tables
before the stage. It was early in the day and only a few customers
were scattered through the club, most of which were just there for
a drink and mild entertainment.

“He’s certainly got an ass that won’t quit.”
Gabe observed with a slight nod of his head and quirk of his
eyebrows. Cole looked at him and Gabe grinned, “Ah, but not nearly
as sexy as your ass.”

“Mm-hmm.” Skepticism narrowed his eyes, a
smirk on his lips, as he turned his attention forward once more. At
twenty-two and with just a hint of Puerto Rican in his blood,
having come to them from a dance club in Southern California, Ricky
was a lovely image of naturally tanned fit body, short, nicely
trimmed black hair and eyes of midnight blue. He took hold of
Angel’s waist and turned him around in one smooth motion so the
boy’s back was against his chest, ass against crotch, then began to
move the younger man’s body in time with his own. His mouth was
close to his ear, whispering instructions. Angel gave an occasional
nod and followed through with whatever it was Ricky told him to
do.

Gabe adjusted his crotch and shifted in his
seat, then cleared his throat but said nothing as he continued to
watch the
lesson
. Chuckling low as he shot Gabe a quick
glance, Cole shook his head. “Jeans gettin’ tight, babe?”

Sitting straighter in his own chair, feeling
some pressure in his pants as well, Cole looked around the club.
“Where the hell is he?” he murmured. “This was supposed to be for
his benefit?”

“He probably got wind of it, and chose to
stay away.” Gabe said. “He isn’t going to come here and willingly
watch another of the boys rub all over Angel.”

“I know that.” Cole muttered. “That’s the
whole idea. He’s supposed to see it and
not
like it.”

“You are a devious one.” Gabe mused. “But
seriously, do you think he’s going to jump right in and offer to
take over?”

“That isn’t the point.” Cole said. “I just
want to get his goat.” He smiled wryly.

Twisting in his seat, Cole leaned his elbows
on the table. “For the past two weeks, since Angel showed up, Dane
has been fighting like hell to deny that he likes the kid…in that
hot, sweaty, let’s get jiggy kind of way.” He wriggled his eyebrows
and Gabe laughed. “So as his friend, it’s my duty to help him face
up to his fluffy feelings.”

“So you’re the self-appointed
enlightener
, huh?”

“Yup.” Cole grinned and turned back towards
the stage. “Mm. Damn.” A pleased smile stretched his lips as Ricky
had his hands on Angel’s hips, their bodies plastered together and
moving in a single sexual rhythmic motion. Angel grabbed the pole,
swaying against the metal bar as Ricky remained close up against
him, hips rocking, beautiful ass flexing as he released Angel and
reached around him, gripping the pole above his hands.

“Fuck.” Gabe groaned and adjusted his package
yet again.

Cole smiled; this was good for later. Gabe
would be hot as hell and begging to be fucked.

“They’re supposed to be
dancing
on stage–not
fucking
.”

Both Cole and Gabe jumped, startled by Dane’s
sudden appearance behind them. “Shit, man.” Gabe gasped. “Make some
fucking noise next time.”

Dane ignored him, eyes narrowed, hard, zeroed
in on the stage.

The two guys exchanged an amused look. Cole
tilted his head over the back of the chair and raised his eyes to
Dane’s face. “Ricky’s one hot little dancer, ain’t he?” He snapped
a quick look at Gabe then back to Dane. “Who better to teach Angel
the ropes?”

Cole smiled wryly, “Well, isn’t that the
idea? To simulate sex, get the customers all worked up so they’ll
shell out more cash?” Dane merely grunted but Cole caught the way
his dark eyes followed Angel’s every move–and the longing that
crept into those sable depths.

Just admit it, baby–you got it bad for the boy.

Try as he might, he couldn’t convince his
heart to calm, or his pulse to even out. He couldn’t account for
the sudden frustration and irritability that caused his hairline to
prickle and sizzle and hands to curl into fists as he watched the
scene on stage. With every shift of Ricky’s hands, rock of his
hips, and sway of his body against Angel’s–Dane had to resist, with
every ounce of will inside him, the urge to lunge up there and rip
Ricky off the boy.
And take his place
. He resisted the thought.
No, not take his
place
. So why was he getting so riled up watching it all?
This was nothing new, all the boys danced this way.

Angel hugged the pole, his head tilting back
over Ricky’s shoulder slowly, sensually, eyes half closed, a look
of ecstasy on his beautiful,
angelic
face.
It’s just part of the act, it turns the
customers on
. Even so, it caused a sudden tightness to
squeeze his chest. From his standpoint, Ricky was going too far,
affording much too much freedom to his hands.

“They’re only supposed to
simulate
sex.” Dane muttered
stiffly and turned away from the stage. “Not
actually
fuck. Ricky’s a
slut.”

“What do you care?” Cole smiled.

His nerves fraying, Dane hissed, “Fuck you
both.” And walked away.

“When and where, baby?” Cole tossed after
him, then chuckled, inciting Dane’s fists to clench tighter with
the urge to punch him in the mouth.

Angel’s gaze followed the man discreetly as
he weaved through the tables, walking stiffly towards the back of
the club. Ricky’s skin was hot and damp against his own, and the
way his body moved felt good, but as Dane disappeared into the
back, Angel found himself wishing he were the one giving the
lessons, pressed up tight against him with next to nothing covering
his obviously well-endowed features.

Though he hadn’t wanted to like the guy, the
moment he’d stepped into the club and saw him sitting at the bar,
Cole’s arms around him–he had felt himself slip. For the past two
weeks he’d been trying to tell himself to let it go, focus on his
agenda, and not get caught up in those beautiful dark eyes that he
was pretty sure only pretended
not
to want to look at him. From time to
time, he’d caught Dane watching him, but as soon as their eyes met,
the man was quick to turn away. He clearly wasn’t interested in
pursuing any attraction he might be harboring for Angel.

It’s just as well
, Angel thought, not without a
measure of wistfulness in his heart.
You’re not here to fall in love.

“Well, that was dumb.” Gabe sipped his drink
as the dance lesson continued on stage.

“Getting Dane pissed.” He smiled. “You’ve
seen what those fists can do. Not a bright idea poking at him that
way.”

Cole raised an eyebrow. “I wasn’t the only
one taking jabs.” He picked up his beer. “I believe he said fuck
you
both
.”

Shrugging, Gabe smirked, “Well you were the
one instigating it. If he’d decided to hit anyone, it would’ve been
you.”

“So what are you whining about?”

Gabe smiled. “Not whining. Just trying to
protect my…investment.” His eyes swept over Cole’s body and his
smile stretched into a sexy grin.

“And what have you invested in this?”

Licking his lips, Gabe set his drink on the
table and leaned forward on his elbows, voice lowering. “A whole
lot of bump and grind.”

“Fuck.” Cole laughed and shook his head.
“Can’t argue there.” He took another drink, his eyes flicking to
the club entrance as two young guys walked in, glanced around then
took a seat at the bar. They each ordered beers then twisted around
and watched Ricky and Angel.

Gabe followed his stare. “Know them?”

“Nope.” Cole downed the rest of his beer and
wiped his mouth, then winked at Gabe. “Should we give them a proper
welcome?”

Nodding, the two men stood up. The guys at
the bar cast them a quick, disinterested glance and returned their
attention to the stage. “They’re totally straight.” Gabe surmised
about half way to the bar.

“Did you see the way they looked right
through me, without a shred of interest?”

Gabe cocked a sharp eyebrow. “Even so, if a
man is gay, he at least gives me a once over and considers what it
would be like to fuck me.”

Chuckling low, Cole couldn’t deny the truth
of those words. He had yet to see a customer look past Gabe without
at least a momentary pause for admiration and a lustful thought or
two. That man was just fucking gorgeous, there was no getting
around it. And he was right–these two newcomers weren’t giving him
the time of day. That wasn’t even feasible if they were true blue
fags.

“I’ll prove it.” Gabe said low, though Cole
didn’t need proof, now that he thought about it. But he simply
nodded and let Gabe work his magic. Of course, Gabe was hot enough
to turn a straight guy queer, so he wasn’t sure if this would prove
anything or not. Still, it would be fun to watch.

Gabe sidled up between the two young men and
casually ordered a beer from Carl then leaned on his elbow and
faced the older of the two guys; nicely built, short cropped black
hair with an attractive, neatly trimmed scruff to his jaw and chin.
He shifted away from Gabe as he stared at the stage, but even then
he didn’t seem to be watching Ricky and Angel with a
sexual
interest.
Just…
interest
.

“I’m Gabe.” He was practically sitting in the
lap of the younger guy as he offered his hand to the other, eyes
heavy with invitation. “What’s your name, gorgeous?”

“Wade.” The guy said stiffly but didn’t
accept Gabe’s hand, or afford him more than a quick glance.

Tossing a quick look at Cole and raising his
eyebrows as if to say
‘See? Straight’
, he rested his hand on the guy’s
knee then slowly slid it up his thigh. “You know, we could grab us
a private booth and…” His hand slipped into the guy’s crotch and
gripped him as Gabe leaned in close to his ear and whispered
something Cole couldn’t hear, but could guess his words; he’d
whispered plenty of sweet, nasty nothings in Cole’s ear by now that
he wasn’t clueless.