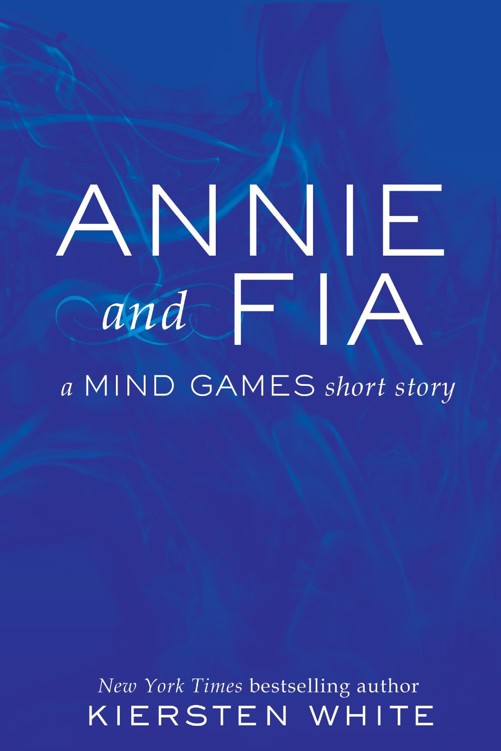 ANNIE: One Month Before Keane

ANNIE: One Year Before Keane

One Month Before Keane

The car bumps over uneven asphalt and I tug nervously on the hem of my skirt, picking at it until Fia grabs my hand and hisses at me to stop.

“Almost there,” Aunt Ellen says, as nervous as I am.

“Tell her to turn around,” Fia whispers. I elbow her in the stomach.

If I stay here, I will be forever cloaked in rumor and pathetic tragedy. Maybe I deserve that. I was never supposed to see anything. Maybe God made me blind on purpose. Seeing ruined everything, and there’s no way to get any of my life back. No way to get my parents back.

At least I have Fia. As long as I have her, that’s something. And I know she’ll never leave me.

“AND YOU’LL NEED A MATCHING SCARF!” EDEN
declares, draping one across Annie’s shoulders.

Annie laughs. “Actually, I don’t need matching anything. It doesn’t make a difference to me.”

“What are you even going to do while we’re there?” I mutter, staring at my empty duffel bag. Eden and Annie are packing like it’s a celebration, clothes strewn across Annie’s bed as Eden fusses over what she should bring.

I want to strangle her, I do, I want to crush her vocal cords because Eden keeps giggling like she can’t believe her luck.

I can believe mine: I have none.

“Oh, for the love,” Eden huffs, taking the scarf off Annie and folding it carefully into Annie’s bag. “Will you stop being the black hole of despair? We are going on a ski trip. To a fancy lodge. Who cares what we’re going to do? It’s a
ski trip
, Fia.”

“Actually, Clarice said they’re bringing in a companion instructor who will take me down the slopes. I guess we’ll use some sort of harness system? So I’ll actually get to ski!” Annie’s smile is both shy and brilliant at the same time, and it stabs right through black-hole me.

“That’s awesome.” I don’t have to smile for Annie, which is a relief. Eden glares at me, and I glare right back, giving off the deadest feelings I can. I know she feels them. She won’t admit it, not yet, but I’ve figured her out.

I’ve figured too much out. Too much, and yet I still know nothing. Except the way I feel all the time, like my skin is too tight, itching, iron bands around my lungs, and everything is wrong all the time. I don’t understand how Eden can’t feel it, feel how wrong this school is.

“Hey, it’s a full week away from classes.” Eden shrugs, gives me a peace offering of a smile. “That’s worth something, right? And maybe there will be boys! Oooh, Annie, what if your instructor is a guy? He’s going to be hot. He’s going to be so blisteringly hot you won’t even need a scarf! Maybe I’ll request a harness ride, too.”

Annie makes a face. “Yeah, because an old dude being into a fourteen-year-old girl is super attractive.”

“You’re almost fifteen, and I’ll be fourteen next month. Besides, I passed for sixteen all the time at home. You’ve never seen my ridiculous rack.”

I pretend to vomit into my duffel bag. So far, imaginary puke is the only thing I’ve packed. Annie laughs, relieved that I am part of this joking around. She always wants me to be part of things, to be involved, to be happy.

There is no room in my head for happy. Ever since we got to the school there’s been a swarm of bees in my head, and they buzz all the time, and they are angry and terrified. They only stop when I’m in the middle of training, when I finally let myself go and stop thinking, stop feeling, do nothing but what they want me to.

And then afterward, the wrong feelings come back so strong I throw up.

I pick things at random and throw them at my bed. The school provided us with snow gear, so all I need are clothes for the evenings. My fingers hesitate over a lacy black camisole tank that I wear underneath my terrible starched school uniform. I don’t need it.

But I need it.

Stupid, stupid. Whatever. I throw it into the bag, along with the push-up bra I know I don’t need but I need anyway.

Annie laughs at something Eden says, and unlike Eden’s stabby laugh, Annie’s fills me with a sudden desperate hope. Maybe this
will
be fun. Maybe away from the school the wrong feeling will stop and I’ll be able to breathe.

FIA STOMPS ACROSS THE FLOOR ABOVE US. SHE’S NOT
very big—it must take her a lot of effort to make that much noise. A door slams, and then, because it wasn’t loud enough the first time, she slams it again.

I am rubbing her toothbrush in soap tonight.

Heather sighs, pauses the movie. “Should I go talk to her?”

“No. She’s been a brat all day. She threw a fit like a baby when my parents were going out. She actually hid my dad’s keys.”

“Is it because she thinks you’re too old for a babysitter?”

“No, no, we like you.” I try to smile, but truth is, it’s starting to bug me that my parents hire a babysitter for us. I’m twelve, Fia’s ten. I can totally handle things.

Something crashes to the floor, and I’m pretty sure it was glass.

Well, usually I can handle Fia. She just gets so moody sometimes, and you can’t talk her out of it.

“Maybe we should—” Heather says, but then her voice disappears and

I don’t know what’s happening, and my brain feels like it’s going to explode, but I CAN SEE.

There’s so much light and so many colors that I want to close my eyes to process them, but I can’t. It’s like my body isn’t even here, just my eyes—my eyes that can
see
!

There are two people in front of me in strange seats, and we’re moving. A car! I’m in a car! How did I get in a car? I try to open my mouth to talk, but again I can’t do anything other than look.

The woman laughs and I realize she’s Mom. I remember now what she looks like! But she’s older, and smaller. That must mean the man is Dad, and he looks older and smaller, too, but handsomer than the snatches I remember from before I lost my sight.

I want to cry—I’m so confused and so happy and so overwhelmed—but I have no control.

Dad nods, and I can only see his profile as he stares straight ahead out the windshield. There’s something wrong with outside—not enough colors, everything white and fuzzy and moving. It makes me feel sick to watch it.

“We’ll have to ground Fia for hiding my keys.”

“And talk to her about dragging Annie into her little fits. Though I do feel bad we wouldn’t stay home for Fia but we’re heading right home when Annie was upset. Fia has to notice.”

Dad sighs. “We’ll be careful. I worry about—”

Dad jerks the wheel and everything is spinning around me as I stay in one place, and there is glass and screeching, piercing noise, and then the car tumbles and smashes around me and there is blood and . . .

No one is screaming anymore.

I open my eyes to the familiar embrace of utter darkness, and the screaming is back.

Heather shakes my shoulders and I realize
I
am the one screaming.

“What’s wrong with her?” Heather asks, her voice panicked.

“She’s never done this before!” Fia sounds even more worried. “Should I call nine-one-one?”

I take a deep, shuddering breath. My head feels like it’s going to burst. The memory of light makes my eyeballs ache, and the space behind them is a physical pain. “Mom and Dad! I saw them!”

“I’m going to call your parents,” Heather says. She walks out of the room and I can hear her speaking in hushed tones from the kitchen.

Fia takes my hands and pulls me close, stroking my hair the way I stroked hers when she was little and scared of the dark. “It’s okay,” she says. “It’s okay.”

I freeze. I know Fia’s voice better than my own, and I know the tone in it now. I’ve heard her use it on our parents hundreds of times. “Why are you lying to me?”

Heather sounds relieved when she walks back in. “I just talked to your parents. They’re fine. They’re going to head home early instead of going to a movie.”

“Yup! Totally fine. Why don’t we turn the TV back on and I’ll make some popcorn.”

My stomach turns and I think I’m going to be sick, but I try to breathe deeply. They’re fine. Heather talked to them.

“Maybe you fell asleep and dreamed it.”

“I don’t dream like that.” Until now, I didn’t even have an image for what my mom looks like. She’s only a voice in my dreams. I’ve been blind since I was
four
. I never see things.

Fia shifts uncomfortably, squirming next to me. “It’s going to be fine.”

An hour later I’m nearly asleep on the couch when someone knocks on our door.

“Can I help you, officer?” Heather asks, fear and confusion making her voice higher than normal.

“Is this the Rosen residence?”

“Yes. Is something wrong?”

And then our world ends.