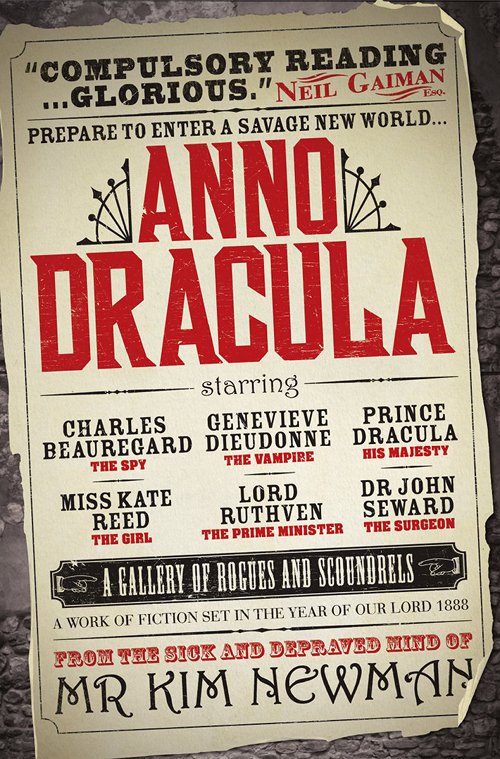 “Kim Newman’s
Anno Dracula
is back in print, and we must celebrate. It was the first mash-up of literature, history and vampires, and now, in a world in which vampires are everywhere, it’s still the best, and its bite is just as sharp. Compulsory reading, commentary, and mindgame: glorious.”

“
Anno Dracula
couldn’t be more fun if Bram Stoker had scripted it for Hammer. It’s a beautifully constructed Gothic epic that knocks almost every other vampire novel out for the count.”

“Bloody excellent. Kim Newman has exsanguinated the best of fact and fiction and created a vivid vampirous Victorian world uniquely his own. This clever, delicious extravaganza – Hammer Horror meets
True
(Blue)
Blood
– is just the tonic for the year of a Royal Wedding.” — Stephen Volk

“A
tour de force
which succeeds brilliantly.” —
The Times

“A marvellous marriage of political satire, melodramatic intrigue, gothic horror and alternative history. Not to be missed.” 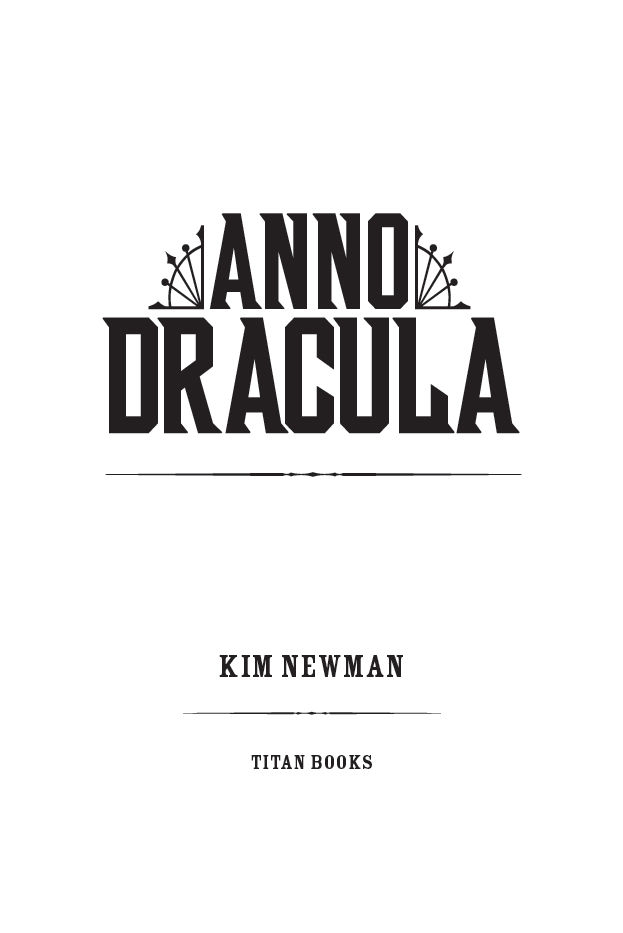 Kim Newman asserts the moral right to be identified as the author of this work.

What did you think of this book? We love to hear from our readers. Please email us at:
[email protected]
, or write to us at the above address.

To receive advance information, news, competitions, and exclusive Titan offers online, please register as a member by clicking the ‘sign up’ button on our website:
www.titanbooks.com

For Steve Jones, the Mammoth Bookkeeper of Vampires

8. The Mystery Of The Hansom Cab

10. Spiders In Their Webs

11. Matters Of No Importance

15. The House In Cleveland Street

25. A Walk In Whitechapel

31. The Raptures And Roses Of Vice

40. The Return Of The Hansom Cab

42. The Most Dangerous Game

49. Mating Habits Of The Common Vampire

51. In The Heart Of Darkness

57. The Home Life Of Our Own Dear Queen

Extracts from
Anno Dracula: The Movie

‘We Szekeleys have a right to be proud, for in our veins flows the blood of many brave races who fought as the lion fights, for lordship. Here, in the whirlpool of European races, the Ugric tribe bore down from Iceland and the fighting spirit which Thor and Wodin gave them, which their Berserkers displayed to such fell intent on the seaboards of Europe, ay, and of Asia and Africa too, till the peoples thought that the were-wolves themselves had come. Here, too, when they came, they fought the Huns, whose warlike fury had swept the earth like a living flame, till the dying peoples held that in their veins ran the blood of those old witches, who, expelled from Scythia had mated with the devils in the desert. Fools, fools! What devil or what witch was ever so great as Attila, whose blood is in these veins? Is it a wonder that we were a conquering race; that we were proud; that when the Magyar, the Lombard, the Avar, the Bulgar, or the Turk poured his thousands on our frontiers, we drove them back? Is it strange that when Arpad and his legions swept through the Hungarian fatherland, he found us here when he reached the frontier? And when the Hungarian flood swept eastward, the Szekeleys were claimed as kindred by the victorious Magyars, and to us for centuries was trusted the guarding of the frontier of Turkey-land; ay and more than that, endless duty of the frontier guard, for, as the Turks say, “water sleeps, and enemy is sleepless”. Who more gladly than we throughout the Four Nations received the “bloody sword”, or at its warlike call flocked quicker to the standard of the King? When was redeemed that great shame of my nation, the shame of Cassova, when the flags of the Wallach and the Magyar went down beneath the Crescent, who was it but one of my own race who as Voivode crossed the Danube and beat the Turk on his own ground? This was a Dracula indeed! Woe was it that his own unworthy brother, when he had fallen, sold his people to the
Turk and brought the shame of slavery upon them!... Again, when, after the battle of Mohacs, we threw off the Hungarian yoke, we of the Dracula blood were amongst their leaders, for our spirit would not brook that we were not free. Ah, young sir, the Szekeleys – and the Dracula as their heart’s blood, their brains and their swords – can boast a record that mushroom growths like the Hapsburgs and the Romanoffs can never reach. The warlike days are over. Blood is too precious a thing in these days of dishonourable peace; and the glories of the great races are as a tale that is told.’

‘I have studied, over and over again since they came into my hands, all the papers relating to this monster; and the more I have studied, the greater seems the necessity to utterly stamp him out. All through there are signs of his advance; not only of his power, but of his knowledge of it. As I learned, from the researches of my friend Arminius of Buda-Pesth, he was in life a most wonderful man. Soldier, statesman and alchemist – which latter was the highest development of the science-knowledge of his time. He had a mighty brain, a learning beyond compare, and a heart that knew no fear and no remorse. He dared even to attend the Scholomance, and there was no branch of knowledge of his time that he did not essay. Well, in him the brain powers survived the physical death; though it would seem that memory was not all complete. In some faculties of mind he has been, and is, only a child; but he is growing, and some things that were childish at the first are now of man’s stature. He is experimenting, and doing it well; and if it had not been that we have crossed his path he would be yet –
he may yet be if we fail
– the father or furtherer of a new order of beings, whose road must lead through Death, not Life.’

Last night’s delivery was easier than the others. Much easier than last week’s. Perhaps, with practice and patience, everything becomes easier. If never easy. Never... easy.

I am sorry: it is difficult to maintain an orderly mind and this marvellous apparatus is unforgiving. I cannot ink over hasty words or tear loose a spoiled page. The cylinder revolves, the needle etches, and my ramblings are graven for all time in merciless wax. Marvellous apparatuses, like miracle cures, are beset with unpredictable side-effects. In the twentieth century, new means of setting down human thought may precipitate an avalanche of worthless digression.
Brevis esse laboro,
as Horace would have it. I know how to present a case history. This will be of interest to posterity. For now, I work
in camera
and secrete the cylinders with what remain of my earlier accounts. As the situation stands, my life and liberty would be endangered were these journals exposed
to the public ear. One day, I should wish my motives and methods made known and clear.