Read Any Port in a Storm Online

Any Port in a Storm 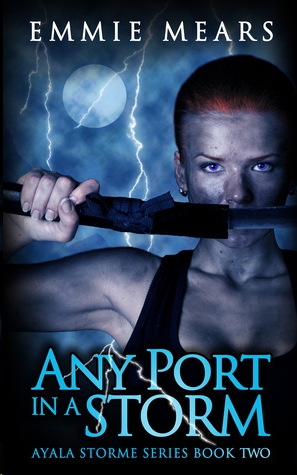 ANY PORT IN A STORM

ANY PORT IN A STORM

This book is a work of fiction. Names, characters, places, and incidents are either the product of the author's imagination or are used fictitiously, and any resemblance to actual persons, living or dead, business establishments, events, or locales is entirely coincidental.

All rights reserved. In accordance with the U.S. Copyright Act of 1976, the scanning, uploading, and electronic sharing of any part of this book without the permission of the publisher constitute unlawful piracy and theft of the author's intellectual property. If you would like to use material from the book (other than for review purposes), prior written permission must be obtained by contacting the author at [email protected]

Thank you for your support of the author's rights.

Published in the United States by Emmie Mears

For those who feel as though there is no place for them,

For those who struggle to find purpose,

For those who lose their way,

May you find these things.

I don't know if I'll ever get used to butts all over my apartment.

They're all very nice butts — shades get the best of both hellkin and human gene pools — but that's sort of beside the point. There are butts all over my apartment yet again, and it's just another Thursday night of me having no idea where to look. The butts are bad enough, never mind the other side.

Even more annoying, it's a full moon tonight, and shades are too literal to even laugh at my jokes.

These days, I miss him the same way I miss Roger, the frog I stashed in my room for three weeks when I was a knobbly-kneed Mediator-in-Training. Roger got found out, then thrown out into the pond.

Is that awful? That I miss Mason like that? He wasn't a pet; he was a person. And he isn't really past tense at all — not in general. He's alive and well and somewhere covered in sand in the Middle East. Probably pissing off the locals and eating whole goats.

But he's past tense for me.

my living room, my eyes seek out a tattooed shoulder. The tattoo itself is part of that whole "shades are literal" thing. It's Saturn's shoulder I'm searching for, and the ink is exactly what you might expect it to be, the rings of the planet rippling over his muscles when he moves.

I see Carrick, my roommate who I guess is pretty enough to kiss but mostly I want to kick. I see Rade and Hanu and Jax.

It's really sad I know most of these shades by their butts alone. Ugh.

Frowning, I make my way through the crowded room.

Saturn said he had something to discuss with me, and at three in the morning on a work night, I don't really want to go wandering through Forest Hills to look for him.

He always sticks close to the place he first drew breath, Saturn. I saw him take that first gasp of air.

It's not as romantic as it sounds. That first breath came because his full-grown body exploded out of a woman half his size. Lena Saturn. Back when I thought she could be saved.

Jax touches my shoulder when I pass, his brown hand as callused as mine. I return the gesture. His mother was a man called Jack, and I think the
x
is Jax's way of making himself a possessive. I've yet to meet a shade whose name wasn't in some way traceable to his mother. The shades call all their hosts mothers, whether they were spawned from a male body or female body or anywhere in between. The ones who gave them life at the expense of their own.

Ain't nobody living through that.

Rade and Hanu touch my shoulders as I pass them as well, followed by the the others, who stop what they're doing and reach out to me until my shoulders feel kissed by ghosts. I make sure to return each touch, meeting indigo eyes as I walk. My body never brushes their skin as I move among them. Only their fingertips make contact with me, and only mine make contact with them.

Shade culture. They're creatures of extreme violence. A gentle touch has evolved into how they say
you're safe
. That they expect the same in return from me, well. I don't know if I should be flattered or frightened.

Then again, I am also a creature of extreme violence.

Carrick finishes talking to Miles. Carrick is a white man with long hair the color of walnut wood. He's naked as a jaybird and looks even paler next to Miles, who is black with shoulder-length, delicate locs that swish when he moves. Where Carrick is a volcano with long periods of dormancy punctuated by explosions, Miles is steady like the Colorado River. Sometimes I think when the world ends, in the quiet moments when every other being is finally dead, Miles will be the only one left standing, a canyon carved away around him.

I walk among titans these days. Lordy. All except the damn one I want.

I should expect Carrick's diffident little shrugs right now, but they still make my toes itch to make contact with his shins. Instead, I gesture at him, impatient.

"You know me too well," Carrick says. His English accent still sounds disingenuous coming from the mouth of a shade, its lilt ever-so-slightly off even to someone used to the speech of Londoners.

That's probably because his speech is held over from the seventeenth century, and no, I'm not used to that thought yet. He looks like he's in his mid-thirties. He only acts like he's twelve.

I wait, looking back and forth between Carrick and Miles. Miles, of course, is unmoved. I do see a crinkle at the corner of his eye where he's hidden away a smile, though, and the sight steels me to keep my deadpan look for Carrick. After a long pause with only the murmurs of the other shades and the clinking of Nana the Bunny in her cage in the background, Carrick scowls at me.

Fuck. I just got home. I don't want to leave again.

I look at the clock over my TV. Three seventeen. If I leave now, I might catch Saturn in time to get a whopping five hours of sleep. I make a pit stop to give Nana's head a scratch and feed her a carrot, her rose-dusty fur as soft as down. When I make my way back through my living room, Hanu and Jax give me a nod goodbye. Miles watches me with indigo eyes that almost glow. His gaze falls on my shoulder, then flickers to the back of Carrick's head. It's not until I'm out the door that I understand why.

Forest Hills always makes me jumpy. I blame it on the fact that I took down two slummoths and a jeeling here a few months ago. By "took down," I mean I limped away from that fight with a palm sliced almost clean through, a festering, demon-poisoned bite on my shoulder, pulled muscles, and a heart that only just was still beating on the right side of my ribcage.

By now, I know where to look for Saturn, and I tread carefully through the underbrush, the sycamores and oaks forming a cathedral in the night above, stars shining like stained glass. More important than the scenery though is the soundtrack. Even in early autumn, the crickets play their little songs, their rhythms syncopated and bright in the darkness.

Their sound is safety.

Norms ain't the only ones who hate hellkin — and fear them.

Saturn sleeps in the trees. He doesn't seem to mind gnarly bark digging into his nether bits, so I never pester him about it. Most of the other shades have some sort of shelter, but he likes it here. There's a tall oak across the clearing he tends to occupy, but even though it's dark and the yellow-orange leaves — dark grey in the night — obscure the trunk enough to hide him, the pit in my gut says he's not there.

The night is muggy and clammy in the way only southern nights can be, and the prickle that dances along the skin of my forearms has less to do with that and more to do with the way the crickets have quieted.

It's not that they've stopped — it's like someone's been gradually turning the volume knob downward until I'm not sure if it's me or my surroundings that's changed.

Except I know better.

My shoulder gives a twitch, as if it can remember that demon's teeth too well.

Slowly, I unsheathe my swords. One long and curved like Saturn's rings, one short and stabby.

I listen to the now-distant hum of the crickets, the rustle of the trees. A good stealthy person learns to move with the wind, to let the earth disguise her footsteps.

Demons, thankfully, get an F in stealth.

So why am I now surrounded by silence?

It crawls onward through the night, creeping outward, dulling my senses.

A crash of branches would be welcome.

Slowly, I swivel, turning on a full 360 degrees until I'm sure even the dim stars and sliver of setting moon have shown that I'm alone in the clearing.

A single harkast demon scampers out of a bush. Or rather, scampers about well as anything with legs that short can. Stumpy is the best word to describe these things. My blades stop the hellkin beastie before it takes three steps into the clearing, and then it's dead. A moment later, I hear a chirp of a cricket. No more demons, so why is my spider-sense still going off?