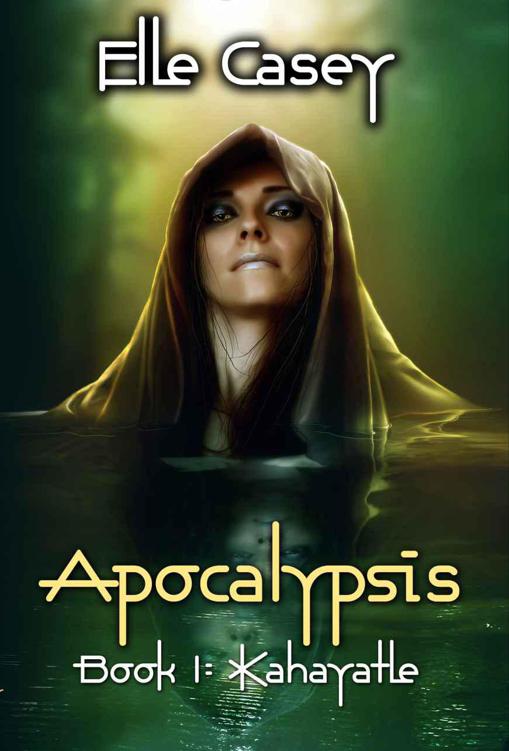 To Aidan “The Executioner” Brindley

Superfan Extraordinaire from Down Under

If you did not pay for this ebook or receive it via a free, author-authorized promotion on Amazon, you are in violation of this copyright, and the author respectfully asks that you please support artistic expression and help promote anti-piracy efforts by buying a copy of this ebook at www.Amazon.com or at the Amazon outlet that serves your country.

Elle Casey thanks you deeply for your understanding and support.

I stuffed the sleeping bag down into my backpack with angry, punching motions, sick and tired of having to be here and having to do the same thing over and over again.

I hated camping, I hated being organized, and more than anything, I hated what this exercise stood for.

I told you - you have to conserve the room as best you can.

You have to travel as efficiently as possible.

Take it out and start over.”

“I don’t see what difference it makes.”

“Trust me, it’s going to be a really big deal to you in the not so distant future.”

I was being ornery.

I knew the answer to the question already.

Look around, would you?”

“Stop defaulting back to the rebellious young teen act, and get serious.

We don’t have enough time to play those games anymore.”

I
am
a teenager.

I don’t care what the news jerks and the government say.”

I threw my backpack down on the ground.

“And it’s not rebellious to not want to play friggin’ survivor in the backyard every day.”

My dad looked at me with a sad expression and sighed, reaching over to pull me into a tight hug.

He dropped his nose to my head and inhaled deeply.

My face was pressed up against his shirt, and I could smell his sweat mixed with the sweet scent of his aftershave.

My dad always said he was the last of a dying breed, using that stuff.

He couldn’t have been more right.

I said it just to hear the words, but I knew it was only wishful thinking.

I could tell he was getting choked up again when he started talking, his voice now hoarse.

“I wish, more than anything else in this world, that you didn’t have to be standing here with me in this backyard playing survivor.”

His whole body started to shake with silent sobs.

If I could do
anything
to change this, anything at all, I would.

I swear to God I would.

No one can stop it.”

I put my arms around his waist, letting go of my earlier stubborn anger,

now choking back my own tears.

“Yes, you did,” he said, sniffing hard and clearing his throat, shifting to hold me at arm’s length.

He was staring at me while he smiled through his tears, giving me
that look
.

The one that always made me confess.

“Okay, so maybe I did mean it.

But I’ll shut up about it for a little while.”

“Not for too long, though.

You wouldn’t be my daughter if you weren’t complaining about something.”

I tried to slap him playfully but he moved too fast for me.

My dad is light on his feet, an expert level-one practitioner of krav maga - a certified badass.

He’d only recently taken up camping.

“Pick it up,” he ordered, now back in control of his emotions.

Only this time, get the air out of that bag first, condense it down …”

I cut him off.

“I know, I know … ‘down into the smallest footprint possible.’

I shook the sleeping bag out and started rolling it up quickly, using the moves I’d been practicing for four months straight to squeeze it down into a lump the size of a small loaf of bread.

I folded the whole thing in half, pushed it to the bottom of the backpack, and then let it unfold itself one time, before putting the other items in on top of it: unbreakable water bottle, half-liter of bleach, square of plastic, cup, hunting knife, and various other tools my father was quite certain I would need … once all the adults in the world had died off, leaving us kids alone to fend for ourselves.

I HAD EATEN ALL THE rations that were left in my house, except for five cans of baked beans and two bags of noodles.

It’s all I’d been eating for a week, and if I had to have another bite of starch I was going to puke.

I didn’t like the idea of going through my neighbors’ houses to find food, but the choice was being made for me now.

Morning would be the best time for me to make my move.

I’d heard the sounds of other people - teens like me - moving around in the daytime; but usually it was in the afternoon or at night.

Groups of them had gotten together, looking for stuff in the houses that didn’t have kids in them.

None of the houses had adults in them anymore.

I needed to move without being seen.

Leaving my house unprotected would be a very bad idea.

I knew that these gangs were soon going to stop showing respect to the houses with kids in them like me.

It was only a matter of time before the resources left in these neighborhoods dwindled down to an amount so small, it would no longer be enough to support the number of growling stomachs that roamed the streets; not without the hungry breaking into the occupied places too.

I hadn’t heard them hit the house behind me yet, maybe because there was someone living there.

I’d never met that neighbor, though, and had never seen any sign of a kid there.

There were two other houses on my street that used to have kids my age in them, but they had left - I assume to join one of the roving gangs.

I guess they figured they had better chances of surviving in a group.

I didn’t feel that way at all.

before the world had gone into the crapper, I’d been pretty much a loner anyway.

I liked my music and my books and didn’t bother with after-school clubs or hanging out at the local cafe.

Besides, my dad had me in martial arts training every weekday and most weekends, practically my whole life; it didn’t leave much time for socializing.

I’d only moved to this town six months before my dad was suddenly gone.

He’d hoped to outrun the apocalypse, but it eventually caught up with him like it did anyone who wasn’t going through puberty.

The guys I trained with at various dojos over the years - I was always the only girl - were as serious as my dad about their skills.

They lived for the feel of total control and absolute domination, in any situation.

I appreciated the power, but it was never really my thing.

I did it to make my dad happy.

I’d advanced through the ranks, but didn’t get as far as he’d wanted me to.

Now he wasn’t here to help me move forward, and I wished like hell I’d tried harder.

For him and for me.

I decided to go to the house behind me to search for food.

It was worth checking out, at least.

I could get there by climbing my backyard fence, and no one who might be out on the street would be able to see me.

Up until now, no one had bothered to try and come into my house.

I’d put a note on my door that said to stay the hell away and that I had a gun - which was the truth.

But in doing that, I’d essentially become a sitting duck.

Eventually, they would come for the things they hoped were in my house - food and fresh water.

It was going to be time to leave soon.

But until that day came, I needed something else to eat.

My hunger was gnawing a hole in my stomach.

Two more hours and I’d go over the fence.

My hand went nervously to the ring on a chain that hung at my neck - my dad’s old wedding ring that he’d given me just before he went away for good.

I walked out into my backyard and closed the door behind me softly.

An earlier check of the street in front of my house said it was empty.

I’d stayed hidden in my bushes for five full minutes, just to be sure no one was lying low, scoping me out.

Five in the morning was apparently still too early for the raiders; it was nice to know that habit hadn’t yet changed.

Once I was sure I wasn’t being watched here in the backyard either, I went to the fence that separated my yard from the mystery neighbor’s place.

I peered over the top, my face hidden by high bushes on their side.

I could see the back of their house, no movement coming from within.

I used the horizontal board that was about two feet off the ground, holding the vertical fence parts together, as leverage.

One foot there gave me the little bit of lift I needed to get my other leg over the top.

I used my abs and strong arm muscles to pull myself the rest of the way over.

It wasn’t pretty, but it did the job, landing me on the ground behind the bushes.

I stayed there for a couple of minutes, calming myself and checking for any signs of having been seen.

There was nothing - still no movement from the windows at the back of the house.

I slowly crept from the bushes to the back door, checking the handle to see if it was unlocked.

I shook my head at all the people who’d locked their doors to die inside.

I hoped these neighbors had done the better thing, and gone to the hospital to do that bit of nasty business, like my dad had.

I was grateful for his final gesture, even though at the time it was the worst day of my life, watching him drive away like that and leave me all by myself.

I don’t think I could have buried him in the backyard.

That would have been too much, and like he had said, I wouldn’t have been able to leave him behind when it was time to go.

He wanted me to be mobile and flexible - memories shouldn’t be tying me down to a sinking ship, he’d said.

I wrapped the hand towel I’d brought with me around my fist and punched the glass panel nearest the door handle to break it, reaching through the hole I’d made to unlock the deadbolt.

I opened the door slowly and stepped inside.

I left the door open, tiptoeing through the back hall and into the kitchen.

I don’t know why I was trying to be so quiet.

I guess knowing I was breaking into someone’s house made me feel like I should sneak.