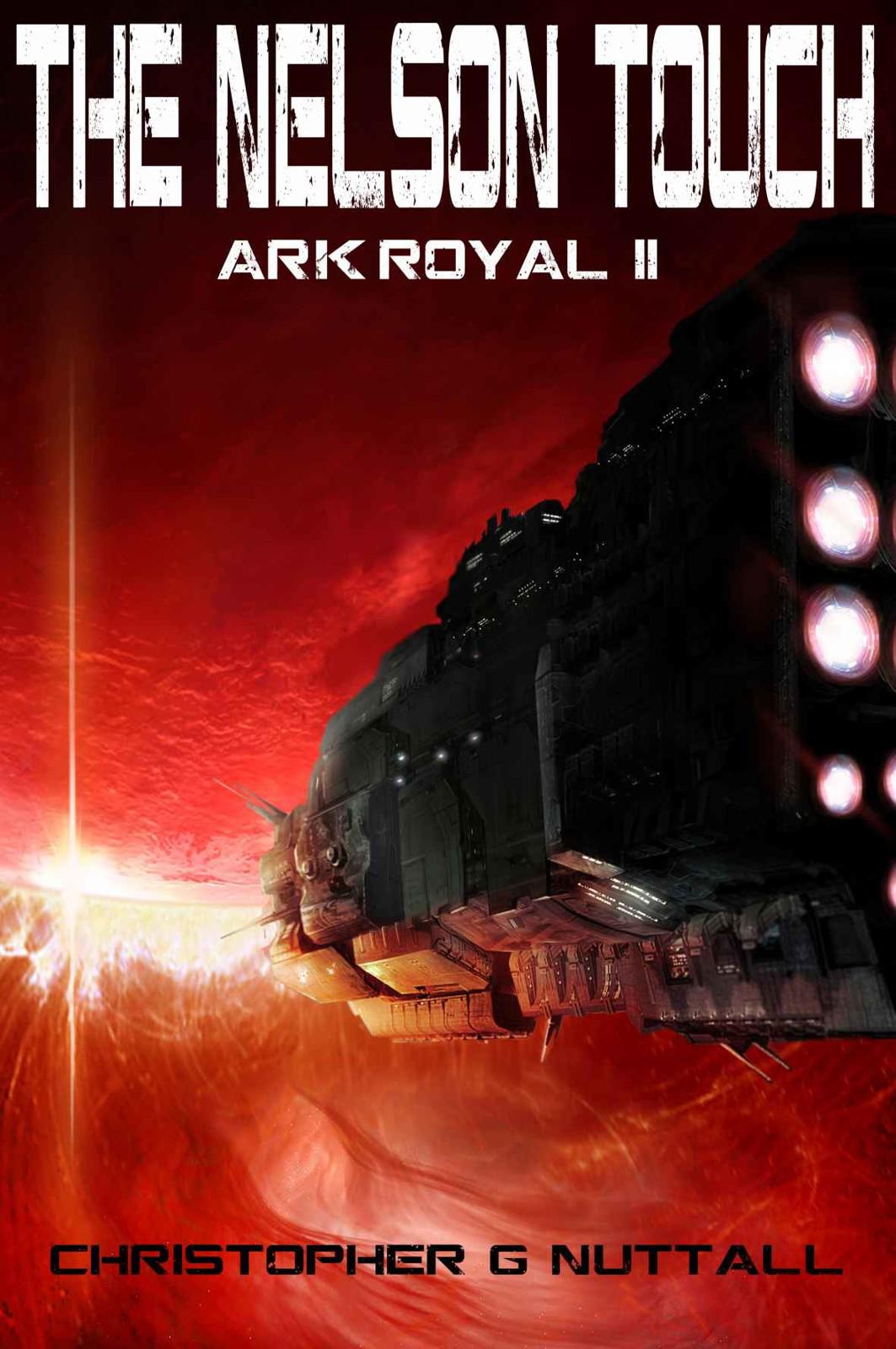 Ark Royal
– the Royal Navy’s outdated space carrier – has won a smashing victory against the enigmatic aliens, capturing one of their starships and returning to Earth.  Now, Admiral Theodore Smith and his crew are assigned to command a fleet charged with making a deep-penetration raid into alien territory, a fleet made up of carriers from four different nations.

But with a crewman who isn't what he seems, untested pilots and international friction – and a new and dangerous alien plan - can Ted and his crew survive their mission ... or will they die, alone and unremarked, hundreds of light years from home?

To everyone who emailed me and asked for Book II.

The Nelson Touch
is Book II in the
Ark Royal
series, following on from
Ark Royal
.  A free sample of Book I can be downloaded from my website (www.chrishanger.net) and then purchased from Amazon.

If you liked this book, feel free to join my facebook page, discussion forum or simply drop me an email.

It has been eleven months since the attack on Vera Cruz both introduced the human race to the existence of aliens and started the First Interstellar War.  Since then, we have learned a great deal about our enemy and how he responds to our weapons and tactics.  In particular, the capture of an alien battlecruiser by
Ark Royal
was very helpful.

Most of my study group’s recommendations are included in the detailed report, but there are certain issues I wished to bring to your attention personally.  In particular, I must caution you against assuming anything about our foe.  We are still faced with an enigma wrapped in a mystery wrapped in a riddle; we know nothing about his internal command structure, internal politics or – most importantly of all – just why he chose to start the war.  Our attempts to crack the captured computer system have yielded no data that might allow us to build up a picture of how our foe thinks.  All we have are deductions from his actions.

They clearly took some time to study us and gear their forces to take advantages of our weaknesses.  The plasma cannon system alone devastated our formations, allowing them to score a major victory over New Russia that came alarmingly close to shortening the war.  If we hadn't possessed
Ark Royal
, with armour that made her largely immune to alien weapons, we might well have lost the war within six months.  However, we still lack any insights as to why they actually started the war in the first place.

My team has speculated wildly, using human history as a baseline.  Their government may well be expansionist, bent on conquering or exterminating all other forms of intelligent life.   Or they may view us as a potential threat and see advantages in curbing our own expansion.  Or they may believe that
we
started the war.  The discovery of artefacts from the long-lost
Heinlein
on Alien-1 raises a number of uncomfortable questions.  Did the Heinlein Colony mission accidentally start a war with the aliens?

But all of this leads to yet another mystery.  Why don’t they
talk
to us?  They have not even attempted to demand unconditional surrender, even though it could shorten the war, let alone open up diplomatic channels.  And, so far, every attempt to establish communications with the aliens has ended in failure.

We accept that the aliens have physical problems speaking in human tongues; indeed, that we will have similar problems in trying to pronounce their words.  However, given their obvious skill at technology, it is unlikely that they have any real problems producing equipment that will allow them to bridge the gap.  For that matter, we have no difficulty in doing the same – and yet the alien POWs steadfastly refuse to talk to us.  I have had to dismiss two operatives from the research team for allowing their frustration to impede their professionalism.

In short, we have no way of ending this war, save by outright victory.

Towards that end, sir, I have a few suggestions ...

Admiral Sir Theodore Smith jerked awake in the shuttle’s uncomfortable seat.  Lieutenant Janelle Lopez, his Flag Lieutenant, was looking down at him, an expression of worry crossing her beautiful dark face.  Ted couldn't tell if she was worried about him or the effects on her career of awakening her Admiral from an unsound sleep, but it hardly mattered.  A glance out the porthole showed their destination coming into view.

“I’m awake,” he said, crossly.  His mouth felt like sandpaper and he swallowed, hard.  There were water supplies on the shuttle, but he hadn't bothered to take a drink since they’d departed from Nelson Base.  “Were there any further updates?”

Janelle shook her head, pushing her hair back into her ponytail.  She looked absurdly young for her position, but Ted had insisted on having her assigned to him as a reward for believing in
Ark Royal
when the Old Lady had been nothing more than a drifting hulk orbiting Earth, nothing more than a reserve for officers and crew the Royal Navy couldn't be bothered to discharge.  Now, with
Ark Royal
the most important ship in the fleet, the competition for postings to her – and her Admiral’s flag staff – was intense.  But Ted was determined that those who had shown faith would have first choice of slots behind her massive sheets of armour.

He smiled at her tiredly, then turned to peer out of the porthole.
Ark Royal
was lit up from prow to stern, shining out in the inky darkness of space like a beacon of hope.  She was ugly – even her fiercest defenders would never call her beautiful – yet there was a quiet elegance to her stubby lines that caught his eye and fired his imagination.  As they came closer, he saw the makeshift sensor blisters, point defence cannons and missile tubes mounted on her hull, ready to defend her from all enemies.  It was ironic, he knew, that the Old Lady had once been considered obsolete.  But with alien starfighters armed with plasma cannons out there, hunting for targets, the only real defence was layers of solid-state armour.  The loss of twelve modern carriers in the First Battle of New Russia had proved that beyond a shadow of a doubt.

“Preparing to land,” the pilot called from the cockpit.  “I believe they’re putting together a ceremony for you, sir.”

Ted groaned, so quietly that only Janelle heard him.  Ceremonies were a very important part of the Royal Navy’s traditions, but they hadn't featured in his life until
Ark Royal
had received a new lease on life.  Since his promotion to Admiral, he’d been forced to endure more ceremonies, speeches and formal dinners than he'd had to attend in his entire life, prior to the war.  The thought of returning to the Old Lady with such elaborate formality seemed absurd.  And yet he knew there was no choice.
Ark Royal
was no longer his command, even though he was her Admiral.  He would be a guest on the ship he still considered to be his own.

He leaned back in his seat as the shuttle entered the landing bay and settled down on the deck.  A faint queasiness ran through his body as the shuttle’s gravity field slowly merged with the carrier’s own gravity field.  Bracing himself, he stood and started to walk towards the hatch.  Outside, he knew, the landing bay would already be closed, with a breathable atmosphere being pumped into the massive compartment.  It was a necessity for the Royal Navy’s ceremonies.

Wouldn't do to have the Admiralty step out into cold vacuum
, he thought, snidely.
And until someone invents a forcefield to keep the atmosphere inside the ship, that’s precisely what they would do if they didn't wait to repressurise the bay
.

He sucked in a breath as he caught sight of his own reflection.  Somewhere along the way, he’d picked up more than a few white hairs, although his body was as healthy as years of naval food and a forced program of exercise could make it.  The perfectly-tailored Admiral’s uniform still seemed odd on him, after being a starship commander for so long.  His blue eyes looked tired, but bright.  The thought of returning to action was galvanising in a way endless meetings could never be.

There was a faint
ding
from the airlock controller as it registered the presence of a breathable atmosphere outside, but there was a long pause before it opened.  Ted had to fight down the urge to open the airlock himself and step out into the starship, even though he knew it would ruin the ceremony.  It would be petty and childish, but part of him just wanted to set foot on
Ark Royal
again, even though she was no longer
his
command.

The airlock clicked, then hissed open.  Ted took a breath, tasting the indefinable mixture of elements that made up the old carrier’s atmosphere, then stepped out onto the deck.  Outside, the landing bay looked shinier than he remembered, suggesting that Captain Fitzwilliam had made good use of the legions of technicians assigned to
Ark Royal
in the wake of their return to Earth.  He paused, long enough to salute the Union Jack painted on the far bulkhead, then turned to meet his former XO and current Flag Captain, Captain James Fitzwilliam.

“Thank you, James,” Ted said, and meant it.  The first time they’d met, Captain Fitzwilliam – a young aristocratic officer – had tried to take command of the carrier out from under Ted’s nose.  Instead, he’d wound up serving as Ted’s XO as
Ark Royal
went to war.  After a somewhat bumpy start, they’d wound up trusting one another ... and Fitzwilliam had saved both Ted’s life and career.  “It’s good to be back.”

“This is my XO, Commander Amelia Williams,” Fitzwilliam said, nodding to a tall redheaded woman with a stern, almost patrician face.  “She joined us from
Victorious
.”

Ted nodded, keeping his expression blank.  He’d argued that Commander Keith Farley, his former tactical officer, should be moved up into the XO slot, but the Admiralty had disagreed.  With the new push to construct armoured carriers and battleships that might be able to stand up to the aliens in combat, they wanted as many officers as possible to develop experience with the old-new starships.  He had nothing personal against Commander Williams, but seeing her in place was a reminder that he hadn't won all of the political battles.

Colin and the Magic Bookmark by Merv Lambert
The Knight's Tale by Jonathan Moeller
WWW 3: Wonder by Robert J Sawyer
Arabella by Georgette Heyer
Simply Love by Mary Balogh
THE CLEARING by Boland, Shalini
I Hope You Dance by Moran, Beth
The CEO Gets Her Man by Ashby, Anne
Tale of the Dead Town by Hideyuki Kikuchi
Look Evelyn, Duck Dynasty Wiper Blades. We Should Get Them.: A Collection Of New Essays by David Thorne
Our partner