Read As Black as Ebony Online

As Black as Ebony 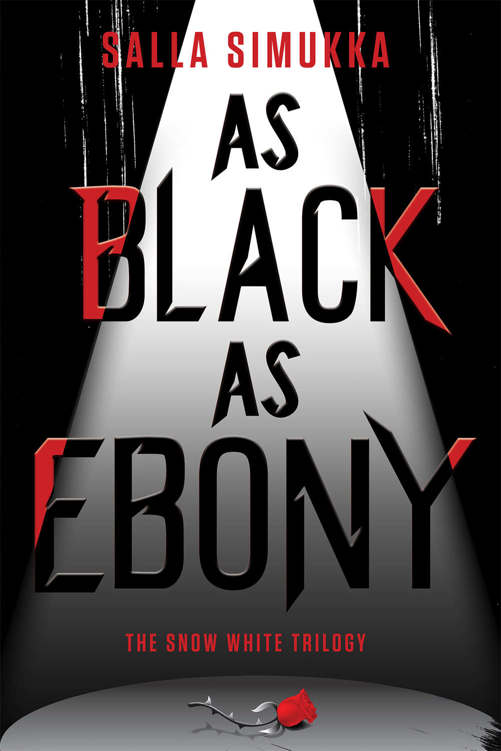 Praise for
As Red As Blood
by Salla Simukka

“Limned in stark red, white, and black, this cold, delicate snowflake of a tale sparkles with icy magic.”

“Simukka creates a tough, self-sufficient heroine in 17-year-old Lumikki Andersson in this first book in the Snow White Trilogy . . . Fans of Nesbø and Larsson won’t be disappointed.”

“[A] YA novel in the tradition of Nordic noir—edgy crime novels set in frigid lands.”

“A compelling start, a strong female character, the rich background setting of Finland, and a hint of a Snow White retelling are highlights of this work.”

“The Arctic setting of this import is used to full advantage, evoking a chilling mood and strewing genuine frigid weather obstacles in Lumikki’s way . . . The first entry in Simukka’s Snow White trilogy will tempt mystery readers back for more.”

—
The Bulletin of the Center for Children’s Books

As Red as Blood

As White as Snow

Amazon, the Amazon logo, and Skyscape are trademarks of
Amazon.com
, Inc., or its affiliates.

I’ve been watching you.

I know everything about you.

Lumikki awoke to a gaze.

A gaze aglow with warmth. It was hot, burning her skin and mind. The eyes were as familiar to Lumikki as her own. Light blue, the hue of ice and water and sky and light. Right now the eyes were smiling, although the gaze was steady and firm. A hand rose to stroke her hair and then continued in a light caress along the edge of her cheek to her neck. Lumikki felt a shudder of desire first in her belly and then below. Its grasp was so strong that she wasn’t sure whether it felt dizzyingly good or agonizingly painful. She was ready in a heartbeat. Blaze could have done anything to her. She was open to everything, absolutely everything. She trusted Blaze and knew that whatever he did would bring pure pleasure. They made each other feel good because they only wanted the best for each other. Nothing less would do.

Blaze held his hand lightly on her neck and continued gazing. Lumikki could already feel herself throbbing and slick. Her breathing sped up. Her pulse pounded against Blaze’s fingers. Leaning in, Blaze grazed her mouth with his, drawing his tongue teasingly along her lower lip, not kissing in earnest yet. Lumikki had to work to keep herself from grabbing Blaze with both hands and sucking his lips greedily. Finally, Blaze pressed his mouth gently against Lumikki’s and began to kiss her just as irresistibly as he could. Lumikki would have groaned if she could make any sound. She closed her eyes and abandoned herself without reservation.

Suddenly, the kissing changed, becoming softer, tender, more tentative. It wasn’t Blaze kissing her anymore. Lumikki opened her eyes, and the person kissing her drew away slightly. Lumikki looked him straight in the eyes.

“How old is that joke even?” Lumikki muttered as she stretched her arms, which felt numb.

“At least a hundred years.”

“Actually, it’s much older than that. Perrault wrote down his version in the 1600s and the Grimms did theirs in the 1800s. But the story was being told a long time before then. Did you know that, in one of the older versions, the prince didn’t wake Sleeping Beauty up with a gentle kiss at all? He raped her. And even that didn’t wake her up until she gave birth to twins that . . .”

Sampsa had slipped his hand under the blanket and was caressing Lumikki’s thighs, gradually moving toward her crotch. Lumikki was starting to have a hard time talking. The desire her dream had awoken was still pressing.

“Save the lectures for school,” Sampsa whispered and then kissed her more insistently.

Lumikki stopped thinking about anything but Sampsa’s lips and fingers. She didn’t have a reason to think of anything else. Or anyone.

Sitting at the kitchen table, Lumikki looked at Sampsa’s back as he brewed her espresso in a Moka Express and heated water for cocoa on another burner for himself. Sampsa had a nicely muscled, confident back. His plaid flannel pajama pants hung down just enough on his hips to show the two depressions between his buttocks and lower back. Lumikki restrained her desire to go rub her thumbs into them.

Sampsa’s dark brown hair was mussed, and he was humming a folk song his group was practicing. They played modern folk music, and Sampsa was the group’s violinist and lead singer. Lumikki had heard them play a couple of times at school assemblies. Not exactly her kind of music, but it was fast, happy, and energetic. For their genre, they were obviously quite good.

Early December sleet splashed against the kitchen windowpanes. Lumikki pulled her feet up onto her chair, wrapping her arms around them and resting her chin on her knees. At what point had it become perfectly normal to have a sweet, half-naked boy bustling about in the kitchen of her pathetic little studio apartment every morning?

It had all started at the beginning of the fall term, in mid-August. Maybe not right at the beginning, since for the first few days everyone in the school had wanted to talk to Lumikki and hear about the fire in Prague and how she saved the cult members who set it from committing suicide. How did it feel to be a hero? How did it feel to be famous? How did it feel to see her picture in all the magazines? Of course, the media in Finland had covered the story, and practically every newspaper wanted to interview Lumikki after she got home. But she had declined. And she’d handled her inquisitive schoolmates’ questions by responding so briefly they grew bored with how little they were getting out of her.

Then Sampsa came. He had been in the same high school as Lumikki all along. Walked the same halls, sat in the same classrooms. Lumikki had known his name, but Sampsa had never been anything more than another face in the crowd.

One day, Sampsa sat down next to Lumikki in the cafeteria. He sought her out to chat before class and then walked her home as far as the square downtown. And he did it all as if it were the most natural thing in the world. Sampsa didn’t pressure her or force himself into Lumikki’s life. When a casual conversation reached a natural conclusion, he didn’t try to drag it out. He never took offense at Lumikki’s occasional, rather unfriendly rebuffs. Sampsa simply talked to her, looking at her with that friendly, open gaze of his, being present but knowing when to leave before the mood turned awkward.

Gradually, Lumikki found herself looking forward to seeing Sampsa. She felt warm when he sat next to her and looked her straight in the eyes, sincerely and happily. Tiny butterflies began flitting around Lumikki’s stomach when Sampsa’s hand grazed hers.

They started getting together outside of school. To go on long walks, to drink coffee, to go to concerts. Lumikki felt like a feather carried by a gentle breeze into moments and situations that felt utterly natural and right. Hand in hand with Sampsa. The slightly fumbling yet warm first kiss one dark November evening. The hand that stroked her hair and back the first time he slept at her place. Sampsa was patient. He didn’t try to lead Lumikki into doing anything she wasn’t ready for.

Then, one night, Lumikki was ready. And she wasn’t the slightest bit surprised that physical intimacy with Sampsa was just as good and safe and right as everything else with him.

By December, they were an official couple. Lumikki felt like things were the way they were supposed to be. She had finally fallen in love with someone new. She had gotten over Blaze and their breakup, even though it had taken a long time—more than a year. Blaze had disappeared completely from Lumikki’s life when his gender reassignment process from physical girl to physical boy was at its most difficult. Blaze thought he couldn’t be with anyone then, not even his beloved Lumikki, and he hadn’t given her any option other than to accept that decision, even though she could never completely understand it.

But now, Sampsa was in her kitchen, brewing coffee and humming and generally making Lumikki want to kiss every vertebra in his spine.

This was life. Life was good.

It didn’t even matter that sleet was buffeting the window so hard now that it almost sounded like someone was clawing the glass trying to get in.

Son of Sun (Forgotten Gods (Book 2)) by Clair, Rosemary
The Lazarus Vault by Tom Harper
Secret Black Projects of the New World Order by Tim Swartz
Security by Mike Shade
The Cabal by Hagberg, David
The Search by Darrell Maloney
All I Want by Natalie Ann
The Madwoman Upstairs by Catherine Lowell
The Kitten Hunt by Anna Wilson
Witches of the Deep (The Memento Mori Witch Trilogy Book 3) by C.N. Crawford
Our partner