Read As I Close My Eyes Online

As I Close My Eyes 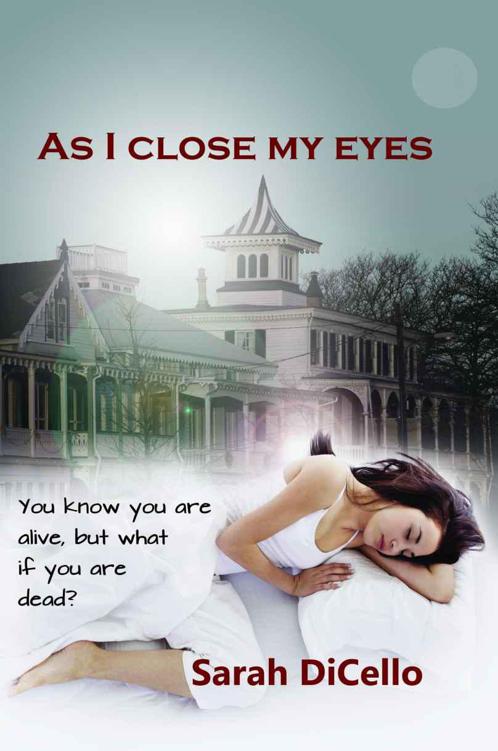 As I Close My Eyes

'As I Close My Eyes' is published by Taylor Street Publishing LLC, who can be contacted at:

'As I Close My Eyes' is the copyright of the author, Sarah DiCello, 2012. All rights are reserved.

All characters are fictional, and any resemblance to anyone living or dead is accidental.

There is one thing I know without a doubt. When I close my eyes as Danielle Grayson, I open them as Caroline.

When this journey began, I assumed it was because of the fall. That may have been the catalyst, but my life will forever exist somewhere between two eras.

At the inception of the dreams, I’d only catch glimpses and snapshots of my surroundings. I’d wake up and have to piece together each scene to get a clear picture as to what was occurring around me. Now it’s as though I’m spending hours or even days away as Caroline. Looking down at her hands; talking with her inflection; and living in a world without technology. Oh, how I missed my iPod. I felt as though I was a part of an experiment to see how someone from today could survive in a time when Edison had just invented the phonograph.

Robert and I spent our days taking long walks along the dirt roads, admiring the ocean views, and marveling at the rebuilding of the small town. I enjoyed my time with my Victorian family just as much as I did while awake in present-day Georgia.

Even though the two worlds remained separate from one another for a few weeks, something changed. It was in the expressions and mannerisms of those around me in my waking life as Danielle. I’d seen these same distinctions in the people I dreamt about. Not in everyone. Just in those closest to me both asleep and awake. It was suddenly clear that these weren’t conscious dreams or people I had made up as silly characters in the drama of my mind. This altered every aspect of my existence as Danielle.

There was a time when a normal day meant studying for an exam, eating lunch under my favorite tree on campus, or spending time with my friends. Now my days here are spent in and out of reality, twisting everything I thought I knew into a giant, complex ball of questions. The accident opened up a door in my mind, letting in a flurry of dreams and visions, taking over every thought I had both asleep and awake.

It should have been the perfect way to start the summer. Relaxing on the water with nothing to do but reminisce about the past year of college that had been full of late-nighters and Ramen noodle dinners. Soon, everything would be different.

Shannon, Eric, Brad, and I began our day the same way we always did when presented with a few hours of freedom - on Brad’s boat, in the middle of Lake Lanier.

We had been friends since Sugar Hill Elementary School and each had our roles in this small circle of friendship. Shannon held the title of the pretty one whose parents never expected to amount to much more than a beautiful face; Eric drew people in with his peculiar magnetism and subtle display of wealth, provided graciously by his grandparents; Brad exuded arrogance, flirting with every girl but Shannon, who he had been in a relationship with since the third grade; and then there was me. The girl no one noticed.

When we weren’t in school at Gainesville State College in Georgia, we spent our time on the lake. Throughout high school, our trips on the boat developed into an almost daily event. The lake was only a half hour drive from Sugar Hill, Georgia, where I lived all of my life. Over the years, it had become a popular destination for vacationers from Atlanta to get away from the big city. The water washed away all of the stress from our daily lives.

Mountains of green surrounded Lake Lanier with gorgeous, colonial-style homes gracing its shores. Many families in Sugar Hill had cabins or larger homes here, while other visitors only came for the summer season.

The docks of the homes lining the river looked best at night with Tiki torches outlining the edges of the grass as it faded into sand. Glass balls glowing with candles inside extended down from the branches of trees along the shorelines of many properties.

A few boats around us sat, anchored to the lakebed below. The bulk of the tourists hadn’t arrived yet for the summer season, so the lake stayed calm with only the occasional boat floating by. After hours on the water, we should have been packing up to head back to shore, but Shannon and Eric wanted to test out the new water skis Brad had received for his birthday.

Brad’s mama and daddy owned the local boat shop, so you’d think his daddy would buy a fancier new one to replace the old, beat-up, floating can he called a boat. With fewer vacationers coming to the lake in the past two years due to the market crash, Brad’s family’s business had taken a severe hit and their dreams of expanding were put on hold indefinitely.

“
Who wants to try out the water skies first?” asked Brad from the captain’s seat up front.

Eric volunteered, Polo shorts clinging to his rear end for dear life as he emerged from the middle of the wake. He executed perfect form and stood straight up for a whole ten minutes before his arrogance took over. Gliding over small waves, he attempted a low twist in the air but plummeted into the cool water half way through his turn. His confidence reminded me of a time in eighth grade when Eric tried to do a flip off one of the high brick walls surrounding our school and practically broke his neck.

“
Come on, you didn’t even try,” yelled Brad, slightly slurring his words from all of the alcohol he had in his system. The rules of the road didn’t seem to matter while on the boat. If Brad had been given a breathalyzer that afternoon, he’d have been way over the limit, but no one bothered us out here.

“
Shut up,” Eric hollered, although it sounded more like “Shupth upth” with the amount of water that bubbled out of his mouth.

I suggested that Shannon go next so she could be the first girl in the water instead of me.

“
Y’all are crazy if you think I’m doing that wearing a bikini.” She promptly returned to reading
Glamour
and sipping a very large margarita. Her response was typical. If Shannon’s plan for the day was in any way interrupted, she’d immerse herself in a beauty magazine and ignore the world around her. It drove me crazy.

“
It’s nothin’ we haven’t seen before, Shan,” stated Brad as he blew her a sarcastic kiss. Shannon didn’t even look up from the horoscope page to acknowledge Brad’s comment.

I waited for Eric to climb up the white ladder onto the boat and then it was my turn to descend.

It’s not like I hadn’t been on water skis before. It had just been a while and I was sure it would be like riding a bike. Besides, bikinis weren’t my thing so I didn’t have to worry about showing all of Lake Lanier my goods. I felt comfortable sporting boy shorts and a shrunken t-shirt for the afternoon.

I climbed down the ladder into the water with my brown, wavy hair loosely tied up in a mess of a bun and slid into lake below. A little voice inside my head told me that I should just go back to sipping my water instead of swimming in it, but I ignored that thought and hopped on the skis like a pro. The boat slowly pulled me up onto the surface and I was glad I made it that far. Dragging behind the boat, I could see Shannon sitting on Brad’s lap. I guess she had forgiven Brad for his earlier comment. Eric was drinking another Corona as he swerved on the lake, trying to get me to fall.

As I
maneuvered
the skis with surprising ease, my anxiety slipped into the wake. What a perfect ending to a perfect day, I thought as I glided on the surface. But as I hopped over a small, unexpected wave, I began to lose my balance. I tried to stay on my feet, but I just couldn't get my skis parallel again. I knew I was going to slam into the surface and there wasn’t anything I could do to gain control. Suddenly, everything went dark.

What? Who’s saying that? Where am I? Flames blazing in the distance overwhelmed me with heat.

“
We have to get out of here,” said an older woman with a look of pure terror on her face. She reached for my hand to pull me up, but I didn’t have the strength and could only meet her halfway.

This wasn’t Lake Lanier. In fact, it looked nothing like Georgia with the small houses and dirt roads I could only see from a distance. The images around me were very fuzzy and misconstrued. I couldn’t tell what was going on in the background, but it was causing hysteria and panic in the eyes of everyone around me. Just ahead of us, I could see a mother holding her child, crying. I wondered if she had lost someone. There was a faint orange glow in the distance but I couldn’t tell if it was a sunset or a fire.

Stained River by Faxon, David
Socket 3 - The Legend of Socket Greeny by Bertauski, Tony
Ms. Leakey Is Freaky! by Dan Gutman
Gods & Monsters by Benedict, Lyn
Summer on the Cape by J.M. Bronston
A Shock to the System by Simon Brett
Night Hungers by Kathi S Barton
Depraved 2 by Bryan Smith
Knight of Wands (Knights of the Tarot Book 1) by Mason, Nina
The Last Pilot: A Novel by Benjamin Johncock
Our partner