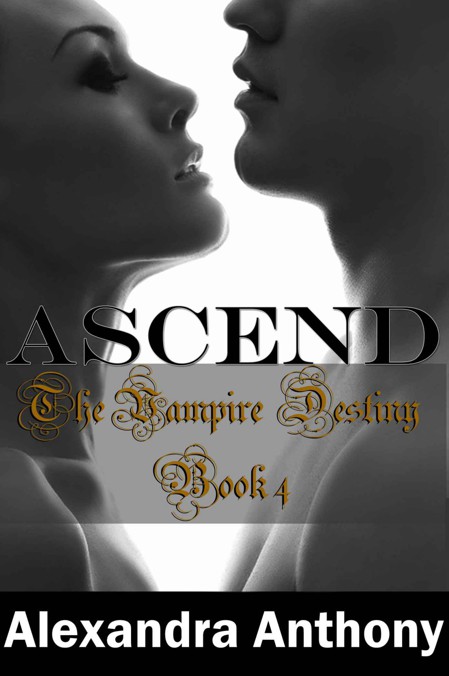 Discover other titles by Alexandra Anthony at
alexandra-anthony.com

This ebook is licensed for your personal enjoyment only.  This ebook may not be re-sold or given away to other people.  If you would like to share this book with another person, please purchase an additional copy for each recipient.  If you’re reading this book and did not purchase it, or it was not purchased for your use only, then please return to Smashwords.com and purchase your own copy.  Thank you for respecting the hard work of this author.

The Vampire Destiny Series books are for adults only.  They contain sexy vampires, graphic language, graphic romantic/erotic content and situations that aren't for the faint of heart.  Consider yourself warned.

Chapter 1 - I Was Dying To Get To You

Chapter 4 - Line in the Sand

Chapter 5 - To Have and to Hold

Chapter 6 - Keeping Secrets on My Pillow

Chapter 8 - Welcome to the Family

This book is dedicated to the dreamers, the lovers and those that never give up on true love.

To my family…thank you for watching and tolerating my restless days (and nights) hunched over the computer.

To my sister from another mother, Sue…Girlfriend, I’d be lost without you.  From our love of celebrity gossip to your support throughout the last few years…we may not be blood, but we are family.

To Aisha…thank you for your Dutch translations in the book, wonderful support and friendship.

To my Street Team…you rock, my friends!

To Ally Thomas…your wonderful friendship, support and never-ending help from the beginning of this journey has been amazing.

And finally, to my fans and readers…without you, there would be no adventure for Stefan & Josie.  Your support, dedication and enthusiasm bolster me when my spirits sag and keep me writing.  Thank you.

“I’ll lift you and you lift me, and we’ll both ascend together.” ~John Greenleaf Whittier

Deception is bitter pill to swallow.  As difficult as it was for me to fathom, I had to face the reality that the Council had been dismantled in a well-executed attack. Adolfo and Lenora’s futures were unreadable to me, utterly black.  Their void could only mean one thing: they had met their final death.  There was no other option.  Sofia had been badly injured in what was being labeled as an unfortunate gas explosion by the media at the Carriage House in the Upper East Side.

Truth be known, I had come close to meeting my own death that day as well.  If not for my last minute vision of the building exploding into a fireball, Nigel, Amir and I would have perished, disintegrating into a pile of ash. We had all been lured to the Carriage House under the guise of an emergency meeting.

There had been no meeting for us to attend.  Only death had been there to greet us.

Logically, I knew there was only one person that could have been responsible for the destruction of the Council.  They had everything to gain and nothing to lose.  It was the very same vampire that wanted their secrets to burn along with the building, the written logs of their disturbing experiments and lies being consumed by the fiery inferno. The mastermind behind this would be facing an unpleasant surprise when he would learn of our survival.  He would have not expected any of us to walk away alive.  This is what happens when greed and the need for power overtakes common sense.  I had watched my own maker succumb to the same sort of madness hundreds of years ago.  Many were not suited for immortality.  Centuries of death could destroy the strongest of minds and resolve.

There is no secret, no reason I should not lay it on the line.  I knew exactly who masterminded this entire fiasco.  It was none other than my beloved’s father, Kian Ahearne.

Unbeknownst to Kian, I had copies of his journals and tomes locked away for my own safekeeping.  Someday soon, we would need this proof.  He had grown sloppy, careless with his authority.  His arrogance would be his downfall.  I had insured Josephine's safety by his own recklessness.  At some point, this safely hidden evidence would be his final demise and if I were lucky, he would die at my hands.  It would be a sort of poetic justice that he would meet his end at the same hands that had killed hundreds, if not thousands of innocent vampires at his final command.

Revenge would be sweet; however, it would be a pittance to the turmoil he’d caused over the centuries.  It kept my mind focused as we spent hours navigating through the underground tunnels to make it to the surface to safety.  The only thing that kept me motivated to return was Josephine.  Amir’s presence may have broken our bond, but I could feel my love for her urging me to continue, the promise of her survival my motivation.

Josephine.  The love of my existence would soon be mine in every way possible: my lover, my mate and my wife.  My dead heart sang with the knowledge as I trudged through the bowels of the city.

Kian had disappeared after the fire, leading us all to believe he too had perished.  I found it difficult to believe he was truly dead.  He was much too crafty to not have had an escape plan in place.  Yet even as his daughter lay motionless on our bed, changing into her true mortal existence, I was on guard as he had not been seen for nor heard from for two days.  Like a cockroach, he would show himself under the cloak of darkness when he felt it was secure.  He would have formed a safety net of some sort.  He had vampires assisting him.

Kian’s power gave him the upper hand.  He was a powerful shield, much like Josephine.  While her power could manifest physically, he could shield himself and his intentions quite well.  We were playing a dangerous game of Russian roulette.  Each time we met, the barrel was spun.

For now, we had to remain vigilant.  We could not let our guard down for a moment.  He would be ready to pick off each of us, one by one.  As I sat at Josephine’s bedside, my long dead heart was heavy with the knowledge that we would be at the top of his list.  If he separated or killed one of us, the other would simply wither away.  The bond that tied us together so strongly could ultimately be our biggest vulnerability.

There would have to be revenge.  There were many ways to achieve it and equally as many ways to pay for it.  I had witnessed the evil one man was capable of carrying out.  It was now my choice to act and pay the hefty price for keeping those I love safe.

Chapter 1
- I Was Dying To Get To You

The words were on repeat in my mind like a broken record...an endless echo of my hastily spoken promise played through my mind.

It could have been hours, days, months, years...time ceased to exist.  Or at least the way I recalled time existing. As I drifted between consciousness, I vividly remembered telling Stefan I was dying to be with him... and the desperation of feeling his arms enclose around me, the soul crushing sounds of his dry sobs wracking his strong body.  Even as I slipped away into this state of in between, neither human nor immortal, I thought it unfair and cruel that this beautiful, strong man was suffering because of me.  It was then I became enveloped in all compassing darkness, the searing pain of my body making its immortal changes, my new reality.  Underneath the agony was my driving desire to be back at his side.  It was an obsession that was like a fever, burning me up inside.

My heart had long given up the battle.  It lay silent in my chest, my body held in place as if it was restrained with wire cables, keeping me tethered to this strange version of reality.  My lungs felt heavy, sluggish.  Every raspy breath I drew was a struggle, like making the attempt to breathe underwater.  It was then I realized I no longer had the need to do it.  But I focused on simply trying to inhale and exhale because it was something concrete and normal I could feel and do.  And I wanted to feel something...anything.