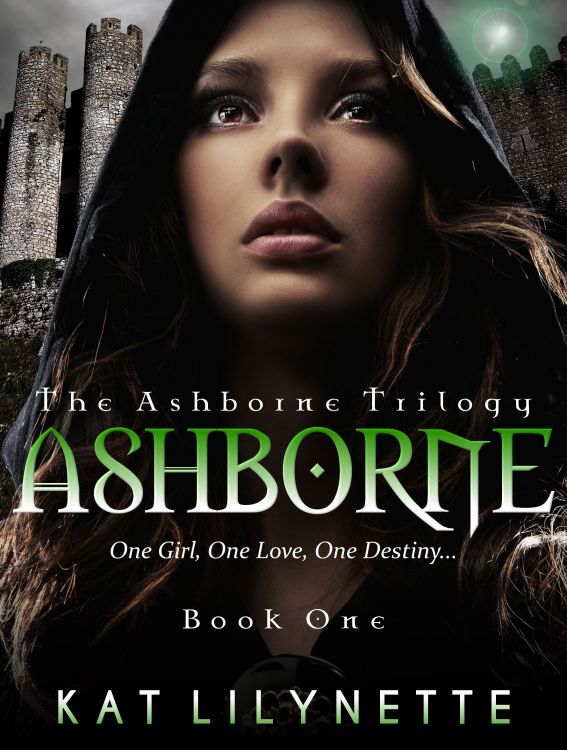 Book one of the Ashborne
Trilogy

Want to receive an email
when I release my next book?

To Gloria and Steven for
their continued support.

Book One of the Ashborne
Trilogy

At only eighteen-years-old,
Amber Ashborne is sole heir to the throne of Ashborne, the most
powerful kingdom in Everrathe. In an attempt to earn the love and
approval her emotionally abusive father has never given, the future
queen raised herself to be the son he could never have; forgoing
the ease and luxury of a princess's life for that of the sword and
steel of a knight's.
However, the king's disdain would not be overcome, and under the
weight of the Ashborne crown, the young princess resigned herself
to a loveless life of battle, guilt and torment. Until fate crosses
her path with a mysterious young man named Emoren.
Amber is caught off guard as the young commoner effortlessly breaks
through the walls surrounding her, bringing an unfamiliar light to
her dark, battle-ridden world. And despite being preserved for
royal engagement, the future queen can't deny the feelings that
quickly seize her heart. Little does she know, these forbidden
feelings will not only shape her future, but that of an entire
kingdom.

The sun was just beginning to set. The
sky was softly emblazoned with colors of orange, pink and purple,
letting me know this battle was about to come to its end. I stood
my ground as the four of them took flank on either side of me. I
could tell from their nonchalant swagger that they expected this
girl to be easy prey, but I would show them otherwise.

My right foot glided along the
trampled grass as I took my stance. I raised my sword, anxiously
awaiting the one who would be bold enough to strike first.
Suddenly, my eyes shifted as the first of the four lunged at me
from the left.

“
Too slow,” I whispered to
myself.

Deflecting his blade and hammering my
sword's hilt into the back of his helm in one, effortless spin, the
attacker collapsed to the ground. Two more quickly suffered a
similar fate as they came at me in succession.

The last of my attackers stood in
front of me, hesitant to meet the same end as his comrades. I'm
sure the look in my eyes told him that I wasn't about to let him
escape unharmed. Mustering up what must have been all of his
courage, he let out a roar and came at me.

As I stepped in to meet his broad
swing, my foot caught a rock hidden within the grass. I only lost
my balance for half a second, but it was too late. I was going to
be bested this time. I raised my head and peered through my helm at
my assailant. I wanted him to see my eyes as he struck me down, and
I wanted to see his.

Realizing what had happened, his eyes
widened as his blade smashed into my shoulder armor. The blow
didn't even bring me to the ground.

What the hell was
that?!
I instinctively reached out, using
my left hand to grip the inside of his wrist with all my might. I
could feel his tendons tighten to ensure he didn't lose hold of his
weapon.

“
I'm going to make you
regret that,” I growled.

I pulled him toward me as I
batter-rammed the heel my boot squarely into his chest. If there
was one part of my body that was stronger than his, it was
certainly my legs, and he would never forget it. His armor caved to
the force of my blow as he went flying backwards. His sword flopped
to the ground like a dead fish, looking now as useless as he
was.

He lay squirming on the ground, his
hands tugging at the rim of his chest piece, trying desperately to
regain the wind that had just been knocked out of him. I could hear
his desperate, shallow breaths as I walked up to him.

Placing my boot upon his chest and
looking down on him, I raised my sword high above my head. It
gleamed with the light of the setting sun as if it were ablaze. My
grip tightened. My muscles tensed. I was prepared to rip this sword
from the sky and give this pathetic excuse for a knight what he
deserved.

Just as I was about to deal my
punishment, an all-too-familiar voice shattered my concentration.
It was Gentry, the Captain of the White Torch knights and one of my
only friends. My arms and sword still raised to the sky, I spun my
head around and glared at him with frustration.

“
That's enough, Amber,” he
said sternly. His face adorning the wise, calm and battle-worn
expression it always had.

Begrudgingly lowering my sword, I
turned toward Gentry and the rest of the new White Torch recruits.
The fresh-faced recruits were all just standing there, staring at
me in silence, like I was some kind of crazy person. I pulled off
my helm and stared back at them. My long, dark-brown hair danced in
the breeze that was cooling my light, almond-colored skin. I
continued eying them for a few moments before stomping over to
address the lot of them.

“
Listen up!” I commanded.
“Any knight who pulls their punches against me will spend a month
in the oubliette!” I looked over the sea of silent of faces,
ensuring my message was understood.

“
Yes, Highness!” they
hesitantly replied, clearly afraid of both injuring the Princess of
Ashborne and enduring the oubliette.

I looked over at the gasping knight
that Gentry was helping to his feet, and I hid the guilt that was
welling up in my heart by maintaining my pissed-off scowl as I
stormed off the field and headed toward the castle.

I made my way to my chambers where
Penelope, my handmaiden, was waiting for me. As I opened my chamber
door, I could see Penelope standing near the window. Her arms were
crossed behind the beige servant gown she was always wearing, and
her long, blonde hair framed the youthful innocence of her teenage
face.

“
Welcome back, Highness,”
she said softly as I, a bit more calm now, slowly closed the door
behind me. “Are you all right? I saw what happened.” Her kind voice
was filled with genuine concern.

“
I'm fine,” I replied
quietly, pulling at my chainmail. “Please, help me take this
off.”

“
Of course,” she smiled,
“come sit here.” Penelope pat the bench near the window where she'd
sat me a hundred times before.

Penelope began removing each piece of
armor as I stared out the window. I could see Gentry addressing the
new recruits below as twilight took hold of the sky. My thoughts
returned to the recruit I made an example of. I began to feel bad
about my actions and wondered if maybe I had gone too
far.

“
You had to do that,”
Penelope said, clearly sensing my moment of self-doubt. “If they
don't train with all their might, when a real battle comes, they'll
pay the price with their lives.”

Her tone was ripe with the wonderful
naivety of someone who has never endured a battlefield; someone who
didn't bear the burden of carrying the Ashborne name. I loved that
about her.

“
I know…” I replied
solemnly. “It still doesn't make it any easier.”

Penelope kept working dutifully as we
sat in silence for a few moments. She had nearly finished removing
my armor when she finally said, “Don't worry, I have just the thing
to make you feel better!”

“
It's one of my favorite
thing things in the whole world! Guess what it is!”

I rolled my eyes and smiled. I already
knew the answer before I turned to look up at her beaming face. “Is
it a hot bath?”

“
A hot bath!” she said
loudly, as if I had won a prize. “I've already heated the water for
you!” she added, doing some kind of little dance, obviously trying
to cheer me up.

Penelope was always like that. She
wasn't jaded like I was, she was a joyous person. She found hope,
light and love in everything. Despite only being a year younger
than I, she was still pure of heart. I envied and adored that about
her.

Ever since we were little kids, and
she was just the blacksmith's daughter and I was just the king's
daughter, she's always strived to keep me in high spirits under the
weight of the Ashborne crown. With everything I've been through in
my 18 years, it scares me to think what kind of twisted I would
have become without her in my life. She was a treasured
friend.

“
Jeez. Doesn't take much
to make you happy, does it?” I teased.

“
Hey! Not everyone lives
in a giant castle with people to make hot water for them, ya know!
Hot baths really are one of my favorite things!” she said, getting
a little embarrassed by her own simple nature.

“
Penelope?” I sighed with
a smile.

“
Yes, Highness?” she
replied, still grinning foolishly from ear to ear. She didn't know
it, but her innocent and lighthearted ways kept me sane.

Her expression grew a bit more serious
as she continued smiling and removed the last piece of my armor. “I
never will.”

In the far corner of the room, I could
see the steam rising from the bathtub Penelope had prepared for me.
Undoing the laces of my leather pants, I continued undressing as I
walked toward it, with Penelope following right behind me. After
another all-day training session with the new recruits, my muscles
ached. A hot bath was just what I needed.

“
Oh! I almost forgot! Your
father told me to tell you that your presence is required at dinner
tonight. Something about the King and Prince of Benethil being the
honored guests.”

“
Ugh, really?!” I groaned,
dropping my clothes to the floor.

“
Yeah. And he also said,
'Tell her to dress like a princess for a change.'” Without missing
a beat, Penelope quickly gathered up the mess I had just
made.

I stepped into the steaming water and
slowly eased my body into it. “Just great. Another fun-filled night
of my father pretending like we actually speak to each other, all
while trying to marry me off to some spoiled brat,” I complained.
“He should know by now that there's not a prince in all of
Everrathe that wants to marry me.”

“
Now that's not true. You
just haven't met the right one yet,” Penelope reassured me as she
took a seat on the edge of the bed.

I winced as the rest of my body grew
accustomed to the hot bath water. I looked over at Penelope, ready
to continue my self-deprecating rant. She was sitting there, ready
and willing to bubble over with words of encouragement for
me.

Bearing my negativity when
I'm like this must be tiring,
I
thought.
Really not sure how she puts up
with it. I need to give her a break.

“
I'm sorry, Penelope. It's
just been a long day. You're right,” I said before switching to my
sarcastic, highborn tone. “I trust you'll lay out something
suitable for me to wear.”

Vincalis the Agitator by Holly Lisle
Bitter Blood by Jerry Bledsoe
See How She Awakens by MIchelle Graves
Tamed by You by Kate Perry
Horrible Harry at Halloween by Suzy Kline
Body of Lies by David Ignatius
Sweet Hearts by Connie Shelton
Demo by Alison Miller
Blue Twilight by King, Sarah
Kristen Blooming by Jenny Penn
Our partner