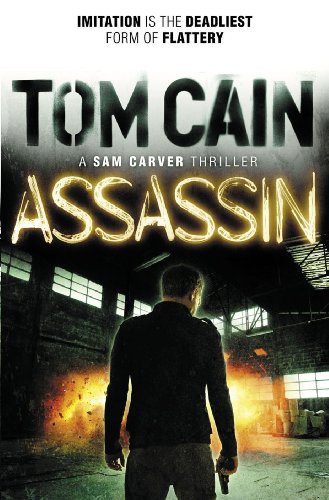 Tom Cain has asserted his right under the Copyright, Designs and Patents Act 1988 to be identified as the author of this work.

Tom Cain is the pseudonym for an award-winning journalist with twenty-five years’ experience working for Fleet Street newspapers. He has lived in Moscow, Washington DC and Havana, Cuba. He is the author of
The Accident Man
and
The Survivor
.

THE ACCIDENT MAN
THE SURVIVOR

and published by Corgi Books

Lara Dashian was as pretty as a pixie, as fresh and full of life as a wildflower meadow on a sunny spring day. At the age of eighteen, she was loving, dutiful and unsullied, her parents’ pride and joy. Then she left her hometown of Armavir in western Armenia and caught a bus to the capital Yerevan to meet a man her aunt had said could get her a good job in the West. When her supposed benefactor took her papers and her meagre savings and then shut her in a cellar beneath a suburban bar, Lara learned the hard way that some people will sell their own family to buy a new TV.

The naive, innocent girl that she had been until then did not exist any more. She had been ripped apart by the process of repeated sexual assault, punishment and intimidation that people-traffickers call ‘breaking in’. Its purpose is very straightforward: to accustom young women to the inevitability of rape and the absolute necessity, for their own self-preservation, of acting as though they enjoy it. Lara had cowered in terror as another girl, brave enough to resist, was beaten to death before her eyes as a warning to the other unwitting slaves with whom she had been imprisoned. Her old self had been left behind for ever as a new Lara obeyed her tormentors and stepped aboard the plane that would take her, via Munich, to Dubai.

She had no idea where Dubai was, no more understanding of her final destination than a sheep has of the slaughterhouse. And just like an animal, she was traded along the way. The deal was done in a coffee shop at Munich airport between the trafficker who had flown her from Yerevan and another man, heavily built, with a puffy, unshaven face, heavy gold chains around his neck and wrists, wearing a black leather jacket.

‘This is Khat,’ the trafficker had said.

Lara sat in silence while the two men haggled over her selling price. While they batted numbers back and forth - laughing, switching from coffee to beer, enjoying themselves - Lara tried to come to terms with the unreality of her situation. One man had brought her to the cafe, and another would take her away: her new owner. She rolled the words around in her head - ‘my owner’ - but could make no sense of them. It seemed impossible that such a thing could happen as all around her the life of the airport carried on regardless, still less that she would simply sit there and allow herself to be bought and sold. And yet it had been so.

Now she was bought and sold every day.

In the past week alone Lara had been with at least thirty men, maybe more. She did not count them any more, just the money they gave her. She had to make fifteen hundred dirhams a night, roughly four hundred US dollars, or two-seventy in euros: Lara was rapidly acquiring a head for currency calculations. If she succeeded, Khat would let her microwave a cheap frozen meal before he locked her away in the bare room where she and his three other prostitutes passed their days. If she failed, he would hit her with vicious jabs to the stomach that left her lying on the cheap nylon carpet, winded, weeping and retching.

Now another sale was in prospect. That evening, when Khat came into the room, he seemed upbeat, but also edgy. He looked the girls over, considered for a moment and then pointed at Lara. ‘You,’ he said. ‘Get dressed, your best clothes. Take extra care when you paint your face. You’re coming with me.’

On the way out, Khat told her that a wealthy Englishman had arrived in Dubai. He was very well connected to the city’s most powerful men. He was looking to buy a girl for his own, exclusive use. And he was willing to pay up to thirty thousand euros to get exactly what he wanted.

Lara had gasped at the figure. Despite the income that prostitutes could generate, the sheer number of women on the market meant that they could usually be bought for less than the price of a rusty old second-hand car. In Munich she had fetched just 2,800 euros, inclusive of airfare. No wonder Khat was tense. If Lara caught the buyer’s eye, he stood to make back more than ten times what he had paid for her.

‘But if I have to bring you back here …’ He gave her a cold, leering smile like a wolf eyeing its prey. ‘… I will hit you so hard, it will make all the times before seem like I was only tickling.’

Fifty years ago Dubai had been a dusty, insignificant speck on the map of the Persian Gulf. Yet by the time the twenty-first century dawned it was said to be the fastest-growing city in the world. Barely a week had gone by without the opening of another new five-, six- or even seven-star hotel, each claiming to be more luxurious, more outrageously indulgent than the last. Amidst this brash, relentless extravagance the Karama Pearl, an unimpressive structure barely a dozen storeys tall, was not the most obvious place for a wealthy visitor to conduct his business. It had one feature, however, that marked it out from anywhere else in Dubai: a nightclub that was one of the city’s prime locations for picking up prostitutes.

Tonight, as always, there were tarts wandering from table to table looking for business, but they were just the supporting cast. The stars were up by the bar that snaked down one side of the club. There stood six pimps, each with their most desirable property: six stallholders touting for a foreigner’s custom in a human souk.

The girls who were coming up for sale cast quick, competitive glances at one another, each as fearful of failure as Lara, knowing only one of them could succeed. They toyed with their hair and tossed their heads. As they shifted nervously from foot to foot, their heels tapped against the floor like the shoes of skittish racehorses coming under starter’s orders.

Across the room, on the far side of the club’s dancefloor, sat the man for whom the whole display was being staged. Lara guessed he was probably in his late thirties. He was simply dressed in a white shirt, the sleeves rolled up below his elbows, faded jeans and loafers. He wore no jewellery besides his watch. He had short dark hair and a face whose sharply defined features suggested that the body beneath his clothes was lean and fit. Only his mouth, with its full lips and sullen expression, jarred with his clean-cut features. Lara had become an expert in reading men’s faces. This one, she thought, might have a cruel streak. Yet he was handsome, there was no denying that, and rich, too.

She wondered why he had to buy a girl when plenty of women would happily give themselves to him for free. Perhaps he already had a wife, or simply preferred to pay for what he needed. Some of her regular clients thought sex was simpler that way. All women cost money, they said, but at least with a whore you knew the bill in advance.