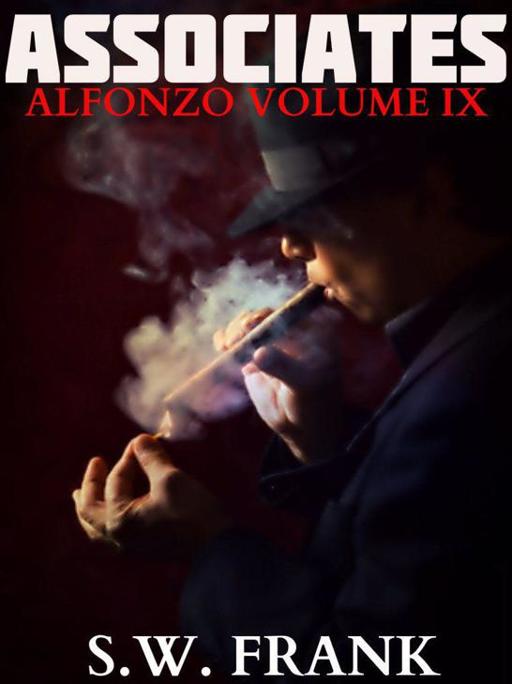 Printed in the United States by Create Space

Cover image for illustration purposes only

No part of this book may be reproduced, stored in a retrieval system in any form without prior written permission of the author. Piracy of the book is a crime. Alfonzo detests thieves and liars, he also believes in Karma. Sometimes it is not laws which govern a person, it is what a person does when nobody watches which is the test of good character and the law of self.

This is a work of fiction. The characters, incidents and events portrayed in this story are not to be construed as real. Any resemblance to any actual persons, living or dead is entirely coincidental.

Thank
you VIP’s for the wonderful discussions and unwavering support. The Inner Circle Book Club, you’re such a nice compilation of people who inspire a writer. I wish I could name everyone who has reached out and expressed their love of the story, but the list will be quite long. A very special thanks to Tiffany, Lucie, Allysen, Yvonne, Sharon, Nicole, Andrea, Barbie, Christi, Yolonda, Alanda, Kasha, Mya, Samantha and especially the incredibly talented Karen Moss for the beautiful Family Chart in the book, geez. The most inclusive and fabulous book clubs, ARC, BRAB, 3RW, BFB &SBC, Romance Junkies and those discovering the story, thank you. To the Indie Authors who speak encouraging words and have shown support. Hand to heart; I support you as well. And to my family, what is a writer’s life without your love and understanding? I would not know.

“Man associates ideas not according to logic or verifiable exactitude, but according to his pleasure and interests. It is for this reason that most truths are nothing but prejudices.”

“Hateful to me as are the gates of hell, Is he who, hiding one thing in his heart, utters another.”

“Money is the worst currency that ever grew among mankind. This sacks cities, this drives men from their homes, this teaches and corrupts the worthiest minds to turn base deeds.”

“There is no witness so terrible and no accuser so powerful as conscience which dwells within us.”

There’s a psychology to getting consumers to buy. You have to make them salivate like Pavlov’s dogs to crave what you have. It must look appetizing, provide perceived pleasure and beliefs your goods or services will further enhance their lives. You do this by wrapping your product in an attractive package and then marketing your brand. That's what Chip learned early about business, and his strip club was doing quite well as a result.

The exterior of Chip’s establishments, from the bars to the strip joints were respectable and classy. The brass, glass and polished wood, devoid of those cheap neon signs or busty women plastered on doors like those seedy places near Times Square is what drew them in. His spots didn’t have pushy whores desperately clinging to customers from the moment they entered. The female staff wasn’t that kind. He made sure they knew the rules. Dangle those tits, tease the poor slobs and play hard to get; most importantly, no chit-chat with the customers. Don’t come to
work high, keep your ass clean and any side hustle taking place better be legit. Chip wanted the best. He paid well and on occasion he gave gifts; he wanted top echelon strippers at The Platinum Door.

Further enticement was t
he extra bling in the form of a posh atmosphere. Customers parted with their bill money willingly once they stepped inside and when they were done spending they went home and lied to their spouses about what happened to the cash. Chip laughed, some of the jokers who said they
lost
the money were actually being honest. They lost it in a pretty woman’s pussy, slobbering tits and pumping feverishly into curvaceous ass –
lost!

The handsome people
on magazine covers and commercials ads were being exploited and so were the consumers. Companies thrived because avarice is encased in every soul, find it, tap it, bring it out and you’ve discovered gold. Smart advertising firms knew the magic of marketing illusions to the masses; sex, excitement and beauty sell.

The stripper sliding down the pole is lovely,
an acrobat and sexy. She’s luring money from pockets as she waxes her butt cheeks to shine that silver rod and smiling seductively in her employer’s direction as he passed. Her name’s Nina’s, Chip's star attraction, fine as butter and she has patrons drooling lustfully as if she were Pavlov himself. Chip gave a perfunctory nod in her direction. He didn’t want the woman distracted. 'Work magic and make me money,' was his thought. Nina's a stripper, whether she liked the title or not. She became upset whenever he said it; but Chip didn’t hedge words when it came to the truth. Nowadays, politically correct is lying because everyone’s afraid to speak and offend. The less offensive term is exotic dancer. In his view, taking off your clothes to sultry music and grinding poles for a living makes you a stripper, just like screwing a man for money isn’t a lady of the night, she’s a damn prostitute. Nina, the star attraction is both.

Everybody who was anybody in New York visited. Some even came from out of town for the entertainment. With the backing of the Caminello’s he never had problems with troublemakers or the police.

High ranking Mafioso came through quite often. They were

Chip navigated around the aisles of tables, greeting a few regulars and patting shoulders as he passed. The seductive music had the patrons’ rapt attention and he smiled when he saw the full bar. Sex and liquor make a great team and he was the coach lining his pockets with financial victory.

Tony, a burly man with a chocolate complexion, sharp features and piercing brown eyes waited near the door leading downstairs. The spotlight stayed on stage and nobody paid heed when the door opened and the pair descended the stairs.

“What you learn?” Chip asked his worker.

“Nobody knows anything about the guy.”

“You telling me nobody know who the fuck he is?”

Tony held open the office door for his boss. “He’s a mystery.”

Chip went to his desk and pulled out a stack of bills in a rubber-band. “This is five grand for Sergio. Tell him it’s my peace offering and ask him about Mohawk and get a name. If the stupid punk asks why, just say I have a business proposition for Mohawk, you understand?”

Chip nodded. “Mohawk might come in handy around here.”

Tony frowned. He’d been Chip’s right hand man for years. The Mohawk wearing prick with Sergio wasn’t shit. In a fight he could take him out, but he had his instructions and he’d follow to the letter, because that’s what good soldiers do, they obey. “Sure.”

Chip locked the drawer and sat. He wanted to reward Tony for his loyalty by replacing his ass. “No more shake-downs big guy. I need you in the clubs; watching over things, get what I’m saying? With Mohawk on board, he can handle the collections department and that’ll free you up for bigger things.”

Tony liked the idea and took the bait. “Okay.”

Chip folded his hands atop the desk. Men like Tony

required
stroking. What he needed is a no-nonsense man like Mohawk if he planned to ascend in rank within the mafia. The right soldiers and someone who got results is the only way to get there. Two hundred thousand, one hundred grand of it interest and a fifty as a bonus got Chip’s attention. Yeah, he wanted that guy on his side and Tony, well, if he didn’t like it, he’d get Mohawk to put a bullet in his head!

“For if there is a sin against life, it consists perhaps not so much in despairing of life as in hoping for another life and in eluding the implacable grandeur of this life.”

The warmth of the sun’s rays blanketed the island. The heat snuck its ass in early; it usually did in tropical places. Alfonzo was accustomed to the climate and wore his usual attire, a hand tailored suit. The platinum watch on his wrist caught the light and twinkled along with a platinum wedding band. On his right hand was an antique ring, the Supremo, a jeweled crest of a Giacanti Overlord whose glare nearly rivaled the sun.

The
tanned skin glowed from nature's lamp, yet there wasn’t one trickle of sweat. The azul irises were as cool and

dangerous
as the sparkling blue ocean beyond Puerto Rico's sand.

Alfonzo
stood in observance of the final phase of another construction project. He was the President, CEO, CFO, COO, and Overseer of many companies who insisted upon signing off on every goddamn check. He trusted no one. Greed and lust were dormant iniquities in every man.

The employees worked diligently to spread the gray mixture over the wire mesh before it hardened, aware the CEO
watched their actions from several kilometers away.  The cement mixer twirled and rumbled as it poured from the back of the truck which Alfonzo thought resembled a bee’s round ass. The workers quickly spread the concrete liquid. They moved with skill as their biceps flexed and perspiration glistened from their pores as they hurriedly worked to cover the large area. Alfonzo suspected their haste was to escape the heat which was expected to climb to ninety-eight degrees before noon.

The Foreman addressed the CEO. “The landscapers will return when we’re done to complete the walkway and parking lot.”

Alfonzo listened but did not respond and his eyes never wavered from a specific spot.

“We’ve finished ahead of schedule, bueno, no?”

Alfonzo nodded. Buried beneath the earth was Lou’s body without a coffin or any ceremonial libations. The treacherous man did not deserve a eulogy or any traditional valediction for his treachery. He was a piece of shit in Alfonzo’s eyes. In his crime business he didn’t get attached to the employees. They were exorbitantly compensated to do a job. Failure to perform or any incompetence called for immediate termination. Retirement packages were tombstones and heavy.

Alfonzo’s eyes narrowed. He wasn’t concerned about the landscapers or any of that shit. The only reason he stopped by this morning was to ensure Lou’s corpse remained underground. He scoffed. "Yeah, it’s very good. Nice work. Treat the guys to lunch. It’s going to get hot as hell, so let them break early, comprende?”

A Long, Long Sleep by Anna Sheehan
The Tooth by Des Hunt
The Dark One: Dark Knight by Kathryn le Veque
The Lies We Told by Diane Chamberlain
The Devil Is a Marquess (Rescued from Ruin Book 4) by Elisa Braden
Panama by Thomas McGuane
High School Reunion by Mallory Kane
The Duke Can Go to the Devil by Erin Knightley
Ms. Taken Identity by Dan Begley
Banished (A Retribution Novel) by Cindy Stark
Our partner