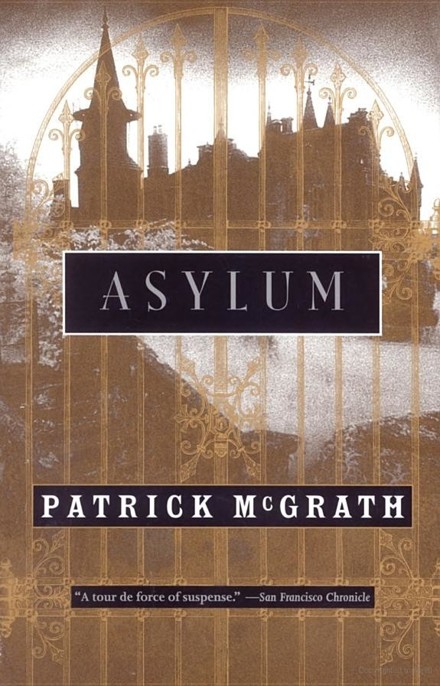 “Superb….
Asylum
is McGrath’s most somber and most realistic book, and also his best.”

“A book as absorbing as it is intelligent…. The story of this love affair unfolds like a dream into a nightmare—the characters move relentlessly toward their tragic end with desire raging like a fire, gathering strength and destroying everything and everyone in its path.”

“We don’t associate Gothic novels with elegance and discretion, but these are the defining features of Patrick McGrath’s work.”

“A tour de force…. From beginning to end
Asylum
is a hypnotic read, beautifully judged and … ruthlessly manipulative.”

“A cleverly insidious, beautifully rendered thriller with just the right balance of splatter and innuendo.”

“Brilliant … a beautiful, relentless novel. McGrath renders Stella’s passion for Edgar so vivid and so comprehensible that as readers we cannot imagine her life without him any more than she can. We can only wring our hands and keep turning the glittering pages.”

“McGrath’s talent as a writer is first class.”

“Coolly compelling…. The book’s power ultimately lies not only in the story it tells, but how it’s told and who is doing the telling.”

“A virtuoso of contrast, McGrath wields a cleverly modernized form of Victorianism, precise and stately, to render scenes of unsettling and suspenseful eroticism.”

“McGrath’s chillingly scientific prose lend an eeriness to
Asylum
that elevates it from a good thriller to a flawless expression of the arabesque.”

For all her help and support in the writing of this, my love and gratitude to my wife, Maria; and for his assistance with matters of psychiatry my warmest thanks to Dr. Brian O’Connell.

The catastrophic love affair characterized by sexual obsession has been a professional interest of mine for many years now. Such relationships vary widely in duration and intensity but tend to pass through the same stages. Recognition. Identification. Assignation. Structure. Complication. And so on. Stella Raphael’s story is one of the saddest I know. A deeply frustrated woman, she suffered the predictable consequences of a long denial collapsing in the face of sudden overwhelming temptation. And she was a romantic. She translated her experience with Edgar Stark into the stuff of melodrama, she made of it a tale of outcast lovers braving the world’s contempt for the sake of a great passion. Four lives were destroyed in the process, but whatever remorse she may have felt she clung to her illusions to the end. I tried to help but she deflected me from the truth until it was too late. She had to. She couldn’t afford to let me see it clearly, it would have been the ruin of the few flimsy psychic structures she had left.

Stella was married to a forensic psychiatrist called Max Raphael and they had a son, Charlie, aged ten when all this happened. She was the daughter of a diplomat who’d been disgraced in a scandal years before. Both her parents were dead now. She was barely out of her teens when she married Max. He was a reserved, rather melancholy man, a competent administrator but weak; and he lacked imagination. It was obvious to me the first time I met them that he wasn’t the type to satisfy a woman like Stella. They were living in London when he applied for the position of deputy superintendent. He came down for an interview, impressed the board and, more important, impressed the superintendent, Jack Straffen. Against my advice Jack offered him the job, and a few weeks later the Raphaels arrived at the hospital. It was the summer of 1959 and the Mental Health Act had just been passed into law.

This is a desolate sort of a place, though God knows it’s had the best years of my life. It is maximum-security, a walled city that rises from a high ridge to dominate the surrounding country: dense pine forest to the north and west, low-lying marshland to the south. It is built on the standard Victorian linear model, with wings radiating off the main blocks so that all the wards have an unobstructed view across the terraces to the open country beyond the Wall. This is a moral architecture, it embodies regularity, discipline, and organization. All doors open outward to make them impossible to barricade. All windows are barred. Only the terraces, descending by flights of stone steps to the perimeter wall at the foot of the hill, and planted with trees, grassy banks, and flower gardens, soften and civilize the grim carceral architecture standing over them.

The deputy superintendent’s house is just a hundred yards from the Main Gate. It is a large dark house of the same gray stone as the hospital, set back from the estate road and hidden by pine trees. It was much too big for the Raphaels, having been built at a time when doctors came with large families and at least two servants. For several years before their arrival it had stood empty, and the garden was neglected and wild. To my surprise Max took an immediate interest in its rehabilitation. He
had the goldfish pond at the back of the house cleaned out and restocked, and the rhododendron bushes around the edge of the lawn cut back and made to flower.

The project that most interested him however was the restoration of an old conservatory at the far end of the vegetable garden. This was a large ornate glasshouse built in the last century for the cultivation of orchids and lilies and other delicate tropical plants. In its time it had been an imposing, airy structure, but when Max and Stella arrived it was in a state of such disrepair there was talk of pulling it down. Much of the glass was broken and what panes remained were thick with dust and cobwebs. The paintwork had flaked off and the woodwork in places was rotted and splitting. Birds had nested inside it, mice and spiders had made their home there, weeds had sprouted through the cracks in the stone floor.

But Max Raphael had an affection for all things Victorian, and the exotic architecture of this garden conservatory, with its intricate glazing and joinery, and the graceful Romanesque arches of its windows, all this gave him peculiar delight. He was fortunate that among the hospital’s parole patients was a man confident that he could do the work of restoring the conservatory. This was the sculptor Edgar Stark.

Edgar was one of mine. I have always been fascinated by the artistic personality, I think because the creative impulse is so vital a quality in psychiatry; certainly it is in my own clinical work. Edgar Stark was already influential in the art world when he came to us, though what we first saw was a confused and very shaky man who shuffled into the hospital like a wounded bear and sat hunched on a bench for hours with his head in his hands. He intrigued me from the start, and once I’d settled him down and got him talking I discovered him to be a forceful individual with an original mind, and I also realized that he was possessed of considerable charm, when he chose to use it. He and I quickly came to enjoy a warmly combative relationship, which I encouraged, up to a point; I wanted him to feel he had a special relationship with his doctor.

At the same time I was wary of him, for his was a restless,
devious intelligence. He was quick to grasp the workings of the hospital and always alert to his own interest. I knew I could rely on him to exploit any situation to his own advantage.

Oddly enough I saw him with Stella only once, and that was at a hospital dance, a year after the Raphaels arrived here and just three weeks after he began working for Max in his garden, around the beginning of June. Dances are important events in the hospital calendar and there is always much excitement beforehand. They take place in the Central Hall, a spacious high-ceilinged room in the Administration Block with a stage at one end, a line of pillars down the middle, and casement windows opening onto the top terrace. Soft drinks and sandwiches are spread on long trestle tables at the back, and the band sets up onstage. Parole patients from both the male and female wings of the hospital may attend, and for this one evening they and the staff become an extended family without distinction of rank or status.

This at least is the idea. The truth is, the mentally ill are not at their best at a dance. Our patients dress eccentrically and move awkwardly, handicapped as much by the medication they take as by the illnesses that make the medication necessary. Despite the energetic efforts of the hospital band, and the contrived high spirits of the staff, I have always found it a poignant affair, and attend out of duty rather than in anticipation of any pleasure. That night, as I watched the proceedings from the shadow of a pillar at the rear of the Hall, I was not surprised to see Edgar Stark approach the deputy superintendent’s wife, nor to see her step out onto the floor with him. The band went into something quick and Latin and she darted away in his arms.

Until recently I didn’t learn precisely what happened next. Perhaps I should have guessed that something was wrong, for I noticed her becoming slightly flushed. I watched them move briskly across the floor, passing directly in front of the superintendent’s table, and it is only now that I recognize just how bold, and bald, and reckless was the insult Edgar flung in our faces that night.

The dance ended promptly at ten and the patients filed out
noisily. Jack asked those of his senior staff remaining in the Hall to come back for a drink. I strolled along the top terrace with Max, both of us in dinner jackets and both smoking good cigars as we chatted about various of our patients. The sky was clear, the breeze warm, and the world spread beneath us, the terraces, the Wall, the marsh beyond, all was dim and still in the moonlight.

Stella’s voice drifted clearly back to us on the warm night air. Oh, I have known many elegant and lovely women, but none matched Stella that night. She was in a low-cut black evening dress of coarse ribbed silk, an exquisite grosgrain I had never seen before. The neckline was square and showed the curve of her breasts. It clung to her body then belled from the waist, scooped in a fold over each knee like a tulip, with a split between. She was wearing very high heels and a wrap thrown loosely about her shoulders. She was asking Jack about her last dance partner, and as I heard my patient’s name I glimpsed again in my mind’s eye the shuffling men and women in their ill-fitting clothes, something subtly askew about all of them except him.

Jack was standing at the end of the terrace, holding open the gate for Max and me. Stella was clearly amused at the sight of two consultant psychiatrists in dinner jackets hurrying so as not to keep their superintendent waiting. A minute or two later we were in the Straffens’ drawing room and the phone was ringing. It was the chief attendant, to tell the super that everyone was present and accounted for and the hospital was safely locked up for the night.