Read At the Edge of the World Online

At the Edge of the World

BOOK: At the Edge of the World
>>DOWNLOAD HERE >>READ ONLINE NOW
ads 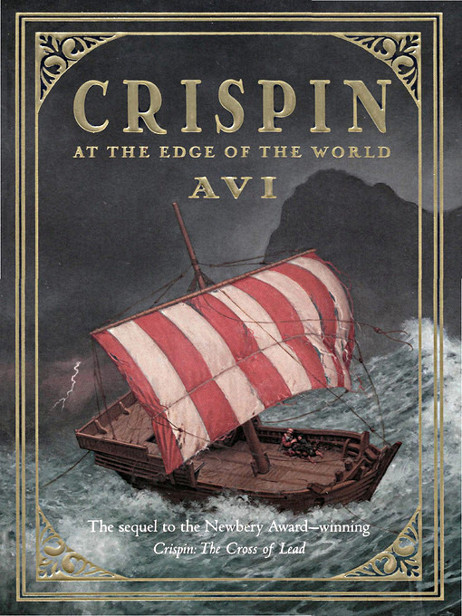 AT THE EDGE OF THE WORLD

A 2006
Child
Magazine Best Book of the Year

*“A must purchase.”—
KLIATT
(starred review)

*“Plenty of action and adventure … will make fans eager for the final
installment.”—
Booklist
(starred review)

“This thrilling page-turner has an open-ended conclusion that will leave
youngsters hungering for the third book.”—
VOYA

“A perilous, riveting journey across land and sea …”—
Child
Magazine

THE CROSS OF LEAD

A
Seattle Times
Best Book of the Year

If you purchased this book without a cover, you should be aware that this book is stolen property. It was reported as “unsold and destroyed” to the publisher, and neither the author nor the publisher has received any payment for this “stripped” book.

Published by Hyperion Paperbacks for Children, an imprint of Disney Book Group. All rights reserved. No part of this book may be reproduced or transmitted in any form or by any means, electronic or mechanical, including photocopying, recording, or by any information storage and retrieval system, without written permission from the publisher. For information address Hyperion Books for Children, 114 Fifth Avenue, New York, New York 10011-5690.

Go to
www.hyperionbooksforchildren.com
to download
the discussion guide and author interview for
Crispin: At the Edge of the World.

The more I came to know of the world,
the more I knew I knew it not.

I
T
WAS A JUNE MORNING
when Bear and I passed beyond Great Wexly’s walls and left the crowded and treacherous city behind. The June sun was warm, the sky above as blue as my Blessed Lady’s spotless robe; our triumphant sense of liberty kept me giddy with joy. Hardly able to contain myself, I more than once cried out, “My name is Crispin!” for all the world to hear.

I carried Bear’s sack, which contained little more than his music-making recorder and his fire-making tools, plus the few pennies we had eked out with our music and dance. His juggler’s double-pointed hat, replete with bells, was the glorious crown that capped my head.

At first we sang, played music, and stepped lightly while thanking Jesus profusely for our deliverance. What more, I thought, could my newly found soul require?

Yet though our spirits were as high as any cloud-leaping lark, it became increasingly clear that while the dungeon from which I’d freed Bear had not broken his soul, it had greatly reduced his strength. Indeed, as the day waxed he seemed to wane. More and more he leaned on me. Unshod feet had him limping. Though it was summer, his garment—no more than an old wool cloak—left him in need of warmth.

By midmorning, when our exuberance had all but ebbed, I said, “Bear, I think we need to find a place for you to rest and eat. And some decent clothing.”

He shook his great, red-bearded head. “Crispin, we can’t rest. Not yet.”

“I’m afraid,” he growled, “the most lethal of all sleep potions is success.”

“What does
that
mean?”

“We’ve escaped. But don’t doubt it, we’ll be pursued. I’m as easy to find as a cardinal in a flock of ravens. And there are many now who would like to catch me.” Bear had been a spy for John Ball’s secret and illegal brotherhood, which sought to regain people’s ancient liberties. It meant he had many enemies.

I did too—for different reasons.

Bear’s words so reined in my good spirits that I looked about with apprehension. We were traveling on a deep-rutted, muddy track that ran as straight as any arrow. “Made by Caesar’s great legions,” Bear had told me. To one side lay thick forest. The other side was open, hilly land. Bear’s warning made me wonder if those who wished us harm might crest the horizon at any time.

True, we had passed many a plodding peasant and footsore pilgrim, with scallop badge over heart and staff in hand. There had been fat merchants aplenty too, on thin horses, likely heading to the fair at Great Wexly. Though I had spied no one who alarmed me, quite naturally, they had gazed upon Bear. For God had made Bear a huge fellow with massive arms and legs and a great belly before all. His bald head was equally striking to behold, with great red beard, fuzzy eyebrows of the same hue, large nose and mouth, if small eyes. To see Bear was to know why he bore the name of beast—and yet, most surely he was a man, and one not likely to go unnoticed.

We had come upon some scattered houses, cottages, huts, and even an old, abandoned church. Perhaps a village had been there, but time or sickness had turned it to all but naught.

As I looked about, I spied a house from which a broom hung. I recognized it as an alestake: those within had brewed more ale than they could keep and the broom was set out as a signal to tempt passersby to purchase. My hope was that there would be bread as well.

“Bear,” I said, pointing to the alestake, “look! The food and drink should be cheap. It will do you good.”

“We’re still too near Great Wexly,” he cautioned.

“It will take only moments,” I coaxed.

Bear considered, and then said, “As you wish,”—words, no doubt, called forth by his exhaustion. So it was we turned our steps off the road.

The house was large, a half-timbered structure with a few small and shuttered windows, its roof thick-thatched. Noting the tilled fields just behind, I supposed a free yeoman dwelled within. In the foreyard, geese strutted, clucking and hissing at one another. An old wooden trestle table had been set out, along with benches suggesting the dwellers offered food with some regularity. Just the thought made my stomach speak with hunger.

Upon reaching the house, Bear dropped heavily on a bench set to one side of the door. Right off, he shut his eyes and set his face toward the warming sun. It was, I realized, the first time since he’d been arrested in the city that he had been at ease.

Glad of it, I went to the split front door and rapped upon it.

In answer to my summons, the top part of the door opened a crack. A dark eye peered out. I must have been judged no threat, for the next moment the door swung wide.

The man who revealed himself was a broad-shouldered, powerfully built fellow of middling age, with long, ill-sheared black hair. A few days’ growth of beard made his scowling mouth appear grim. Over his kirtle he wore the leather vest of an archer. The first and second fingers of his right hand were extra muscled and callused from—I assumed—pulling a bowstring to his ear. He looked vaguely familiar, but I was unable to claim him in my memory.

“Good morrow to you, boy,” he said, although his
voice
carried little welcome. Moreover, he frowned so that his brow became as beetled as a well-plowed field.

“And to you, sir,” I returned. “If it pleases, I saw your alestake. I’d like to purchase bread and drink.”

“Have you anything to pay?” the man asked. His eyes squinted as if to take my measure, or his aim.

“Enough,” I replied, “for me and my foot-weary master.”

“What master?” he demanded.

Not bothering to look, the man muttered something that sounded like a curse as he withdrew into the darkness of his house.

How good it was to rest. Bear remained on his bench, eyes closed, face turned to the sun’s kind heat. I took myself to the table where I sat, head in my arms. As I had not slept for two days, a surge of weariness swept through me.

The man returned, kicking open the lower door with a
thud
loud enough to make me sit up. Only then did I note the sheathed dagger that hung upon his hip. Not that I cared: he was carrying two wooden mazers full of drink, and barley bread was tucked under his arm.

The man set the mazers down and dropped the bread. “Where’s your master?” he demanded.

“Right there,” I said, nodding toward Bear.

The man turned round—and started. “By the wounds of Christ!” he cried when he saw Bear. “It’s you!”

334 by Thomas M. Disch
Buried in the Past by Bill Kitson
The Tiger's Baby: A Paranormal Pregnancy Romance by White, Jade
The Bullet Trick by Louise Welsh
REIGN: A Motorcycle Club Romance Novel by Jackson, Meg
How Hitler Could Have Won World War II by Bevin Alexander
Warburg in Rome by James Carroll
The Dominator by Prince, DD
Highland Mist by Rose Burghley
Violation by Lolah Lace
Our partner