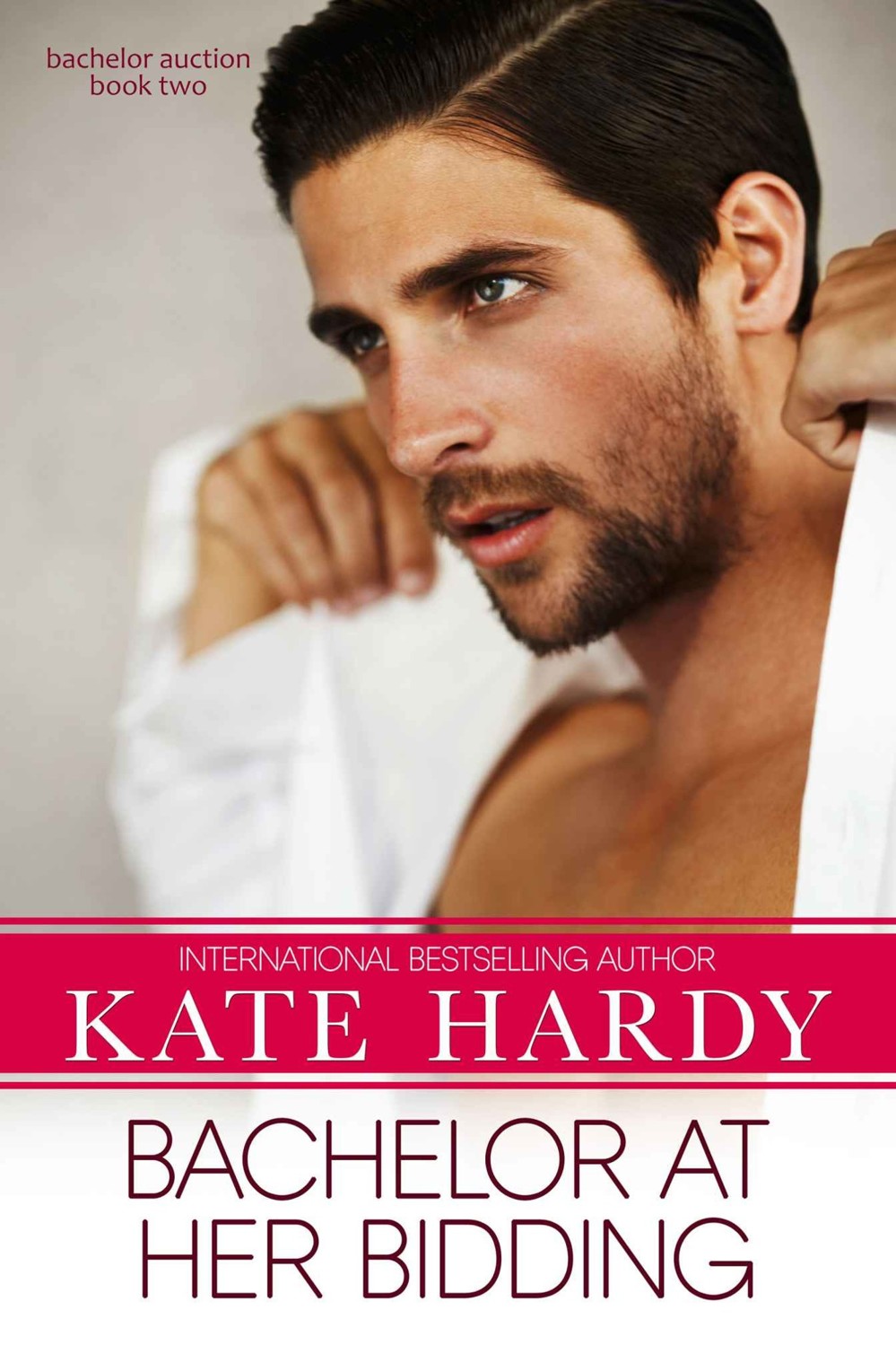 Bachelor at Her Bidding

Bachelor at Her Bidding

“R
yan Henderson.
Just
the man I was looking for.”

Ryan knew that drawl well. Lily Taylor was one of the regulars at Grey’s Saloon, and he enjoyed flirting with her as much as she enjoyed flirting with him – because both of them knew there was no chance of them being anything other than friends. Gorgeous as Lily was, Ryan wasn’t in the market for a relationship. Not now, and not for the foreseeable future.

But a friend was another matter. He could always do with a friend.

And he liked Lily Taylor. A lot. She was smart, sassy, and told it to you straight. He knew she was a favorite with Reese Kendrick, the laconic saloon manager, too – or she wouldn’t have been allowed back here in the kitchen. If anyone else had thought about coming back here, one look from Reese would’ve kept them on the other side of the bar.

Ryan looked up from the huckleberry pies he was making and smiled at her. “What can I do for you, Lily?”

“It’s about the Bachelor Auction on Saturday night.”

“The fundraiser for Josh Dekker, you mean?” The poor kid had been in a bad fall on Copper Mountain three months ago, and after he’d been airlifted to hospital the medics had discovered that Josh had a spinal cord injury, leaving him in a wheelchair. Molly, Josh’s mother, was a single parent; she was struggling to get the care her boy needed, let alone trying to meet the cost of refitting the house to meet Josh’s needs. Lily, as Josh’s godmother, had gone straight into action and organized a fundraiser to help.

“Reese has already talked to me about the food,” Ryan said, “but I’m happy to run the menu by you and tweak it if you need me to.” He grinned. “And – before you ask – yes, of course I’m making red velvet cheesecake. Especially for you.”

“Good boy.” Lily gave him a sultry look and flicked her long dark hair out of her eyes. “But it’s not the menu I want.” She paused for effect. “It’s
you
.”

“Me?” Ryan looked at her, perplexed. He was just the cook. If she didn’t want to talk about the food for Saturday night, what on earth did she want with him?

The question must’ve shown on his face, because she said, “As one of my bachelors.”

She wanted to auction him?

Ryan was more than happy to do his bit to help with the fundraising, but being auctioned off was something he most definitely wasn’t up for doing. “Whoa, there.” He lifted both floury hands in a “stop” gesture to back it up. “I can’t do that, Lily. What I
can
do is make you all the cakes you want – stuff you can auction off after you’ve done the bachelors.”

She gave him a pointed look, and he groaned as he realized what he’d said and how it could be taken. “You know I didn’t mean it like
that
.” Lily’s past had made some of the smaller minds in town snub her. But the people she allowed to know her well enough all knew that the ex-stripper had a heart of purest gold. Not to mention a smart mouth that could put down anyone faster than they could try to put her down. And watching Lily Taylor in full flow could be a lot of fun.

“Well now, Ry. I’m thinking you owe me for that one,” she drawled.

“You’re a bachelor, right?” She hoisted herself up on to a clean area of the counter – something that nobody else but Lily would’ve dared to do – and crossed her legs.

Ryan couldn’t argue with her assessment. “Right.” But he could argue about something else. “I don’t date. I don’t have
time
to date.” When he wasn’t working at Grey’s, he was looking after Phyllis, his grandmother. And that wasn’t negotiable.

“If you weren’t so stubborn and ornery about it,” Lily said, “you know we’d have a rota of people to sit with Phyllis like a shot. She’s a legend.”

He knew that. His grandmother had been one of the most popular teachers in her years at the high school, always willing to spend time in her breaks or after school with someone who was struggling with math and helping them to get it. Her old colleagues from the high school dropped in to visit with her regularly – history teachers, Gemma Clayton and Chelsea Collier, who’d once been her pupils; vice principal, Kate Pearce; and even principal, Sharla Dickinson. They’d all told Ryan they’d be happy to sit with Phyllis for an evening – or any time during the day, out of term time – to give him a break from looking after her.

But Ryan wasn’t the sort to dump his responsibilities on other people, no matter how well-meaning they were.

“Yes, she’s a legend,” he agreed softly. “And she’s my responsibility.” Ryan was the only family Phyllis had left. She’d taken care of him when he’d needed her most; and now it was his turn to repay that favor and take care of his grandmother when she needed him most. He wasn’t going to let her down.

Lily sighed. “Ry, I know the situation at home. And I wouldn’t ask you to do something like this ordinarily.”

No. She would’ve just negotiated twice as many desserts as he had time to make. And for her he would’ve made the time to do it. “But?”

“Someone’s dropped out. I have two days to find a replacement bachelor. I need you.” She looked at him with those big, dark pansy eyes. “Josh and Molly need you.”

Ah, hell. How could he resist an entreaty like that?

“Please?” she wheedled, tipping her head to one side.

How did she make her eyes look so huge? Like the cutest kitten or puppy. One you couldn’t say no to. God help whoever she settled down with, if they had a couple of little girls like her. They’d wrap their father round their little fingers with a single one of those looks. “I…”

“One date. That’s all I’m asking for, Ry. One little package.”

Now he was on safer ground. “You won’t get very much if you auction me off.”

“Now that,” she said, “is where you’re wrong. Each bachelor is offering something special. Something unique.”

And, for the amount of money they needed to raise for Josh, each bachelor was going to be offering something expensive. Ryan had heard the rumors in town about what was going to be on offer, including a helicopter ride. Way, way out of his league. “Which is why I’m the wrong person to ask. I’m not a billionaire and I don’t have anything to offer.”

“No?” She gave him the sweetest smile. “Everyone in town knows your food is almost better than sex.”

“Almost?” he deadpanned, though he couldn’t help laughing. Lily always made him smile for the right reasons. She was one of those people who made your world feel brighter just by being there.

“It’s a close-run thing.” She spread her hands. “One night, Ry, that’s all I’m asking. And I’ll make sure Phyllis has someone with her for every second that you’re away, I promise.”

“And what does this one night consist of?”

“Dinner for whoever bids for you. Cooked by you. Some of that fancy stuff you learned in Paris.”

His cordon bleu training in France seemed a lifetime away now. Ryan stuffed down the longing before it had a chance to take hold. Family came first and it always would. His dreams could wait a while longer.

“And where am I going to cook this fancy dinner?” he asked.

She shrugged. “That’s between you and your bidder.”

“One night. One dinner.” He paused. “OK. I’ll do it. On the strict proviso that if whoever sits with Gram has even the
slightest
worry about her while I’m out cooking this dinner, they call me immediately and I get to go home straight away.”

Soft as butter and just as soft in the head, according to Lucille, his ex.

“How can you think of giving up our business venture to look after your grandmother? You’re not a nursemaid. You’re supposed to be a chef.” The contempt in Lucille’s eyes as she’d spoken had made Ryan feel sick – how had he got so deeply involved with such a cold, selfish woman?

He pushed the memory away and tried to enjoy Lily’s innuendo instead. “Yeah, yeah.”

Both hands were covered in flour and she didn’t want to get her clothes dusty. “A kiss would do,” he teased.

“No chance. There’s flour on your face, too.”

No, there wasn’t, but he let it pass. He and Lily weren’t kissy-kissy in any case.

She looked at the wire rack where a batch of red velvet cupcakes were cooling. “I think one of those will do nicely.” She gave him a saucy wink, hauled herself off the counter, filched a cupcake and sashayed out of the kitchen. At the door, she paused. “I’ll call you with the details. And thank you, Ry. I appreciate it. So will Josh and Molly.”

“It looks as if you,” Reese Kendrick said with a laconic smile as he walked into the kitchen, “have just been railroaded into something.”

Auctioned off. One night. One dinner. With some unknown woman who could afford to buy his time.

OK. He could do this. Just for one night. For Josh and Molly’s sake.