Read Back to Battle Online

Tags: #Back To Battle 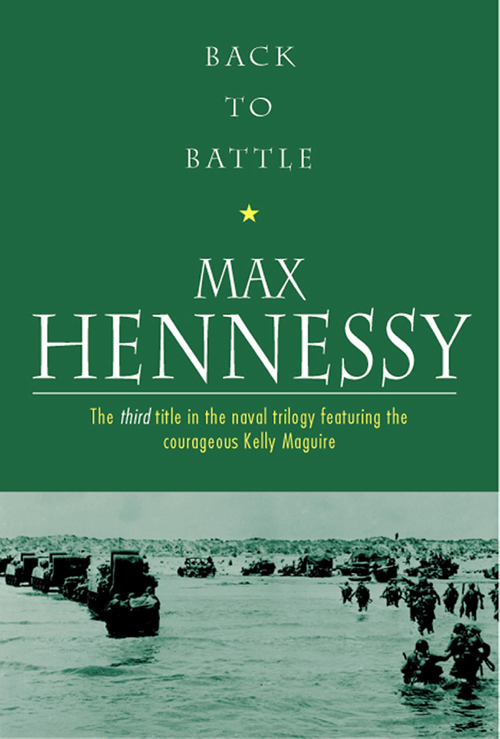 The right of Max Hennessy (John Harris) to be identified as the author of this work has been asserted.

John Harris, wrote under his own name and also the pen names of Mark Hebden and Max Hennessy.

He was born in 1916 and educated at Rotherham Grammar School before becoming a journalist on the staff of the local paper. A short period freelancing preceded World War II, during which he served as a corporal attached to the South African Air Force. Moving to the Sheffield Telegraph after the war, he also became known as an accomplished writer and cartoonist. Other ‘part time’ careers followed.

He started writing novels in 1951 and in 1953 had considerable success when his best-selling
The Sea Shall Not Have Them
was filmed. He went on to write many more war and modern adventure novels under his own name, and also some authoritative non-fiction, such as Dunkirk. Using the name Max Hennessy, he wrote some very accomplished historical fiction and as Mark Hebden, the ‘Chief Inspector’ Pel novels which feature a quirky Burgundian policeman.

Harris was a sailor, an airman, a journalist, a travel courier, a cartoonist and a history teacher, who also managed to squeeze in over eighty books. A master of war and crime fiction, his enduring novels are versatile and entertaining.

Characters who also appeared in the two previous books of the trilogy.

The Atlantic was always moody and September storms had blown up from nowhere so that the great grey rollers had smashed constantly against the cliffs round Cape Trafalgar. Today, however, the sea was calm, with a soft north-westerly wind bringing up cloud that dropped a gauze veil along the coast. For once the sea looked sluggish and, as it nibbled at the land, in the villages of the Algarve and round Cadiz the fishermen began to prepare their gaudy trawlers and load them with the chocolate-coloured nets.

Off the coast to the east of Tarifa, the two ships were lifting and rolling gently to the slow undulations of the swell and as the destroyer, Badger, came round towards them, leaning to the sea, Commander George Kelly Maguire lifted his glasses and settled himself to study them. Behind him on the bridge, Badger’s commanding officer, Lieutenant-Commander Arthur Smart, waited for instructions, ready to act on them at once because he knew Kelly Maguire, and Kelly Maguire was known throughout the Navy for his lack of hesitancy; even the crisp red hair beneath his cap seemed to indicate a quick temper and a no-nonsense attitude to his job.

Badger’s bows lifted as she thundered towards the two ships in the distance. Laid down in 1931, she was relatively new and her 1,400 tons clove the water at her full thirty-five knots. After the eighteen years of peace in Europe since 1918, cruises off the coast of Spain were no longer steamed at ‘economical speed’ but at ‘full speed,’ because a civil war had broken out in the Iberian peninsula and British ships were being threatened. Her decks cleared for action, her 4-inch guns and torpedo tubes manned, she had come at racing speed through the Straits of Gibraltar at the squawk for help they’d heard on their radio, the thin quivering hull pitching into the swell in a spray-drenched salt-sticky wetness.

Every eye was on the two ships ahead. The farther of the two was a small coaster, high sterned with a funnel like a Woodbine. She was about 8,000 tons and ancient, and she looked grubby and ill-found, with joints that creaked and groaned in heavy weather. Down below, the engine room crew laboured in gloomy caverns painted rust-brown for cheapness, and stinking of damp, coal dust and the bushy-tailed rats that infested her. Her cabins would be the same – brown-black with age, and as cramped, ugly and narrow as her alleyways.

‘That her?’ Kelly Maguire lifted his glasses again and settled himself to study her.

‘That’s her, sir. ‘The answer came quickly. ‘Jeb el Aioun. Plies regularly between French Morocco and Gib. She was Spanish but since the Civil War she’s been registered as British. Owned by Barbes and Co., Gibraltar.’

Placing his elbows on the bridge coaming, Kelly stared for a long time at the old ship. Then he shifted position and turned the glasses on the nearer vessel. She was also unprepossessing, with tall old-fashioned stacks that made her cruiser stern seem curiously anachronistic, and sides that were rust-streaked and dirty-looking. Alongside Jeb el Aioun, however, she looked like the Fairy Queen.

‘I’m glad we don’t call our ships after writers.’

The navigating officer decided to show his literary knowledge. ‘How about Oscar Fingall O’Flahertie Wills Wilde?’ he suggested.

He’d expected Kelly to laugh but, still leaning on the bridge coaming, his glasses on the Spanish ship, Kelly was concentrating, and the smiles died. As one of the most decorated officers in the Royal Navy, ‘Ginger’ Maguire was used to a great deal of respect, especially since he was also considered to be a little ‘regimental’ at times. They all knew his reputation. Decorated for the first time in 1911 for saving life, he had never seemed to stop gathering gongs even during the drab years since the Great War when there’d been remarkably little opportunity for anybody to distinguish themselves anywhere. But it wasn’t just the ribbons that graced his breast, which gave him his reputation; there was a hard core of technical knowledge under the gold-laced cap, and the steely grey eyes missed nothing, and they all knew it.

In a period when big ships and big guns – despite their repudiation before his death by Jacky Fisher, the man who had created them – still remained the sworn credo of the Royal Navy, and the specialists who manned them were in the ascendant, many small ship men had been condemned because they didn’t fit the standard pattern. And Kelly Maguire, who had always been a confirmed and unabashed destroyer man, had been left behind a little by the gunnery, signal and torpedo experts who had gained their distinction solely by serving in the monolithic vessels about which he was so often virulently expressive. Since the beginning of the Spanish Civil War that July of 1936, however, he seemed to have found his feet again, because the sea round Spain was suddenly a place where unhesitant decisions were demanded and there was nobody better at that than Kelly Maguire.

Although the British government still appeared unable to make up its mind what its attitude ought to be towards the two belligerents, the navy had always seen its duty quite clearly and its work these days consisted chiefly of protecting British interests, evacuating British subjects and acting with strict neutrality. Ships had spent their time lifting Socialists from the Balearics, which were under the fascist flag and Fascists from Catalonia, which was held by the Socialist Spanish Government, so that they were constantly in the front row of the stalls when it came to viewing the fluid and vicious struggle ashore.

And, as often as not, Kelly Maguire had been there to handle the arrangements. He spoke fluent French, some German and Italian and, after two years in Gibraltar, solid if uninspired Spanish, and when the request for help had come, his had been the name that had sprung to the mind of Rear-Admiral Cuthbert Corbett, Chief Staff Officer (Intelligence), Gibraltar.

He studied the Spanish ship again, the limp red and black flag at her mast-head, the cluttered decks and the men between the guns watching Badger as she pounded up, a white wash of foam at her bows. He didn’t have a very high opinion of Spanish warships; so far they seemed good only at bombarding defenceless towns.