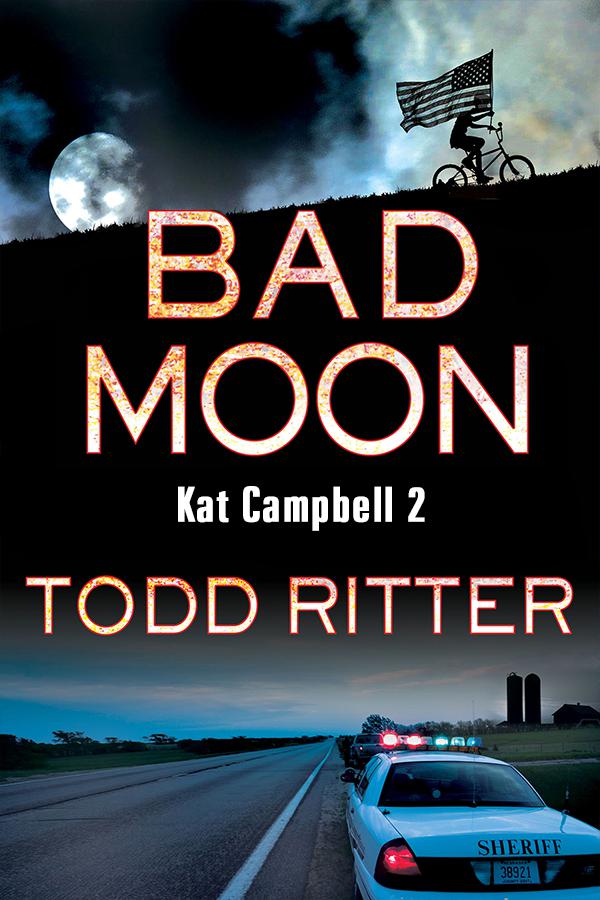 On the same night that Neil Armstrong became the first man to walk on
the moon, ten-year-old Charlie Olmstead jumped on his bike to see if
there was some way he could get a better look. It was the last anyone
ever saw of him.
After Perry Hollow Police Chief Jim Campbell found Charlie's bike caught in the water above Sunset Falls, he assumed the worst. Everyone did -
except Charlie's mother.
Years
later, Eric Olmstead - now a famous author and Charlie's younger
brother - has come back to Perry Hollow to bury his mother and fulfill
her last request:
Find Charlie. To do so, he goes to the current
police chief, his former sweetheart, Kat Campbell, who happens to be Jim
Campbell's daughter.
Together they soon discover that Eric's mother
was convinced Charlie was kidnapped, and that finding him - whether he
was dead or alive - was her secret obsession.
While she never
succeeded, she did uncover clues that suggested he wasn't the only boy
across Pennsylvania to vanish into thin air during that time.
The
haunting story of a boy missing for forty years, and of a small town
that found lies easier to believe than the truth, explodes into the
present in
Bad Moon
, Todd Ritter's excellent follow-up to his acclaimed debut. 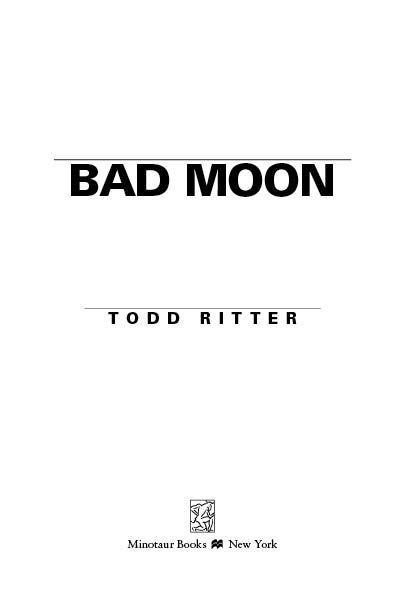 It was the baby, of all things, that woke her up. Not her husband. Not the police. Just the baby and his crying.

Maggie had grown accustomed to the sound. Having two kids did that to you. Sometimes she’d accidentally sleep right through whatever racket one of them was making. But that night was different. The crying was different. It wasn’t the irritated wail of an infant who was tired or the pained whimper of one who was teething. It was, Maggie realized, a cry of terror, and the noise tugged her out of sleep, out of bed, and out of the room.

Along the way, her bleary eyes caught the clock on her dresser. It was almost eleven. She had been asleep for more than three hours. Not as bad as some days, but not good, either. Not good at all. And despite the rest, she still felt weary as she crossed the hall to the nursery. Still utterly exhausted.

In the nursery, Maggie flicked on the overhead light. The sharp, sudden glow made her eyes sting in addition to being bleary. It didn’t matter. She could navigate the room with her eyes closed, which is exactly what she did. The memories of hundreds of similar trips guided her—rocking chair to the right, dresser to the left, don’t stub your toe on the toy chest. Once she reached the crib, Maggie opened her eyes.

The crib was empty.

The crying, however, continued.

Maggie heard it, loud and fearful. She rotated in the center of the room, looking for a possible explanation. Had the baby somehow escaped the crib and crawled into the closet? The dresser? Another room?

It was only after two more twirls that Maggie’s sleep-addled mind caught up with her spinning body. When it did, she realized the source of the crying wasn’t in the nursery at all. It was coming from downstairs and had been the entire time. Only now it sounded more urgent, more frightened.

Maggie left the nursery and clomped down the stairs. At the bottom, she expected to see Ken reclining in the living-room La-Z-Boy, the baby wriggling in his arms. Instead, the chair was occupied by Ruth Clark, whose spindly arms struggled to stay wrapped around the writhing child.

Ruth, who was only sixty but looked at least a decade older, lived down the street. She and Maggie were friends, but not friendly enough for Ruth to be in her house, holding her child, at almost eleven o’clock at night. Yet there she was, trying to hush the baby in the gray glow of the television.

“Ruth? What’s going on?” Blinking in confusion, Maggie noted what her neighbor was wearing—a nightgown stuffed into threadbare trousers, flip-flops on her feet. She had dressed in a hurry. “Where’s Ken?”

“You were asleep,” Ruth said with forced cheer. “So he asked me to come over and keep an eye on the baby. He had to step out for a minute.”

Ruth stayed silent as she pressed the baby into Maggie’s arms. He had been wrapped tightly in a blanket, which covered everything but his face. Whether it was Ken’s doing or Ruth’s, Maggie didn’t know. Either way, it was a bad move on such a muggy night. Both the baby and the blanket were drenched with cold sweat, which explained the bawling.

The crying softened once Maggie settled onto the couch and loosened the blanket. Ruth sat next to her, uncomfortably close. She was hovering, Maggie realized. And watchful.

“Did Ken say where he was going?”

“What about when he’d be back?”

“I’ll wait up for him. You don’t need to stick around.”

“I think I should stay.”

Maggie didn’t have the energy to protest, not that Ruth would have allowed it. The finality of her tone made it clear she intended to stay. With nothing left to say or do, Maggie stared at the television.

What she saw astounded her.

The screen was mostly a grainy blur—fizzy patches of black and gray. Then an image took shape through the haze. It was a figure in a bulky uniform, looking like a ghost against a background of endless darkness. The figure was on a ladder, hopping downward rung by rung.

It paused at the bottom. It placed a foot onto the ground. It spoke.

“That’s one small step for a man, one giant leap for mankind.”

He
was Neil Armstrong.
It
was the moon. And Ruth was correct—the astronaut was standing on its surface just as easily as Maggie now sat in her living room.

Eyes fixed on the TV, she immediately thought of Charlie. Nine years older than the baby, he had been moon crazy the past year. Earlier that afternoon, when
Apollo 11
actually touched down on the moon’s surface, Charlie had cheered, jumped, and cried until he made himself sick.

He would want to see this, Maggie knew. History was taking place.

Ruth trailed her to the stairs. “Maggie, wait!”

Maggie didn’t stop, continuing up the stairs with rushed purpose. At the top, her bare feet made slapping sounds on the hardwood floor as she moved down the hall to Charlie’s bedroom. Ruth remained downstairs, calling up to her.

“Please come back! Charlie’s not there!”

Maggie stopped, hand against the closed bedroom door. “What do you mean?”

Maggie did the opposite, pushing into the room instead. The streetlight outside the window cast a rectangle of light that stretched across the floor. Just like in the nursery, she didn’t need it. She knew every inch of the bedroom, from the telescope in the corner to the model rockets lined up on the bookshelf.

The window was open, letting in a rainy breeze that dampened the curtains. Beneath it was Charlie’s bed, draped in a comforter dotted with moons, stars, and planets. Holding the baby with one arm, Maggie used her free hand to lift the comforter and whip it away.

The bed, much like the baby’s crib earlier, was empty.

“Where is he? Did Ken take him somewhere?”

Ruth moved into the room and tried to clasp her hand. Maggie yanked it away. “Answer me, Ruth. Where is my son?”

But Maggie did. She understood quite well as she shuffled backward and plopped onto the empty bed. The bed that should have contained Charlie. Her boy. Whose whereabouts were now unknown.

“Is that where Ken went? To look for him?”

“He called the police,” Ruth said. “Then he woke me and Mort.”

Mort was Ruth’s husband. Maggie presumed he was also looking for Charlie, along with the police and God knows who else. Apparently everyone but her knew her son was gone.

“Ken didn’t think you’d wake up. And if you did, he knew you’d be worried.”

Damn right she was worried. Her body might have been motionless on her son’s bed, but her mind was a whirling dervish of fears and bad thoughts. Where was Charlie? How long had he been gone? Was it too late to find him? When Maggie’s brain settled down, her body started up again. She rose from the bed and stomped past Ruth into the hallway.

Again, Ruth tried to stop her. “I’ll take the baby.”

Maggie tightened her arms around the infant. One of her children was missing. She wasn’t going to let the other out of her sight until he was found.

She descended the stairs into the living room. The TV was still on, still broadcasting surreal pictures from another world. A second astronaut had joined Armstrong, both of them leaping like jackrabbits across the moon’s surface. Maggie moved right past it, not caring. Her only concern was her children, not the moon, or the astronauts, or the fact that she was running outside in the rain in bare feet, denim cutoffs, and a T-shirt stained with baby puke.

She made it to the end of the driveway before seeing two men approach the house. One of them was Ken. The other was Mort Clark. Maggie looked past them, hoping to see Charlie lagging behind. He wasn’t.

“Did you find him?” Maggie asked as she met them in the middle of the street. “Where is he?”

He looked pale and haunted—more ghostlike than those astronauts on TV. The rain had flattened his hair. Large drops of it clung to his beard.

“We were watching TV,” he said. “They were showing stuff about the moon landing and Charlie said he wanted to go for a bike ride and look at it. He said he thought he’d be able to see the astronauts from here.”

It was a ridiculous notion, but very much in line with Charlie’s thinking. Maggie easily pictured him hopping on his bike—midnight blue with badly painted stars—and pedaling off in excitement.

“How long ago was that?”

One of Charlie’s favorite places was the creek that rushed through the woods behind their cul-de-sac. There was a dirt path there, perfect for biking, that led to a footbridge. From that perch, you could see the water hurtle over Sunset Falls, which plunged thirty feet into a rock-strewn pool. They had allowed Charlie to ride there alone for the first time this summer. Maggie now regretted that decision.

The Science of Yoga: The Risks and the Rewards by William J Broad
Stolen by Jalena Dunphy
Chef's Delight (Stories of Serendipity) by Anne Conley
Tales of the Djinn: The Double by Emma Holly
Diamond in the Rough (Diamond J #2) by Lori L. Robinett
El cartógrafo y el misterio del Al-kemal by Frank G. Slaughter
Murder In Chinatown by Victoria Thompson
Submit to Sin by Nicolette Allain
Xaraguá by Alberto Vázquez-Figueroa
We Can Be Heroes by Catherine Bruton
Our partner