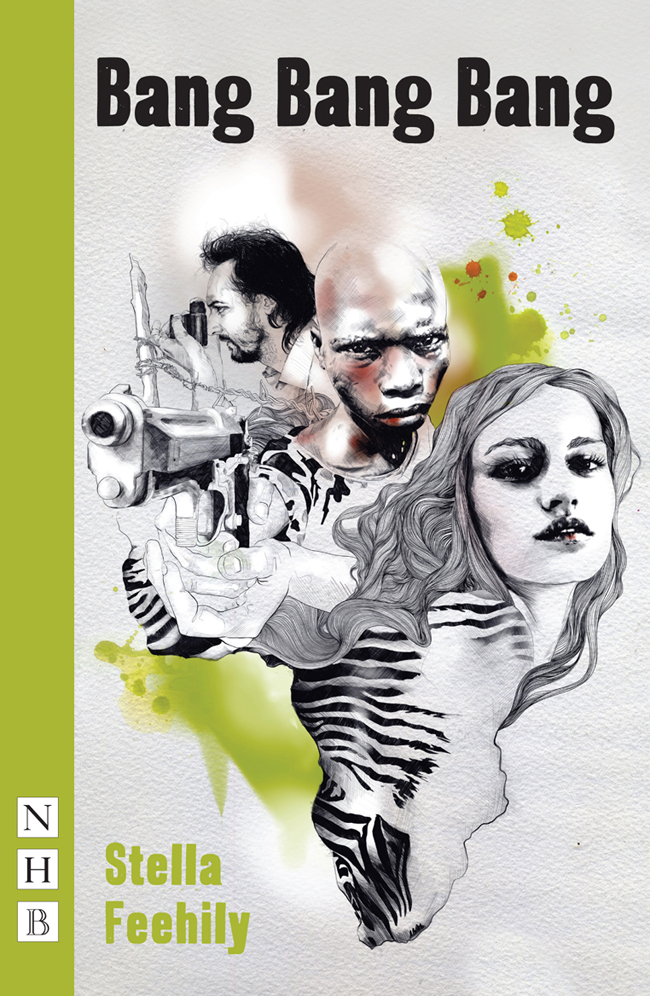 Note on the Text

Bang Bang Bang
was produced by Out of Joint and first performed at the Octagon Theatre, Bolton on 5 September 2011. The production subsequently toured around the UK. The cast was as follows:

In December 2008, during my second time working as a reporter for the Irish Times in Eastern DRC, a moment of culinary surrealism among the drunken soldiers and the child killers caught me by surprise.

In Lushebere farm, about six kilometres outside the commercial centre of Masisi in North Kivu, I watched as Muda Hikiamana wrapped two rounds of cheese and examined forensically the $5 dollar note handed to him. I'd stumbled upon one of the remotest commercial cheesemakers in the world. He also happened to be operating his business in the middle of a war zone, surrounded by four different militias and thousands of displaced persons. Through a local contact, I'd been told to wait there for General Edmo Gandi, from the FDLR militia group, one of the most feared and despised rebel groups in existence, made up of some of the perpetrators of the Rwandan genocide in 1994 when one million Rwandan nationals were killed. In any circumstances, it would have been bad manners to leave without sampling the produce. Behind several disused buildings, Muda, the cheesemaker opened up a large store room where hundreds of rounds of Goude cheese were stored in rusting shelves, ready for shipment all over central Africa.

The factory had been there since 1974, and the land was leased from the local clergy, who took a sizeable chunk of his profits in return. In so far as possible, the business had operated from then until now, despite the continuous cycles of violence that have raged in this province of Eastern Congo. In the late 1990s, following large influx of Hutu fighters from Rwanda, many of whom would later form the Forces Democratiques de Liberation du Rwanda (FDLR), the factory ceased production, re-starting again in 2001. There were temporary stoppages also when the CongrÃ¨s national pour la dÃ©fense du peuple (CNDP) â the band of mainly Tutsi militia under the command of renegade General Laurent Nkunda â made advances in the region in recent years. âMy grandfather and my whole family worked in this factory,' Muda told me. âThankfully the machines have not been stolen following each round of fighting so we have been able to re-start. From here, the cheese goes to Goma, and then onto Rwanda, Kinshasa, Uganda and all over Africa.'

When I visited in 2008, Masisi was under the control of the Congolese army (FARDC), the FDLR and various other local militias, while the UN's MONUC force also maintained a
battalion on a hillside overlooking the area. At night, rifle fire could be heard on the hillsides outside our compound and the army were a largely inebriated and ill-disciplined bunch, in contrast to the rebels, who could be seen marching through the streets at dawn training child soldiers. Fourteen-year-olds in Eminem T-shirts and Nike runners manned border crossings or carried RPGs through the forests. There was a Mad Max feel to the whole area â at one point a sixty-kilometre journey took two days to complete, such were the security concerns. Cheesemaker Muda told me, proudly, there were ten employees working for Goude cheeses, producing one hundred and five rolls a week, which generated revenues of $2000 a month. Like any obsessive food producer, when I asked Muda what ingredients made his cheese so sought after, he remained tight-lipped, âAh, that is a professional secret,' he said. I casually remarked that Ireland did alright on the cheese front too. âOurs though is the better quality.'

The real reason for me to be at this farm was not to sample cheese but to try get an insight into the minds of the rebel commanders and conduct a face-to-face interview. It was, in hindsight, a precarious position, and we had to make a judgement on whether or not our contact was trustworthy when he said the rebels would speak to us and guarantee our safety. As we chatted, my driver pointed in the direction of a laneway where we'd come from. Three khaki dressed rebels with AK-47s spread out along the road, and signalled for us to shadow them down a narrow path.

I was conscious too that I was about to shake hands with one of several manifestations of evil operating in this perpetually aggressive part of the world. These rebels had fled Rwanda after the genocide, many of them having committed horrendous multiple acts of murder. They were now involved in a proxy war the world had continued to ignore, and which still raged over a decade on. I wanted to know what his role was in the Rwanda genocide and whether it was true the rebels were now being funded by other African states with vested interests in an unstable Democratic Republic of Congo.

So, what does a killer look like? The ironically named General Gandi was wearing a Bush Tucker Man type hat and carried a large walking stick. He was well fed, attentive and thorough. Before sitting down on a grass embankment, he asked for a list of questions, which he then methodically went through. Most he
answered in a roundabout way. His forces were fighting to be allowed back to Rwanda and their struggle went back as far as the 1970s he stated. âThe Rwandan government's goal,' he said, âis to come and conquer North and East Kivu. They are interested only in diamonds and gold.'

We talked at length â he even posed for photographs. His English was impeccable and he reiterated over and over that he was simply a freedom fighter caught up in a struggle for land. His people were displaced. His role was to lead them home.

Only two questions he wouldn't answer â who funded his rebel group, and why exactly did he have to leave Rwanda so abruptly in the 1990s?

Brian O'Connell is an
Irish Times
journalist, author and broadcaster.

A Chronology of Key Events

1482
Portuguese navigator Diogo Cao becomes the first European to visit the Congo; Portuguese set up ties with the king of Kongo.

1879â87
Leopold commissions Stanley to establish the king's authority in the Congo basin.

1884â85
European powers at the Conference of Berlin recognise Leopold's claim to the Congo basin.

1885
Leopold announces the establishment of the Congo Free State, headed by himself.

1908
Belgian state annexes Congo amid protests over killings and atrocities carried out on a mass scale by Leopold's agents. Millions of Congolese are said to have been killed or worked to death during Leopold's control of the territory.

1961
February â Lumumba murdered, reportedly with US and Belgian complicity.

1965
â Kasavubu and Tshombe ousted in a coup led by Joseph Mobutu.

1973
â
74
â Mobutu nationalises many foreign-owned firms and forces European investors out of the country.

1989
â Zaire defaults on loans from Belgium, resulting in a cancellation of development programmes and increased deterioration of the economy.

1990
â Mobutu agrees to end the ban on multiparty politics and appoints a transitional government, but retains substantial powers.

1991
â Following riots in Kinshasa by unpaid soldiers, Mobutu agrees to a coalition government with opposition leaders, but retains control of the security apparatus and important ministries.

1994
â Mobutu agrees to the appointment of Kengo Wa Dondo, an advocate of austerity and free-market reforms, as prime minister.

1996-97
â Tutsi rebels capture much of eastern Zaire while Mobutu is abroad for medical treatment.

1997
May â Tutsi and other anti-Mobutu rebels, aided principally by Rwanda, capture the capital, Kinshasa; Zaire is renamed the Democratic Republic of Congo; Laurent-Desire Kabila installed as president.