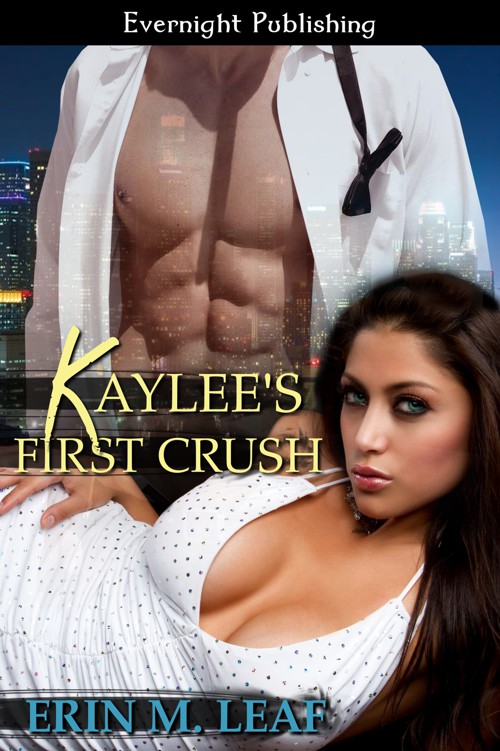 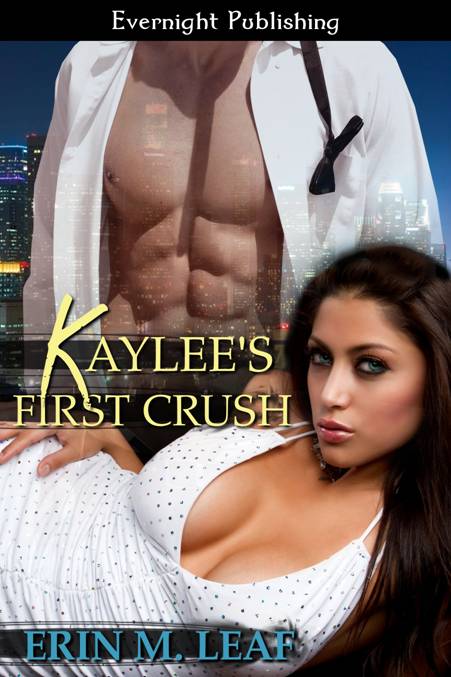 WARNING: The unauthorized reproduction or distribution of this
copyrighted work is illegal.

No part of
this book may be used or reproduced electronically or in print without written
permission, except in the case of brief quotations embodied in reviews.

For my husband: my first
and last crush.

Kaylee startled
from her light doze, groaning as the muscles in her back protested the hard
airport chair. She’d been dreaming about
him
again: the delicious Mr.
Valtree. He’d been her English teacher in her last year of high school and her
first crush, so yeah, he’d been a big influence in her life, but dreaming about
him five years after graduation was just ridiculous. She was twenty-two now!
She had two college degrees! She rubbed her eyes. Clearly, the amount of time
that passed didn’t matter. The man had made a hell of an impression on her
young mind.

You and all
the other girls in his class, and probably a few of the boys, too
, she thought, amused. He had to be at least in his mid-thirties
now. She closed her eyes in an attempt to capture the remnants of her quickly
fading dream. He’d been smiling at her, she recalled, warm brown eyes crinkling
at the corners. They were somewhere hot, maybe at a tropical island or a
resort. He’d had his shirt off, like that one time right before graduation when
the air conditioner at school had broken. She’d walked into class early to find
him wearing a skin-tight undershirt while eating his lunch. He’d draped his
dress-shirt over his chair. Beads of sweat trickled down his hairline.

Kaylee smiled
to herself as she abandoned her dream and instead remembered the look of
surprise on his face when he realized he was no longer alone. She could still
recall with perfect clarity the dusky outline of his nipples beneath the thin
fabric.
The sexy tendrils of hair under his arms as he stood
up.
The way he’d left the top button of his pants open, probably so he
could quickly and neatly tuck his shirt back in before class. He’d smiled at
her then, too. He hadn’t seemed at all bothered that she’d caught him with his
pants undone. She’d been mortified and stopped in her tracks, frozen with
embarrassment, but he’d taken her entrance in stride.

“Kaylee!
You’re a little early,” he’d
said, grabbing his shirt and putting it on. He left it
open
,
tantalizing her with glimpses of his chest, but buttoned his pants.

Kaylee had just
stared at him, mouth open. She couldn’t move.
Couldn’t speak.
Just the suggestion of possibly catching a glimpse of his underwear had her
flushing from head to toe. His pectoral muscles had flexed in a most amazing
fashion as he moved his chair away from his desk. She remembered that had been
the day she’d broken her glasses and had to tape them back together at the
nose. She’d been trying to grow her hair out of a horrible haircut, and to make
matters worse, none of her clothes fit right because her mother didn’t have the
money to buy her the right sizes. She’d always worn her sister’s hand-me-downs.
Amanda was a lot taller and thinner than Kaylee and her clothes looked terrible
on her. No doubt about it, she’d been a nerdy, ugly mess her senior year of
high school.

At least now
your clothes fit,
she mused.
You may not be
skinny like Amanda, but your curves aren’t hideous. They just seemed that way
back then when you were trying to cram double-Ds into your sister’s
sweatshirts.
Even so, she squirmed on the airport chair, remembering how
embarrassed she’d been. How aroused.

Mr. Valtree had
been the hottest teacher in the school. All the girls flirted with him, not
that he ever responded to any of them. There was never even a hint of
impropriety in his manner or dress. He’d been the perfect teacher, the perfect
gentleman. He always wore a shirt and tie, almost as if he knew how attractive
he was and didn’t want to provoke the girls, yet that day, there he’d stood,
half-naked right in front of her. She hadn’t known what to do with herself, so
she’d just stood there, wringing her hands like an idiot.

You wouldn’t
know what to do with him now, either
, she told
herself, suddenly irritated. She’d never had a boyfriend. The few dates she’d
been on had been unmitigated disasters.
You may be a college graduate, but
you’re still an introverted nerd.
A virgin.
She
frowned, angry at herself for thinking about it. She’d been trying to act more
confident lately. She had a job all lined up in New York, for God’s sake. She
was an adult now.
So what if you’ve never had sex? That’s doesn’t mean
anything, not really.
She slumped down further, trying not to remember what
had happened next, but the images ran through her mind anyway. Ugh. Remembering
the rest of that particular day was never pleasant.

“Kaylee?”
Mr. Valtree had asked
gently. He’d always been super-nice to her for some reason. When the other kids
made fun of her presentations, he’d praised her creativity. When she’d frozen
up during the class discussions, he’d always made certain to wait for her to
speak, never pressuring her. Not only was he gorgeous, he was also the kindest,
most patient man she’d ever met. He’d been her favorite teacher. Her crush on
him had assumed epic proportions and clearly hadn’t lessened in the five years
since she’d last set eyes on him.

Which
doesn’t say a lot about your self-respect, Kaylee
,
she thought to herself. She sighed, remembering the rest of that encounter, the
most horrifying experience of her life to date. It had been even worse than her
dates in college. Worse than the time she’d walked out of the girls’ bathroom
with toilet paper hanging out of her pants.

“Kaylee?
Did you want to talk about your
paper? It was excellent,” he’d said. Inexplicably, he’d licked his lips and put
his hands in his pockets. Helpless to resist the temptation, Kaylee’s eyes
followed the lines of his arms and landed on his groin. What she saw there had
her gasping, certain she was about to have an asthma attack, even though she
hadn’t needed her inhaler since third grade.

Mr. Valtree
has an impressive erection
, she remembered
thinking, shocked, as she stared at the outline of his cock, clearly visible
through his pants. She’d been unable look away and utterly certain he didn’t
know she could see his arousal—why else would he have stuffed his hands in his
pants? He’d probably been trying to hide it from her. She remembered him
tilting his head nonchalantly, waiting for her response as though she couldn’t
tell he dressed impressively to the left.

She’d taken one
look at his face and run the other direction.

Of course, for
her, successfully fleeing the room hadn’t been an option. As she’d whirled
around, she’d tripped over her own feet and sprawled on the floor, legs spread.
That hadn’t been the worst part, though, oh no. The crowning achievement of her
complete and total humiliation had been the sound of something ripping in her
crotch. She’d split her pants open right in front of handsome Mr. Valtree. She
hadn’t been able to look him in the eyes for the rest of the year, not even
when he’d handed her the award for her senior essay at graduation.

Then, as now,
though, she couldn’t help wondering: why had he been so aroused in the middle
of the day? While eating a sandwich?

Kaylee snorted
to herself and opened her eyes. She’d never find out the answer to that
question. And she was hungry. She wondered if she had enough time to grab
something to eat before she had to board her plane. She rubbed her face
tiredly,
then
squinted at the display for outgoing
flights. She didn’t think hers was scheduled to leave Chicago for a couple
hours yet, so she could probably get a sandwich—

“Crap,” she
said out loud, sitting up abruptly. The list of numbers across the screen
showed
Cancelled, Cancelled,
Cancelled
…

“Just my luck,”
she muttered, disgusted, all thoughts of her dream about the gorgeous Mr.
Valtree dissipating in a rush. Her plane was grounded. She looked outside. It
was nighttime, but there was so much snow on the ground and in the air that the
light from the airport reflected through all the white. She could see workers
scurrying around the luggage carts, trying to get them to move on the icy
tarmac. Even as she watched, one of them skidded and landed face first in a
snowdrift. Clearly she wasn’t going anywhere tonight.

The people
around her were wearily gathering their luggage, heading for the terminal exit.
Kaylee stood up, wondering if would make more sense to stay put, when a voice
on the loudspeaker announced that the airport would be closing in one hour due
to the winter weather that had deepened into an unexpected blizzard.